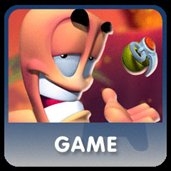 Team17 Software opens up a big can o' worms onto the PlayStation Network.

Worms for the PSN is the latest in a long line of titles in the series. Each game plays largely the same, with teams of worms using all kinds of weapons and tools to take each other out. Despite this, the series as a whole has a unique style that helps to make it one of the most popular games in its genre.

Like all other Artillery games, Worms is all about simplistic physics-based gameplay. Your team of four worms, as well as the worms of your enemy, is placed on a 2D island surrounded by water. Each turn you get control over a worm and are allowed to move left or right and use a variety of tools and weapons to take out the worms of your opponent. The goal of the game is to decrease the health of your enemy’s worms to zero by hitting them with shots from your bazooka or other weapons. One of the easiest ways to kill your opponents is to create an explosion that hits them into the water. Anyone hit into the water is killed instantly so it is important to try and kill the enemy with this tactic while simultaneously making sure that you yourself are not in danger of the same thing.

One of the things that really helps to make Worms unique among the other members of this genre is the large number of weapons available to you during your turn. The bazooka is your main weapon. To fire the bazooka you press the up and down direction on the D-pad or the analog stick until the reticule is pointing in the desired direction and then press the X button and hold to the appropriate power. The arc of your shot is greatly affected by wind as well as the direction and power which you choose, so it is important to keep track of the wind direction as well. Once shot the bazooka will explode on impact, taking with it a large chunk of the land on which everyone is standing as well as propelling anyone in the blast radius far into the air.

The bazooka is only the beginning of your arsenal. Among your choices is average weaponry such as the grenade, which bounces on impact and only explodes after its timer has finished, as well as extremely strange weapons such as the super cow which you send flying into the air using the X button and then direct using left and right on the D-pad. The large array of weaponry gives you a lot of options for any given situation. There are also tools that can be used to help you traverse the terrain during your 60 second turn before you fire a weapon. These include a teleportation device that will take your turn, but instantly puts the worm wherever you need him to be, and a ninja rope that you can fire into any terrain and then swing your worm on the rope as well as climb up and down it. The tools allow for a bit more strategy such as ninja roping up to an enemy and leaving dynamite next to them before backing away, or if I particularly want to safe guard a single worm I might put a girder up between them and the enemy, or use the jackhammer to drill that worm into the ground where it’ll be much more difficult to hit with a bazooka - though a well placed grenade will decimate him.

Visual presentation in Worms for the PSN is much the same as any of the other games. Your worms are tiny little bug eyed creatures that murder each other on a cartoonish setting. Everything out of the game looks like it could come right out of a Saturday morning cartoon, the only three dimensional aspect of how Worms looks is the background to your battlefield. There are six different styles of map that simply change the look of the terrain you are fighting on as well as the type of objects that are thrown onto the map to give the hills and valleys some further variety. These maps range from a fight in England with Big Ben in the background and gigantic (to the worms) umbrellas and pipes strewn on the map, to wars in hell with fiery pits in the background and pitchforks and scythes acting as the objects. All of these look nice, but I feel that only six different styles isn’t enough to keep things from getting repetitive aesthetically, and everything has a very simple look about it that will please long time fans of the series, but isn’t impressive in any way.

The music in Worms works well with the different styles of map, and each map style has its own soundtrack to go along with it. Unfortunately I quickly noticed the songs getting repetitive and there just wasn’t enough variety to keep it from getting stale. One aspect where there is a large amount of variety, however, is in the voice-overs. Whenever one of your worms fires a weapon or gets hit by one they will blurt out a phrase or two. When you customize your worm army you are allowed to change the name of your team, the name of each worm, the style of tombstone they leave behind upon their demise and you can choose between around 40 different voice-overs for your worms. These range from the squad sergeant that I chose for my own team to robotic worms or worms from a plethora of different countries around the world. All of these voice-overs are quite funny and help to give the game its trademark humor.

Gameplay in Worms is fun, but it felt lacking after playing other versions of Worms on the PC. There isn’t quite the large array of weaponry from previous games and some of the more obscure weapons such as grannies and napalm air strikes are sadly missing. There are also only five game modes which you can choose from. You can create your own game mode, but this only really allows you to change the time limit of turns and matches as well as the availability of certain weapons, which left me sorely missing the ability to change the number of worms allowed on each team and their starting health. Both of these omissions make Worms on the PSN more of a bare bones experience than past Worms games, such as Worms World Party, but it is still an enjoyable experience.

Worms will only set you back 13 dollars, but there also isn’t a lot of variety in what you can do. As previously mentioned there are only five different game modes and these only differ based on the availability of weapons and the time limit for actions. There are three tutorial missions and a number of single player challenges, but these challenges only amount to fighting teams of enemy worms of slowly increasing AI and starting health. There is local as well as online multiplayer, and the online multiplayer only lags in between turns, which doesn’t affect the actual gameplay whatsoever. Even with the addition of multiplayer, there still isn’t a great amount of gaming to be had in Worms, as there just aren’t enough options to keep things from becoming redundant.

Worms for the PSN feels like a lack luster port as a whole. There are many options and weapons missing that were included in other versions of Worms. The gameplay is still the simplistic fun it has always been and the large number of clever voice-overs is great, but there just aren’t enough options to keep things from getting repetitive, and the presentation is showing its age. I would suggest this title only to those who are curious about what type of game Worms is and want to play with friends from the PSN friend list, because otherwise there are better Worms games out there for you to choose from.