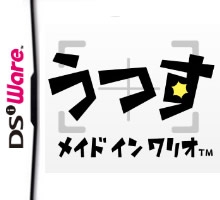 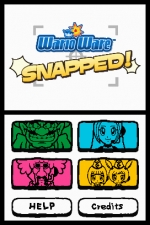 Nintendo DSware launches with a short yet memorable experience.

Nintendo launched the brand new Nintendo DSi on April 5, 2009 with four downloadable games. WarioWare: Snapped is one of those games and it is tasked with some major responsibilities. Nintendo hopes to use this title as a showpiece for both the DSware download service and the new features of the DSi. Leaving this task in the capable hands of the Wario Ware franchise was a brilliant move on Nintendo’s part, but the experience is just a tad too succinct.

WarioWare: Snapped follows the same ethos its predecessors did. The game consists of mini-games requiring the player to perform many different ‘non-button’ actions in a small window of time. The twist in this release is that the player-facing camera - new to the DSi - and the microphone are the only input devices used. The photo technology has been seen before with the Gameboy Camera and the Eye Toy, but with the DSi the portability of the Gameboy Camera and the capability of the Eye Toy are wonderfully combined into one device. The camera is very responsive when lighting and player position are adequate. However, there are many times when nuances in lighting and even position will completely break the game making for a frustrating experience, but these situations are not the norm.

The game features four different modes. The first three modes are single player excursions with varying mini-games of increasing difficulty, albeit never achieving a truly challenging level. All of the single player modes have five different mini-games, each just as imaginative and quirky as the series is known for. If my math is correct that adds up to 15 separate mini-games with only one or two that seem to not work as well as the others.

To start a game, first the camera will need to be calibrated. This is achieved by creating a photo with an outline of a face and right hand with open palm. The player must align his or her face and right palm with the outlines. The game will then calibrate the lighting and the player’s silhouette. Once complete the game will take a snap shot and prepare the five mini-games associated with the mode in random order. All the games will require a gesture, movement, or mic interaction to complete the requested task. Before each mini-game starts a screen will pop up that will show how the player should align the silhouette. I can't stress enough how well these games embody the frenetic fun of this charming franchise. The games are great and will also be enjoyed by others, especially girls (wink wink).

The fourth mode is a nifty two player mode that follows the same rules as the other three. The two players will play on both sides of one Nintendo DSi longwise (book mode) and will complete mini-game tasks simultaneously. This mode is very much appreciated and adds some strong value to the $5 digital package. Another nice touch added is the fact that after playing through a mode the game records the player’s antics and makes a short video, then posts it on the title screen. These are always a joy to watch and share, but oddly enough they cannot be saved to internal memory which seems like a huge missed opportunity.

WarioWare: Snapped has a presentation that is reminiscent of its predecessors. The 2D cel-animation style makes its return and looks every bit as comical as previous titles. The lack of animation however is really noticeable; this title uses a lot of still shots and minimum animation. It would have been desirable to see the same quality animation that previous titles had instead of the minimum effort shown here. The music is also uninspired. There are a total of two or three different tracks, each featuring an annoying carnival theme. However the worst problem afflicting Wario Ware: Snapped is its brevity. The game is really fun and charming and succeeds in both showing off DSware and the DSi hardware, but it’s over too soon. Even at the $5 (500 Nintendo Points) price tag it seems unsatisfying. The gameplay could have been extended to include many more mini-games and having some kind of unlockables or collectables would have been nice.

The Nintendo DSi coupled with the DSware platform is very promising. WarioWare: Snapped proves that interesting software can be made available quickly while the innovative design shows off gameplay that only the DSi can provide. But, with a short and unsatisfying length and minimalistic approach to presentation, Nintendo also ironically shows some of the havoc that DSware can unleash on the masses. At $5 (500 Nintendo Points) this game is priced a little high for everything included in the package, but it is very fun while it lasts.