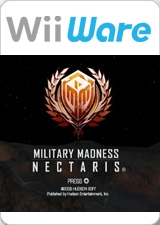 Presentation - 8.5
Gameplay - 9.0
Value - 9.0
A turn based strategy game with on-line multiplayer, a good sized collection of single player levels and all for 1000 points.

The first thing you need to know is I am a fan of turn based games, there are far too few around for my taste so I am always happy to see another one. I missed military madness first time round but god the VC version a few months back.

The game is an update of the original with the basic set of levels being identical, with updated graphics and sound. The game play is as you would expect from a war strategy game – to defeat your opponent by defeating all their units or capturing their base. There is a range of units at your disposal from weak fast “rabbits” and “Hunter” air units to the fixed place “Atlas” they is a devastating ranged cannon.

Once you have begun to work out the best way to use your units you then need to think about the terrain with defence bones and movement restrictions that play an important role. Other tactics you must employ are where to rush and take over factories or sit back and take a defensive stance.

So far if you have played the original you may not see a point to getting the Wii Ware version put here is the thing. On-line & Local multiplayer, something I have found extremely rare on a turn based game, it is fantastic, and this is where you can really test your skill. First there are the open multiplayer games for 2-4 players with co-op options. On the multi player you get a new unit the commander who you can assign skills to fit with your style of play. Each player starts the game with a clock and once you run out of time you can move any more units so time management is vital. I have only played a few times so far so have not seen all the maps ( now it’s out in the states I hope there will be more on-line players ) the ones I have played are well balanced and can be won even when you don’t get the first turn.

Secondly there are ranked one on one games, the same clock system is in place so games don’t drag, and if your opponent is wasting time it will come back to bit them at the end of the fight. Again there are a number of maps and again the balance is good although there is a little advantage to getting the first turn.

Round up – If you like turn based games, I can’t see why you would not like this. If you don’t play on line and have the original then maybe give it a miss.