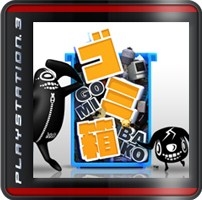 Dealing with trash has never been so fun. Not that that is a huge accomplishment.

When I heard about Trash Panic - a title in which the goal is to pack as much trash as you can into a single container, I figured that my days as a packer in a shipping company might finally come in handy, and the videos had enough of that crazy Japanese charm to get me interested. What I found was an interesting take on Tetris-like gameplay using actual objects and physics.

Trash Panic is a game of special awareness. Your goal is to get rid of a certain amount of trash to complete the level. Each piece of trash is presented on a conveyer belt of magnets that allow the trash to hang off in easy view. How exactly these people made magnets that can pick up wooden chairs is a mystery, but I can’t expect realism out of every game I play. Once you are given a piece of trash, you can move it to the left and right using the analog stick, and it slowly moves down on its own like in Tetris. You have a couple of options including putting one piece of trash in your open spot where you can hold something indefinitely, so if you don’t want to deal with that particular trash because it is too large or has other annoying qualities you can place the item on hold by pressing L1. This doesn’t get you totally free however, because if you had something on hold already you will now have to deal with that instead. If you find a place that would fit the item well you can press R1 and the item will fall into place. This isn’t usually the best idea though, and most commonly you will press the Triangle to send the trash smashing downwards.

The reason you are likely to send most of the trash smashing downwards is that most of the trash can be broken up into smaller pieces which are a heck of a lot easier to deal with. Smashing and breaking apart the trash is the first trick you learn towards decreasing the space that the trash will take up, but this can only get you so far. You are also able to incinerate, biodegrade, and simply blow up the trash that needs getting rid of. Incineration is the first of the three you’ll learn about. Everything burns; it is just a question of the temperature you have to work with. Just like in real life you don’t just throw a match onto a log. To have a successful fire in Trash Panic, you need to start with something easily burned like toilet paper or a teddy bar and let the fire heat up. A gauge on the left side of the screen tells you the temperature inside the trash can and the higher the temperature the more stuff you can light on fire. The easiest way to light most everything in the trash can on fire is to get a decent start going with some kindling and smaller wood pieces and then close the lid of the trash can with the L2 button. While the lid is closed you won’t have any trash coming at you and the temperature inside will steadily increase, but there is also an oxygen gauge which will decrease as the fire consumes it. Let the oxygen meter hit zero and all your hard work is for naught as the fire will be snuffed out.

Another option you can use is tossing a few incendiaries in with your fire. A small bomb goes a long way to clearing the trash can, though it probably isn’t the most environmentally friendly method and you will have to be given the bombs as trash to have any to use. Bombs can also extinguish fires you had starting up, so it isn’t always the best idea to use them. The last option for getting rid of trash is to use a decomposition ball. By putting this little ball in the trash can and then letting it absorb some water, you can speed up the rate of decomposition and spread bacteria which will eat away your trash. The bacteria will die after a certain amount of time, if it is smashed, or if it absorbed oil instead of water so it isn’t an indefinite solution. The other important thing to watch out for is special items which should not have been thrown away such as a wedding ring or a particularly expensive piece of sushi (what you plan to do with that after you fish it out of the trash I don’t want to know). If these items are destroyed you are punished with a rain of gold bars or empty oil drums that will make it almost impossible to complete the level, but if you can get the special item to the bottom of the trash can unharmed a small creature will take it out of the can for you safely and another creature will reward you by taking the trash you have on hold and replacing it with something useful like a bomb or a samurai sword (smashing them point down is good to break items apart).

The use of fire, biodegradables, smashing, and special items means there are a lot of things to think about while playing Trash Panic. You have to try to plan ahead to set up burnable items together without letting them get submersed in water, or feed the decomposition ball with water without letting it get touched by oil that you were waiting to use to light on fire. It’s a delicate balance that can often make it feel like there was really only one solution to the puzzle, which is not a great design because the physics of breaking things apart can make the exact position of the trash in your can feel a lot like luck. It is still quite enjoyable even with the issue of luck, however.

There are three different difficulty modes for the main game which requires you to play through all five levels in a row. I beat the lowest difficulty (yes I suck) and got to the second to last level in the normal difficulty and that took me about 5 hours of time, so there is a decent amount of gaming to be had for five dollars. There is also an endless mode for each level where you can play until you are disqualified by dropping three pieces of not yet smashed trash, and three missions that require a different strategy compared to the normal game. There is also a bit of replayability based on the scoring which differentiates between playing Eco and playing Ego. Playing Eco is all about biodegrading and spilling as little smashed trash as possible while Ego is about burning and exploding to get rid of everything. Usually you will just try and use whatever you can, which will lean you far towards the Ego side, but if you really want a challenge you can try to win while staying Eco friendly.

Trash Panic looks pretty good, but isn’t by any means a technical marvel. I really enjoyed how each level scaled up the size of what you were throwing away. You start with a lowly office trash can trying to get rid of staplers and mugs, after a bit of work you’re throwing away sky scrapers and oil drums into a giant trash can. This helped to make each of the five levels extremely unique since each level has a different set of items and a different strategy required to pass. One really big problem with the visuals is that sometimes the next item will appear in the black bar of the wide screen where I can’t see it. This problem drove me crazy and I could not find a solution for the life of me. It wasn’t a deal breaker since you could just wait for the item to drop down a little but it always screwed up my train of thought which is extremely annoying in a puzzle game. The music was catchy but there wasn’t enough variety to keep it from getting repetitive. The sound effects were very satisfying as you could hear the crunching of a shelving unit or the smashing of a light bulb.

Trash Panic can be fun but it has a number of issues that keep it from being a really good title. The random nature of breaking apart items brings a luck factor that can be annoying in a puzzle title, items showing up in places I cannot actually see, and the unimpressive visuals bring this title down; but, in its defense, it has a lot to offer for five dollars. If you are hankering for a puzzle title, I suggest you give Trash Panic a try; it is a decent amount of fun for a budget price.