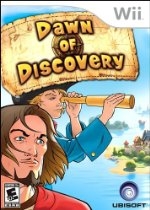 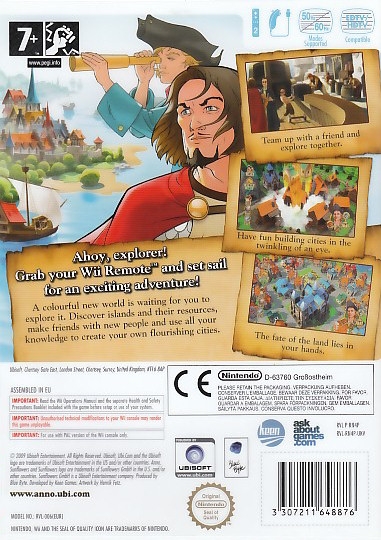 We review the latest Anno game, this time for the Wii.

Anno: Create a New World (also known as Dawn of Discovery across the pond) is a top-down strategy/simulation game which shares similarities with the Settlers series, or even the Sim City series. In essence the core of the game revolves around city building, resource management, and exploration. As a series with strong ties to the PC, and a genre that’s not exactly famous for its compatibility with consoles, Create a New World has been ‘built from the ground up’ for the Wii, as the cliché goes.

The story mode follows the adventures of a prince who is challenged by his father to save their country from the grip of famine. It’s important to note that this is not your typical story mode. It is essentially one lengthy tutorial that is broken up and driven on by a cohesive storyline. At no point do the training wheels ever really come off, and every new task you have to complete is underpinned by a new gameplay mechanic that you need to learn in preparation for the continuous play mode. However, it is crucial to the success of the game that there is a story, otherwise this would feel like nothing other than the 10 hour long tutorial that it is.

Your mission is to search for new fertile lands, send back important resources to your homeland, discover new technology which can then be used to help your people, and defend your lands from the threat of invasion. It is a predictable story. There's an innocence and naivety to the story which makes it very much a family friendly title; so for example conflict is never dwelled upon and is always presented as a means of last resort, altruism and benevolence are always shown to win the day, and there’s a lesson of morality underpinning all of your actions.

When you begin each level your most immediate priority is to develop one or more islands. You start off with only a small group of pioneers who live in humble homes and fish for a living. Gradually you will make money, gather other resources essential to purchasing new and more advanced buildings, and explore the tech tree. This allows your civilisation to advance and soon those humble pioneers turn into settlers, and those settlers turn into citizens, and so on.

There are of course challenges along the way. Your people require their needs to be met before they are willing to pay the highest rates of tax and before they are willing to upgrade to the next cultural milestone. Each new stage of civilisation will bring with it more elaborate and expensive demands. For example, the initial pioneers require only some fish, milk, and eventually a chapel in order to upgrade to settlers. However, the settlers that replace them are much more demanding, for example they require more advanced buildings, clothing, and a much greater supply of food. This cycle is repeated until you reach the very final stage of civilisation, although getting that far will require a lot of patience and time management. Furthermore, you will also have to deal with all sorts of threats to your civilisation, from budget pressures to fires, plagues and even war.

The average island you build upon is quite small, only taking up a couple of screens. Soon the demands of your people require much more space on which to build, and so you will find yourself exploring the surrounding ocean looking for new islands to annex. The downside to this is that keeping each of your islands happy when you have a small empire of islands on your hands can be annoying, particularly as their demands constantly flow in, but the game generally succeeds in maintaining a steady pace and keeps you actively engaged at all times. So, with a few exceptions, you won’t be bogged down in charts and spreadsheets; instead you’ll be constantly building and reacting to challenges as they pop up.

The control system is simple and easy to use. The Nunchuck is used to scroll around the map, the B button is used to bring up the building menu, and the A button is used to select the item that the cursor is pointed at. These are your basic controls; then over the course of the game you’ll be introduced to various short cuts and more advanced controls, but at every stage they are fully explained and easy to grasp. To illustrate the basic controls, pretend for example that you want to build a house. Simply press B to bring up the menu, click on the house icon with the A button, then move the cursor with the pointer and Nunchuk to determine where to place the building, and finally press A once again to place the building on the island.

The one instance where the controls could have used more work is in controlling ships and waging war. Moving your ships around the ocean requires you to click the ship and then drag it around, much like you do when placing buildings. However, given the sheer size of the ocean and the inadequacy of the markers that come up on your screen to indicate your location, you will often need to zoom in and out of the overworld map in order to work out exactly where you need to go. There is an option to set a waypoint on this map, but because you need to watch out for enemy ships as you navigate the ocean this can be a risky option, and so you may need to manually take back control in order to avoid them. Another issue that makes the ship controls quite fiddly is that you can only control one ship at a time, so you need to repeat this process several times if, for example, you’re setting up an invasion force. There’s no real reason for this control limitation. It would have been much better if you could simply draw a box around all of the ships you wanted to control with the pointer, but alas you cannot.

Warfare is certainly one of the most underwhelming aspects of the game. Firstly, the point above about not being able to control more than one ship also applies to battleships, so any given sea battle amounts to little more than a 1 v 1 shoot-out with an enemy vessel. Land warfare isn’t much better either; firstly, the controls are more complicated than necessary, and secondly land warfare just amounts to sending troops from one fortified building to another, waiting for the battle inside that building to end (a battle which you never see), and then moving on to the next building. I certainly understand that the focus of the game is on civilisation building, friendly exploration, and resource management; not on waging war. But in that case why include warfare at all? Its inclusion feels out of place and wholly inferior to the rest of the game.

Anno has a great art style. The world is bursting with colour from the islands and surrounding ocean to the buildings themselves. Each building is coupled with an animation - for example, build a pioneer’s house and the owner of that house will wander around outside, or build a dairy farm and the cows will graze in the field attached to the house and the farmers will cart the milk off to the nearest market place. Build up an entire city and these animations add a welcome sense of activity to the world. You could conceivably have a group of islands numbering double figures and you’ll be able to move the camera about the world without any loading screens, a pretty impressive feet given that the level of activity described above will be replicated on each and every island. The graphics and textures are quite basic, but that’s to be expected for a game of this type, and that’s not to take anything away from the fact that this is a very pretty game.

The story is told through cut scenes, but unfortunately none of them are animated, instead they all consist of static images with voice-overs. I was surprised by how good the voice acting was, and despite the basic nature of the dialogue the lines are well delivered. Every line of advice you receive is voice acted. Although, as with most strategy games of this type lines are often repeated over and over again until you perform the action the computer demands of you, and this quickly becomes annoying. One of the best aspects of the presentation is the music which generally consists of pleasant and soothing background tunes that superbly compliment the tone of the game.

Value is probably the game’s main weak point, although when it comes to replayability much will depend on how much you desire to repeat the same actions you’ve completed in the story mode again in the continuous play mode. The story mode itself should take a good 10 hours to complete, however, as I mentioned at the start of the review it feels more like a lengthy tutorial with a story tacked on to it than a fully fleshed out story mode. Nonetheless, for the most part it’s well paced and enjoyable, and if you’re a newcomer to the genre you should definitely play through it before moving on to the continuous play mode.

Continuous play does exactly what it says on the tin. The training wheels come off and you’re free to develop your civilisation as you see fit without interruption. You’re able to tweak the settings to your liking, so for example you can determine how big the world is, how much money you start out with, whether to include natural disasters, and so on. Here you put everything you’ve learned during the story mode to good use, and the pressure on your management skills is certainly heightened.

There’s no multiplayer, although there is offline support for two players with the second player very much taking a back seat, only assisting the first player in a very minimal way. Due to the limited role the second person plays, cooperative play is perhaps most useful for an adult helping and guiding a young child, for example, rather than for two players of equal ability playing together.

Anno: Create a New World is one of the most accessible strategy/simulation games of its kind on the market thanks to its simple controls, minimalistic menu interface, and genuinely helpful personal advisors. The graphics are colourful and vibrant, the voice acting is solid, and the music beautifully suited to the game’s positive tone. There are a few minor annoyances that could use some tweaking, and there is also a missed opportunity to provide more varied content. It’s certainly more suited to newcomers to the genre, rather than strategy aficionados, but there’s a challenge to be found here for anyone willing to give this good natured and charming title a go.