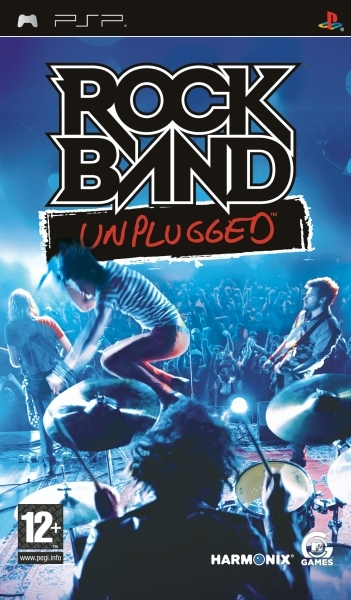 I was pretty excited to hear the news that the PSP would be getting its very own iteration of Rock Band. In a way Unplugged seems to harken back towards a more traditional take on the rhythm genre. There’s no peripheral, there’s a relatively simplistic control system, and no multiplayer of any sort (online or otherwise), though curiously there is a music store. That’s mostly what it isn’t, and for those of you who find either the idea of a peripheral or some form of multiplayer integral to a music game then this title is almost certainly not for you. But if you don’t care for the age of peripherals, and you quite like the idea of a purely single player focus, then Rock Band Unplugged might be the game for you.

The main focus of the game is obviously on the career-based World Tour mode (I’ll detail the other modes and extras towards the end of the review). Here you create and mould every single member of your band and tour around some of the major cities, building up your fan base, earning money and winning stars in order to unlock new songs, gigs, staff and cities. You get to spend the money you earn from these gigs on the band members themselves, and they’re all fully customisable, so you can select their attitudes, names, clothing, instruments etc.

When it comes to gameplay you’re presented with the familiar sight of notes scrolling down the screen towards you. All four instruments (bass guitar, drums, vocals and lead guitar) are present on screen and you’ll find notes for each one streaming down towards you one after the other. The idea is to press the buttons in time with the music as the notes fall to the bottom of the screen.  As soon as you’ve successfully completed the string of notes for the instrument you’re currently working on, you have to skip to the next instrument that has notes appearing on it. By successfully completing an instrument you’re granted a brief reprieve and that instrument will play itself for a while, allowing you to move on to the others. Make one small slip up, however, and you can find yourself being overwhelmed by notes streaming down all four instrument tracks, at which point you will have to work quickly to get them all in sync again before you fail the song. 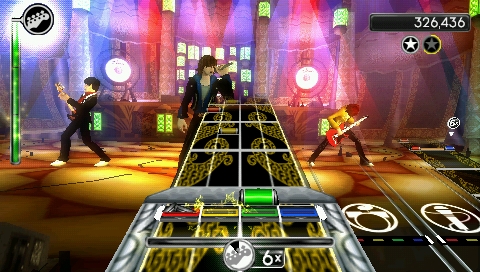 The default controls for the actual notes are Left and Up on the D-pad, and the Triangle and Circle face buttons. In order to switch between the different instruments, you simply press either the L or R shoulder button. Despite the fact that you aren’t strumming along, hitting some drums or singing to the music, you still feel like you’re at least influencing it, if not creating it. Each press of a button creates a note and when you really get into the rhythm of the note patterns you do get that feeling of making music. If you find yourself making mistakes and getting behind, the instruments that have notes streaming down the screen which you’re unable to deal with will die down and that section of the music will become almost inaudible until you rescue it (an interesting tactic I’ve used for tracks with horrible singing is to start failing the vocals in order to just listen to the music). If you completely fail an instrument or you start struggling to keep them all alive, you can press Down on the D-pad or the X face button in order to briefly rescue them, giving you a few more seconds to get back into the rhythm.

Despite the simplistic control design things still get extremely hectic and difficult on the two hardest difficulty settings. Notes will come down quickly and in complex patterns, and the need to keep switching tracks only adds to the frenetic nature of the gameplay. By having to play as the whole band you’re also introduced to different patterns of notes within the same song, so for example coming off a complex drum beat you may have to quickly adjust to the more mellow bass guitar patterns, and this switch-up makes the gameplay more varied and interesting than it would otherwise have been.

Graphically Unplugged doesn’t particularly shine. The instrument tracks are clean and sharp, ablaze with colours and activity throughout the course of each song. The backgrounds are quite simplistic, as they are in all Rock Band and Guitar Hero games. In that sense Unplugged follows in the footsteps of its console predecessors. As I mentioned above, all of the band members can be fully customised and there are plenty of different clothing styles and hair cuts to choose from. The band plays along in the background during the tracks, each member taking centre stage at the appropriate moment of the song when their instrument is the focal point, although their actions don’t seem to be entirely in sync with the music. The locales and stages are quite varied, there are plenty of them to work through and there’s a fair amount of detail to them. However, the crowd are entirely blacked out, so you only ever see silhouettes of crowd members cheering and waving. In short, don’t expect to be blown away by the visuals. 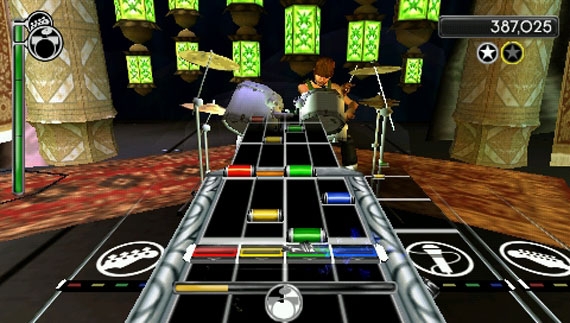 Obviously the sound is a crucial element of the game, and as you would expect it’s superb, with all 41 tracks being master recordings. When you use ear or headphones the tracks sound really crisp. Start failing an instrument and you’ll notice the song really change as the bass guitar, drums, lead guitar or vocals stop playing. The sound for the instrument you’re currently playing seems to come to the forefront as well, which helps you keep immersed in the rhythm and focussed on the instrument at hand.

In all, there are 41 tracks, an impressive number for a handheld title (it even compares favourably with the original Rock Band’s 45-song main set list). The complete set list can be found [url=http://www.vgchartz.com/games/gamesummary.php?id=32175]here[/url] and includes tracks from bands like Nine Inch Nails, The Killers, Foo Fighters, Nirvana, Bon Jovi, Smashing Pumpkins, Blink 182, Judas Priest etc. For me this is one of the best band lists I’ve seen for this sort of game. Usually there will only be a couple of bands that appeal to me but here I almost get into double figures, and I must admit to being pleasantly surprised by a few of the entries I knew little about, in particular ‘The Killing Jar’ by Siouxsie & the Banshees has quickly become one of my favourite tracks in the game. Despite a lengthy set list the very nature of this sort of game means that you’ll be repeating a lot of the tracks.  If you already own the previous two Rock Bands games and the whole host of DLC available for them then this is doubly the case as many of the tracks have been recycled from those releases.

There’s no multiplayer of any sort. In the case of handheld version of Rock Band the need for a multiplayer component is less pressing, but it’s still invariably a disappointment to find there isn’t one. Furthermore, there’s no convincing explanation for its absence, particularly given the PSP’s online capabilities. This disappointment could have been offset by the inclusion of a well crafted single player experience, but the career side of things is still not compelling at all, and this is something I think the developers have failed to tackle with all of the Rock Band titles. Despite the customisation options and the varied venues you get no real sense of being a band or of touring across the world. There’s no story and nothing to tie the World Tour mode together – ultimately it still feels like you’re simply playing one song after another without variation, and everything else you see and do is just a weak attempt to cover this fact up. 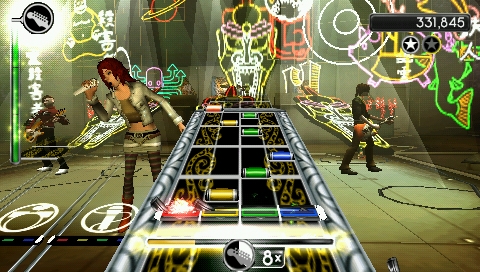 The World Tour mode should keep you occupied for well over 10 hours. Once you’ve finished all of the available gigs you can go back through them and attempt to improve upon your overall score and the amount of stars you’ve received for each song if you want. You can also continue to customise your band with all of the items you unlock. In total there are four difficulty settings to try out, and a nice training mode to help you get to grips with the control scheme.

Beyond the World Tour mode, there’s a Quickplay mode, which allows you to play any of the songs you’ve unlocked, and if you want you can also create a custom set list. There's also an extra feature that gives you access to all the songs on the disc at any time, although in order to encourage you to unlock them all in World Tour mode your progress cannot be saved while this option is selected. This is a nice touch, as it allows you to play a particular song you might have bought the game for without forcing you to grind through the career mode in order to unlock it, but at the same time it means you should still have an incentive there to unlock it for real.

There are two other minor modes which are worth briefly mentioning. First is a Survival mode, which challenges you to play a song where all of the instruments are throwing out notes for you to play at the same time. As the name suggests the aim is not necessarily to complete the song, but instead to just hold out for as long as possible. Secondly there’s a Warm Up mode, which allows you to play any single instrument from a track you want, so you don’t have to keep switching between all the different instruments if you don’t want to. 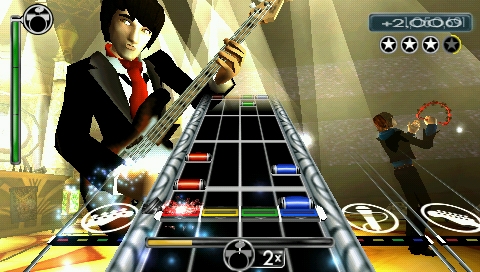 Finally, if you get bored with the 41 tracks included with the game you can download some more using the built-in music store. At the time of writing there are 23 songs available for download (one of which is free - 'Still Alive' by GLaDOS and Jonathan Coulton), and you can expect plenty more to follow over time. Each track costs $1.99/£0.99 though, so you might want to choose the tracks you want carefully (fortunately you can preview all of the tracks before purchasing).

Unplugged is a very good PSP rhythm game. A 41-song track list is an impressive number for a handheld music game, and almost all of the artists featured are big names. The sound quality is superb, the gameplay is addictive and engaging, the career mode is lengthy, and outside of that there are plenty of extras and options, from band customisation to game modes, and even a music store. But as an iteration of the Rock Band franchise I am a little disappointed. A lot of the tracks are recycled from earlier Rock Band releases in one form or another, the lack of any sort of multiplayer is bewildering given the platform it’s on, and the single player hasn’t received any noticeable overhaul that would make it compelling enough to offset the lack of multiplayer. At the end of the day you might ask yourself whether you’re simply looking for a standalone PSP music/rhythm game or whether you’re a fan of the series looking for the next Rock Band game; if the former applies then Unplugged is likely to appeal, opt for the latter however and Unplugged may fall short.