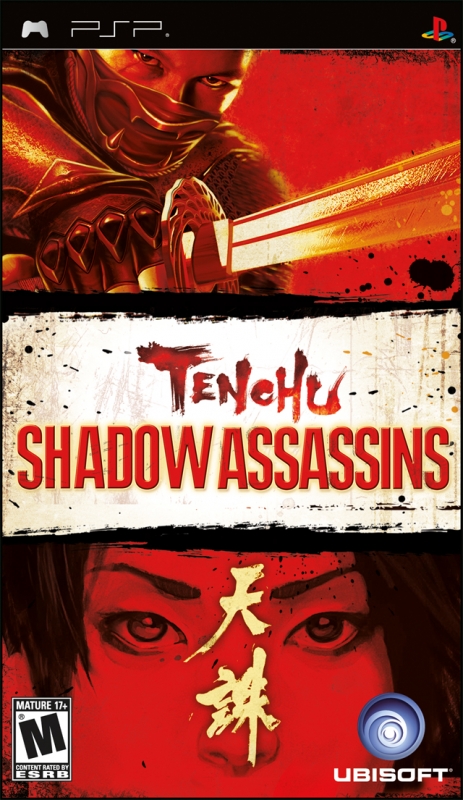 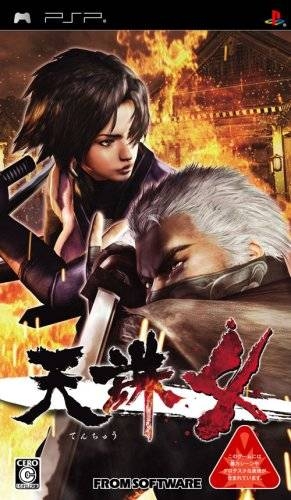 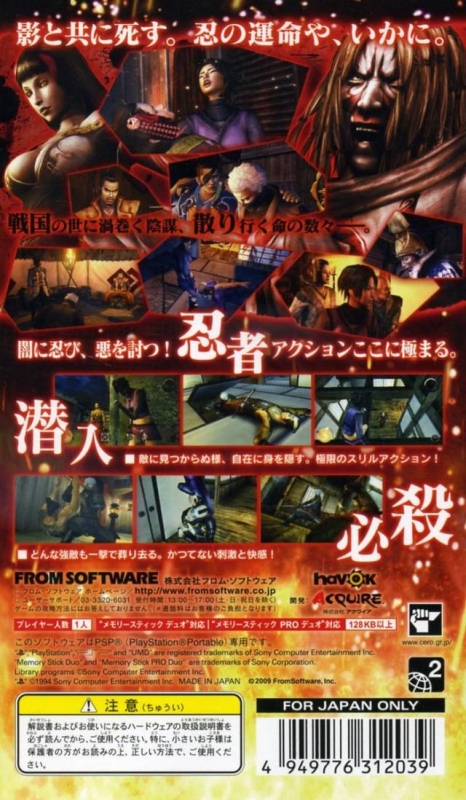 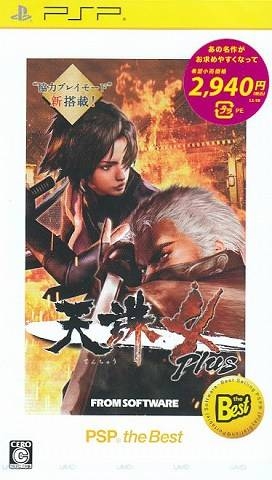 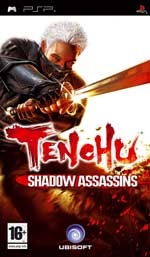 Tenchu sneaks onto the PSP, but can it deliver the killing blow, or is it all smoke and mirrors?

From Software brings the original Tenchu team back to bring us Tenchu 4.  Tenchu Shadow Assassins is the latest in the long running stealth series, bringing back Rikimaru and Ayame for another go round continuing the story right after Wrath of Heaven.  Tenchu's release is filling the stealth genre void in the PSP’s library but does the port live up to the console version?

Like most Tenchu games it kicks off with defeating the evil merchant in a tutorial stage to teach you the basics.  The basics of the gameplay in Tenchu are: sneak in the shadows, hide in bushes, hide on rafters, and above all try not to enter combat with a soldier.   Sounds simple enough but it’s much harder than you’d think.  The gameplay is perfect for the design of the game yet it's not forgiving at the same time; you have linear stages and basically one route to complete stages, and between you and your goal there are well placed guards to spot you whenever you make a mistake.

Rikimaru: "Are they listening to Disco Inferno?"

The basics are great, it’s puzzle solving with a bit of action thrown in for good measure.  But sometimes when it comes to controls it can get a bit frustrating and they’re not very fluid.  The game is tough and you only have one chance to go back if you're spotted so you'll die time and time again.  Most of your time on this game will be spent dying, figuring out where that guard was that you didn't see, and figuring out how to take him out without being spotted, rinse and repeat.  The most awkward parts are where they’re supposed to be fast agile ninjas but the actual movement is that of a tank and you’re slow.  While it has the chance to make you feel like a ninja, you’re taken out of the experience whenever you have to get out of the bushes and have to control a tank ninja to your next goal.

For the most part the rest of the gameplay is really good, you blow out a torch, sneak to the shadows and then have to stealth kill a few unsuspecting guards, and it’s all very satisfying.  Your only bit of help in the entire game is your ninja vision, it tells you where guards line of sight goes to, what you can interact with, and gives you free control over the camera which is usually only over the shoulder.  The other useful tool for helping you win and overall become better at the game is assignments, assignments help you improve your skills in the main game by teaching you to become faster, and ways to sneak up and kill your enemies.

This is what happens when you don't save a ton of money with Geico.

Your main way of getting through the levels is sneaking up and killing your opponents but if you have a sword on you and you alert a guard you can get into a sword duel. Sword fighting is an opinion to complete levels but it's very frustrating especially with the PSP analog nub, it’s one of those times you really wish you had the analog stick instead because you’ll try to register guarding yourself up and it’ll say you’re slightly off sometimes and you’ll take damage or die.  The nit picking aside, it’s a difficult game but when you beat a stage it feels rewarding because the game doesn’t go easy on you.

The game has pretty good music if you’re into the classical Japanese style.  It sets the mood just right, and changes to fit the situation, if guards are in alert the music sounds more alert, and so on.  The music is great for the immersion of the game, as the music fits the theme.  It's a great score, when things become tense the music becomes tense and it sends that feeling to you.  The voice work is average but good - many scripted parts full of full motion videos to explain the story.  Both Rikimaru and Ayame play through the same story, but from a different perspective with different events and stages. As generic as the story sounds, the plot manages some interesting twists, especially at the end. It is engaging enough to keep the player going, and well-paced throughout.

These guys should be wearing red shirts.

The graphics are above average for a PSP title.  There is a fair amount of detail, with nice textures, and everything comes together well to give the feeling of feudal Japan.  The game has plenty of effects, fire looks good, shadows with a nice mist touch, and character models are well designed.  It’s obvious they made the levels more confined and linear over past titles because of the presentation they wanted to give and the lack of power from the hardware.  They made the transition well and built the game around this and it worked out nicely for the game.

The game is really brutal especially if you’re new to the stealth genre or, like me, just not good at it.  You have ten story missions which are all pretty long - sometimes taking about an hour to beat because of the mistakes and dying over and over, there are however short little assignments perfect for on the go and just wanting to have some stealth action fun in short bursts.  It would probably take a good twelve hours to beat the story missions for the average player but you could spend a lot of time on the other fifty assignments that are in the game, add to that trying to get S ranks on each mission, and you’ll be playing for a good while to say the least.

Overall the PSP title is the exact same game it was on the Wii.  Some good and bad things come with that, the analog nub isn’t a good replacement for the analog stick, but the graphics are nice for a PSP game.  It’s a good portable title as you can sit at home doing the missions and when you’re waiting for the bus you can do some assignments that won’t take nearly as long.  It's a good buy if you’re a fan of Tenchu or the stealth genre.