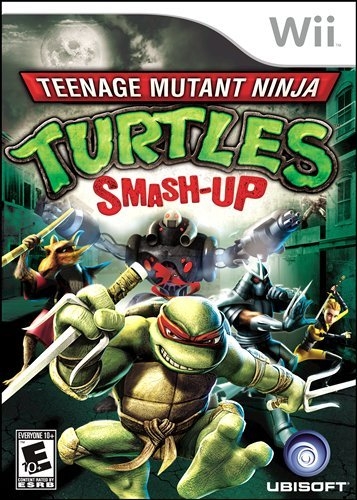 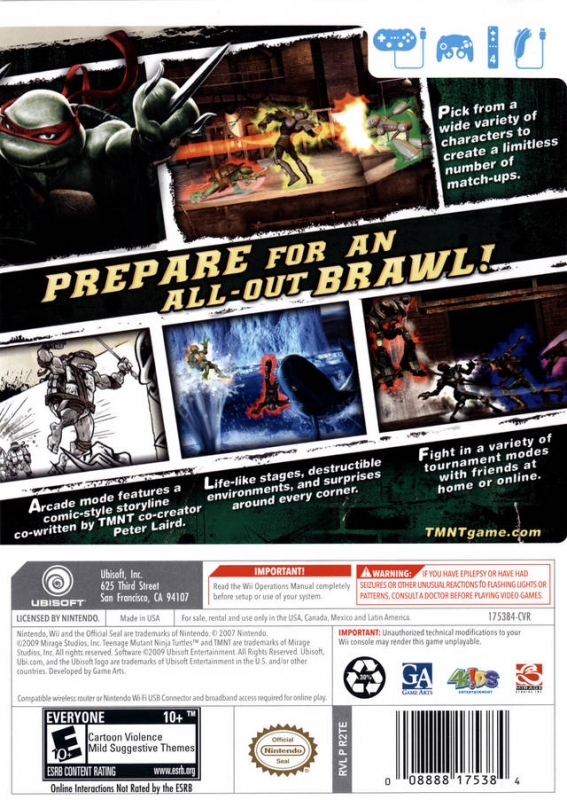 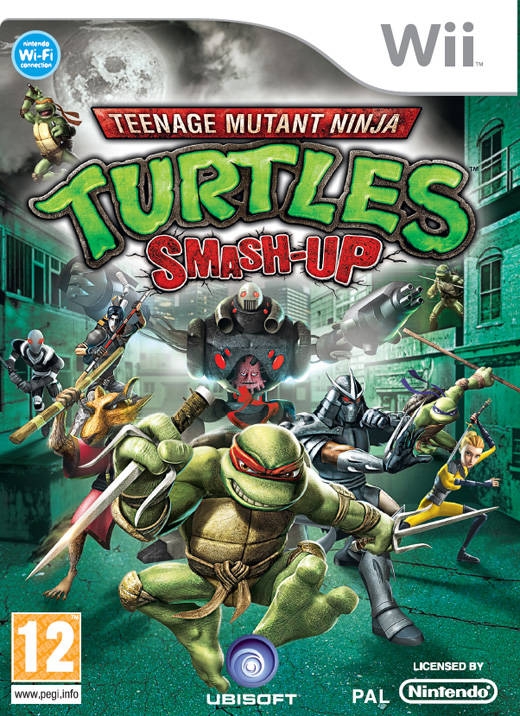 For those that want to play a more tournament focused fighter on the Wii.

My childhood was filled with movies, television shows, and toys starring everyones favorite mutated reptiles: the Teenage Mutant Ninja Turtles. Because of this, it is pretty cool to see that somewhat of a TMNT resurgence is beginning to take place. After the re-releases of Turtles in Time and a new game for the DS on the way, we old school fans couldnt be happier. When I first popped TMNT: Smash Up into my Wii, I was taken aback with the nostalgia, as this game seems to be for the oldschool fans of the series. Although it shares some of the voice actors of the newer animated show, and character designs from the TMNT movie a few years ago, you can definitely tell that the game is more based on the old comic books. This is conveyed with the cinema scenes, which between fights show black and white comic panels that seem to be in the very same style as the original source material. I was glad about this as I was really worried that I would have to sit through that horrible cartoon theme song like I did with a few older TMNT games, but I was spared.

The first thing I noticed aside from the cool cut-scenes was the fact that the game unapologetically pulls a page or two from the Super Smash Bros. style. The character select screen, the way you add your name, and even the loud voice that yells the characters names are all very similar to Super Smash Bros. Its no surprise, really, as members of the development team for Smash worked on the game. For all intents and purposes, TMNT Smash Up seems a lot like a newer version of Super Smash Bros. Melee, as it has less variables and power-ups during a fight, and keeps to the tournament nature that fans of the game love.

TMNT Smash Up contains only a handful of characters (around 16) but those characters are all varied enough and balanced that there is no one that's useless on the roster. You have everyone from Donatello and the insanely long reach of his bo staff, to powerful characters like Ultrominator (basically Krang from the old cartoon) that has a lot of knock back attacks and power moves. This balance really helps fix a problem that a lot of fighting games have with redundant characters or meaningless palette swaps.

The only problem I saw with this somewhat small roster is that this game is supposed to be a big Happy 25th anniversary TMNT! game, but there are no side characters that really should be there. Id hope for people like Baxter Stockman, Bebop, Rocksteady, or even the robotic mousers, but instead a few of the hidden characters appear to be different versions of the Ubisoft mascot, the Raving Rabbid. To me this was a missed opportunity, and if the game should ever get a sequel the roster should be improved upon.

When you first begin the game, you only have access to 7 characters (The turtles, Casey, Splinter, and April), but by completing the relatively short Arcade Mode you can choose to unlock other characters like Shredder, Ultrominator, or even Raphaels vigilante alter-ego from the TMNT film. This unlocking scheme is easy to grasp, but lacks the sense of trial and error and exploration that Super Smash Bros. revels in, making the arcade mode somewhat boring. Continual play-throughs of the mode will get you a few bonuses based on what character you use. For instance, if you finish the mode with Casey Jones, you get his alternate costume, which resembles his attire from the cartoon.

Aside from Arcade Mode, there is also a challenging Mission Mode that not only trains your skills but teaches you little quirks about the game's controls. For instance, there is one challenge towards the beginning that forces you to fight 3 enemies entirely with attacks from a pole that you can spin on. Many would disregard the little level enhancement, but this challenge forces you to jump, swing on said pole, and kick foot ninjas to their death. You get rated for these challenges, and are given records to beat. Aside from these modes, there is a Practice Mode, where you can practice different moves, and a few tournament modes. These include Battle Royale aka the standard versus mode, a mode that allows you to rotate people in and out of play, and finally a standard tournament mode as found in Super Smash Bros. Brawl.

The real meat and potatoes of the game lies in the online mode which I will report is much better than the online in Super Smash Bros. Brawl due to stability alone. Basically you connect to Nintendo WFC and choose to play against friends or join the matchmaking service. Before the round gets started you have a chance to practice a bit against a doppelganger of yourself for about 30 seconds, and then youre off. While the online isnt customizable, it does work all of the time, which is something I always had trouble with in Brawl. Granted, I was playing against a tiny few people that either got the game early or other reviewers during this time, but it should hold up after release. Lets just hope that a large influx of people doesnt choke the server and shut it down.

As with many of the best Wii games, Smash Up is playable on any controller set-up you can imagine. It supports Wiimote & Nunchuck, Gamecube controller, Classic Controller or a sideways Wiimote. Once you get past your initial controller choice, the controls are easy as pie. This is especially true if you are a veteran of Brawl, as it has the exact same controls. The only difference is that TMNT Smash-up has an odd lightgun-esque crosshair that can be used to trigger certain level specific targets. The one main use for this that I saw was a wild west styled level in the Challenge Mode, where you had to shoot a picture of a buffalo in order to create a stampede.

Your characters have a seemingly small arsenal of moves to play with, but there are combos in this game that really set it apart from the less 'arcadey' stylings of Brawl. You have a regular B attack and A attack, as well as variations for up and down, a powerful takedown attack, and a throw for starters. I discovered real quickly that you could do some cool things like Splinter's takedown along with a wall-jump and take folks out pretty quickly. It is due to this more skill based arsenal that I feel that those gamers that were disappointed with how Brawl played will really like this, as it basically plays just like Melee with a few tweaks. So for those of you that dont want things like smash attacks, and any other balancing agent, this is the game for you.

The graphics in TMNT Smash Up are pretty beautiful and always have something going on the background. This is really showcased in levels like the dojo where a fireworks display is firing off in the background. Things suddenly go awry as the dojo bursts into flames and the building begins to collapse, all with no slowdowns. That level is not the only interactive arena, as almost all of them have some sort of gimmick in order to keep you on your toes. Whether it be a cruise through killer whale- and shark-infested waters, a jungle area that has weak ropes you can break, or a temple with collapsing pillars, you are always seeing some sort of interactivity in the levels. The character designs are also well done, and look to be in the style of TMNT movie from 2007.

The music and voices are also pretty good, but can get a bit annoying like in any fighting game. For instance, Casey Jones always yells his trademark Goongala! after any successful wall jump, and that gets old real quick. For old timers, there is even a level that has music obviously inspired by the old Teenage Mutant Ninja Turtles cartoon, which brought a quick smile to my face.

Ubisoft has also packed a bit of swag into the retail package for this game, which really brings the value up in my eyes. The game comes with a free limited edition 24 page comic book from the guys over at Mirage comics. While its a goofy romp through various locales in the game, it really helps tie in with the awesome cut-scenes and shows people what the turtles started out looking like before they were the stuff of early morning cartoons. Coming up with a value score is pretty hard for this game, as it really isnt too different from Super Smash Bros., and has less of a storyline, but excels on a gameplay front and has an exceptional online setup, albeit a simple one. For these two reasons alone, this game gets put up pretty high in my book.

In conclusion, TMNT Smash Up is a quality game with its share of good and bad points. Those looking for an epic one-player storyline like the Subspace Emissary mode in Brawl will be disappointed, as the arcade mode is very short. For those looking for a great Smash Bros.-style online experience, look no further, as this game gets that old buggy system up to speed. For fans of the Ninja Turtles, and especially the older fans, I really see no reason why you shouldnt run out and get this game, as it makes other TMNT-branded fighters, like Mutant Melee, look like chumps. While not the best TMNT game ever made, this one is definitely close.