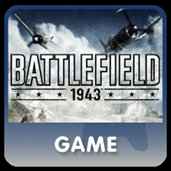 Dice's latest romp in WWII, but is it worth your dollar?

Back to World War II we go for another romp with the world’s greatest generation. Battlefield 1943 is the latest in the Battlefield series and for the first time is a download only title. This iteration is also multiplayer only and the only thing you’ll do by yourself is the tutorial on how to play. But the big question is: “is this game worth going back to WWII for?” Well, we have your answer...

Following up DICE’s Battlefield Bad Company, Battlefield 1943 is using the same Frostbite engine, meaning just about anything you see is destructible including the ground (to a point). With that much said the game is by far one of the best looking and most destructible games available for download, and it has the production values of a full retail game while still being budget priced. The only thing that keeps you in the mindset that this is a downloadable game is that it has no single-player and only three normal multiplayer maps and one air-only map. The character models have fluid animations, and while not that varied, they do have a good bit of detail. Vehicles are the same high quality, so you can easily tell the difference between a Japanese forces tank and an American forces tank, for example, and they look especially good when they blow up. The only graphical issues come in the form of draw distance. Textures can look blurry, but then when you step within a certain range they suddenly become clear. It’s quite noticeable when this happens.

Music is a bit lacking. You have a tune that plays during the title screen and at the end of the match, but not much else. On the flip side the game has very good sound effects. Knowing what direction a shot was fired from can mean the difference between living and a sniper connecting with his second shot. While it may lack music, it certainly picks up in the sound effects department, to the point that the sound effects even improve gameplay.

The game will entertain you for hours just chopping down trees with a mounted machine gun, or knocking down a whole building with a rocket launcher. The amount of destruction is just so fun, although it may be a bad idea to get distracted with this too much, since you’re always going to be playing online with other people. Each map is highly detailed. The first time you see the Iwo Jima map you may be reminded of the pretty locales from Far Cry; nice clear water, palm trees and the like. Unlike Far Cry though, during play these pretty locales will become broken down and sometimes whole areas become razed and the ground covered in ash. You will feel like there is a war going on around you.

Warning watch out for falling rocks

Speaking of war, where would war be without the people. You can have up to 24 players for 12 on 12 combat, and each side can make squads consisting of up to four people in each one. In Battlefield 1943 you have three classes. The first is your standard balanced infantryman - good at taking out/repairing vehicles and close range combat. Then there's the rifleman who can fight medium range and is best at taking out enemies on foot. Finally you have your sniper - great for long range, stealth, and taking out people/vehicles in the sneakiest of ways. There isn’t much character variety but each class balances out the other and works well for the gameplay. Each class has a main weapon, but they also have sub weapons meant for various other uses. Riflemen have a grenade launcher to easily dispatch a group of foes all at once, infantrymen have rocket launchers great for taking out vehicles and buildings, and finally snipers have explosives that they can remotely trigger or vehicles will trigger when they drive over them.

All weapons in the game have unlimited ammo, but items other than the players' main weapon will have a timer until for ammo to replenish. So while you might have 3 shots with a rocket launcher, you’ll have to wait a little while until you can use it again, but there's no need to find ammo. All around it helps the player focus more on the task at hand without worrying about ammo conservation, so you’ll never have to stop the fight to run around trying to find ammo for your gun.

Rarely in the FPS genre are vehicles so well incorporated as they are in Battlefield 1943. Each map is very large, making things like air combat possible alongside strategic ground combat. Each vehicle has a good purpose and balance to it. When you use a tank you really feel like you can take on anyone, but at the same time you’re not indestructible or overpowered. Additionally, all the vehicles handle very well and drive how you would expect. There are four different types of vehicles in the game. The Jeep, which gets you from point A to point B faster than anything else, is lightly armored and can carry up to three players. It also has a mounted machine gun for a second player to man while someone drives. The tank has heavy armor, is a bit lumbering, with the driver controlling a machinegun and the main gun, while a second player can use a mounted machine gun to defend against enemies on foot. The airplanes only hold one person, but they're great for dropping into an enemy base, fighting off an air strike and other planes, and can take out tanks. However, there's a bit of a learning curve to the planes. The last vehicle is the armored boat. It can hold up to six players, has two mounted machine guns, and is the easiest way to circumvent enemies blocking a path on land. All have their strengths and weaknesses, for example the tanks are weak to planes, boats and jeeps have little use outside of fast travel, and the plane can easily be taken out by anti-air.

The scale of Battlefield 1943 is impressive

Battlefield 1943 is a mixed bag. It's great online multiplayer fun, but it lacks modes, maps, and options. Furthermore, if you’re looking for something to play by yourself, you won’t find it here. But it is budget-priced at $15, and the multiplayer mode here is better than some retail packages. There are also collectible stamps, which are like in-game achievements, given out for doing specific things like taking out a set number of enemies or capturing flags. There is a ranking system as well, much like you would find in Call of Duty, and you gain experience each match and level up once you reach a certain point. These are more for bragging rights and really serve no purpose for actual gameplay though. While not main attractions, these extras add a little more length to the package if you’re someone that likes to achieve everything possible in a game. It must be mentioned there are some connection issues for some folks. I personally didn't have any issue at all - I picked up the game the second week it was out and had zero problems. But many people have reported issues with just connecting to EAs servers. EA have said they've since worked these problems out, so this is just a disclaimer.

All around, for a PSN/XBLA title you'll struggle to find anything as pretty, or with such deep gameplay as Battlefield 1943. While you won’t find a strong single player in this package, you do get a really solid multiplayer game, and for those that love to play online (and frag random people and their friends) it’s perfect.