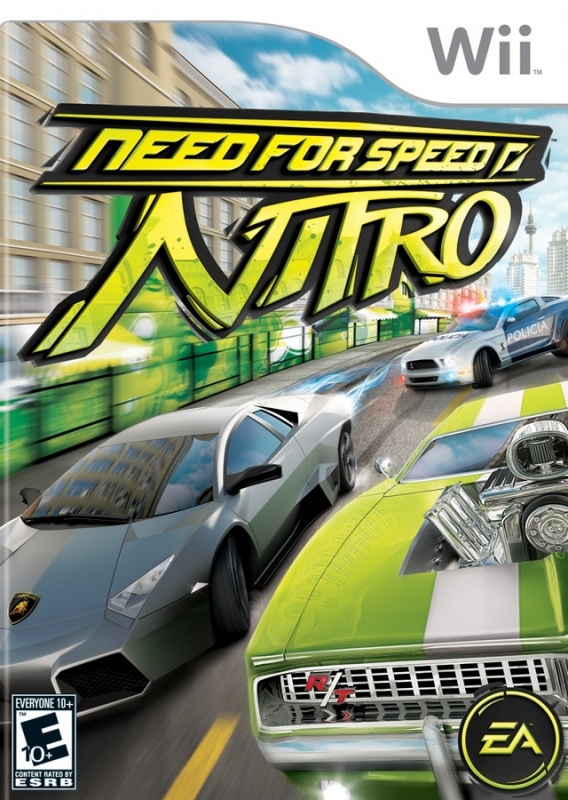 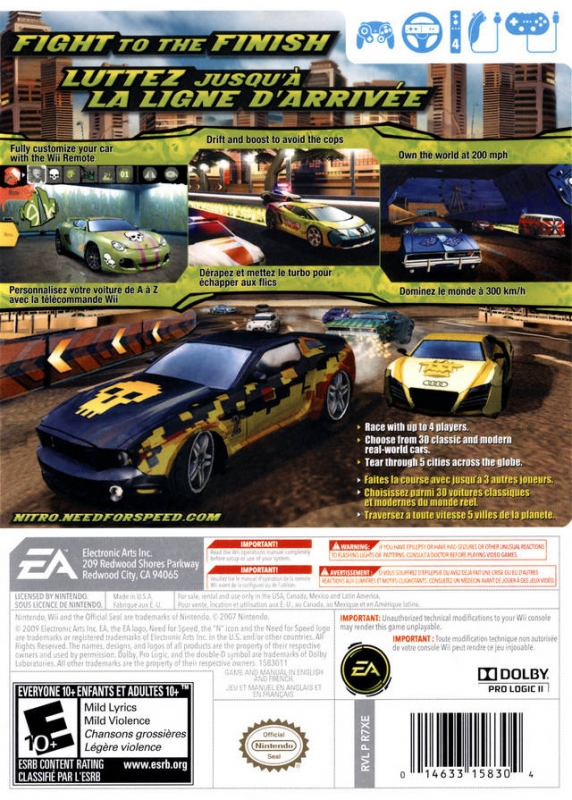 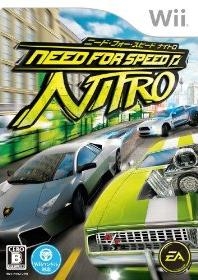 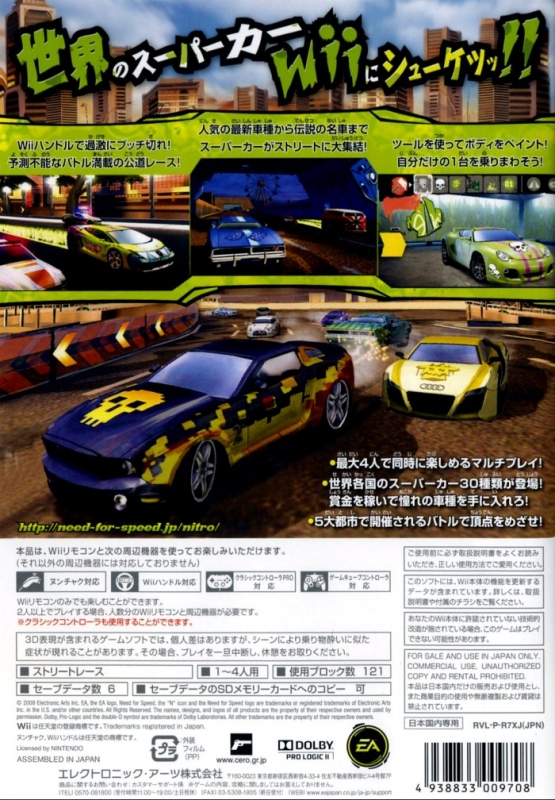 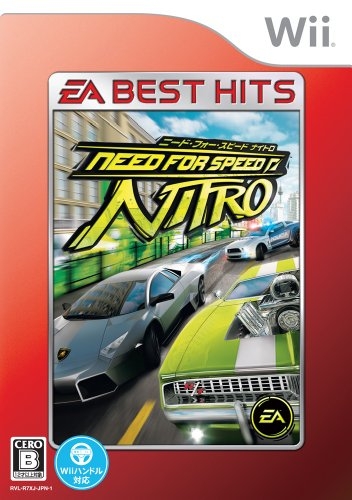 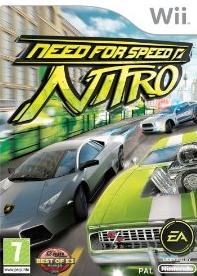 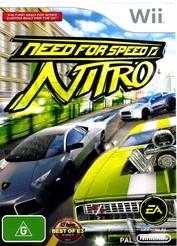 Like many of its other key franchises that are blessed with the release of a new title annually, EA’s Need for Speed Nitro is exclusive to the Wii (and DS), which means it plays differently from its competitors and even predecessors. In an attempt to reach a broader audience, the latest Need for Speed to hit the Wii features a much more simplified approach to the Need for Speed formula that’s been seen for over a decade on countless different platforms, for better or for worse. Although that may have the potential to scare off any hardcore sim racing fans out there (and rightfully so; this most likely isn’t your game), for the rest of us, there’s still a lot of fun to be had in many regards. However, a few curious mishaps slow down the game in others.

If you’re a Need for Speed veteran, then nothing about Nitro’s core gameplay elements will catch you by surprise. Once again, the city streets are your racing grounds, and avoiding oncoming traffic as well as outmaneuvering trailing police units are just as essential to winning as accelerating fast enough to win the race. Now combine all of this with a more animated, stylistic, and altogether family-friendly approach to everything from the main menus to the few cutscenes that accompany Career mode, and you have Nitro in a nutshell.

Given the visual overhaul, you may be surprised to note that everything still manages to look above par for what we’ve seen on the Wii before. The game runs at a silky smooth 60 fps and environmental lighting and their overall vibrant visual appeal is nothing short of fantastic. Sure, some of the textures could have used some refining (particularly for cars), and the few cutscenes featuring rival racers are all super cartoon-like and over-the-top, but for the most part Nitro is successful at portraying its attempted look and feel.

The game’s two racing modes, Arcade and Career, also ooze with a much more unique and arcade approach than what past titles offered. Taking a cue from many other arcade racers on the market, Nitro offers two power ups that can be activated when tracked down along the race course. The first is a wrench icon, and after it’s triggered it repairs your vehicle, if you've taken damage. It’s actually a great tool, because if your car sustains too much damage you will no longer have the option of using your built up nitro - a necessity to win. The second item is the police badge, giving you the option of reducing your acquired Heat or raising an opponent’s. Some may scoff at a mere two items, but the game really doesn't need any more - they create great balance in that they add a flavor of mayhem and a bit of strategy to the mix while not tipping the scale too heavily in the 'arcade-racer' direction.

While the game’s realistic approach took a hit for wider-audience appeal, there are a still a bevy of cars to unlock during your Career mode play-through. There are over 30 classic and modern cars total. Even better is the amount of customization that Nitro offers, all due to the wonders of Wii’s IR pointer. You can paint, write, place, and alter just about any design you can think of using every shape, color, and size of paintbrush imaginable. The game even features a custom “tag” option that, once you’ve created a small graffiti-like design to your liking, will be plastered over all the walls of the track when you are in first place, adding some insult to your opponents' injuries. When you factor in the other customization options, like the ability to mirror your car designs to different parts of your vehicle and trick out your vehicle with new body parts, it becomes a shame that there’s no way for you to share your designs with friends over the Internet. There’s not even an online play option in the game, a sorely missed feature that should be standard in every racing game in the year 2009.

Other than the chance to unlock more cars, the rest of Career Mode is a bit of a mixed bag. Taking place across five different locales around the world, your goal is to earn cash completing an assortment of different racing challenges, whether that be completing a typical circuit or drag race, or doing something a bit more meticulous like drift racing or time attack. It’s all ultimately enjoyable, but becomes a bit too repetitive, especially as you replay the same challenges with only a sight difficulty bump. The mode also takes its 'broad audience' appeal a bit too seriously, because it’s almost completely lacking in narrative - something to give a bit more pizzazz to a story that seemingly just has you out for more money.

All of the tracks that encompass the title are designed well in just about every aspect, with a superb ranging difficulty that continually progresses as you advance in the game. It’s just unfortunate that there’s only a limited number of them (two tracks for each locale), making Arcade Mode a bore in a hurry, especially if you’re the only human partaking in the racing. Thankfully, in addition to local multiplayer, you can actually play through the five plus hour Career mode with a friend - one of the highlights of the whole game if you’re lucky enough to have the option.

If you’re one of those people who can’t get into a Wii racing title because of the motion controls, then you’re in luck here, because not only does Nitro include the standard Wiimote with Nuchuk method of play, but both the Classic and GameCube controller are available as well. Motion-wise, Nitro even has two more methods: the horizontal Wiimote and a vertical option that has you twisting it left and right to steer. Obviously, all of this information would be rendered meaningless if they didn’t work properly, but for the most part, they do. I was surprised at how fluidly my vehicle maneuvered with both of the motion control options, especially the vertical method. Both aren’t without a frustrating hiccup, however - drifting isn’t as responsive as it should be in each of the motion controlled control schemes. As you turn your Wiimote slightly and quickly tap B (to execute your drift), you’ll find the game translate your motions into perfect execution. On the next, you may not be so lucky and find that the game doesn't register your movements at all, ramming you straight into a nearby wall. It’s a lack of continuity that makes it all the more frustrating and needs to be fixed for any potential future titles. Without this blunder, the controls would be nearly flawless.

As far as gameplay goes, two other large variables will also no doubt get in the way of your enjoyment. You’re only left with one third-person camera angle and nothing else, with the game going so far as to exclude a first-person view of any sort. The other is that if you’re using the horizontal Wiimote control method, neither the 1 or 2 buttons will work on menus, forcing you to awkwardly revert to pressing both A and B to get where you want to go. The latter may sound a bit nitpicky, but it’s no doubt an annoyance that needs to be experienced firsthand for it to fully take effect.

On the audio front, Nitro’s music is your typical racing game fare, featuring over 25 different tunes to race with (once again, there’s no SD card support implemented for your own tunes for some reason). If Nitro were being graded simply on its added sound effects, it would no doubt receive a top-notch score. Crashing and drifting noises are as realistic as ever, and each unique engine gives off a different roar.

The Wii version of Need for Speed Nitro is without doubt a great effort. Nitro’s attempt at combining a touch of realism with a touch of arcade racing’s most notable nuances come together astonishingly well. At the end of the day, it really comes down to how well all of the game’s mechanics and extras come together to create fun and engaging gameplay that everyone can experience. What you have here is essentially a great groundwork to build upon. While Nitro can be a blast to play, there are just enough drawbacks in a few critical areas to stop it from being anything memorable. Touching up a few gameplay flaws and adding online play would do wonders for the game. There’s ultimately enough content for just about anybody to enjoy; just don’t expect it to be one of the Wii’s finest.