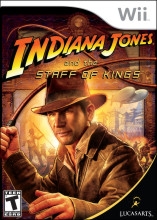 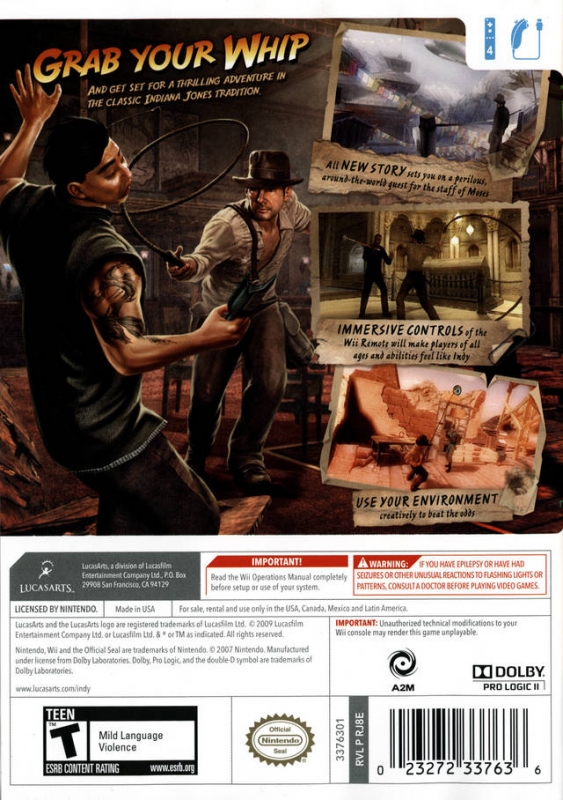 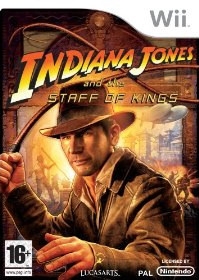 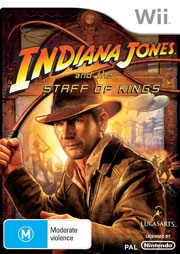 Indiana Jones and the Staff of Kings (Wii)

Review: Indiana Jones and the Staff of Kings

Should fans of the adventure genre discover Indy's latest or is this an adventure that only diehard fans should take part in?

“He chose… poorly.” If you have no idea that the previous sentence derives from the Grail knight in Indiana Jones and the Last Crusade, then you most likely will be choosing poorly yourself when picking up the new Indy joint effort by Artificial Mind & Movement and LucasArts. While hardcore Indy fans will uncover loads of fan service paying homage to the movies, enjoyable unlockable extras, and a harrowing adventure experience that almost makes you feel like Dr. Jones himself, everyone else will find themselves combating overly clunky controls and design flaws more than they will Nazis or Chinese thugs.

Long before Mutt Williams began tagging along or crystal skulls were linked to extraterrestrials (in 1939 to be exact, one year after Last Crusade), “Kings” presents an enjoyable story that, if it were just told to you without any mention of a video game, would actually pass for an Indy movie premise. Much like the movies, the game centers around a religious artifact that has both the Nazis and Indy himself intrigued – the Staff of Moses. Of course, it won’t be easy to find it’s location, and to do so Indy will have to make his way through a variety of locales like Nepal, Panama, Istanbul, and more as more light is shed upon the holy staff’s location. It’s nothing too compelling or complicated, but again, a summer popcorn flick atmosphere is more in line with the franchise as a whole, and a nostalgic twinge that reminds you what made the first three movies so great may come over you. That is, until you reach the poor gameplay elements.

When you take your first stab at Journey On mode (the main mode where you play out the Indy adventure), right off the bat it’s apparent that visuals are a mixed bag. Where most of the time environmental lighting, textures, and Indy himself all look great, other times the exact opposite is true, with random environments and just about all enemies looking downright unpolished and very much high-end PS2 –like. It should be noted that not including the poor enemy animations, these moments are very sporadic and although not acceptable, don’t greatly detract from the title. Cutscenes are somehow the biggest culprit here, with every cutscene looking worse than anything you would find during actual gameplay, all of which have a mediocre to poor PS2 graphics vibe. When your main platform is the Wii in 2009, this is all completely inexcusable - although the saving grace is that these incidents don't detract too much from gameplay as the game isn't littered with them. But even more inexcusable are the horrid animations you have to witness as enemies repeat the same tacky combat moves over and over again. Indy’s jog that he uses to get everywhere couldn’t look further away from the intelligent yet commanding persona that was shown through all of the movies. Surprisingly enough, this same Indy actually gives spectacular dialogue that anyone would take for Mr. Ford himself if they were not paying complete attention to every line. All voice-overs and sound elsewhere is top notch as well, and classic John William’s scores are presented with new material in a way that will please Indy and music fans alike.

There’s a lot to do and see on Indy’s latest adventure, and like in the movies, your whip will be your ultimate tool, whether traversing jungle landscapes or in the heat of combat. Three different swings are available for players to use when delivering the beat down to baddies: a low flick of the whip that aims for the feet of an opponent, a mid range attack that either drops weapons an enemy may be holding or an attack at the waste, and a high flick that reels in an enemy by the neck so that you can finish them with a quick left or right jab. All of this is done be by pressing B and flicking in the appropriate direction, working correctly every time you try it (unless you are surrounded) The rest of combat attacks are a mess at best and take the cake for one of the worst aspects of the game. Punching is done with gestures from the Wii Remote and Nunchuck, but whether you’re trying to deliver a left jab or right uppercut won’t likely matter as the game fails to recognize your movements a good portion of the time. Even worse is the fact that the camera switches from the standard behind the back view of Indy to a third person fixed camera-like view from up above, so that you can scrounge around the environment looking for interactive items to use against an opponent. Whether you’re throwing a bottle or chair, or pulling a bookcase down over an enemy with your whip, interaction with the environment sounds promising but ultimately fails because of the over reliance on this type of combat. Getting surrounded by five guys and having to rely on you environments for combat isn’t fun, as half of the time you’re running around like a maniac looking for the next object you can use against an enemy. Keeping the standard view would have been nice, as not only do environments look much better in this regard, but you have the ability to move the camera around to look for objects with the Control Pad anyway.

Taking its cue from the movies again, there is more to Indy’s latest outing than combat. Exploring the locales - whether swinging from cliff to cliff with the aid of your whip, solving mysterious puzzles, or even avoiding traps and giant boulders - are all just a glimpse of what you’ll be doing. These moments aren’t rare, either, and it’s nice the developers knew that it’s a key balance of action and exploration that makes a true Indy experience. But again, moments of exploration would have been so much more enjoyable if all of these instances were more polished and debugged. Technical issues or design flaws plague key gameplay elements, with one of the most troubling being that you can’t skip cutscenes or in-game tutorials when you have just failed and are forced to restart. The flow of the game can be routinely interrupted with loading screens that pop up randomly during gameplay, controls that move in the opposite way than what you’re intending, collision detection and framerate issues. There are also lots of infrequent gameplay oddities like not re-spawning when dying, Indy randomly screaming when walking, or even getting stuck behind an object and having to reset the game. Some of these are much more an issue than others, but all get in the way of what could have been a fantastic portion of the game. Other portions of gameplay have you riding through town on the back of an elephant or flying a plane after escaping Nazis, with both being exciting for what they are, but the latter suffering from some control issues.

Easily the most exciting and best-designed parts of the title are the gunfights that are sprinkled throughout the journey. All have Indy running and gunning through an area in third person light gun style action. As soon as Indy hides behind an object for cover, just move the control stick in the desires direction to reveal yourself, point the Wii remote at the screen, position your on-screen reticule until it flashes green and fire. Taking a page out of the book for standard combat, many situations require you to spot shoot-able objects in the area to hit an enemy with, a welcomed addition to the standard shoot-at-every-moving-thing you see so often in these situations.

Extras are everywhere in the Wii version of Kings and unlocking them via hidden artifacts found in the main game can be difficult, giving good incentive to go back and play the game again. Movie trailers, concept art, and the ability to play as a few alternate characters/skins (Han Solo!) are just the icing on the cake - also included exclusively in the Wii version is the early 90s PC point-and-click adventure title Fate of Atlantis that is an awesome treat for those patient enough to sit down and play the bonus game. Multiplayer modes are included giving you the option of playing against three other people in bland tank/plane combat games, as is a survivor mode where you and a friend compete to see who can dispatch the most enemies. An underwhelming hour-long co-op mode has also been added that is fun while it lasts if you can make it through poorly designed controls and levels.

Indiana Jones and the Staff of Kings isn’t the worst movie franchise game, and it’s definitely not the best either. The game sits nicely at a good eight hours, but it’s eight hours filled with a variety of design flaws and visual miscues that hinder it from being an extraordinary game. It should also be noted, that as a big Indy fan myself, I still had the desire to play even after facing all of the issues mentioned above, as controlling Indy through an all new 3D adventure has its merits no matter the gameplay issues if you’re a big enough fan, and Fate of Atlantis makes it even more worthwhile. But if you find yourself not as enthused about the franchise as I am, then this adventure is probably not worth your time.