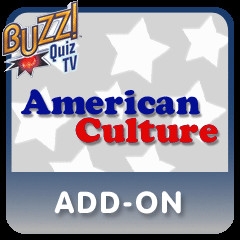 Ever since Buzz! Quiz TV launched the publishers have released a new add-on pack every so often. The expansions increase the number of mind-bending questions while adding new subjects. American Culture is the seventh add-on pack to be released, unleashing 500 questions about America's culture, icons and history.

The pack - filed under the brainiac category - is split into each of the game types, meaning it will be quite some time before anyone sees every question available. The expansion amounts to hundreds of hours of extra fun to be had with anyone you play with. Who can complain about adding more enjoyment to an already fun game like Buzz?

As this is a quiz show game the gameplay involves questions being laid out for you to answer. The questions range from how Barack Obama asked Joe Biden to be his running-mate to when the Louisiana Purchase was. There are questions about pretty much every president, American holidays and wars and events.

The content is the major story behind all of Buzz's add-ons. What is the quality of the questions? Are they easy? Or too hard? The standard is great and the difficulty can't be measured due to the randomness of the questions. Sometimes some questions will be difficult, others easy. Sadly, like the other packs, this doesn't add any new game types which are starting to be needed. While this game isn't likely to get old it will most likely be shifted to a party game versus a family game if it doesn't get any new modes, but the overall presentation does suffer from the lack of any new gameplay mechanics.

The questions are still displayed in the traditional fashion. Each question is narrated then four answers pop-up for you to choose from. If you don't know the answer there is still a 25 per cent chance of getting a question right as long as you aren't playing the 'All that Apply' mini-game. There is nothing new here in terms of graphical updates. It is expected that new content including characters and mini-games will be added through a game update, a precedent set by game update 1.10.

Overall this is a good additional question pack for anyone wanting a new subject to test their knowledge against; and with 500 questions there is enough content to add hours of game time. At $5.99 in the US PlayStation Store each question costs a touch over a penny, so value is there in this addition.