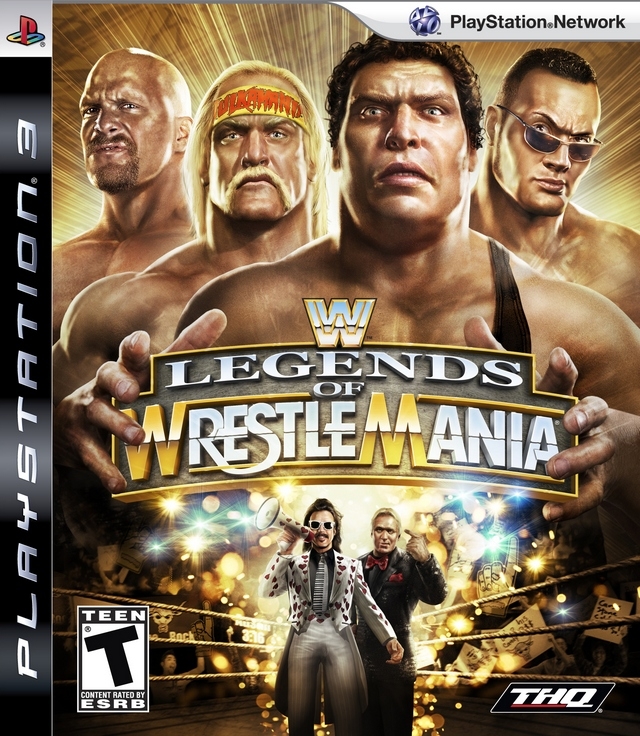 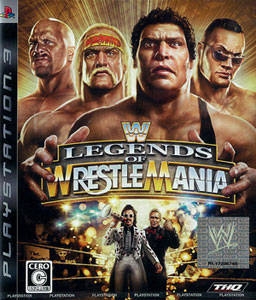 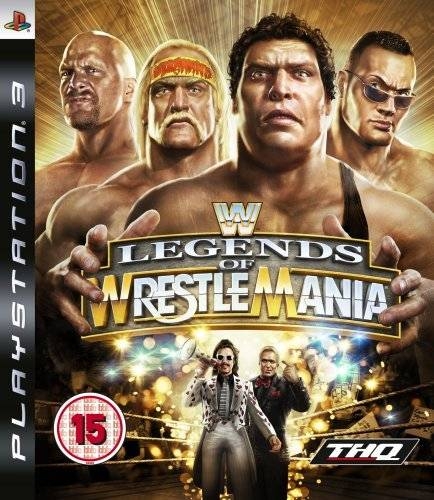 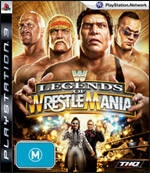 Bringing back the glory days of wrestling to a console near you.

One of the first things you'll notice is Legends of WrestleMania isn’t a visual stunner to say the least.  Character models look more like cartoon versions of the wrestlers, seems like good ol’ Vince put a little too much roids in the wrestlers water bottles.  That’s not to say the cartoony look is bad but it’s not going to be for everyone and the models don’t look as good as some past gen models because of the style they went for.  The crowd 3D models are very low res which wouldn’t be an issue so much if the intros didn’t zoom in on the crowds, and sometimes you fight in the middle of them.  The other major graphical issue is the filters.  There are filters to make the screen look like you’re looking at old video with a brownish haze at times, but the filter flickers from time to time and you can see everything the way it actually looks.  Another blur filter in the game that is supposed to give the illusion of the cameras not focusing on the crowd/announcers also flickers and poorly outlines the models.  Other than those gripes the game has solid visuals - nothin to write home about, but its average, holds up framerate wise, and pleasing to the eye.


You're not stopping Hulkamania brother!

THQ built this game for the classic wrestling fan, and it pulled off the presentation it were going for to a T.  Every match where you try to recreate the historic WrestleMania match, you’re treated to a highlight reel of all the events leading up to the match and the big moments in the match itself.  Then when you play the match you have objectives to redo each aspect of the original match, from Shaun Michaels hitting Stone Cold with a cymbal off a drum set to Hulk Hogan slamming Andre the Giant.  If you’re a huge wrestling fan from the days of yore, you’ll be pleased with how all the classics were represented and being able to recreate those moments.

The sound is solid; pure and simple is the name of the game.  They’ve included all the introductions of the wrestlers, the introductions are also played while going through the menus.  The commentary is all done by Jim Ross and Jerry “The King” Lawler, and while not being the original commentators for most of the matches, it does a solid job in redubbing most of the quotes from the matches.  There’s not much you can really say stands out on the sound department, but it includes everything you would ask for in a wrestling game based around WrestleMania.  It has all the classic introductions, the quotes from the commentators of the match, and everything is packaged very well.

Gameplay is a mixed bag; THQ has broken off from their traditional controls for simple controls, using only one joystick and the four main action buttons.  Basically all your actions are either a combo, pressing two buttons together, or holding a direction and a button.  Simplifying controls is a great thing to do especially if you may be targeting this game towards the older crowd of wrestling fans, but the implantation of the controls can be somewhat clunky depending on the situation.  When you’re playing the main story mode, when performing some of the objectives, you’ll try to do the move the game needs you to perform, such as an Irish Whip, and all your character will do is a hold because you pressed the grapple button too long.   Not a major issue when you become used to it, it’s pretty easy, but for the learning curve it can be clunky even for seasoned gamers, so it may be worse for those older gamers this game is geared towards.

While the objectives are awesome for reliving past WrestleMania matches, sometimes it can be rather annoying to do.  Take for instance Stone Cold vs. Bret Hart, there are certain objectives you must meet before being able to go on to the next match.  One of the objectives requires you to get the computer opponent to follow you out of the ring, get close to a certain ring barrier to hit the grapple button all for it to knock you into the crowd for the “More akin to a bar fight” objective.  Once you’re in the crowd you must get the computer to get close to the edge of the crowd, press the grapple button and then go back to the ring.  It’s harder than it sounds and can cost you the match if the opponent beats the mess out of you while you’re simply trying to get back to the ring.  Which leads into the other issue with the gameplay, taking the fight out into the crowd, up to the front stage, getting a weapon, or hitting your opponent on certain objects in the environment are big hassles.   They all require you to stun them while they’re close to the object you want to use and then grapple them.  It’s more complicated than it needs to be, takes too long at times, and can sometimes cost you the match.


The heart breaker meets the Hart, a match made in heaven?

With all the annoyances the game has, it is still fun, and has plenty of modes.  You’ve got the relive mode for playing out matches how they happened at WrestleMania.  There’s rewrite mode which allows you to change how a big match happened, usually for matches that ended in an upset.  Finally there is the redefine mode where you can take the original match and play them out with different wrestlers.  All center around the objective based gameplay and have videos to go along with the matches, all pretty fun modes, and are the main attractions of Legends of WrestleMania.

After that you can become a legend killer, creating your own wrestler to take out all the famous WWE legends, you level up and gain stats for your legend killer until it becomes top dog.  You can take your custom character online with the stats you gain in legend killer mode.  The game boasts a large roster of 38 superstars, 4 managers and also 16 arenas.  Local multiplayer includes all your standard matches, hell in a cell, royal rumble, etc. and can play up to six players locally (four on 360).  Online you’re limited to up to four players, but you retain most of the options and match customization you have in local play.  With extensive modes this game can be a lot of bang for your buck.  Relive, rewrite, and redefine can all take a few hours each.  Legend killer and multiplayer can take up hours upon hours of your time just playing matches to your heart’s content.

You have good gameplay hindered by an annoying learning curve for controls, with a few needlessly complicated points here and there.  The online is very solid and plays just like it would if you were local.  Overall the game is a solid package with a few flaws.  If this game is right for you centers around if you’re a fan of wrestling during the old days until the attitude era.  If you are and don’t mind the flaws, it’s worth it; if not, you might want to wait till the game hits the bargain price.