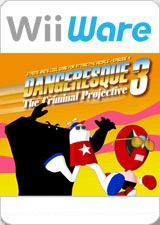 I have to say, when I first heard about the Strong Bad games I was very excited. I am a long-time fan of the Internet Cartoon and just couldn’t wait to see what the The Brothers Chaps cooked up for their five adventure games. Thankfully, all the charm that permeates the show can be found in all these games. Episode 4 is a great departure from the others. Instead of playing through a wacky situation, in this game we play through a wacky movie that is directed and written by none other than Strong Bad.

Dangeresque 3 is a funny parody of crime and mystery movie clichés. Strong Bad is Cop/Private Eye with a nunchuck gun (see picture below). This episode is pure genius. By setting the game in a home movie, the writers had a ready-made chance to exploit everything clichéd and cheesy about action movies. Add a funny plot and grossly amateur acting and special effects, and you have the recipe for the funniest episode I have played so far (let’s see if Episode 5 can compete).

The voice acting really helps bring this game to life. As fans of the series have come to expect from The Brothers Chaps they both deliver perfect performances. In addition, TellTale Games have once again taken time to animate the game in the familiar Flash animation that we have come to love since 2000. In Episode 4 the animation has been kicked up a notch and really plays into the theme. The better animation really makes the botched special effects funny. There are very few complaints about the presentation of this game, except the normal problems with walking in 3D on a visually 2D surface. The graphics may not blow you away, but they do retain the feeling of Homestar Runner.

The gameplay is standard fare for Point and Click Adventures. Pressing the pointer will move strong bad in that direction. Pressing on an Item Hot Spot will activate it. This is how you can talk to people and sleuth around different locales. Exploring and gathering items is key to completing the game and solving puzzles. The basic idea is to think how you can use an item you posses in order to effect the environment or characters. Some puzzles may take a while to figure out, but unfortunately there are no huge brain teasers or particularly challenging obstacles. This episode does have some pretty outstanding puzzle ideas that play on the home movie setting. The best example is a puzzle that doubles as an extremely low-budget chase scene. It's a perfect balance of puzzle based gameplay and comedy.

There are other game mechanics thrown into this package, but they are not as polished as they were in previous versions. With the Limozeen metal detector you can explore all locales for secret items. Many of these secret items can be used to play with other toys; such as the Teen Girl Squad cartoon strip and the in-game video game “Space Circus Catastrophe!” The Teen Girl Squad cartoon is a customizable comic strip and collecting new comic panes with the metal detector offers more possibilities. By collecting more comic panes you can change the arrangement and create new events that will affect the overall outcome. Finding the secrets is the challenge. Space Circus Catastrophe! is a terrible aberration of a retro game, it’s not fun or funny. This is disappointing considering that everything else in this game is done so well.

Strong Bad’s Cool Game for Attractive People-Episode 4: Dangeresque 3: The Criminal Projective is a fun story with simple but competent gameplay. The biggest complaint is that the puzzles haven't evolved. By the fourth installment I had hoped to see the challenge increase, but this is not the case. Despite that issue, this episode is the funniest and most creative episode so far and is the one to own. Chances are it would take you longer to say the title than beat the game. Ten dollars for 1-2 hours of gameplay is pretty steep, but there are other collectibles and goals to reach that will slightly extend the play time. Fans of the series should own this game already, and if you don’t it’s available on Wii and PC for $10 in the United States.