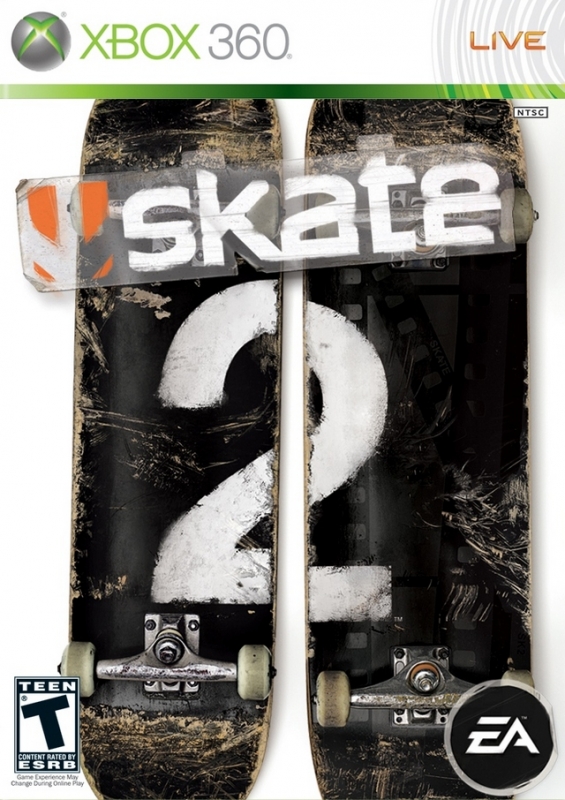 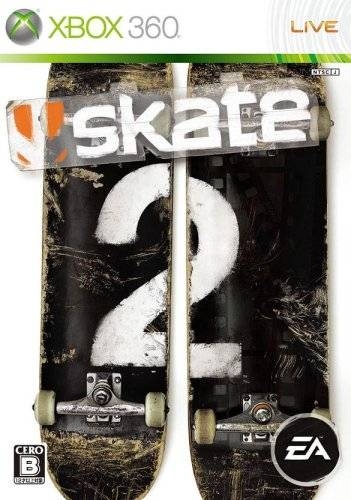 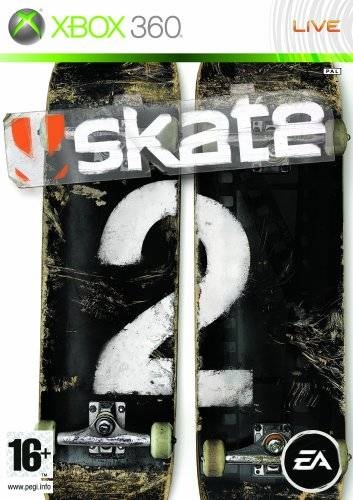 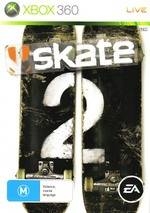 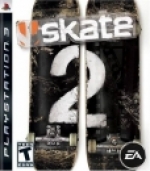 Skate 2 is the continuation of the greatest innovation in skateboarding video games since the first Tony Hawk, but unfortunately some issues keep it from being the skating nirvana that I had hoped.

When EA came out with skate in 2007 it was a wonderful shot in the arm to a genre that had stagnated with the dominance of a single franchise. The game had many great ideas, but was kept from greatness by rampant technical issues and lackluster visual presentation. The second game in the series promised to get rid of all of these troubles and make the game that the original was always meant to be. While they certainly succeeded in improving upon the first, the second title is not without its downfalls, unfortunately.

What makes skate games different than any other skateboarding games that have come out before it are the controls. Performing flip tricks is done by doing a sequence of movements on the right analog stock. As an example, an ollie would be done by holding the stick in the down direction and then quickly moving it to the up direction. The more difficult the flip you are trying to perform, the more complex the sequence you’ll have to do. Board grabs are done using the L2 and R2 buttons for the left and right hand respectively. Skate 2 adds in finger flip tricks, and more complex one foot board grabs. Pumping is done using the square or X buttons, and pressing both at the same time will allow you to do a hippy jump. There are many more moves than I have time to get into, but suffice to say that skate 2 does a good job of including all of the important tricks.

Once you are in the air, you can control the movement of your body using the left stick to do spins or flips, and control the positioning of the board with the right analog stick. The board positioning can be used to make sure that you land smoothly even if your body positioning wouldn’t allow for it. These positioning techniques are also heavily used for grinding in the game. Grinding is done by getting into the air, then tweaking your board and body to the grind you want before landing on the rail. So for example, to do a crooked grind you need to push the right analog stick up and to the right, to dip the front of your board down and to the right, then land your front truck on the rail you’re crooked grinding. This makes getting a specific grind quite the difficult task of positioning and timing your approach, and is probably the most fun I have while playing.

The biggest change for skate 2 is the ability to get off your board and walk by pressing the triangle button. Stairs are no longer just for gapping. While walking around you can move certain objects around such as kicker ramps and dumpsters. This allows you to create your own line of obstacles for specific trick sequences. You can also make your own 'spot' and put it online. Once online, anyone can download your spot and try to do the best tricks possible on the obstacles you have set up. Having someone else own your spot with the best score online is a great way to bring a sense of competition as you try to keep dominion over the spot you created.

The single player in skate 2 plays almost exactly like the original except with a different story tying it all together. You go from event to event earning money and gaining access to special skateparks that you couldn’t previously get to. The events range from races down mountains, doing specific moves to get on the cover of Thrasher, and contests in street and vert skating. Sometimes the events can be extremely annoying as you try over and over gain to get your skater to do the exact sequence of moves that is required, but usually they can be done in a couple tries by someone who knows their way around the controls. There are also some events that are for people who want a little less structure and more freedom in their life. Strewn around the city are spots that you can play 'own the spot' in. During this mode you are tasked with getting a certain number of points using obstacles within the spot. It is a great way to kill some time without the stringent requirements of most other events. Completing events can also give you access to sponsors for your skater and people you can call on your cell phone to get rid of the rail caps or to empty pools for you to skate.

The story to the game is that San Van has been taken over by Mongocorp, an apparently evil company that hates skaters and protects their property like it is Fort Knox. They put caps on all of the best rails and have employed a nearly ridiculous amount of security to guard anywhere you aren’t allowed to skate. This means that a decent amount of the challenge for some of the events comes not from the tricks you have to perform, but instead from trying to avoid the security as you perform all of these tricks. You play as a skater you create yourself (and you can be female this time) who apparently just got out of prison. It is alluded to that you are the skater from the first game, but for some reason you were imprisoned. You go through events gaining money with the intent of getting your reputation back as well as giving back to the community by funding a new skatepark. I really liked the ability to buy property in the game, but sadly it was underused because there are only two different properties to buy: the skatepark I just mentioned and an extension to Danny Way’s park from the first skate. This is really a disappointment since I was hoping that there would be many different properties that I could buy to make the entire city my playground again and get rid of Mongocorp, but no such luck.

If you do anything really worthy of note while playing through the single player you can edit a replay of a 30 second clip and share it online with others. The video editor in the second skate has some improvements from the first such as more camera options, but I also noticed some missing features such as filters that were in the original skate.

The online in the second skate game is very much improved. Along with the same modes that were in the first game, you also have the ability to create spots as was mentioned previously. The main improvement is that you can play games without the same unbearable lag that makes your opponents’ moves look like slide shows. There are still times when the lag can get severe if someone with a poor connection joins the game, but it is still a large improvement over the issues of the first skate. The local multiplayer is still the same as the first skate, which is unfortunate since I was hoping for some split-screen options in skate 2.

Visual presentation in skate 2 is largely the same as the first. The technical aspects of the graphics are the same as before, even down to the unfortunate framerate issues and texture pop-ins. The problem in skate 2 is that you are put in far more situations where the framerate issues will pop up. Every time you are being chased by more than two security guards at the same time the game will start to chug to the point that you’ll barely be able to get done what you set out to do. It is unfortunate they decided to tax their game engine before they fixed this issue. Stylistically the visuals are slightly worse than the first, but only because they decided to make everything look dirty since the city has gone through some tough times. This makes many sections of the city very unappealing to the eye, although I understand that it was by choice. My only other complaint is that the eyes on characters models are sometimes noticeably off, like they’ll be staring in two directions at once.

The music in the game is passable, but not really noteworthy. All of the tracks are licensed but there isn’t enough variety for people to listen to what they want, so unless you happen to like the tracks they provide skate 2’s music will be a lot like listening to a radio station you tolerate but don’t particularly like. It’s fine as long as it is in the background and you can tune it out, but you wouldn’t want to listen to it intently for any significant amount of time. The voice acting uses all of the famous skaters that you’ll see around, but unfortunately they kept the overly talkative Reda. Luckily Reda seems to talk a little less in skate 2 than he did in the original but he is still fairly annoying.

Gameplay is the real crown jewel of skate 2. The inherent difficulty of getting the exact trick you want means that there’s a real sense of accomplishment once you actually succeed. Grinding mechanics are the best of any skateboard videogame, giving you the feel of how real skating is as well as a video game has done yet. Vert controls are still not quite as fun as street but this may just be an inherent difference in the two play-styles and not as much something that can be blamed on the design of the game.

My first playthrough of skate 2 while getting all of the main events done was 16 hours long. The value of the title is further increased by the now passable online, and the ability to make and edit your own skate clips. The video editor is a great source of value, because hitting the exact line you want and making it look as pretty as possible can mean several more hours of fun and works well with the additional ability to move objects around for your video needs. Downloading other players’ spots is a fun addition that can add many more things for you to do while you free skate around in the career mode. The lack of split-screen multiplayer is still unfortunate, and any local multiplayer has to be done through turns.

Overall skate 2 is a slight improvement from the first game with many more tricks available to you, improved online and some very cool new spots to skate on, but there are also some unfortunate steps back that keep it from being a huge improvement on the first. The gameplay is just as fun as ever, making videos will eat up many hours and perfecting a line gives a true sense of accomplishment; but the lackluster visuals, forgettable audio, and unfortunate technical issues keep this game from being the best it could be. Any fan of the original skate or skateboarding games in general should be happy and satisfied with skate 2, but it still isn’t quite the perfect skateboarding game that I had hoped it might become.