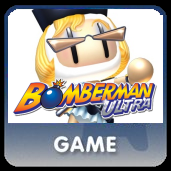 Bomberman and his multiplayer antics finally make their way onto the PSN - in ULTRA form!

It’s always refreshing to see a long running series of videogames flourish in terms of quality. That is exactly the way I view the latest round of downloadable Bomberman titles by Hudson in recent years, and Bomberman ULTRA is no different. Exclusive to the PS3 this time around, ULTRA may not be the best Bomberman game we’ve seen recently, but it certainly is a great one. Impressive visuals and smart AI tag along to make this one of the strongest multiplayer experiences the PSN has to offer to date.

By now, long time gamers should be accustomed to Bomberman’s grid-based bombing action and ULTRA builds on that premise well. Though it is optimized for multiplayer, there is a good time to be found for gamers seeking to play alone. One improvement ULTRA represents over its many predecessors is better AI. Computer opponents are available to fill any of the seven unoccupied player slots and beyond having three programmable difficulty settings, act more human-like than before. The AI can still mount a fair challenge but are no longer impossible to beat even if the game is full. The tweaks in the AI are probably due to the fact that most of the game’s trophy requirements task that you defeat computer opponents in certain situations. Whatever the reason, the improved AI greatly balances the gameplay making playing alone a far more enjoyable experience than before.

There are five gameplay modes available: Normal, Zombie, Paint Bomb, Bombing Run, and Friendly Fire don’t represent the best or most inventive game modes in Bomberman history, but are fun in their own right. Normal is the standard last man standing contest that has been a staple of the series. Paint Bomb and Zombie both revolve around painting the most tiles using the blast radius of your bombs. The only difference between the two modes is that you don’t die when you’re fragged in Zombie mode, but you do lose all your powerups and tiles. Bombing Run is just like the normal mode but accelerated to a frantic speed, and Friendly Fire is a free for all where the entire playing field is cleared of all blocks as players place as many bombs as possible to reach the score limit.

There are 13 unique stages to play with themes ranging from robotic factories to medieval castles. Certain game modes are only available on select stages which is a bit of a disappointment. One feature that is standard across all stages is the ability to turn on one of a kind arena features. The arena features vary from teleporters that transfer you from one side of the grid to the other, to twisters that dizzy anyone in their path. The arena features are just a small part of an entire suite of options to customize your gaming experience. You can tweak everything from the items available, to the AI difficulty, to whether or not eliminated player will get a chance at retribution by activating revenge carts.

Bomberman ULTRA is a well put together package. Graphically Bomberman looks the same in HD as he does in SD, but this game is still a looker. The game’s visual splendor is derived from its superb art direction. The menus, load screens, animations, and stages are all zany and colorful. The audio is similarly executed. The soundtrack mostly consists of remixed songs from Bomberman games past, but still holds up to today’s standards. A cacophony of wacky sound effects merge together as you’re playing to complement the action onscreen. Load times are lightning fast, hardly giving you time to savor the well-crafted art of the load screens. One surprise inclusion is the perky female announcer who commentates on the action taking place, naming items you pick up and such. I say surprising because she actually isn’t annoying and fits in quite well with the rest of the title, adding to the overall pizzazz.

Personalizing your character is a big part of the game. There are over 60 costume items to collect to help make your Bomberman a creation of your own unique design. Items are unlocked by collecting Costume Balls that appear at random during offline gameplay. Collecting a new Costume Ball is always exciting because it makes editing your Bomberman a genuinely fun experience. Not only does it look good, but I take a great deal of pleasure in being able to dress up my character with an eye patch, chin stubble, ballerina outfit, and gladiator helmet if I so choose. There are a ton of designs to mix and match and they all look great. A lot of credit goes to the artists who helped pull this feature off.

Of course a Bomberman game is nothing without a strong multiplayer, and seeing as ULTRA is essentially all multiplayer, there is a lot to like about it. Because the PS3 is able to accommodate up to seven controllers, you and six friends can locally bomb the living daylight out of each other within the comfort of your own living room. Even with the improved AI, playing against human players is still the best part of the game. Four players can even connect online to play in matches of up to eight. The online component is about what you would expect. Other than one or two visual hiccups, I found the online play to be smooth. There are tournaments to be hosted where players can vote on maps and game rules. Leaderboards and stat tracking are also available for those interested in keeping record of their performance.

For only $9.99, this game offers many hours of fun. Bomberman ULTRA does a lot of things right, including being user friendly, looking great, and keeping the gameplay familiar yet enjoyable. Truthfully, we’ve seen predecessors that boasted better gameplay modes, items, and stages, but the core Bomberman game is too much fun to fault for its lack of originality. All things considered, series veterans and newcomers alike are in store for one of the purest multiplayer games available on the PS3.