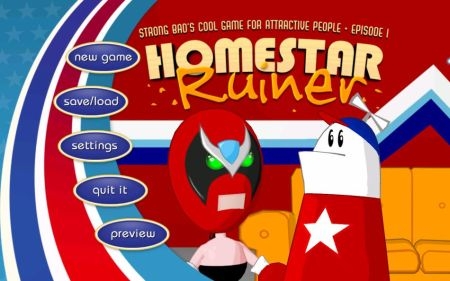 TellTale Games, the guys who brought you Sam and Max, and Homestarrunner.com come out with the first of five WiiWare/PC games centered around the Homestar Runner universe.

Let's travel back to the year 2000. The year that birthed one of the most popular web cartoons in history. Homestar Runner was created by Matt and Mike Chapman, two brothers from Atlanta, GA. It was not too long after the introduction of Strong Bad Emails, a weekly feature on the website, that the series started to gain an enormous fan base. Every Monday morning, I would go to school asking my friends, “Hey did you see the new Strong Bad email?” We would proceed to talk about the hilarious antics Strong Bad and his friends got into this week.

Today, HomestarRunner.com and TellTale Games released Strong Bad’s Cool Game for Attractive People: Homestar Ruiner, the first episode in a series of five that will be released monthly on the PC and WiiWare service. Homstar Ruiner is a 3D point-and-click adventure that will keep you occupied for many hours.

The story begins with Strong Bad planning to beat the ever-loving piss out of Homestar. However, his plan backfires and he ends up with a houseful of annoying guests. Strong goes through any means necessary to get his life back on track. To me, the story was a typical Homestar Runner story. It really felt like I was in a five hour long Strong Bad email. The characters were very near and dear to their old forms found on the website and the experience was quite enjoyable.

The gameplay was your standard point-and-click. If you have not ever played a point-and-click adventure, that is ok. Homestar Ruiner is not insanely hard and you can even choose to have hints turned to low, medium, or high. You play Strong Bad the entire game and travel around all the places you have come to know and love from the franchise, including Marzipan’s house, Strong Bad’s house, Bub’s Concession Stand, Strong Badia, and The King of Town’s Castle. There are a couple points in the game that I got stuck at, but if you use your head and just keep using trial and error, you should eventually find the solution that progresses the storyline.

I have to say I love the jokes in the game. Every item you click on, Strong Bad has some kind of witty comment to make about it. And most of the time, if you click the item again, he will say something different. Also, I never get tired of kicking The Cheat in the washing machine. Never.

As far as additional content, the game delivers. There are a total of four “trophies” to work towards in the game. There is also a retro, NES-esque game you can play. There is even a drawing table where you can make your own Teen Girl Squad comics! These are always fun to play with.

After completing the storyline, you unlock Extended Play mode, which allows you to roam the world talking to everyone about the recent turn of events (I wont spoil the ending!). This mode also lets you collect anything you didn’t collect during the storyline. I don’t think you are able to collect everything before the story ends, so don’t worry if you finish the game with some areas incomplete.

As far as visuals go, this is the first time we have seen the Homestar Runner crew in 3D. I enjoyed it, but the visuals were nothing to write home about. Just your standard Wii graphics. As mentioned before, the game's visuals, audio and storyline really resembled that of the website. I really would have liked to see a full length song or two in the game. Homestar Runner is known for having funny music videos and I did not see that reflected in the game.

Are there any differences between the Wii and PC version? Yes, but not much. On the Wii version, you can send pictures to your Wii friends. This functionality is missing in the PC version. And the way you control your snake in Snake Boxer 5, the NES-esque game, is different. For the Wii version you need to tilt your controller to move the snake.

This is definitely a Wii game. I cannot see it performing better on the 360 or PS3 simply because you use the Wiimote as a pointer and the Wii provides a more suitable demographic . If you are/were a fan of Homestar Runner, I would pick this game up. The game has a TON of references to cartoons and emails posted on the website. If you are not familiar with the series, you can still enjoy most of the jokes, however you may not understand some. If you go to HomestarRunner.com and watch some cartoons first the game may be slightly more enjoyable. Sometimes the game requires a lot of patience, but I still recommend it. Also, I had a little trouble getting to where I wanted to be sometimes (aka. Marzipan’s front door), but everything else in the game is pretty smooth. For $10 you can get a good five to six hours of fun gameplay in and I look forward to the next installment of Strong Bad’s Cool Game for Attractive People on my Wii/PC.