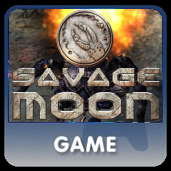 Another week, another PSN game. How does Savage Moon match up against the other great offerings available on the PlayStation Network? Read on to find out...

Savage Moon is a downloadable Tower Defence game available on the Playstation Network, and is the first foray into console gaming for its developer, FluffyLogic.

Savage Moon entrusts the player with the task of defending a mining base on a living asteroid, called an Imoon. Imoons are heavy in various vital minerals long depleted back on Earth. However, they have a natural defence system in the form alien entities known as Insectocytes. Recognizing the threat these Insectocytes pose, humans have developed various towers that can dropped onto an asteroid, each fulfilling a different task in order to protect the mine. These are the tools you are provided with in order to defend the base. Think Starship Troopers meets your standard tower defence game and you’re more or less there.

Perhaps you can do a better job of protecting the asteroid base?

First things first, Savage moon is not in any way spectacular. It’s a tower defence game and it doesn’t try to be anything more, which for me, as a fan of the genre, is entirely fine. For some of you however this may be slightly off-putting, but I don't feel this does the game a disservice, because it manages to achieve what it sets out to accomplish very well.

The game at its core is very solid. It provides great yet challenging gameplay throughout, and presents obstacles that the player must think fast to overcome, something which has long made the genre so endearing and, fortunately, it is not something that is lost in Savage Moon. To begin with, you only have a few towers available, and you must use some of your precious credits to research new ones. Credits are earned through various means, you have your starting amount, you are awarded different amounts of credits for enemies defeated based on their difficulty and current towers can also be sold for a percentage of their original cost. Towers can also be upgraded to a maximum level of 5, which radically increases the damage, fire rate, range and overall area of effect of the towers themselves.

At first, simple machine gun towers at a lower level are enough to take out your ground and even air opponents, but soon you will need to utilize and upgrade all of your available towers in order to be successful. Other tower defence games often allow players to rely on one or two towers while ignoring the others, but Savage moon does a very good job of making each tower play an important role in defeating your enemies. Even the simple blocking tower can be the difference between victory and defeat when faced with a particular wave of Insectocytes. The Insectocytes are also quite varied, from simple crawling spider-like enemies to giant ‘Tank’ Insectocytes capable of destroying your towers with long range bombardment. The variety of stronger, faster monsters keeps the player on their toes, meaning any complacency will be severely punished (most often with defeat, as I have discovered a fair few times).

A few lesser notes that shouldn’t be overlooked are the inclusion of a time bar, alerting you as to how long you have before your next wave. This is important as if you feel adequately prepared you can advance a wave, which results in a minor cash boost based on the time remaining. Stronger towers are also unlocked as you research the base tower, for example, once you research the laser tower the particle tower becomes available. Finally, you’re limited to the amount of towers you can place each wave by the amount of drop-ships you are provided with, so you must think carefully about which towers you feel you need to overcome the next group of Insectocytes.

Appearance wise, Savage moon is once again unspectacular. The tower effects are attractive, specifically the rather large mortar explosions which left me with a small sense of satisfaction, and the Insectocytes themselves are fairly detailed. However, the environments are mostly bland and replicated throughout each level, so it’s safe to say you will not be blown away by Savage Moon, but you will definitely not be put off by the graphics either. One minor flaw however is that during particularly intensive waves, the combination of multiple enemies and explosions and whatnot can result in very minor lag, but otherwise, it runs very well. For a PSN title, although the graphics may look slightly dated when compared with WipEout HD for example, in the end Savage Moon looks pretty good.


With all these waves, it can seem a bit hopeless; Thank god for mortar towers.

Ultimately Savage moon is a solid package; it combines the core elements that have made tower defence games so popular and added challenging maps, a variety of enemies and overall, kept it fun. Gamers not fond of the genre will most likely not find anything here to sway them. Those who would argue that, with only 12 levels it’s lacking in the value department, are reminded of the inclusion of a vengeance mode, which is basically a see how long you can survive mode for those masochists who love to sit through wave-after-wave of enemies, myself being one of them.

Additionally, whenever an Imoon is completed, you are given a summary of your performance, and greater performance can result in up to three awards if you achieve a certain score for example. There are also online leaderboards. And finally this tasty little package is rounded off by the lovely inclusion of a mixed array of trophies, a few of which I believe are fairly challenging, while others are pretty straightforward, and I can easily imagine DLC adding more levels or towers in the future. Savage Moon would be a welcome addition to most gaming libraries.