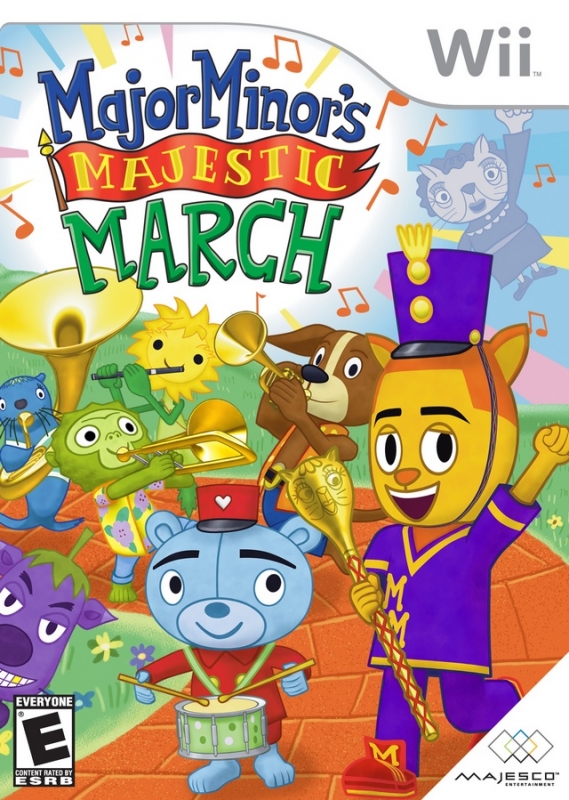 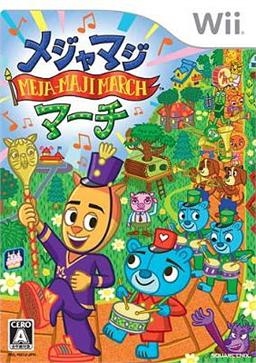 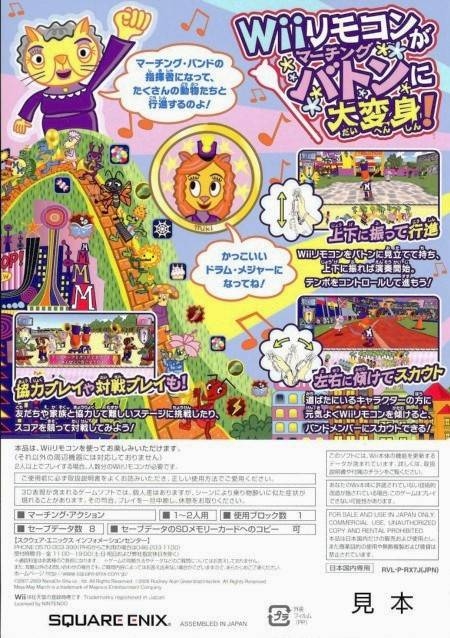 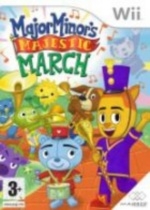 Major Minor and his band march onto Wii to the beat of... poor game design.

Before delving into Major Minor’s Majestic March, I often found myself curious as to why the game had seemed to rarely be in the public spotlight. Obviously, the game wouldn’t appeal to everyone’s tastes given the family-friendly art style and atmosphere presented, and the fact that trendy flavors and modern hits prevalent in your standard Rock Band and Guitar Hero offerings were substituted for a variety of classic marching band themes could alienate a few who consider themselves well-versed in today’s musical gaming scene. Most importantly, simplicity is intrinsic to Major Minor, and its gameplay prides itself on musical tempo controlled via Wii Remote gestures rather than acquired skill with a packed-in instrument. But hey, sometimes it’s just a quirky premise with a breath of fresh air that’s needed to make a game enjoyable, and how can you go wrong with a development team helmed by PaRappa the Rapper creator Masaya Matsuura? After playing through the main game in less than an hour (yes, an hour), it quickly became apparent why the hype-meter for the game never left the ground; the controls in the game lack any of the polish you would expect in a game completely motion-controlled, resulting in what is ultimately a frustrating and altogether unsatisfying experience.

Young Major Minor had the dream to one day become the world’s most renowned drum major, but unfortunately he had neither a band to play with nor anyone to teach him the basics of leading a marching band. That doesn’t stop him from pursuing his goal, because he soon inherits the Magic Baton from his great grandmother whose spirit actually resides in the baton. Not only does this Magic Baton allow Major Minor to start creating his band, but it also serves as a guide to the young drum major because his great grandmother’s spirit shines the light on how one uses the baton while offering words of encouragement as well. It’s all overwhelmingly simple and straight out of a children’s movie, but the simplicity in the plot works well to set up the marching band gameplay, and the world in which it all occurs is filled with an abundance of colors, an assortment of available band members and citizens, and short but sweet storybook-like cutscenes. All of this can be credited to another returning name from PaRappa the Rapper, talented artist Rodney Alan Greenblat, who has again provided a great sense of art direction to the gaming industry. A few objects in the environment do lack some polish, but that doesn’t detract from the lively atmosphere that the title touts very well.

From the get-go, and after players are treated to Greenblat’s creative style, irritation will be the prime emotion that Major Minor thrusts upon its newcomers. After the “Beginner” difficulty Single Player is picked (the only available mode at the start of the game), your talking baton that possesses the Great Great Grandma Gladiola (GGGG) spirit will begin the tutorial process that familiarizes players with the ins and outs of gameplay. Major Minor is controlled by swinging the Wii Remote in a constant and steady up/down motion as the Remote acts as the player’s makeshift GGGG baton in real life. While making sure that the Remote stays parallel to your body and speeding up or receding the up/down motion of the Wii Remote accordingly, Major Minor will mimic your motions and tempo in the game while marching on an A.I. controlled path similar to that of an on-rails shooter. As you are retaining an appropriate tempo, the Remote will also act as your tool to pickup both new items and band members by swinging either left or right depending on where the object is located on screen. And while all of this sounds way too easy so far, it probably would be if the swinging controls weren’t so poorly implemented. Even as GGGG is there to offer help if your tempo slightly off, it doesn’t matter, because switching tempo speeds never works the way it should. The game has a hard enough time just recognizing your motions. For instance, if you begin to swing the Remote rapidly enough, all of your motions will be recognized and translated into normal gestures for Major Minor and the band rather than the quick tempo you are attempting to create.

Thankfully, there is more to the game than maintaining a correct tempo, but again clunky controls don’t permit these areas to live up to standard either. Picking up the aforementioned band members is another large part of the game, and as Major Minor continues marching to the tempo you are creating, timing becomes the main focus for collecting these new members. As Major Minor inches closer and closer to available members, all of them will possess an exclamation point above their heads that, once it changes to the color green, will signify when to flick the Remote left or right to add the member to your band. This would have been a welcome addition to create a bit more excitement during gameplay, but it’s always a toss-up as to which way Major Minor will translate your gestures into on-screen motions. Flicking left may signal Major Minor to flick GGGG right and vice versa, and sometimes even maintaining a tempo will cause him to unintentionally flick the baton. It’s a shame, because adding members to your band (which can hold up to 30) is easily the best part of the game.

Almost all of the band members play a different instrument, and going from a band comprised of only drummers and a flute player to a band with drummers, flute players, trombone players, trumpet players and so on is really gratifying, and it’s also a joy to listen to the music grow and evolve not just exclusively on tempo, but on the amount of instruments you have going as well. Even better, after members are acquired they have their own mini-section at the bottom of the screen that shows all of your current band members and their current “moods”. March too quickly and you may upset your pig band member, while concurrently making your dog member extraordinarily happy. Marching too slowly will result in the opposite, and it’s important maintain a “middle of the road” tempo that allows all members to be happy. If you neglect to do this, or if your tempo is off, members will drop out of the band altogether and this initiates game over - a nice addition that would work better if the controls were smoother.

Items also change the gameplay but are regrettably picked up in the same way as band members. There are 11 in all (not including a character named Eggplant Fox who will try and disrupt your band’s mood if you accidentally point to him), and all influence your band in different ways. Again, if it were easier to obtain the items you wanted instead of haphazardly gaining them by chance, you would have another positive to add to the gameplay front. In addition, a little pizzazz and fun are thrown in through both “Drill Mode” and a points system. Drill Mode is a small diversion you can unlock if you have at least ten band members in your group. In the midst of marching the mode will pop up and ask you to perform actions like shaking or spinning the Wii Remote to earn points. Points can also be nabbed by determining how well you completed marching objectives, such as how many members you scouted and items you acquired. These points are tallied at the end of each stage, letting you know how well you performed compared to previous play-throughs.

With all of this talk about tempo and control issues, does the actual music itself suffer from drawbacks as well? The more than 25 traditional marching band tunes from around the world do not disappoint, and neither does the original music that is provided. Voice overs are also sprinkled throughout the title wherever dialogue appears, and GGGG’s voice can be heard through the Wii Remote speaker to further produce the talking baton effect. Where the title comes up awfully short is in the number of stages and the amount of time it takes to complete them. With only seven to choose from, all of which range from about four to five minutes, this game can be completed in an afternoon - tops. There are a few extras to be had, such as an added “Normal” mode that kicks up the difficulty, a Challenge Mode where none of the GGGG assists can be used, and short character descriptions for any characters received during gameplay, but more stages in the main play modes are sorely missed here. You can only replay a stage so many times, especially when they are all such short affairs. Upon the completion of “Beginner” mode, you also unlock both multiplayer and co-op modes for up to two players. Both are easily the best extras available in the title, but these modes should have been unlocked from the beginning.

At the end of the day, Major Minor is undeniably a disappointing experience for both newcomers to offerings from developer NanaOn-Sha and Masaya Matsuura, and also to fans of their previous efforts. While the title offers an innovative and exciting premise in theory, all luster is lost in controls that are poorly executed and in an alarming disregard for playable content. After you throw in some questionable design choices, like not offering a restart option during a stage (or even a pause button at all), it’s difficult to recommend the game to anyone interested. As GGGG often recites to Major Minor, “Keep on marching!” Masaya Matsuura and co., because I’m sure the gaming industry would love to see a fine-tuned rhythm title from you before the generation is over. But until then, I’m afraid we are all left waiting.