So we've reviewed the main game - Fable II - but how does its XBLA companion piece hold up?

Fable II Pub Games was originally offered up as a free incentive for people who pre-ordered Fable II from select retailers. However, it is now chiefly only available to download from the Xbox Live Arcade for 800 MS Points (£6.80/$10.00), a surprisingly high figure given that it was originally given away as a pre-order bonus. Add to that the all of the games featured within Fable II Pub Games can also be played in Fable II, and Pub Games struggles to justify that stand alone price tag.

The idea behind Pub Games is that you select a character profile within the game and play 1 of the 3 Pub Games which are to be found in the world of Albion. You gamble in-game money and either build up a mountain of debt or make loads of gold and win lots of bonus prizes which can then be used in the game (like a posh bed, or a health potion). Any winnings you make on that profile can then be transferred to your Fable II character to be spent on such homely things as furniture, clothing and prostitutes. 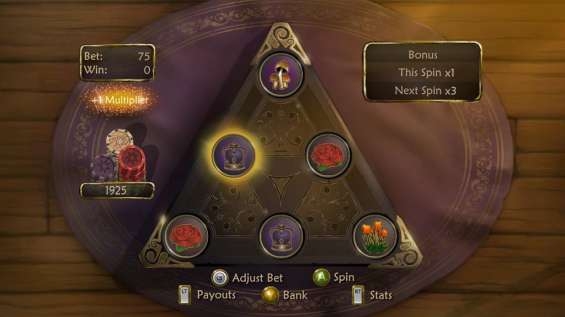 We’ll start with the worst game, and that’s Spinnerbox, which is essentially a slot machine game that’s been spruced up to look like something magical and arcane from the world of Albion. You just mash the A button on your controller and that causes a set of discs to spin. When they’ve stopped spinning if enough of the pictures match you get some winnings or some free spins (depending on which pictures they are). The pictures vary from game to game, as do the odds and the number of discs involved, but other than that nothing changes between the different types of Spinnerbox games. It becomes boring almost instantly because it’s based on pure luck and involves the player doing nothing more than mashing the A button constantly.

Next up is Keystone, which is similar to craps in that you wager on the outcome of the roll of 3 dice. The number rolled corresponds to a numbered stone on an archway, and if you bet on that stone you win. If the numbers 3 or 18 are rolled then the archway collapses and any remaining bets you made prior to the game beginning will be lost. The same thing happens if numbers 10 and 11 are both rolled in the same game. Whilst it requires more strategy than Spinnerbox and is therefore more interesting, it’s just as prone to tedium and luck, and grows boring quickly. 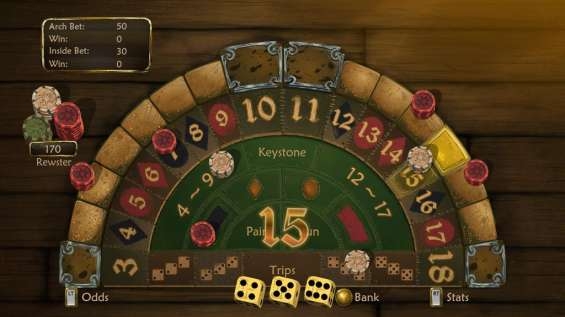 Finally there’s Fortune’s Tower, which is probably the best of the 3 games. There are a deck of cards numbered 1 to 7, and 4 ‘hero’ cards. You start off by placing a bet and receive one card faced down at the top of the screen. You then ask for a set of cards to be dealt and they’re placed below the card at the top of the screen. Each round you decide whether to take your money and run or add another layer cards. Each time you ask for a new layer an extra card is added, so eventually the pattern of cards forms a pyramid (see screenshot below). If at any point two cards of the same value line up then the game is over and you lose your bet unless a hero card has been dealt along that row, or the uncovered card at the top is a hero card, in which case the hero card ‘defends’ the pyramid. The key to winning is to hold out for as long as possible without 2 identical cards lining up, because each new layer usually increases the winnings (your return is based on the value of the cards when they’re added up), but it also increases the odds of losing it all as well, so you have to strike a careful balance.

Whilst Fortune’s Tower is the most interesting and innovative of the 3 games, it also suffers from the lack of variety and skill that the other 2 games suffer from. After your first few plays you will probably have discovered the most efficient ways to approach the games, so as well as being rather boring they’re also simplistic and lacking in depth. If you’re aiming to unlock all of the prizes that can be transferred into Fable II, you’re in for quite a grind. 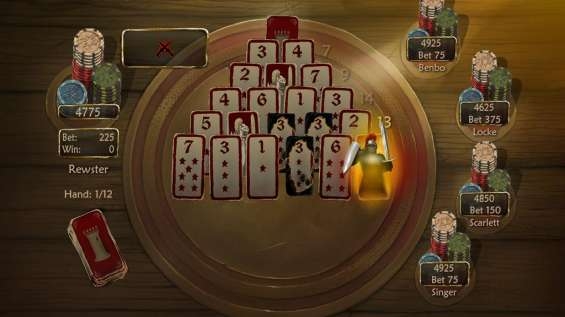 The presentation is quite nice. There’s nothing spectacular of course, this is akin to your standard card game on XBLA afterall. But what Pub Games does bring to the table in this regard is the great art style of Fable II. The games all have a slightly magical quality in their design, so the hero cards in Fortune’s Tower pop out and come to life when they’re brought into play, and the discs light up in a flourish of gold when you win in Spinnerbox. And it is a perfectly pleasant and inoffensive looking game, the colours are crisp and the tables are nicely detailed, and there are no graphical glitches or jagged edges. You get the standard sound effects that come with a game of this kind, so you hear the dealing of the cards, the spinning of the discs and the rolling of dice. There's also background noise which resembles the kind of background noise you would hear in a pub in Albion, but again, there's nothing remarkable that makes it stand out.

As far as extras go, other than earning gold and items for your Fable II character, there aren’t many. There’s the standard 200 Gamerscore points worth of achievements, some of which are quite time consuming, but they’re mostly relatively simple to acquire. There’s no multiplayer, although there are leaderboards (which, as is almost always the case, are dominated by glitchers and the ungodly). So you don’t really get anything you wouldn’t otherwise get just by buying Fable II (all 3 games are included in the main game, although they’re presented to you in a slightly different way).

What I genuinely like about the concept behind Pub Games, as opposed to the game itself, is that it has set a precedence for future retail games to tie-in a small taster offering (in the form of an XBLA title) that later contributes to your progress through the main game. It’s an interesting concept. Unfortunately it’s also an expensive one at 800 MS points, and certainly not worth the money. If you can still get hold of one of the free codes then go for it, a free XBLA game is a free XBLA game afterall, otherwise you’re not missing out on anything you can’t also get by buying Fable II.