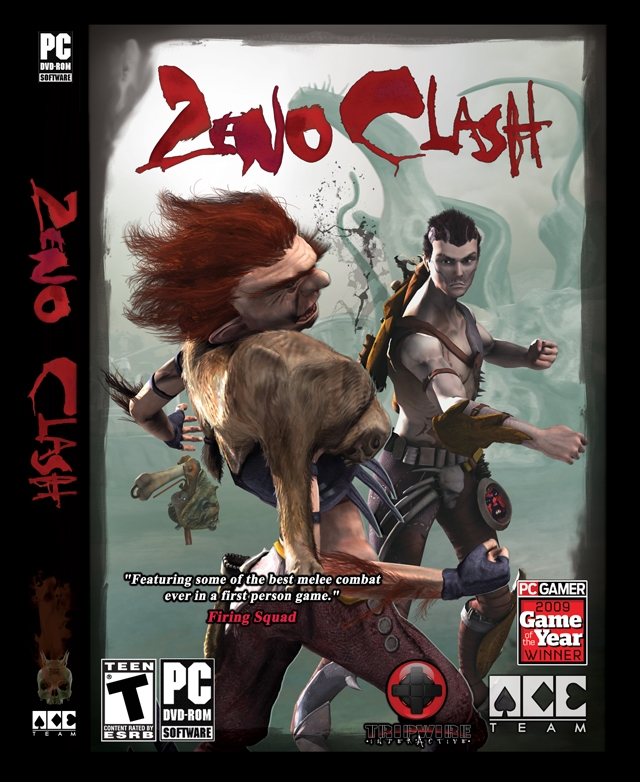 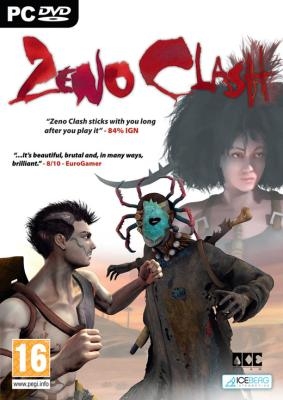 A tantalizing game that brings together multiple genres with a fantastic story.

Zeno Clash is a very different type of first-person style game. It is an action-fighting game which includes a good amount of gun play set in a first person view. This indie game developed by ACE TEAM has been granted many awards and was a finalist in the Independent Game Festival. Is this game  really the gem people make it out to be?

Considering the fact that this game is strongly based around its fighting controls, ACE Team had to figure out how to map it to the keyboard and mouse. The end result is a fantastic mapping that balances well and plays smoothly with the gameplay. Everything is set quite comfortably, making it so that you don't strain to accomplish even your most brutal of attacks. There is also an option to use a controller. I had no control issues with using a SixAxis controller after installing some 3rd party drivers.

With melee combat being the basis of the gameplay for Zeno Clash, it only seems fitting that it's discussed first. As stated above, the controls have been mapped perfectly, making it so that it doesn't feel strange to play on the PC. Combat controls are set as the two primary mouse buttons, and blocking is connected to the space bar. Everything else is based on movement. If you stun your opponent when you walk up to them while constantly holding the forward key, you have the option to use several brutal attacks. Running can also lead to some strong attacks like the ability to slam your elbow to your enemy's face. There is also a bit of melee weapon combat included too.The only thing that is different is that if you get hit while holding the weapon you will drop it almost instantly unless you block at the right time. There are also melee weapons in this game that do way more damage than the majority of melee attacks, but they are very slow to use.

Using the guns in the game takes things in a different direction. They can be greatly useful in some parts while in others become completely useless. This is ok though since it isn't the main form of gameplay. Guns can be used as a defense against the wild enemies that you will encounter throughout the game. The guns have unlimited ammo but you do have to manually reload once your clips run out. Even if you forget to reload or aim your gun, it will act the role of a melee weapon bashing your opponents to the ground with insurmountable amounts of force. Targeting is set to the right mouse button which further displays the fact this game is not a first-person shooter. The last weapons in the game are grenades. There is nothing too spectacularly different about them compared to any other grenades other than they are shaped as a skull. Sadly, grenades are virtually useless except for the wild animal attack sequences.

Taking two different forms of gameplay and sticking them together is a very unique experience. When in combat with one or more enemies, you will have to figure out what is the best combination to use. Most of the time hand-to-hand combat is the most effective route but sometimes there might be a weapon like the crossbow laying around which allows you to do some damage before your enemy gets to close. When in combat with multiple enemies, I found the best way to fight is constantly switching the opponent your battering till they are all dead. Creating counter-attacks is also one of the keys to victory. Timing your block just right, followed closely by a quick hit of the attack key, allows for a devastating attack. Heavy enemies do need melee weapons to defeat but there is always one or two laying around the arena. Just remember to take out the light enemies before taking out the heavy.

There are also some special sequences that happen in the story that call for different uses for the game's mechanics, only mattering if its the training parts where you learn your attacks or the mini-game in chapter 7 where you have to shoot rats with bombs before they get to close.

The Challenge Arena is an additional piece of gameplay that has to be unlocked by beating the game. After selecting one of five levels of the Challenge Arena's tower, you are set against waves of enemies until you reach that level's final boss. Afterward, the end result is ranked against other Steam Friends who have faced that level of the tower. Ranking is based off speed of completion. If you complete a level fast enough, you can receive a bronze, silver, or gold medal.

After some time playing all difficulty settings I found that no matter what setting you have set, the game is quite difficult. My first run through was on hard so I expected a challenge as this is the first game of this genre I have ever played. Enemies come at you fiercely with the goal of beating you as fast as they can. There are some AI issues though. It seems that the enemy doesn't try to or rarely blocks a punch. Even in the hardest difficulty, blocking seems like something the AI barely knows how to do. That said, play through the game on easy before cranking up difficulty. It will save some massive headaches during some of the later brawls.

The story to this game is very different from most. You play as a human-like creature named Ghat. During the tale, you are being hunted by his family for killing his clan leader and parent father-mother. Unlike most stories, there really isn't a depiction of who is the good guy and who are the bad guys. It is really up to the player to decide. Along the way, you meet many characters that are very strange but quite unique. For example, the Corwids who are creatures that have one solo duty; one Corwid does nothing but eat people while another walks in a straight line destroying anything in its path. You also have a traveling companion named Deadra to aid you during some of the animal attacks and other scenes.

The graphics are quite nice. They aren't Crysis level, but since this game isn't meant to be realistic, it's amazing. Everything is shaped strangely or has this special characteristic that makes it stand out. Even the beetles have this very odd shape to their back. This is all done because the Source engine. Its strength and a constantly improving engine can make it a very powerful visual tool.

On a technical level, visually the game looks good on any setting you put it on but maxing out all settings, with 2x anti-aliasing, does make some large improvements when it comes to the texture work. Look at the finer details like the skull on the wall, the wood, and even the ground. As everything is turned up, the better they look.

While 2x to 4x doesn't show that much difference, 0x to 2x does improve everything. Even the line work to symbolize veins get a bit more detailed the higher the anti-aliasing.

One major discovery I found was that changing all these settings doesn't seem to drastically hurt game performance. Normally in games, you crank up the anti-aliasing - your frames-per-second drops about 5%. In Zeno Clash it might drop 5fps if that.

Audio sadly is one of the disappointing parts of this game. The sound effects are there but something feels like its lacking. Maybe some really fast pace battle music would help during some of the mid-game battles, but after playing some random genres of music off my personal playlist, nothing really fit. There is this void that feels like it shouldn't be there, but when you try to piece whats supposed to be there, it doesn't work.

Overall, this game is phenomenal. There are very few games that I can say I simply enjoyed it so much I want to play it over and over again. There are really no major issues to this game other than Zeno Clash's story being only about 6 - 7 hours long plus the time that it takes you to run through the Challenge Towers until you get bored of it. The only thing missing that would make this game nearly perfect would be a multiplayer mode.