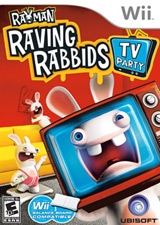 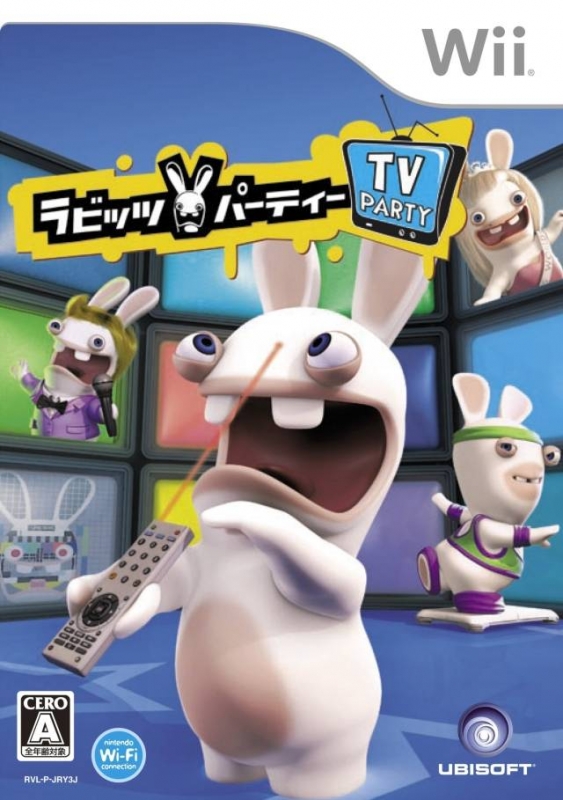 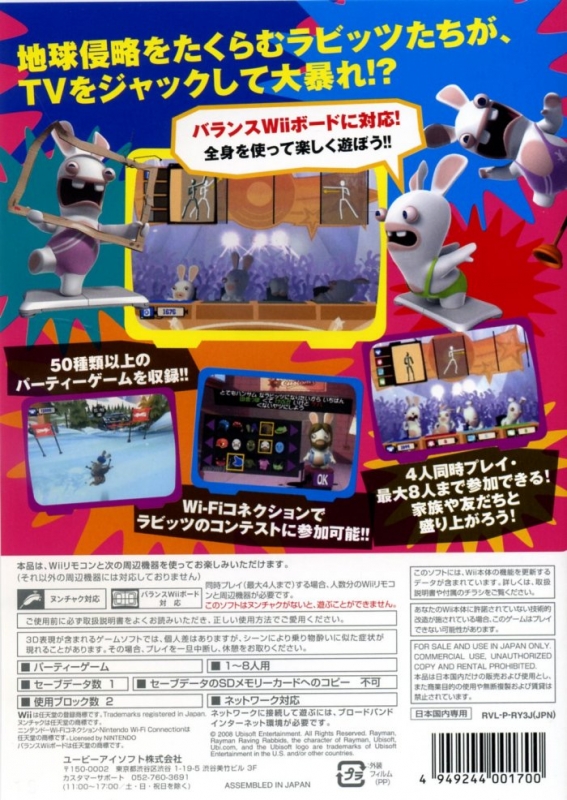 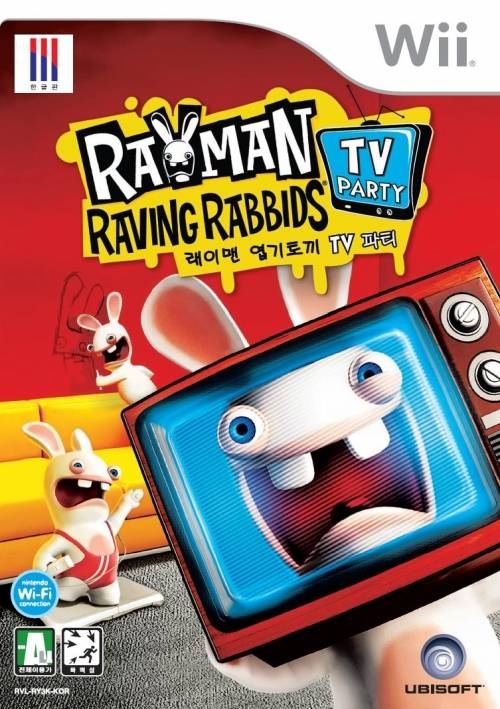 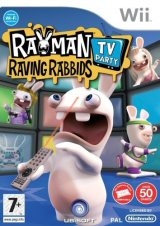 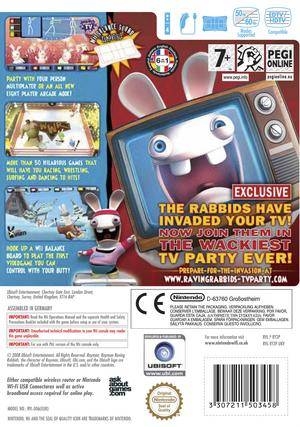 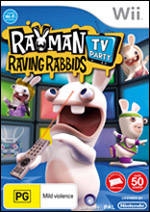 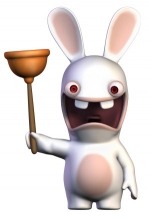 After only 1 year of silence the Rabbids are back and ready to take over your TV. Will the formula work a third time?

A famous videogame character, a new control scheme on a new console, and loads of crazy Rabbids whose infamous “BWAAAAAAHH!” can be heard from miles away – who wouldn’t buy such a game? Ubisoft probably thought so as well, releasing the first Raving Rabbids game just in time for the Wii's launch and its sequel only a year later. This year the young series sees its third instalment on Nintendo’s waggle console. VGChartz has reviewed the game for you, but does it live up to the prequels?

Usually I would talk about the story now but there isn't much to tell in this case. The Rabbids still want to take over the world. The first render sequence shows them hunting for Rayman who tries to escape. Suddenly they are hit by lighting and Rayman, thinking he is safe after entering his house, realizes that the Rabbids are trapped in his TV now.

First of all: Yes, there are some changes and I would like to point them out. As the title suggests the game is now structured like a TV channel. Instead of selecting mini games from a typical menu there is a timetable that shows the programme. It is up to you to select which show will be shown at which time.

The art style has also changed. In an attempt to fit the TV image better the Rabbids now appear in a rather cartoonish form, at least during the occasional advertisements (more about that later), the menu and the sequences that introduce each mini game. It is up to you to decide whether the cartoon style is awesome or annoying. It looks like a mix of cell shading and flash animation, which is a bit weird. But hey, at least it fits the theme of the game rather well.

The mini games themselves still feature the bunnies in their 3D version (and honestly, I am glad for it). Besides that the graphics haven't changed a lot. The game runs fluently, I didn’t discover any annoying slow downs or glitches. On the other hand it still looks almost exactly like the first game in the series, which is a bit of a let-down considering this is the Wii’s third Christmas already. All in all there is not much to complain about. Well, besides the cartoon style, which makes for about 20-30% of the playtime.

It would need an endless amount of space to discuss every single mini game TV Party offers, but I want to give you a short overview of what to expect. There are different “channels” most games fit into, among these are:

Top of the Flops - play drums, guitar, keyboard, or do the vocals. You will play to (more or less) famous pop and rock songs (all cover versions, though).

Cult Movies - the shooter games. You will play through scenes that mimic some classic movie themes, like mafia movies, classic horror films or Outta Space scenes. The special element is that you have to shoot the bunnies that don’t fit into the scene, like dinosaur or barbarian Rabbids . Personally I liked “cult movies” the most.

Trash TV/Macho TV - in Trash TV you will play through some sports or show based mini games. You will have to feed a moose with steaks or rescue a Rabbid who jumps from a sky scraper.

Advertisements - sometimes the game will ask you to press the 1 button on your remote for a short break. In the following advertisement you will have to perform a certain movement with your remote to make something happen. If you succeed you will see a funny advertisement and get some form of advantage for the rest of the mini game

Yeah, the infamous sound of the “Raving Rabbid Scream” will haunt you quite a lot in the game. To put it more precisely, there is just one way for the Rabbids to communicate with you and that is by screaming (don’t worry there are text boxes as well). Sometimes it will make you laugh (when one of the little guys has to wear some ugly clothes for example, just for the fact that it fits the scenery so damn well). Sometimes it won’t. But at least you always know which game you're playing , no matter how drunk you are.

The “Top of the Flops” games let you listen to cover versions of songs like “Ladies Night”, “Toxic” or “Born to be Wild”. Most of the time sound is decent and supports the scenery really well. The “Cult Movies” soundtrack imitates the style of classic movie soundtracks . Generally speaking, I was pleasantly surprised. Just don’t expect to find future all-time classics in the game.

This is the really interesting part now, and probably the one a lot of gamers consider to be important when they try to make a decision on this game. To put this straight: In general the Balance Board games work out rather well. If you play alone you won’t feel absolute joy while playing the butt-controlled mini games, but once some of your friends head over to your house, you will be amazed by the pure awesomeness of watching someone sitting on his butt skiing. And the game where you have to ride on a moose was staggering to say the least. The butt-controlled games are really fun for the most part and the control is precise enough to win a game because of your skills and not just luck.

There are some bad examples as well, though. In one game you play as Godzilla, standing on the balance board to control where you spit your fire. This one was truly lame. In general, balance board games where you stand on your feet appeared to be much more boring than the ones where you actually control the game with your bottom. It is possible to play those games with the Wiimote + Nunchuk combo though.

What’s still missing in the end now is my opinion. Should you buy the game? Yes, but only if some of these factors are true for you. First of all, you really need a Balance Board to get the most out of this game, but unless you're interested in Wii Fit or another game that supports the peripheral you probably shouldn’t get a Balance Board for Raving Rabbits 3. Despite some flaws, the Blanace Board really adds to the experience and makes the game more interesting for people who have already played one of the previous Rabbid games.

This brings me to my next point. If you have played both games in the series already you should really ask yourself if you want to buy this game as well. Personally, I owned the first game in the series but later sold it to a friend, so I didn’t get tired of the Rabbids for some time, but I cannot guarantee you that the game is going to feel as fresh to you if you own both of the prequels.

Finally , the game is best in multiplayer. While some of the games are better when you play them alone, it was definitely more fun for me to play the game with my friends. It is up to you to decide here, as I can only give you my opinion. Fans of the Raving Rabbids will buy the game anyways and I see no reason why you shouldn’t if you like the series. People without a Balance Board or those who are a bit tired of the series should give the game a rent before they make their decision.