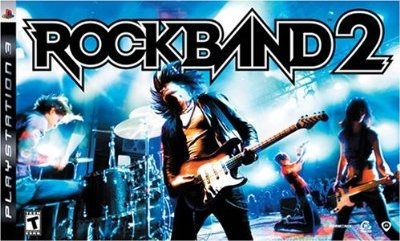 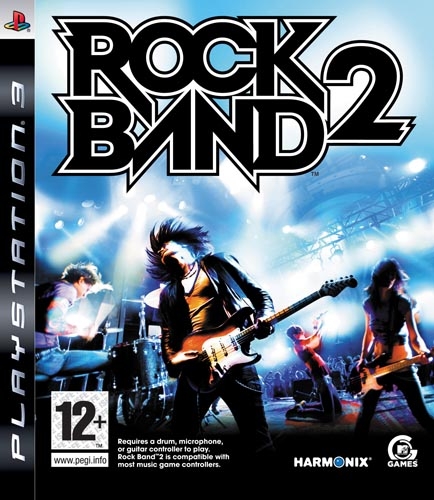 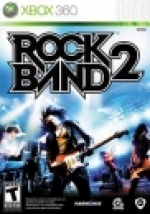 I got blisters on my fingers.

Frequency, released in 2001, by developer Harmonix was one of those innovative games that set the Playstation 2 apart from the rest. It featured frenetic rhythm-based gameplay and put the small developer on the map. The critically acclaimed title may not have been a big commercial success but it gave Harmonix presence in a unique niche that would soon grow into a major lynchpin of the video game industry. Since that first release in 2001, the Cambridge based firm has shaped the rhythm-game genre by creating popular games like Karaoke Revolution and the perennial franchise; Guitar Hero. However, corporate circumstances created a schism between the experienced designers and the very franchise they nurtured from birth. Activision bought Guitar Hero’s publisher and the name, while Viacom purchased the talent at Harmonix. It is with this twist of fate that Harmonix, under the Rock Band moniker, reaffirms their dominance in the music-game genre.

Rock Band 2, available on all major platforms, is the culmination of this team’s experience since 1999. It features a similar game design to Frequency and Amplitude. The notes travel towards the metronome and rely on the input of the player to activate the sound at the correct time. This is the core rhythmical design. Those playing will need to follow the beat in order to become successful. The game also has elements from Karaoke Revolution. Any soul who decides to sing instead of play an instrument will use a mic and follow the pitch as it scrolls from right to left. Interestingly, the pitch is what the player is scored on and not the actual lyrics. Finally, Harmonix put everything they learned from Guitar Hero into the instrument design. This made it possible to successfully expand from one guitar to a full band set. The gameplay in Rock Band 2 is very fun and never gets old. It has been tweaked to perfection in this iteration and all the mechanics under the hood are firing correctly. This complete package makes for a delightful game that features everything available in the music-game genre. However, simply refining the three major components of the gameplay was not enough. The developers took a close look at Rock Band and expanded many of the game modes available.

The most noticeable changes can be found in the Tour Mode. In this mode a solo tour or multiplayer band tour can be started, which is a welcome improvement over Rock Band. Like in Rock Band, the newly created band can go on a world tour. The band starts from humble begins from the city of the players choice and as they play venues locally and on the road, they gain fans and money. As the virtual band grows in popularity and gains more money, new gigs and cities become available. Rock Band 2's world tour expands on the solid foundation laid in the first title. First, the band can purchase employees that will effect the way the band gains both fans and money. Here the ultimate crossroads in every band's existence can be virtually played out; to sellout or not? Having more fans offers many benefits, yet having more money offers many benefits too. It’s a decision that plays well with the feel of the game. Another huge improvement is the online component for world tour. Those are really the only big changes in this mode, but two new additions make up for the lack of change here.

Battle of the Bands is a leaderboard driven competitive arena in Tour Mode. My wife and I can now use our band, Decimating Orange Gourds, to battle or compete with another band. These battles are presented like tournaments and are available for a limited time. They are always ongoing and offer excitement in checking often for what there is to do next. This ingenuous addition adds an indefinite amount of replay value to the Tour Mode. Also added are Tour Challenges. In Rock Band downloaded content was only available in Tour Mode by using custom setlists. This is no longer the case in Rock Band 2. Tour Challenges are dynamically updated based on available songs for download. These challenges also add many playing hours to the Tour Mode long after beating the game. Having these arenas alongside the redux of the Rock Band world tour offers plenty of game for the competitive hardcore.

The core gameplay for quick play and co-op is familiar, but not unwelcomed. On each song it is possible to get up to five stars (or 10 stars counting the gold stars) based on the performance. There are some augments available for the scoring. Star power makes a return and is used to save failed band mates and also drive higher scores to yield more stars. For every ten notes hit in succession a 2x multiplier is awarded for a maximum of 8x. When playing as a band2 this really helps drive up the score as each band member can get a 4x multiplier (bass can achieve 6x) and in addition the whole band receives a 2x multiplier for each member using star power. If a band member with a 4x multiplier uses star power and the other three also use star power than the effective multiplier for the original member is 32x. This type of scoring design results in very close collaboration among the players and such teamwork is the essence of Rock Bands 2’s philosophy. This is a social/party game that increases in value and fun exponentially for every person present.

The party does not stop at team-based play. Competitive modes are also to be found. Like co-op these rhythm sparring matches can be taken online or played locally. More than likely they will be played locally with a group of friends and a case of beer. Tug-of-war and score duel are the two competitive modes available. These are unchanged from Rock Band, yet they still remain entertaining. Game modifiers, like “No Fail”, also add some legs to what is possible with the game. If a group of friends or someone who is playing solo, just wants to have fun a screw around (or even if they want to add challenge) the game modifiers are there.

Every player can customize their own Rocker. This is in essence an avatar that can be made to look how each individual would like, albeit rather limited. The cash earned from Tour Mode can be used to purchase clothes, instruments, and body art. It all works very well, but it’s not particularly impressive. The best change in this system from Rock Band is that each avatar can now be moved and used however the player wants, across both bands and instruments.

Training Mode in this game is no slouch. It is not a throw away mode included only for beginners. In Training Mode a song can be practiced by changing its speed and tempo and switching through difficulties. Drum Training offers lessons on many drum techniques routinely employed in Rock and Roll. And the greatest feature in Training Mode is a toy that everyone should have; the freestyle drummer. In this mode a MP3 of choice can be played over the television and the drummer can freestyle to the song. This is something everybody does naturally and with this mode a virtual drum can be added to the mix instead of just an air drum. This is the kind of simple idea that makes a game like Rock Band 2 so unique.

The music is easily the most important aspect of this game. Rock Band 2 offers a value that is unprecedented. The disc comes stamped with 84 different tracks, most are made from master recordings. Inside the game box is a coupon to download and additional 20 tracks from either Xbox Live or Playstation Network. And for those who are upgrading from Rock Band, for 5 dollars, 55 of the 58 songs featured on Rock Band can be transferred to Rock Band 2. Those 55 songs will reside on the Hard Drive like downloaded content. That is over 150 songs for about $59.99, no other music game offers such a deal. In addition, new songs are available for download on a weekly basis. The actual song selection is superb; it has some of the greatest rock songs from the last five decades and is not limited to greatest hits or iconic singles, which is quite refreshing. One compliant about Rock Band was the lack of difficulty, well with Rock Band 2 that is no longer a problem. There are many songs that are very difficult across all instruments in the Hard and Expert settings. The serious gamers that have followed music games since the original Guitar Hero will be very pleased.

The instruments have been greatly improved over the original Rock Band. The new Stratocaster guitar features an appealing wood grain, large buttons that are responsive, and a newly designed strum bar that is now more responsive and has a tactile click unlike the original. The drums have remained almost the same with the exception of one major aspect, they are much quieter. Being an apartment dweller, I cannot over emphasize how important this improvement is. Even the bass has all new hardware. The bass is also a bulky Fender design with a strum bar that is split into two. This allows the emulation of playing a bass the way they are really played; by walking the index and middle finger. Both bass and guitar have an improvement that is invaluable and proves that Harmonix listens to feedback. The ‘start’ buttons have been shielded that way they cannot be accidentally pushed during gameplay.

The presentation in the game is top-notch. It is not the prettiest game out there, but it does not have to be. The attitude and feel of the game are sufficiently represented with the art design of the venues and characters. Some really nice touches are added with the camera work and overlays, making each song feel like a rock concert or rock/punk video while at the same time never being distracting. The music, as mentioned is incredible and many timeless tracks are featured. However, there are some unfortunate presentation issues. The issue that will grate the most nerves is the loading time. Each song takes a considerable amount of time to load, even on setlists. Another problem is the reuse of material from Rock Band, such as the aesthetic in world tour. It looks exactly like the original and that is simply lazy.

Rock Band 2 is the best music/rhythm based game on the market. It fosters a team spirit that will brighten up any social gathering and still carters to hardcore music players. The game features compelling online modes, especially Battle of the Bands, and refined and polished rhythm mechanics. Viacom has made a dedication, and they are living up to it, to support Rock Band 2 with new content weekly, giving the title potential for years of replay value. It’s a complete package that improves on the first and sets the standards for all the imitators to aspire to. Most importantly, Rock Band 2 is something every game should want to be; pure, simple, unending fun. The music/rhythm genre is still in its infancy, and as Activision seems to do everything in their power to over saturate the market, it is comforting to know that the true innovators behind the scenes are committed to keeping the genre fresh and novel.