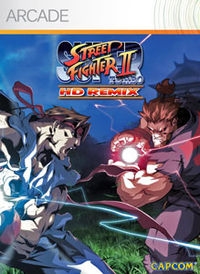 Street Fighter II gets a new update, is it worthy? Find out in our review.

Do you believe in love at first sight? No? Well, you should, because it happened to me the first time I saw Street Fighter II (SFII) in my local arcade. The machine still had that ‘new’ smell that seduced me like the perfume of a beautiful girl and I decided on the spot that I would do my best to master this game. Unfortunately, I was not the only one with such ideas, and I had to endure long waits in line just to enjoy a few minutes at the joystick for a chance to battle others for the right to remain playing. SFII quickly became one of my favorite games and is one of the ones I spent the most money on in the arcade days.

And why not? Street Fighter II is doubtless one of the most important game sagas in the history of the industry. The game conquered the hearts of gamers of all ages and walks of life, eventually even reaching our very homes through the SNES and the Genesis.

Street Fighter II represents a turning point in the history of 2D fighting games, and is possibly the most influential game ever in that genre. Most of the ensuing games measured themselves against it, and this influence prevailed even when the genre reached the 3D stage.

Such a solid base was well exploited by Capcom, serving as the model for a series of revised and expanded versions that flooded consoles everywhere throughout the years. Some of the most recent of these were those released for the Nintendo Virtual Console and the not so glorious version released some two years ago of the classic Street Fighter II Hyper Fighting (XBL). But after that prolonged drought of new content we now receive what I consider as probably the best and ultimate version of the game in the form of Super Street Fighter II Turbo HD Remix.

We once more have the 17 traditional characters--Ryu, Ken, Chun-Li, Zangief, Guile, Dhalsim, Blanka, and E. Honda, the big bosses Vega, Sagat, Balrog, and M. Bison, as well as the newcomers Cammy, Thunder Hawk, Dee Jay, and Fei Long, and Akuma. Thankfully, the fighting styles and techniques of the combatants have been well-respected. The control scheme is also the same and we once more return to the classic distribution of controls through six buttons (three for punch and three for kicks). In fact controls have actually improved when compared to Hyper Fighting. A few lags and glitches remain unsolved in both the 360 and PS3 versions, but they’re only present when using the D-pad since the game works perfectly with the joystick.

The game modes have been expanded, although the core concepts remain. We can now choose between original or HD modes when fighting the campaign. They both generally play along the same traditional path, and the most noticeable difference is the ending cinematic, which in the HD version is done in a refined anime style, while the other has the usual old ending video. However, there is a more subtle change that you may not necessarily notice right away. The HD mode has been readjusted to offer a better balance among fighters and these power adjustments have been approved in consultation with some of the best players around the world. Both HD and original have four difficulty settings. The other game modes remain exactly the same: practice, quick game vs computer, 1vs1, tournament (supports up to 8 players), ranked fights, and unranked fights.

The most awaited game mode addition is doubtless the Online, something that was attempted earlier in Hyper Fighting. However the online in that version yielded mixed results due to common lag and slowdown, which limited our match-up possibilities and rendered more than a few games simply unplayable. HD Remix avoids all the negative variables and gives us a better online experience than before. They achieved this by letting us select other players by their ping, thus permitting us to steer away from any potentially unplayable games.

Other added functions are the classic statistics of each player, both in the general matchmaking as well as with friends, voice chat, several achievement markers (highest number of throws, for instance), Party Mode & Arcade, and even the option of observing other players combat while your turn comes up.

However, I need to stress above all the outstanding technical refinement of this game. Super Street Fighter II Turbo HD Remix can be played at 1080p, thanks to the arduous redrawing job done by the artists at Udon Entertainment, who not only provided the improved character designs (which are more anime-inspired and youthful), but also the upgraded backgrounds. The good job done on the sprites stands out to as well. It is simply awesome to see your favorite characters of yesterday rock your screen with vibrant and sleek new looks, without betraying their original essences. The sound is consistently good throughout the whole game, and you can choose between the original themes and ‘modernized’ versions. In both cases the compositions are masterpieces with songs as mythical as Guile’s theme, just to mention one. All sound effects have been re-recorded with a better, more refined depth and clarity. As was the case of the graphics and the musical background, you can also choose between the new and the old sound effects.

This game is almost all you could have expected of it. It's a memorable update of an unforgettable classic made all the more irresistible by the best graphics ever seen in a 2D fighting game, with spectacular animations and awesome anime-style endings—despite being made up of still frames. Add on top of all that a worthy online mode, a more balanced damage adjustment for each character, and accessible controls and you wind up with the near perfect dream package.

Near perfect, but not quite. There are still a few observations worth mentioning. The controls are still quite deficient when using the Dual Shock 3 and somewhat unresponsive when using the 360 control pad. You could correct this by resorting to a joystick, but we consider that it’s quite unfair for a game to demand the purchase of peripherals for optimal operation. Finally, the much beloved bonus stage is gone (no more beating the hell out of a classic car!!!) and a few bugs persist on the online games (the music and the health bar occasionally disappear). What is even worse, the online ranking system crashed a while back raising the ire of the more competitive players. It’s worth noting that a patch has been promised to address all these issues, and should be only a few days away now.

So here we have in a nutshell the triumphant return of a timeless classic that gives us far more to thank for than to complain about. This is a game bred from nostalgia and reborn by the magic of a new era. Doubtless the best version of Street Fighter II to date and an event that no true lover of the original series could let go by unacknowledged.