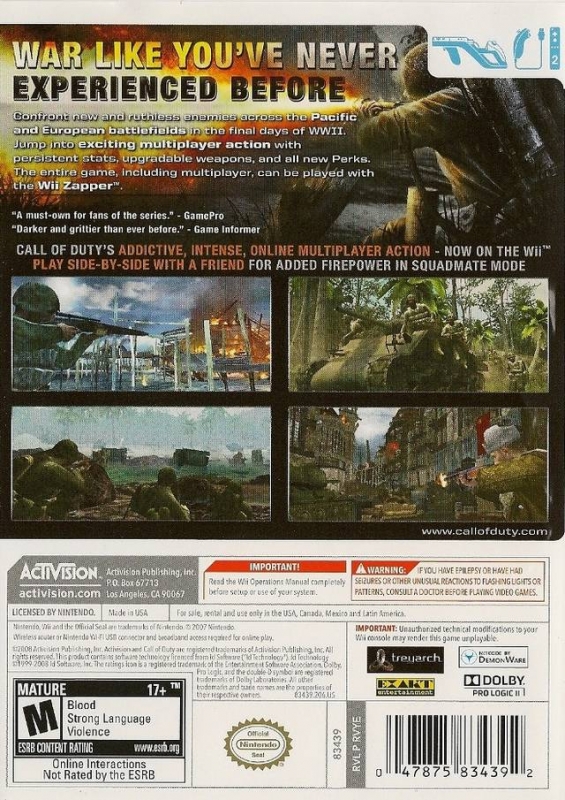 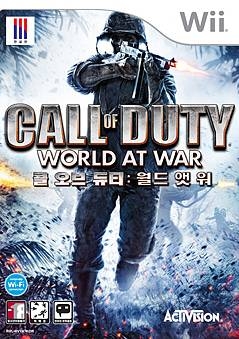 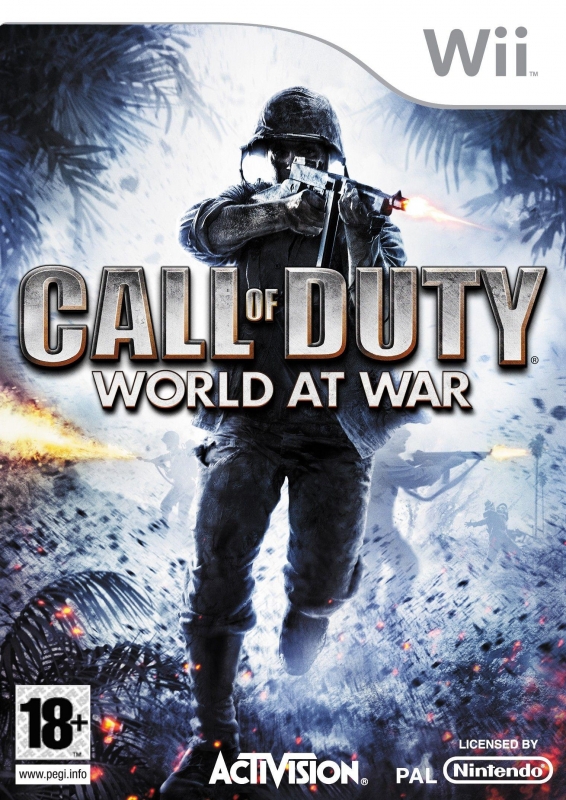 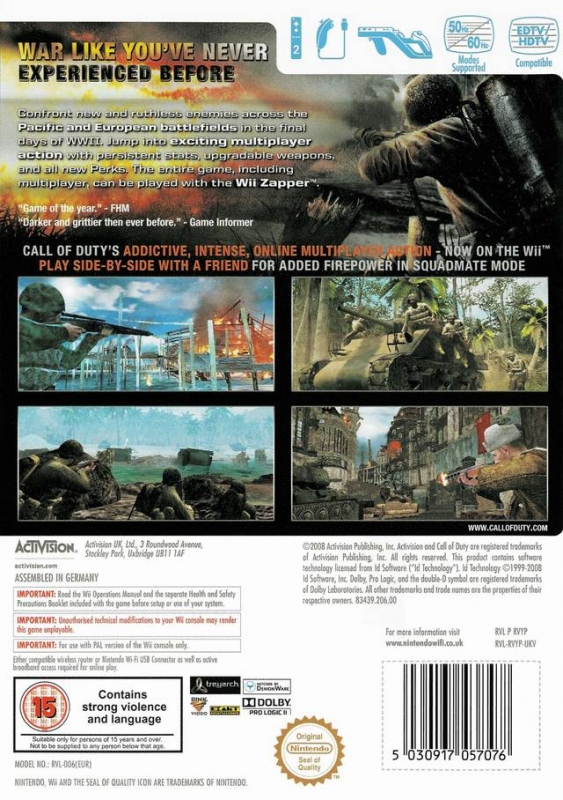 Fighting Nazi's just got better with your Wii remote.

Call of Duty goes back to World War II, one of the most tired and over used wars of all time, and this time Treyarch is back on board to make Call of Duty: World at War. As much as this game was set up to fail in comparison to Call of Duty 4, since Treyarch made the hated Call of Duty 3, and is set in a time many gamers want to get out of, Treyarch have surprisingly made one of the best World War II shooters. This game does some surprising things on Wii, for one they used the Call of Duty 4 engine, which allows this game have some of the best graphics on the Wii, and does some things many people and developers thought to be impossible on the Wii (now we’re seeing who’s just plain lazy). This game is no slouch and shows what a developer can do on the Wii even if the title is for multiple consoles and PC.

World at War has some really nice looking enviornments.

On the technical side you have the Call of Duty 4 engine running perfectly smoothly on the Wii, which means the game retains the same feel as Call of Duty 4’s core gameplay, as well as having nice graphics. The AI is tough even on normal mode, though a little cheap on higher difficulties, and the menus work very well and are easy to use. The one gripe is not having fully customizable controls. The controls have presets for button layout, bounding box size, etc., but the turning speed and many other features are more customizable, so while it’s not the customization of Medal of Honor Heroes 2 make no mistake the controls work better on World at War. Add to that some of the best online and best competition on the Wii FPS-wise and you get a nice overall package for any shooter fan.

The story of World at War is split up between two different fronts, one being Americans fighting the Japanese, and the other the Russians fighting the Germans. You play as two different soldiers whose stories both start off in a similar near-death fashion, but are then rescued and become a key part of their squadrons. The story is split up among fourteen different missions, seven on the Russian side and seven on the American side. The story itself is rather long for an FPS, it’s very cinematic but not quite as impactful as other stories in the genre.

"Got any questions about propane... or propane accessories?"

The graphics on World at War are top notch, in a few of the single player missions you sometimes think about how great it really looks. It’s a pleasant surprise, and it’s much better than most Wii efforts, and for now it is the best looking Wii FPS. From the awesome fire effects, to the building and environment detail, to the amount of characters on screen at one time, you’ll see what a third party game should look like on Wii. The downside to all these great graphics is in the details, you can be running along and see the actual textures load onto vehicles and things in the environment, it looks nice when it’s loaded, but when you see tank treads go from a blurry mass to getting detail it’s a little disappointing.

The sound effects are very realistic, the sound of gunfire, the explosions going off, and the voices of people all sounded amazing, especially on surround sound, you feel like you know where the people are just by the direction of the sound. The one complaint is the music is a bit too subtle, it’s there, but it has too little power to it and is very forgettable.

Gameplay is where World at War really shines, and even though there aren’t as many options as Medal of Honor Heroes 2, the controls still feel a bit tighter and work really well with the Call of Duty system of weapon weight. With IR support you’re getting one of the tightest, fastest, and most intuitive console FPS games ever made. There is also Wii zapper support, although I wouldn't personally recommended it, it does work well for what it is.

Some missions require you to be a little more sneaky.

The single-player game is tough even on the normal modes, you’ve got to plan out your assault and not go in Leroy Jenkins style or you will die every time. Treyarch did a good job with level design and setting up good defenses to hold you back, so you actually have to think about the task at hand. The AI has its ups and downs, there are times when it can be pretty smart, but at other times it can be dumb or cheap. Your teams AI works fairly well, they help you along but can jump out in the line of fire unless you cover them. The enemy AI will focus on your team so you can actually sneak around for an attack, but after that they will focus on you, and your team will not help you much. On the higher difficulties you have grenade spam and it can get pretty annoying.

Multiplayer is limited to eight players and online only, and consists of your basic free-for-all and team deathmatch modes. If you’re looking for the definitive online experience it’s not here, maybe on the Wii for now it’s the king of FPS, but if you’re looking for the total online package search elsewhere. The Wii version of World at War doesn't include Zombie mode, War, Headquarters, Sabotage, or Search and Destroy modes, nor is there full offline multiplayer support or Death Cards. The co-operative muliplayer is limited to local squad mate mode, which allows the first player to play like normal, but all the second player can do is control a reticule and shoot on the same screen as the first player.

Lots of effects will go off at one time and not one bit of slowdown.

Add the long single-player with the leveling system of multiplayer (where you still get your prestige modes, unlockable weapons and add-ons, and experience system), and you’ve got a package you can sink a lot of hours into. The lack of modes hurts the value a bit, and the game could use a few more maps, but overall it’s a solid package.

Whilst it is limited in modes, and it is stripped down from the other versions, this shouldn’t discourage you. There’s a ton of fun to be had online, you still have intense matches, loads of weapons, and levels galore. Even though it has fewer players and modes it’s actually a bit faster paced than the other console versions, and you can set up traps faster, cover points easier, and it's a lot easier to watch your own back. Couple that with solid servers and few disconnects and it’s a good online package.

Using the Wii Remote to shoot Nazis is VERY satisfying.

Overall, World at War is a great Wii game. For now it’s the king of FPS on Wii, and if you’re looking for your shooter fix on Wii, you should really look into it. It’s fun, it’s intuitive, and a solid package in both single and multiplayer. Treyarch delivered on putting the Call of Duty experience on Wii properly, they've certainly left some room for improvement (which will hopefully come from some of the upcoming FPS titles on Wii), but if you’re a Wii fan and a shooter fan this should be in your collection.