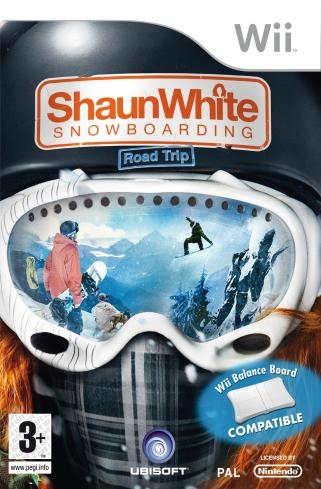 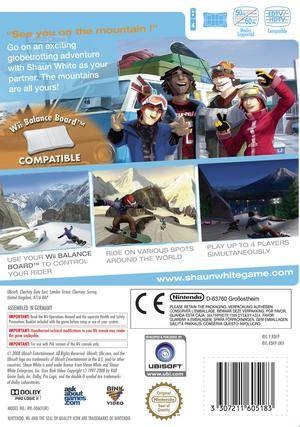 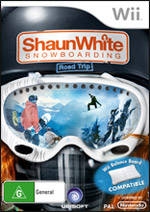 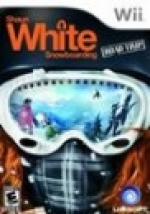 The Balance Board compatible snowboard game turns out to be a very good and unique experience.

WOW! That was literally the first thing I thought when stepping on my Balance Board and hitting the slopes for the first time in Shaun White Snowboarding: Road Trip. This is the best snowboard game in a long time and that’s mostly because of the near-perfect and very addictive Balance Board controls. The device clearly allows for gaming experiences that wouldn’t have been possible with regular controls and snowboarding is an obvious genre that benefits from this.


With the Balance Board steering and jumps can be controlled with your feet. You’ll additionally use the Wii remote to do carving, accelerating and tricks. Like on a real snowboard, you stand on the board sideways. You turn your boarder by shifting your weight forward or backwards. By also pushing the B-trigger on the remote you can carve, meaning less speed but more control. Jumping is done by actually 'jumping' (while keeping touch with the Board!). While airborne you can perform tricks by pressing the A and B buttons and moving your weight to the different areas of the Balance Board. This does take some time to get used to and to get full control over, but that makes it much more rewarding when you eventually get the hang of it. There are quite a few tricks that can be performed, from simple grabs to 360’s with backflip. Unlike its more sim-like HD brothers, the Wii version is much more arcade like. The grabs are done by the different button combinations of the Wii remote while the spins are mostly controlled by using the Balance Board. Add in the motion sensitive Wii remote controls and you can make fantastic combos after some practice. The correct landing, which means rebalancing at the correct time, will gain you a 10% bonus. All in all the trick system is pretty simple to pull off, but very difficult to master, which adds depth to the game. Rail slides are a bit too easy though, since it’s very hard to fall off of a rail. A harder setting for more experienced Balance Board users could have made grinding a real challenge, which is something Ubisoft should think of for an eventual sequel. The sensitivity of the Board can be calibrated in three different settings before you start, which ensures a fluid experience for everyone. It’s hard to describe this way of controlling a snowboard game, but it feels great and basically re-invents the genre.

This game is clearly meant to be played with the Balance Board but surprisingly the Wii remote only option is very solid as well. You hold the remote in one hand (no nunchuk compatibility in the game) and steer by turning it around the vertical axis. The A button is used to increase speed and B will let your boarder carve. Giving the remote a quick flick will cause you to jump. While in the air tricks can be performed by pushing the A and B buttons in combination with motion controls. You can switch between Wii remote only and Balance Board controls instantly, so if you’re tired of playing standing you can move to the couch right away. The tricks will become a lot easier to perform using just the remote though, but it never becomes so easy it breaks the game.

You start off with three boarders who, guided by Shaun White, will travel the world in order to catch up with the Flying Tomato. The Olympic champion will contact you by telephone and e-mail challenging you to try out new challenges and destinations. On a world map you can choose the area you want to board in, but in the beginning only Canada is available. Each location has several different courses and each of those can have several challenges. The contests are great, but a little bit more variety in the challenges and courses would have helped. After three locations you have basically seen everything the game has to offer. Add to that the fact that the courses are pretty linear, with minimal ways to stray from the path and that the basic components of each slope are more or less the same, and you could become a bit bored when you’re halfway through the game. The challenges basically consist of racing, collecting and trick contests with a few half pipe contests thrown in as well. By beating the challenges you can earn Dare and Respect medals, based on your achievement, which are used to unlock new areas and characters. Each of the boarders has his or her specialties and the unique thing about Road Trip is that you don't switch snowboards, but have to pick different characters to get the maximum achievements. A nice touch is that you can choose a cameraman who will follow you on the slope. Based on your choice you which will earn you special abilities, like super jumps and extra speed boosts. Nothing spectacular, but a nice touch and a testimony to the effort Ubisoft has put in developing this game.

The graphics also prove this point. Often developers are accused of not putting enough effort in making Wii games, especially on the graphics front, but Shaun White Snowboarding: Road Trip looks excellent. Instead of going for realistic graphics, that would have made this game look rather pale compared to its 360/PS3 counterpart, or going for the “kiddy” look, Ubisoft made the right choice of having a cool anime look. It looks like a mix between realistic and cell-shaded, which works very well and gives the game its own unique identity. Both technically and artistically Shaun White is one of the most impressive games on Wii so far. From the characters to the environments everything looks very detailed and well polished. Snow sticks to the character, tracks are made in the snow, there’s lens flaring and the character animations are very fluid, even in the air. I didn't find any framedrops or hiccups either, which makes for a nice and smooth experience. The loading times before each level are a bit too long, say 10 seconds, which becomes a bit annoying after awhile. The great variety in visual style between the various locations does make up a bit for the similarities in the tracks. Japan for example features a nice neon-lit course while the environment in Chile is rough and barren. The surrounding mountains have loads of detail and the draw distance is quite spectacular. The menu’s and in-game HUD are all done in a consistent “cool” style that really adds to the overall “snowboarding way of life” atmosphere it tries to simulate. The “menu” where you pick your rider and cameraman is actually inside a typical surfer/snowboarder VW van, where you also have access to your e-mail (which will mostly contain funny spam, which is a nice detail) and memorabilia of completed challenges. The sound is also of high quality, with excellent sound effects, the the same great soundtrack as the HD versions of the game, which means an outstanding mix of old and new licensed songs, ranging from Blue Oyster Cult's “Don’t Fear the Reaper” to “We Come One” by Faithless. Also the voice acting is very well done.

The single-player mode is decent in length, in total you'll find some 25 different courses of which most contain two or more challenges, but the split screen mode adds a lot of multiplayer fun to the package. Up to four players can play against each other both simultaneously or taking turns and there's a genuine co-op story mode where you need to earn medals cooperatively. The game supports only a single Balance Board, but I don't think that a lot of people will have more than one around the house anyway. And as pointed out earlier the remote controls are definitely sufficient to have a good time. With such a complete package it's a shame that no online mode or leaderboards were added. Sure there's still plenty of value in the game, but that would have made it outstanding in my book.

Shaun White Snowboarding: Road Trip is the best extreme sport game for Wii yet. Most of that is definitely a result of the great Balance Board controls that truly re-invent the genre, but even with just the Wii remote this is a solid game. The game is very stylized and polished and has great multiplayer. In short this is a must have for everyone into the snowboarding genre or those who want to make more use of their Balance Boards. I would even go so far as to say that for those who doubt about buying Wii Fit, Shaun White Snowboarding Road Trip is a great reason to do so.