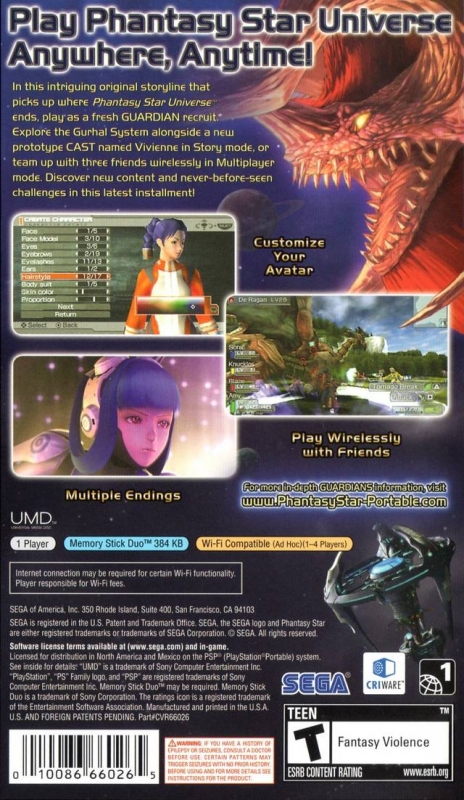 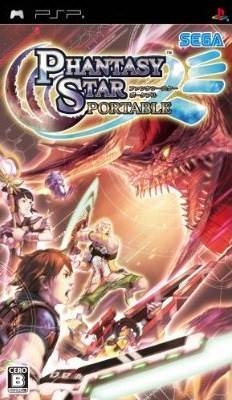 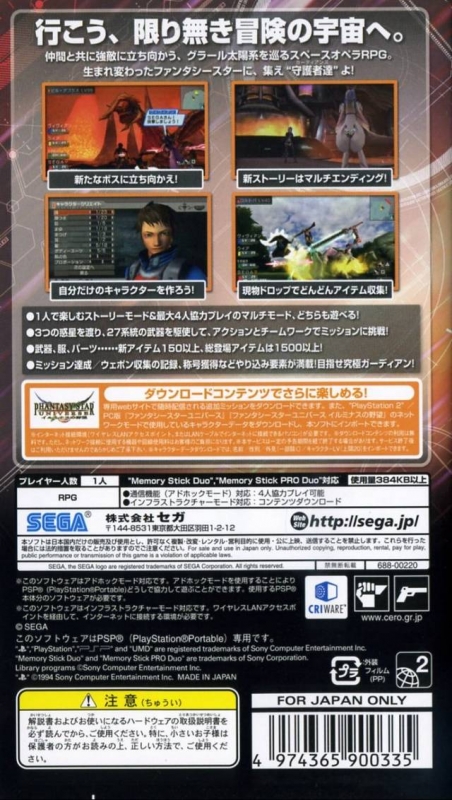 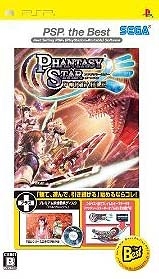 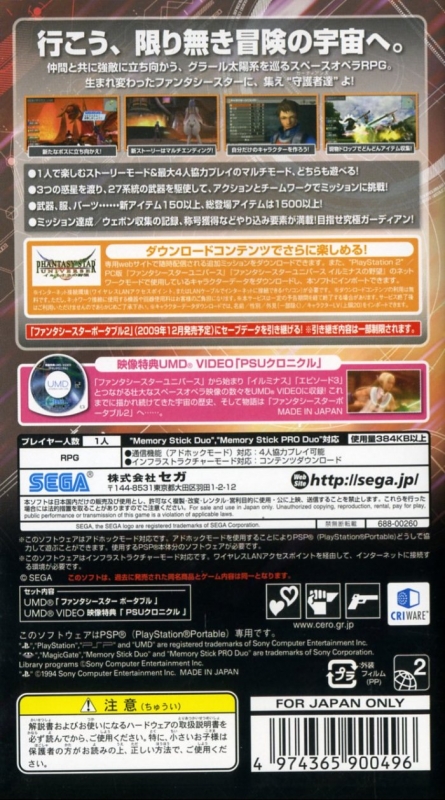 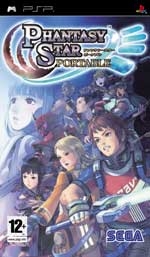 Presentation - 9.0
Gameplay - 9.5
Value - 10
Best PSU game of the PSU Series, Sega and Alfa system did it all right when they went portable.

PSP is Exclusive to the PSP, lol sorry just had to say that.

"Phantasy Star Portable" is based on Phantasy Star Universe and its latest expansion, Ambition of the Illuminus. The PSP title includes an all-new story mode since it takes place between PSU and AofI with added missions and a multi-player mode that supports local multiplayer cooperative play with up to four players. Two new characters have been introduced since Phantasy Star Universe: Vivienne, a CAST whom the main character teams up with throughout the story. Also new to this PSP exclusive PSU game is Helga Neumann, a villain who is responsible for terrorist attacks in the Gurhal System.

Features - Players can create their own character using the following settings: face, face model, eye color, eyebrows, eyelashes, ears, head type, body color, porportion, jacket, pants, shoes, voice type, and voice pitch. Character creation is said to go even farther than past games.[1][2] The retail version includes the option of importing the character created in the demo version of the game as well as two downloadable missions: one allows the exchange of items called "Weapons Badge" for items and weapons and another that consists of a time attack against defeated bosses. At the moment, these two extra missions are only available in the Japanese version of the game. The game also has eight slots for saving characters, opposed to only four in the Playstation 2, PC and Xbox 360's PSU and AotI's edditions.

For those of you who has a PSP... Demo - On February 5, 2009, the English language demo for North America was released on the PlayStation Store. The North American demo, like the Japanese demo, allows you to level your character up to level 20. Players can choose between three classes: Hunter, Ranger and Force. The four playable races in the demo include Beast, Cast, Human, and Newman. The demo allows players to complete two missions in the Story mode. The game also allows the five multiplayer missions to be played solo, with optional assistance from AI characters. The missions include a battle with De Ragan, an enemy from Phantasy Star Universe. There are C and B variants of this mission. Players can also transfer characters between multiplayer and single-player.[3]

Previously rumored to be removed from the North American release, the demo supports uploading save data to the full version of the game.

Reception - Phantasy Star Portable was the 14th best-selling game of Japan in the Year 2008, sadly so far in its USA version release its overlooked by many other JRPG's on the PSP although still sold and is selling decently well for an underrated franchise.

Boss Monster - In-Game Graphics for THIS Portable game are INSANE!!! Gives Crisis Core AND God of War Chains a Run for its Money!

Also getting around is much easier then other PSU games because instead of running around randomlly for hours you have a nice quick menu thing which acts like a "Side Scroolling Board System" which makes the game move nice and smooth as was as quick and easy, Load times are nearly non-existent to.

Other then a few Frame-Rate drops in big areas or HUGE boss battles, nothin takes its toll on this game it plays better then the other two on the PS2 and X360 combined. Also the Character Creation is Top-Of-The-Line, it was well made and perfected by Alfa System.

Story - 8.9/10 - Okay for those of you who know and PLAYED the PSU series you'll most likely know the PSU games thus far have been utter SHAT when it comes to the story line, its been bland and rather upsetting and on top of that ALL VOICE WORK be it Japense Dubs or English Dubs in the last 2 games have been almost non-existent, well guess What!?

Not only does Phantasy Star Portable HAVE a frickin story this time around it has nearly FULLY VOICED content and its pretty damn good in general as a story.

Infact i'd place it even over a few PS2 games as well. this part of the game was a surprise since the other 2 games story-lines have been crap (PSU) to fair (PSU: AotI) but PSP takes the cake in terms of storyline by a longshot, Well done Alfa-System its official, Alfa > Sonic Team. :P Oh and as a Side Note, you take a BIG part in the game yes your own Created Character can Alter the games ending in 3 Ways, Good ending, Bad ending, Or Normal ending.

Depend'n if your an Ass or a Friend to Viv. I got the Normal ending lol guess i was a Semi Ass/friend.

Sound/Music/Voice Acting - 9.3/10 - The Sounds Effects in PSP are used from PSU and PSU: AotI but it sounds Cleaner on the PSP for some odd reason, with that aside there are quite a few NEW exclusive sound effects since there are over 150+ New and exclusive weapons only on the PSP.

As far as Music went, overall alot is the same, BUT there were quite alot of new "Remixs" and Tweaked sound-tracks in PSP from the ohter 2 titles that fits MUCH better in the Si-Fi kinda feel/way also the "Final Battle Music" is up there with the one winged angel, and the final boss has an Attack of the one winged angel to come to think of it.

And as for the Voice acting for the English dub Version (OMG YAY! DUBS FTW LULZ!!!) It was AWESOME, Wow, the last two what very few voice acting it even HAD sucked like hell, This time around though it was cool most of the time, only a couple of characters sounded odd (Laia & Karen) but overall its one of the most enjoyable voice work This Gen so far, one things for sure the voice work in PSP is better then IU and SO4, though... not as good as VC's its still better then those two at most other current Gen JRPG's for consoles.

ReplayValue - 10/10 - This is were PSP Shines, the replay valued for PSP is epic over 300 hours easy, and thats being kind since you can create a total of 8 characters AND with a buncha of Side-Quests and In-Game Guardians achievements (No not XBL achievements lulz.) so yeah, if you want a long lasting JRPG for your money PSP is the PSP game for you lmao!

DLC - 10/10 - When the DLC content comes State-Side you'll have an extra 100 hours on your hands easy, atleast from what i've heard.

Overall - 9.1/10 - I've got to admit, i wanted to HATE this game alot when i first layed down the $40 for it, BUT thankfully i was wrong, just because the two other games are equal to shat or FFXII doesn't mean the entire series will.

Best game on own on my PSP as of right now, and quite frankyly the 3rd best JRPG i've played this gen, its right up there with VC at number 1 and SO4 at number 2 for me.

In conclusion, PSP for the PSP is a great game, and Quite frankly The BEST of all 3, Sega finally did the series right when they went portable, i was personally about to quite the series altogether if Portable Sucked, but Loath & behold it was Awesome.

At least as far as i see it anyway for what its worth.

I liked it so much i hope they make the 4th one for the PS3 or something, because of this game it deserves an HD game atleast ONCE this gen. Great Job Sega, you've been been good with me alot this gen, your now my fave JRPG company with Tri-Ace. *Kicks Squeenix in the ballz* Yay! Sega + Tri-Ace > SE!!!