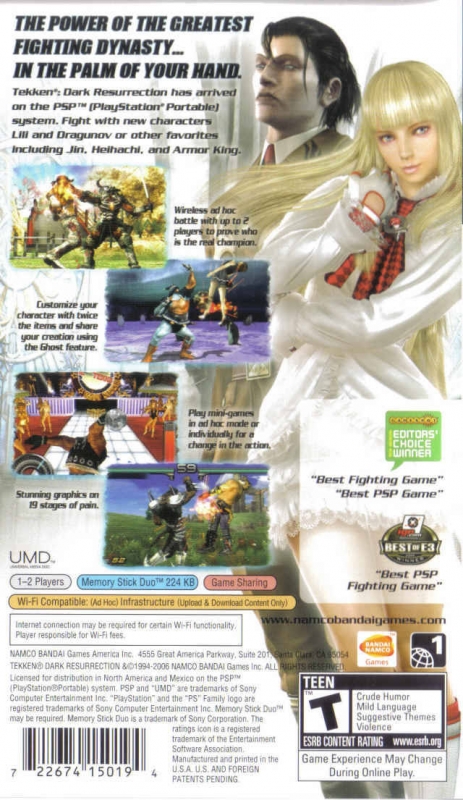 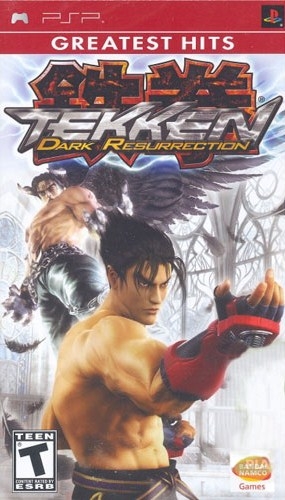 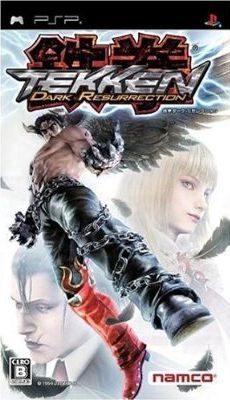 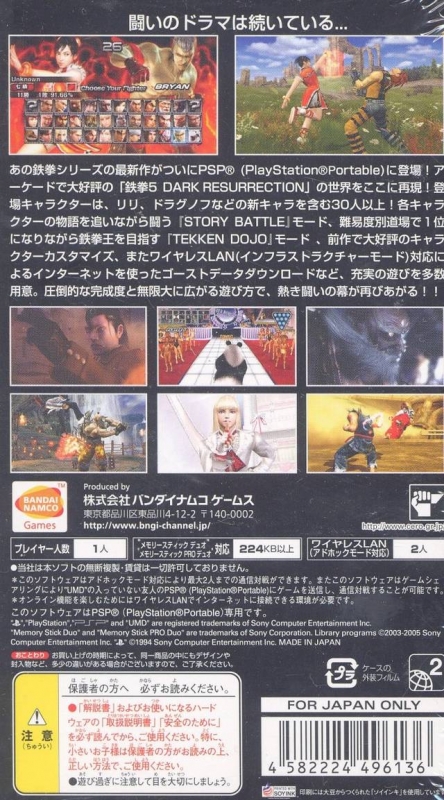 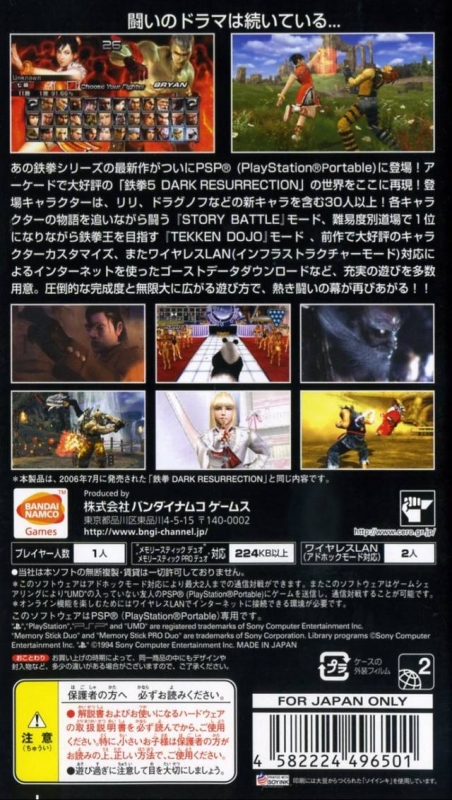 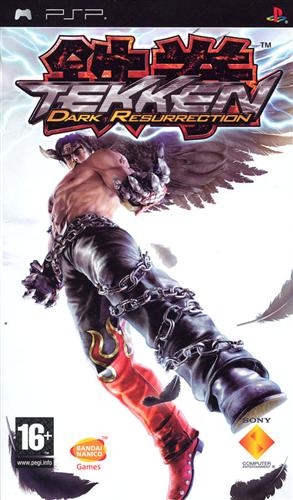 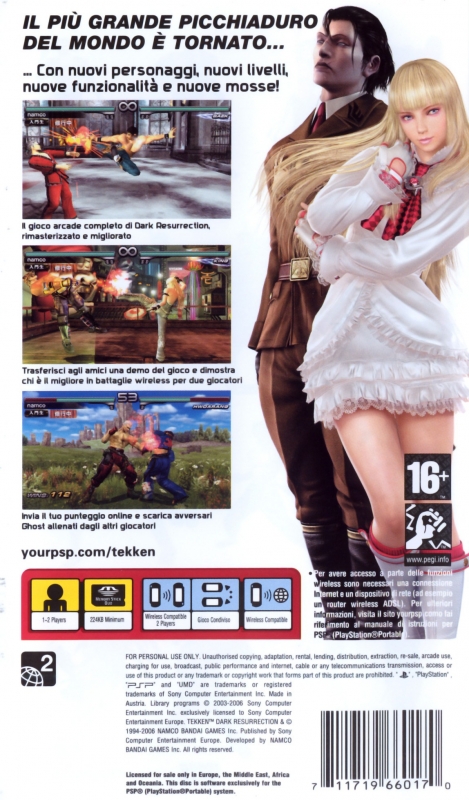 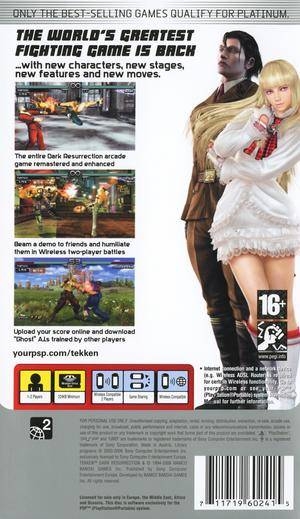 Tekken it wherever you go! The King of the Iron Fist in the palm of your hand!

Every series has a black sheep. For the hugely popular and long running Tekken fighting series, that black sheep is undoubtedly Tekken Advance. A failure with critics and at retail, the 3D fighting mechanics just could not hold up on the Game Boy Advance and made a strong case for never porting the series to the portable arena again. However, with Tekken: Dark Resurrection on the PSP, Namco manages to rectify their past mistakes by delivering a near-pitch-perfect arcade port that is, quite possibly, the best entry in the series to date.

Originally an enhanced arcade version of Tekken 5, Dark Resurrection boasts more customization options, greater balance, expanded story elements and two additional fighters, all of which make their way to the PSP perfectly intact. From the initial startup, this game feels tailor-made for the portable as an informative tutorial introduces the spot on controls and basic fighting mechanics. The D-pad and four face buttons provide intuitive controls and sharp response times allowing the player to be as aggressive or reserved in their playing style as they wish. Analog control is also available, but the limited range of the PSP's analog nub can be unbelievably imprecise and unwieldy.

The basic 1-on-1 fighting is fast paced, well balanced, and most importantly, fun. Oftentimes relegated to the label of a button masher, in reality Tekken lands somewhere in the middle ground where novice players can achieve a modicum of success by mashing buttons, but bouts between two seasoned players can seemed perfectly choreographed. Interestingly, the block mechanic is automatic when no buttons are pressed, which emphasizes good timing. Pulling off explosive combos is done by stringing together attacks, building up a natural progression of hits, and for the most part it’s kept somewhat grounded in reality. Don’t expect many hurling fire balls or stylized finishes here, folks. Instead each character has about 35 unique moves to master, tailored to their style of combat. Quite often you will find yourself discovering new moves by accident while playing through fights. Other vital techniques include evasion, grabbing, counters and special attacks that deal an significant amount of damage with a single blow.

Dark Resurrection features the largest character roster to date for the series. 35 fighters, ranging from kick boxers, to martial artists, to animals and every fighting niche in between. In the absence of a create-a-fighter option, the look of each character can be customized with a wide array of accessories and other attire options to add a personal touch. These accessories for your character are purchased with points you earn for winning fights or pulling off special moves. All your favorite characters are here- Jin, Heihachi, Steve, and even Eddie--with new moves to boot. The two new characters, Lili (a wealthy heiress with a penchant for street fighting) and Dragunov (a silent and deadly military official), are both welcome and distinct additions. Rest assured there are a lot of characters to love, a ton of moves to be mastered, and plenty of intense match-ups to be staged.

A whole slew of modes offer multiple ways for you to duke it out. There is Quick Battle, which allows you to battle computer controlled opponents without the risk of ruining your winning percentage. Arcade Mode again allows you to battle the computer with the chance for promotion based on your success. The Story mode is where each character’s arbitrary reason for fighting is revealed. The overarching story entails power struggles within the powerful Mishima Zaibatsu gang and the commencement of the fifth King of the Iron Fist tournament. For every character, there are a few hand drawn stills as introductions and CG cut scenes conclusions. Fighting games aren’t usually known for their stories, and thankfully, Tekken doesn’t take itself too seriously. Some parts are cool and stylized, others are shamelessly crude and wacky, just enough to keep you entertained.

Other modes include Time Attack and Practice, but the heart of the game is the Dojo experience. Here you will hone your skills as you progress in rank through multiple schools of fighting. It actually works in improving your fighting skills, and leveling up in rank with each character can be addicting as the challenge level consistently elevates. You’ll unlock cash and more goodies to deck out your selected character the more you fight.

The Computer AI is programmed to simulate the feeling of playing random players at an arcade. They’ll display different names and behave differently to keep things feeling fresh, and for the most part it works. Opponents come in all different ranks and will provide an appropriate challenge determined by your skill.

As with most fighting games, Dark Resurrection lives and dies by its multiplayer. Locally you can battle any PSP owner, regardless of whether or not they own the game. Game sharing is extremely simple to use, though some options are only available if both players own the game. Playing against others is just as fun as it is in most Tekken games. The game runs smoothly and battles can come down to nailbitingly-tense finishes which will leave you begging for just one more fight, over and over again. Sadly, true online multiplayer did not make its way into this version. Instead you are given the option of downloading ghost data of players around the world from the internet. These ghosts will make their way into the Arcade and Dojo modes and will take on the fighting style of the player who uploaded them. It is a nice workaround but fails to deliver the same fun online multiplayer could have. Also you can’t shake the feeling that you are just fighting against slightly modified AI.

This game is a visual powerhouse. Characters and stages are rendered beautifully and without any slowdown. A small amount of jaggies are present, but not enough to detract from the “PS2 in the palm of your hand” feel of the visuals. Beautifully-crafted computer generated cut scenes employed to convey the story of each character fit the PSP screen exceptionally well and are among the most impressive I have ever seen. The animations are great, every action and subsequent reaction feels natural. Thanks to some crafty layer work, characters can seamlessly transition from one motion to another.

As far as the sound goes, this game passes muster. The sound effects when fighting are strong enough to relay a sense of feedback in the absence of vibration. The characters are fully voiced some in English, others in Japanese, but the option to fully voice them all in either on or the other is sadly missing . All the familiar sounds of the arcade come through the PSP speakers just as cleanly as you remember them. The soundtrack features plenty of electric-fused rock tunes, a staple of the franchise. The playlist does energize the fighting, but I hoped there would be more instrumental tracks available. Bottom line: this game does sound really good.

The developers did a good job in adding a ton of value into this package. With so many modes and characters available from the get go this game should keep your attention for a minimum of 20 hours. Other bonuses include downloadable rankings and wallpapers from the web, and minigames such as Tekken bowling, which is just as fun as any fully featured bowling game could hope to be.

Tekken: Dark Resurrection on the PSP is one hell of a game. If you aren’t dazzled by the technical prowess, you will be by the engrossing fighting mechanics and addicting local multiplayer. If you are a long time fan of the series, this is a must-own. If you're new to the Tekken arena, this is a great way to jump in. It is a shame that online multiplayer was not included, because constantly battling against the computer can get quite tiring. Despite this one major gripe, this is the closest you will ever get to carrying an arcade cabinet in your pocket, and in the end you might even have enough fun to forget about Tekken Advance completely.