Cult of the Lamb (NS)

Cult of the Lamb (NS)

Animal crossing... to the other side.

Whatever methodology Devolver Digital is using to choose the games it distributes, it's working. The Texas-based publisher has an uncanny knack for locating some truly interesting, unusual games and bringing them to market. This is certainly true for Cult of the Lamb, which represents an outside-the-box merger of construction and management simulation with rogue-like dungeon-crawling, all wrapped up in a darkly humorous setting, starring a cartoon sheep. Without a doubt, it's one of the more original games of 2022. But is it among the best?

Cult of the Lamb begins with a lamb literally being led to slaughter. The four Bishops of the Old Faith, and the cultists who worship them, demand a sacrifice after all. Then, just as the executioner's blade comes into contact with the sacrificial lamb, the anthropomorphic animal appears in another plane. There, in chains, is The One Who Waits, the fifth, exiled Bishop now sealed away from the world. The One Who Waits strikes a deal with the lamb: the fallen bishop will revive the lamb and bestow upon it his powerful Red Crown, and in return the lamb will create a cult and slay the four bishops in his name. 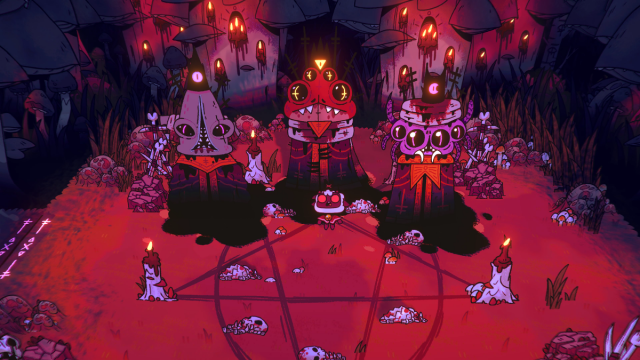 This all might sound a bit sinister — and indeed it is — but developer Massive Monster rides a line between twisted and comical, resulting in a game that's never overwhelmingly dark. It helps a lot that the studio leaned into what The Binding of Isaac creator Edmund McMillen calls "cute-gross". While the game features lots of gore, death, and macabre themes, it's softened and subverted by the protagonist — a cute, cuddly lamb — and its legion of followers, made up of adorable animated animals. Indeed, the art direction in Cult of the Lamb, alternately morbid and cartoonish, makes what could have been a nihilistic nightmare into something much more approachable and fun.

The artistic assets in Massive Monster's latest title aren't the only things that oscillate between two dissimilar parts. The gameplay in Cult of the Lamb does the exact same thing. It's one part construction and management simulation and one part rogue-like action game. As the leader of a new cult, you'll have to indoctrinate your followers, provide for them, and sometimes punish them. At the same time, you need to fulfil your promise to The One Who Waits by entering the dark dungeons of The Four Bishops, fighting their minions, destroying the charms that protect their temples, and ultimately killing them. Just as Massive Monster made its creepy world and winsome production design work together in harmony, the studio succeeds in merging these two disparate gameplay loops. The end result is a game greater than the sum of its parts. That said, some parts perform better than others. 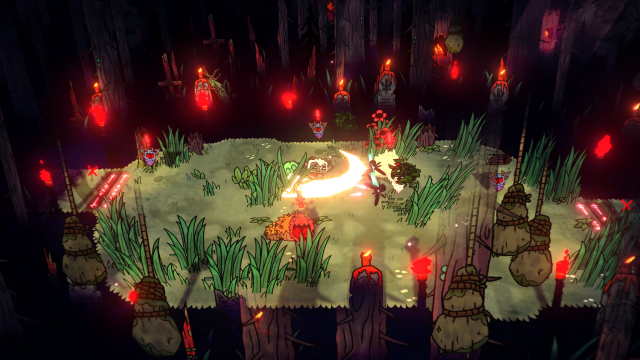 Let's start with the rogue-like piece. Outside the hallowed grounds of your cult are entrances to four distinct biomes, each ruled by one of the four Bishops. In order to face a Bishop, you must complete four successful "campaigns" through their biome, fighting gruesome monsters and roaming through randomly-generated rooms along the way. Everything takes place in a top-down, isometric perspective, in real time across several interconnected rooms and chambers. Some rooms are populated only with monsters, others with NPCs who grant perk-giving Tarot Cards or health refills, others with treasure chests, etc.

At certain intervals you'll exit a room and find yourself able to take one of several branching paths. Will you choose a path with foraging locations to fortify your cult, or a path with more combat encounters, hoping to get loot, Tarot Cards, and weapon upgrades? If you happen to die during your campaign/run, you'll lose your progress (and a fair share of the items you accumulated) and your followers won't be very happy.

This action component of Cult of the Lamb is a lot of fun. The randomness of perks, prizes, and punishments keeps things dynamic, and the persistent threat of failure keeps you on your toes — or hooves more accurately. That action itself is solid too. At the beginning of each campaign, you'll receive a random melee weapon plus a "Curse", a spell powered by "Fervor" dropped by enemies and found in chests. Some weapons will inflict poison damage or randomly siphon health from monsters, and some Curses will freeze cultists in place or summon vengeful ghosts to attack your enemies.

Whatever weapons and spells you end up using, there's a satisfying crunchiness to the fighting in the lairs of the Bishops. If there's one flaw to the action phase of Cult of the Lamb, it's diversity, or the lack thereof. While there are dozens of weapons, curses, enemies, and room layouts, there is a limit to how creative you can be in combat. More classes, builds, and fighting styles would be welcome here.

The roguish dungeon-crawling in Cult of the Lamb is enjoyable, no doubt, but it pales in comparison to the simulation piece. This is where the game proves its greatness. As a cult leader, you are responsible for many things: the health and well-being of your disciples, a reliable stream of food and crafting resources, and, of course, the overall faith that the cult has in you. As a result, you have many different tools and interfaces at your disposal to maintain a strong, healthy, devoted cult.

One of the most important is the Shrine, where cultists pray and deposit "Devotion". Once you collect enough, you'll achieve divine inspiration, which you can spend to unlock a new fixture or facility — a Healing Bay, for example, to tend to ill followers, or a Demonic Summoning Circle that allows you to take followers with you into battle. Another essential interface is your Temple, where you can deliver daily sermons to raise the Faith of your cult or perform rituals. These rituals can be as cruel or as kind as you please. You might sacrifice a disciple to a tentacled eldritch being, or distribute your accumulated funds among your followers. There is an amazing variety of decisions to make and priorities to set to make the cult your own. 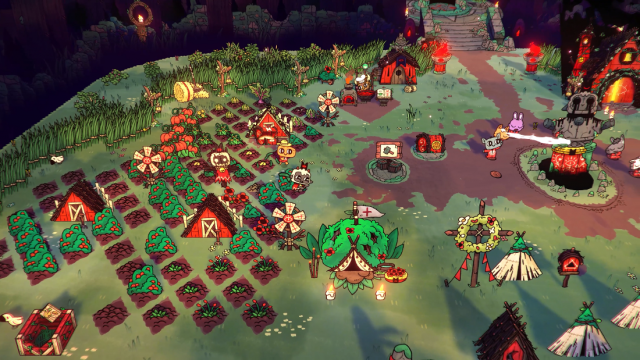 There's also a surprisingly tender part of all this simulation gameplay. Now, don't go in expecting the cozy friendship-building of Animal Crossing: New Horizons, but do expect to forge some meaningful relationships with a select few followers. Rescued and converted cultists will stay with you for years of their lives. They'll pay tribute to you, honor you, dance with you, confess to you, and, in some instances, even marry you. When they reach old age, they will walk slowly around the grounds of the cult, dressed in white robes and leaning on canes — no longer able to chop wood, mine ore, or pray, but at peace with all they accomplished in your name. When they die, you can bury them and even perform a funeral to send their spirits into the beyond. There's something weirdly wholesome about Cult of the Lamb, amid its darker moments.

While management simulation and rogue-like action are the two biggest chunks of Cult of the Lamb, they're technically not the only ones. Massive Monster wisely added some diversions to its twisted world, all accessible from the world map. When you need a break from your cult, you can travel to the shoreline to participate in a fishing mini-game, or to the Lonely Shack for a friendly match of Knucklebones, an amusing dice game. There are several other spots on top of these, each with quest-giving NPCs. 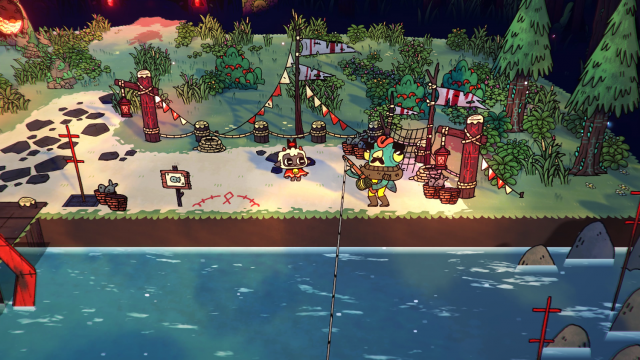 When these extracurricular activities combine with dungeon-diving and cult management, the result is a rather lengthy experience. I finished the game at around 22 hours, at normal difficulty, with the great majority of optional side content completed (there are a total of four different difficulty settings — easy, medium (developer recommended), hard, and extra hard). While there is plenty to sink your teeth into in the main game, there isn't a whole lot to do post game. After defeating all the big bosses, you're deposited back in your cult, at which point cult maintenance is the name of the game. Massive Monster has promised two substantial, free updates that will add new features and content at a later date, so rogue-like fans who crave substantial post-game material will have to stay tuned.

While the 20+ hours I spent with Cult of the Lamb were mostly delightful, they were regrettably not faultless from a performance perspective. During my time in the lands of the Old Faith, I encountered a few bugs and even a couple of soft locks. A few examples: a dissenting cultist I had jailed appeared multiple times in another area of the cult, without the pillory but still in his imprisoned animation; a mini-boss disappeared entirely, apart from its shadow on the ground and attack indicator; several deceased followers in graves disappeared overnight (grave-robbers would absolutely make sense in this title, but it wasn't that); and twice in the fourth dungeon I couldn't proceed after freeing a trapped follower. There are also a few frame rate hiccups on Switch, although nothing at all game-breaking. Since the launch of Cult of the Lamb last month, Massive Monster has deployed several patches and fixes to improve the game, but clearly some issues remain. 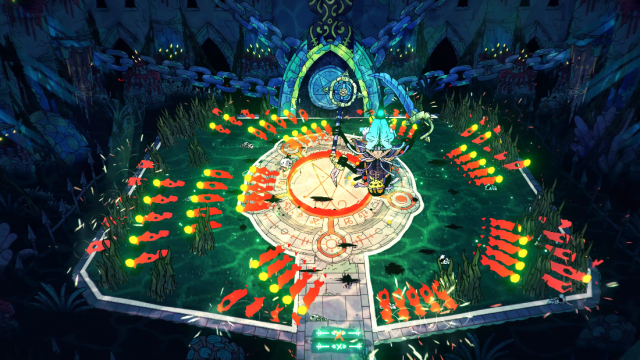 Despite some graphical glitches, the overall artistic landscape of Cult of the Lamb is outstanding. The hand-crafted models, backgrounds, and assets are full of personality and detail, and the entire production has a charming sort of pop-up book aesthetic. The OST, written and produced by River Boy, is alternately soothing and heart-pounding, and always atmospheric. "Start a Cult", which plays at your home base, is so catchy that you might never want to leave.

It turns out Cult of the Lamb is one of the more original games of 2022 and one of the better games of the year to boot. Its mixture of fast-paced rogue-like action and deliberate cult management works wonders, delivering crunchy, high-stakes combat and rewarding, open-ended simulation gameplay. The fighting phase could be more nuanced and performance isn't yet up to snuff — at least on Switch — but even so it's tough to put down. Once again, publisher Devolver Digital chose wisely.

This review is based on a digital copy of Cult of the Lamb for the NS, provided by the publisher.