You should be Russian out to play with these Dogs.

In my last seven years of reviewing Vita games I’ve played some truly unique gaming concepts. I’ve invaded college dorm rooms as inquisitive aliens, checked passports at the border of a Soviet-inspired state, rolled up giant balls of stuff as the Prince of the Cosmos, and driven a constantly rotating limousine through what seemed like a bad fever dream. So when a new release centered around dogs fighting for scraps of food on the Russian subway landed, I had to check it out – and I’m pleased to report that Russian Subway Dogs is more than just an awesome concept, it’s also a fantastic gaming experience. 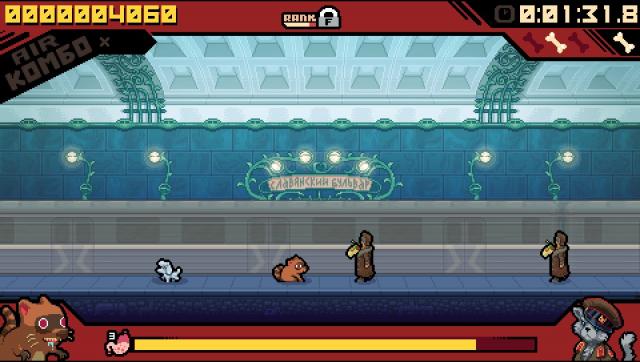 Tokyo Jungle this is not – you won’t be slowly planning your survival around the city, instead you'll be making your way from station to station and completing short arcade-inspired levels. The basic gameplay involves moving from left to right along the screen, getting behind travellers who are exiting subway carriages, and barking at them to frighten them into flinging whatever they’re carrying into the air. If this is food, you’ll have to quickly jump up to grab it (most items quickly disappear once they land), replenishing your hunger meter. You need to keep your stomach full enough until the next train arrives and you can continue to the following station.

As you might imagine, things don’t remain this simplistic for very long. Different types of food start to appear; shawarma is the standard, but some commuters carry fish or uncooked meats that are inedible as they come. As a result, you’ll also need to find people carrying bottles of vodka, which explode upon impact with the ground and cook the food for you, which is a fun little idea that I really liked. You’ll eventually come across items like hot sauce (gives you fire breath so that you can cook the food), coffee (slows down time, allowing you to move at lightning pace), and piles of snow (freezes food and turn it into a deadly weapon). Russian Subway Dogs constantly introduces new ideas and is all the better for this. 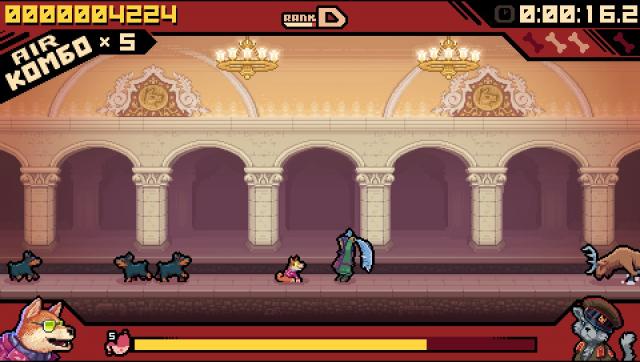 You're not the only animal fighting for sustenance on the subway and a variety of enemies will get in your way. Dobermans are slow moving dogs that only grab objects that land on the floor, while poodles pose a real challenge as they jump to steal the scraps you're going for, making them a pain in the backside. You’ll even come across elk (they charge from one end of the screen to the other), bears (these hit you if you get close), and pigeons (they dive bomb for scraps), and learning how to deal with each of these is a puzzle you’ll slowly work out. You can generally stun them with your bark, but mostly you’ll be relying on incinerating them with vodka explosions or turning them on each other with a bit of skill (for example, getting a bear to strike the poodles).

While Russian Subway Dogs is all about survival, you'll also need to get high scores in each station to progress. Food awards points, as does taking down rival animals, but you’re encouraged to get big combos to really rack up your score. You can do this in a number of ways, but the main one is juggling things in the air; barking as something is falling towards you will cause it to bounce upwards and add a multiplier, then finally letting it hit something (vodka) will give you more points than if you’d just left it. You can also get aerial combos by eating all of your food in the air, rather than letting it hit the ground, but the multiplier is lost as soon as something touches the floor, which makes going for aerial combos unforgiving but pleasantly challenging. 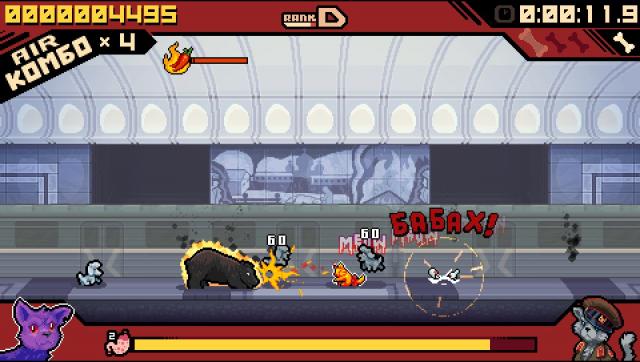 When this all works well, you’ll get into a zen like flow where you’re barking, grabbing food, getting points, and making plenty of progress. These times are when Russian Subway Dogs is at its absolute best. Equally, the screen can just devolve into pandemonium and it can be a little difficult to follow what’s happening – but it's a fun kind of mayhem that I really enjoyed playing through. Each of the levels in the campaign requires you to reach a certain score before the train arrives, and you’ll also need to collect bones (awarded for completing missions for Proletaricat, your Ushanka-wearing feline guide) to unlock new levels. Proletaricat's missions involve doing ridiculous things like eating a vegetarian-only diet, or feeding up a bear before cooking it, or making a pigeon dive bomb into a fire.

If some of those activities sound a little mean-spirited, that’s because they’re encouraged by a trio of kittens who talk to you between levels and highlight the completely bonkers sense of humour on display. Russian Subway Dogs is a really funny game that had me laughing a lot (seeing the kittens murderously chant “feed an elk to an elk!” was hilarious). It’s also surprisingly well committed to its Russian themes – the music is all traditional-sounding, the menus feature a distinctly Soviet design, and there’s plenty of attention to detail, which I loved. Graphically it's definitely a modest offering, but some of the backgrounds a beautifully drawn, and I was impressed that the game as a whole ran incredibly smoothly on Vita. 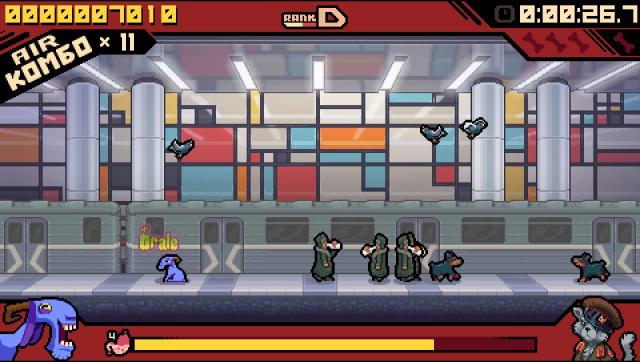 There’s a huge array of guest playable characters too, many of which are from other indie games, and they're well implemented. There were quite a few characters I wasn’t familiar with, but I did recognise the goat from Guacamelee! and the Shiba Inu from VA-11 HALL-A, as well as the “everything is fine” meme dog. They all have unique animations and make different noises (cats mew, the red panda squeaks, a raccoon goes “rawr”), making them the perfect feather in the top of an already impressive presentational cap (my only complaint is that there doesn’t seem to be an unlockable fox, which everyone knows is the best animal). I'd even be tempted to check out some of the titles that these guest characters are originally from, so this is one bit of cross-promotion that worked.

Russian Subway Dogs' main mode is campaign, which gives you a long string of levels that last about 1-2 minutes each, but you'll be retrying them over and over enough times that it'll take at least 3-4 hours to finish them all. I like how the difficulty options work here - both easy and normal are exactly the same in terms of challenge, but you unlock subsequent levels faster in easy, meaning you can get to the end of the game more quickly. This allowed me to play the majority of Russian Subway Dogs in normal mode, before switching to easy once I hit a brick wall of gathering enough bones to unlock the final boss level.

Speaking of bosses - there are several boss fights scattered throughout the game and they make for nice little bonuses. They also introduce slightly different mechanics (barking to explode bombs and the like) and culminate in a final fight that is both rewarding and exciting. 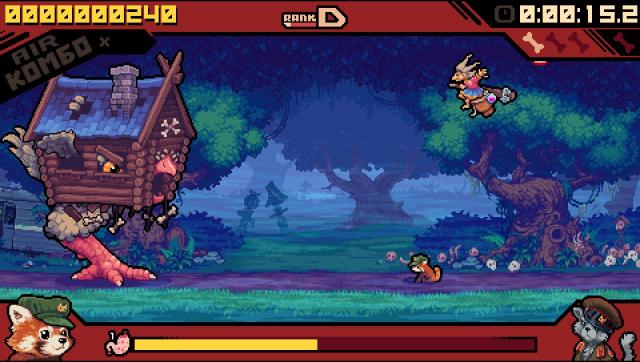 Once you're done with the campaign you can dip into endless mode, which is an excellent high score-chasing challenge that will likely keep me coming back for many months to come. It solidifies Russian Subway Dogs as the complete package and an absolutely fantastic final Vita game release, ensuring the console goes out in style.