Afflicted by the blight.

After an eternity of being stuck in the seemingly infinite purgatory that is Steam Early Access, Blightbound, the hacko slasho dungeon crawlero game published by Devolver Digital, has finally released. Developed by the relatively unknown Ronimo Games, Blightbound seeks to position itself as a cheaper alternative to fully-fledged dungeon crawlers like Diablo. But is it worth the $20 asking price? 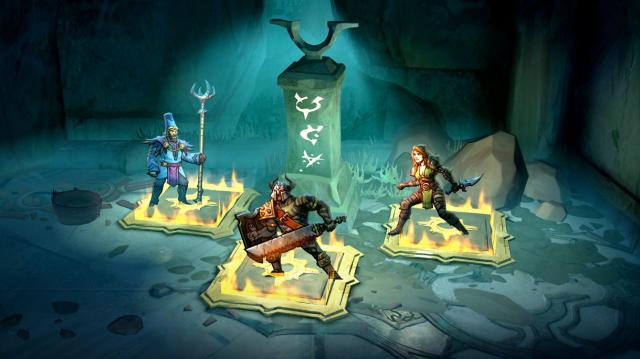 Blightbound’s story, such as it is, involves three characters venturing into an apocalyptic wasteland in the wake of an Earth shattering catastrophe to rescue stragglers. There’s some interesting lore to be found here and there, but it’s ultimately a bit muted by all three of the main protagonists being about as interesting as a bowl of plain oatmeal.

The moment to moment gameplay is... fine, I suppose. The gameplay takes place from a perspective halfway between side-scroller and top-down, in a way that’s not too dissimilar to some of the old Capcom beat-em-ups from the 90s. You play as one of the aforementioned three characters, teaming up with friends or computer controlled versions of the other two, progressing through a series of linearly designed levels that spawn in enemies to kill and the occasional puzzle to solve.

The various playable characters throughout the game are separated into either standard damage, tank, or healer archetypes. The tank distracts enemies, the damage character dishes out the pain, and both of them try to keep the very fragile mage from dying. For the most part, characters within the same archetype play pretty much identically, with one exception. Each character has a unique "ultimate ability" that works on a 'killdown', which can be used strategically to boost their attack power or effectiveness. All in all, this is about as standard as dungeon crawlers get, but there’s nothing inherently wrong with it. 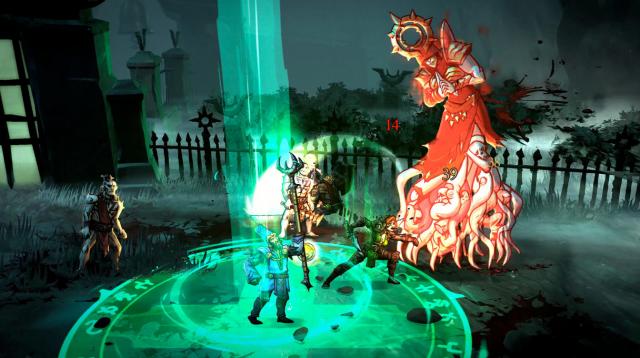 Relatively mundane core gameplay can be excused if the game provides an interesting way to build characters, but unfortunately Blightbound falls short here. Leveling up brings with it the option to unlock new skills for your characters, but the vast majority feel pretty underwhelming and many of the unlockable abilities are just variations on doing what you were already doing but more efficiently, rather than expanding your skillset or movelist in an interesting way to develop your playstyle.

One element with potential to be interesting was the inclusion of a sickness mechanic, wherein certain heroes who get used too much become afflicted with poison and need to rest for a few missions. This could have been intriguing, forcing players to make crucial choices about when to use their favorite characters, but unfortunately it loses much of its potential to engage because of how similarly the archetypes play. Your warrior character sick? No problem, just swap a virtually identical one in for him. I honestly forgot this mechanic existed when writing my initial write-up of the game because of how little it ultimately matters. 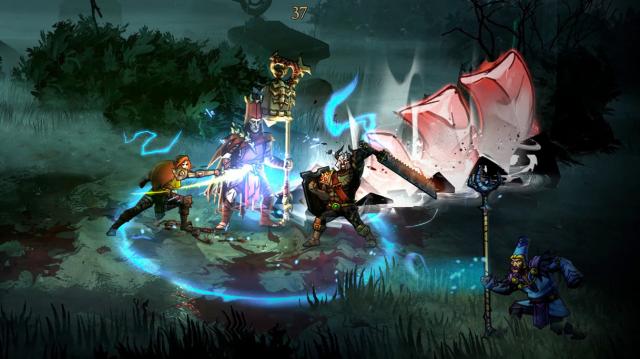 Blightbound’s real problems show up with its technical deficiencies, of which there are no shortage. Miserably programmed friendly AI? Check. Dubious hitboxes? Check. Game crashing? Check. Glitches? Check and checkmate. One of the more egregious glitches occurred when playing with friends, where one of my teammates became unable to level up after the corresponding menu disappeared. Quitting and even un-installing the game wouldn’t fix it, which unfortunately meant having to bank on the ever unreliable nature of the game’s friendly AI to make progress.

The aesthetic components of Blightbound are acceptable. The art style is pretty appealing, with a melancholy nature that fits the ruined nature of the world in the game’s lore well. Music and sound effects aren’t really notable to any degree, and again are predominantly just functional, rather than adding to the title or making attacking feel satisfying in any way. 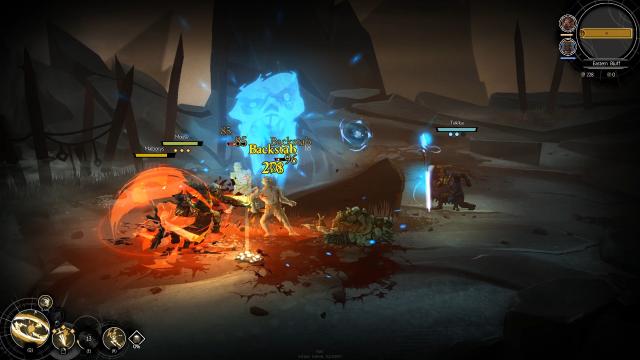 This all ultimately puts Blightbound in a precarious spot. Blightbound is a title without much of an identity to flaunt; it’s utterly devoid of anything that could make it stand out amidst the usual crowd of Steam dungeon crawlers, and it features numerous technical issues that hold over from its long stay in Early Access. That all makes Blightbound hard to recommend to anyone. So if you’re searching for a dungeon crawler with hack and slash mechanics, I can’t really think of a situation where Blightbound would be at the top of the recommendation list.

This review is based on a digital copy of Blightbound for the PC, provided by the publisher.