Ender Lilies: Quietus of the Knights lives at the intersection of Metroidvania Road and Soulslike Boulevard. It features the 2D action-platforming and backtracking exploration of games in the Metroid tradition, and the dangerous combat and grimdark setting typically associated with Dark Souls and its descendants. As a result, it will draw fans from both camps, and delight folk who adore both sub-genres in equal measure. That said, developers Live Wire, Adglobe Tokyo, and Adglobe Montreal Studio have made overtures to less experienced action-RPG players, so the hardest of hardcore Souls fans might wish for more punishing gameplay — as strange as that sounds.

Set in the ruined medieval kingdom of Land's End, Ender Lilies follows the adventures of the young priestess Lily, who wakes up from a deep sleep in the heart of a crumbling cathedral. At her side is a mysterious ghostly knight, who promises to protect her. Soon the duo are off into the decaying halls and monster-infested passageways of the cathedral. Lily, voiceless and afraid, cannot fight on her own, but the knightly apparition battles on her behalf. Once outside of the cathedral, in the open air of Land's End, the full expanse of the devastation is laid bare. A poisonous, ceaseless rain has polluted the kingdom, turning formerly happy subjects into blighted, undead abominations. 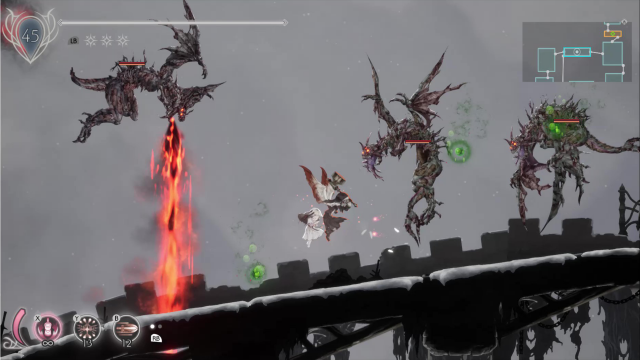 Many things about Ender Lilies are outstanding; storytelling and world-building are definitely among them. The scribes at Live Wire and Adglobe have crafted an utterly convincing and heartbreaking dark fantasy world, supported by a deep, detailed mythology. Importantly, the development team doesn't overwhelm players with all this lore upfront, but slow-drips the information via visual cues and dozens of left-behind letters, notes, and journal entries. You will be treated to a handful of cut scenes throughout the game, yes, but these are few and far between, rewards for toppling each main boss.

In order to collect all the forgotten notes and view every last cut scene, you'll have to send Lily and her spectral bodyguard back and forth across eight different biomes, fighting monstrosities small and large. In general, Ender Lilies unfolds like a typical Metroidvania: you'll fight, jump, dash, and swim across several branching areas, searching for documents, trinkets, and upgrades, all while fighting blighted creatures. At several junctures you'll run into an obstacle — a sheer cliff, a locked door, a pustule — and you'll be forced to explore elsewhere, at least until you find the ability that opens the way forward. 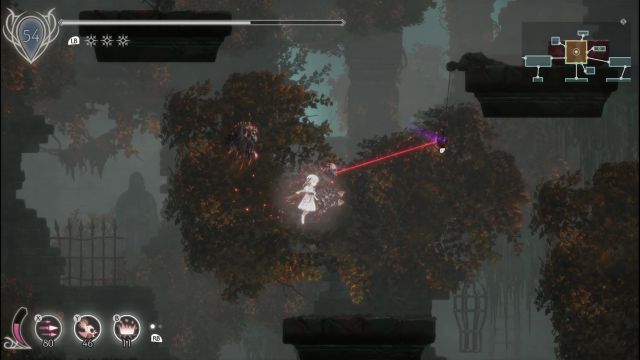 The joy of Ender Lilies — and Metroidvania titles in general — comes from this cycle of hitting a brick wall, following a detour to an upgrade or boss encounter, and then returning to the obstruction armed with new powers. Since Land's End is packed with secret rooms, hidden paths, and optional mini-boss battles, you'll find yourself completing this cycle often, particularly in the final hours when all the game's tools are unlocked. Thankfully, the in-game map highlights rooms that are explored completely, meaning you can focus your efforts in the areas with remaining loot.

While most of the biomes you'll explore in Ender Lilies are spectacular — both in terms of layout and aesthetic — one section stands out as something of a letdown: the game's final area. Here the air is filled with a poisonous smog that obscures enemies and continuously damages Lily, and some of the enemies do an obscene amount of damage. 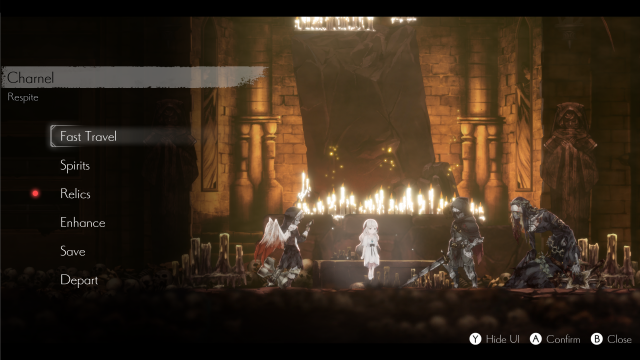 This final area is the exception to the rule, however. The majority of the biomes in Ender Lilies are enjoyable to traverse and explore. Indeed, traveling to and fro across Land's End is a mostly pain-free experience, thanks mainly to multiple fast travel nodes that double as save spots, or "respites" in the game's parlance. Yet this too comes with a caveat. While the fast travel network is certainly convenient, it removes the need for truly interconnected level design. This isn't a deal-breaker — fast travel points are pretty much industry standard — but it would be nice to discover more shortcuts between biomes, instead of shortcuts only within them.

The bigger issue with save points is that you can return to the most recently-visited respite at any time in the game via the pause menu. This is an undeniably user-friendly feature, but it makes things a little too easy. You lose nothing by teleporting away from danger. Moreover, you lose nothing by dying in the game, apart from the physical distance made from the last respite. You retain all items and experience upon death. It's here where the game could lean even more into the Soulslike formula and insist on greater punishment for failure. Does every video game need to embrace fully the Dark Souls blueprint? Absolutely not. But Ender Lilies is designed in such a way that its forgiving nature comes as a surprise. 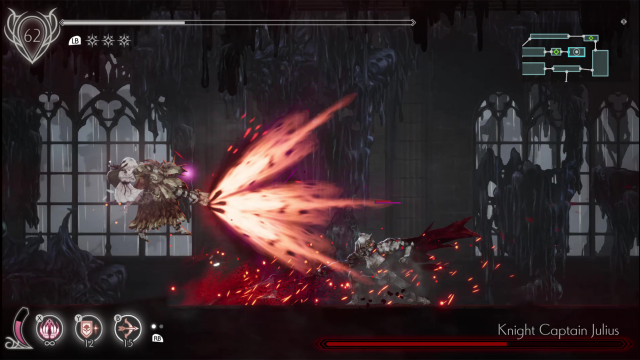 Perhaps the game's greatest surprise, though, is its superior combat, underpinned by a flexible and tactical Spirit system. As mentioned earlier, Lily herself cannot survive in combat with the blighted monsters that roam the land. Instead she deploys collected Spirits to do the dirty work. The Umbral Knight, your initial spectral companion, is the first of these Spirits, but not the last. As you march through Land's End, you'll encounter over 25 bosses and mini-bosses, each of which becomes an equippable Spirit after Lilly defeats and exorcises them. At a respite you map them to one of three buttons and then deploy them in combat, according to specific usage and cooldown rules. It's similar in many ways to the "folk" system in Folklore.

How you mix and match these Spirit companions is up to you. You can stick with the Umbral Knight as your main "weapon", and deliver a fast three-hit combo, or opt for Gerrod, the Elder Warrior, who attacks with a slow-moving but devastating club. You can embrace an aggressive melee build, arrange a more conservative projectile build, or design your fighting style around parries and counter-attacks. It's all incredibly versatile. Furthermore, you can upgrade your favorite Spirits with blight deposits found hidden around the kingdom and complement them with magical relics that boost HP, increase movement and dashing speed, reduce cooldown times, etc. 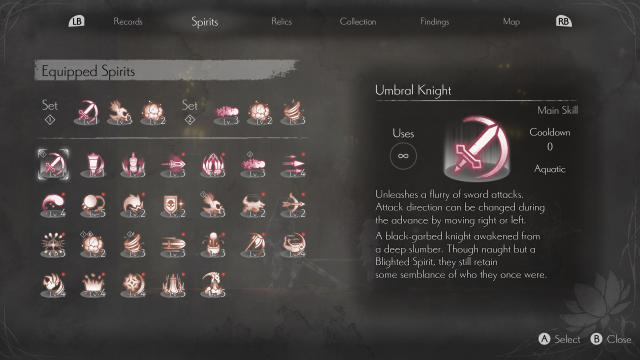 You'll need all the upgrades and relics you can get, because Land's End is a deadly place. Enemies hit hard and healing drafts are in short supply. There's an amazing tenseness to each battle, as if it could be your last — which, again, is diluted somewhat by the lack of punishment upon death. Still, it's great fun to study the enemy, identify its tells, and exploit its weaknesses. This is particularly true for the game's many boss battles, some of which require a good amount of trial and error.

Between this trial and error cycle and the sheer amount of real estate in Land's End, Ender Lilies will be with you for a while. You might "beat" the game in 10-12 hours, but if you want to find every last record, uncover all lost relics, exorcise every single blighted boss, and see the true ending, you'll need to invest close to 25 hours. This is one of the meatier Metroidvania games of the past few years. 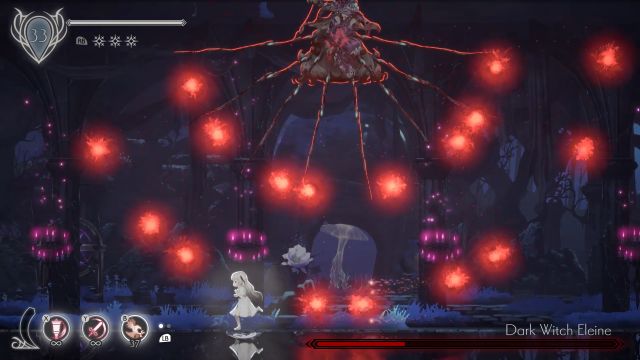 It's also one of the prettier ones. The hand-drawn art in Ender Lilies is simply gorgeous. Backgrounds are elaborate and multi-layered; models are detailed and beautifully-animated; and each biome has its own distinct visual identity.

The music's great too. Mili, a Japanese indie music group, has crafted a haunting score, heavy on piano and other classical instruments, that feeds into the melancholy vibe of the game. The best song of the lot might be "North", which accompanies you on your trip to the Twin Spires. Overall, this is one of the finest soundtracks of the year.

That's fitting, because Ender Lilies is one of the finest games of the year. Part Metroidvania and part Soulslike, it manages to deliver in all phases: story, world-building, mechanics, gameplay, value, art, and music. Its final area is tedious and its low-stakes approach to failure is a touch too lenient, but overall it delivers almost everything you'd want in a grimdark 2D action-adventure.

This review is based on a digital copy of Ender Lilies: Quietus of the Knights for the NS, provided by the publisher.