An arrr-fully rough pirate game that occasionally feels like a keelhauling to finish.

Considering the bounty one could score, ye'd think game industry cutthroats would be all over pirate games.  Living life as a scallywag with unchecked freedom seems like a recipe for success.  Donning a new captain's hat after several racers, developer 3DClouds (Race with Ryan, All-Star Fruit Racing) seems to agree.  Inspired by the notably good game Sid Meier's Pirates!, King of Seas fuses the isometric projection of old-school RPGs, procedural world generation, and traditional naval combat.  The result?  Inspiring as it may be to see a new pirate game, the panoply of design issues tempted me to abandon ship on several occasions.

Choosing between Marylou and Luky, you play an heir to The Kingdom of the Seven Seas.  After a short trip away from King’s Fortress, your father is slain in his sleep with a powerful voodoo spell.  The Royal Navy officially blames you for the assassination.  After being attacked and presumed dead, you're narrowly saved by one of the last known pirates charting these waters.  Now in league with pirates, Marylou/Luky must circumnavigate their way through this new life by discovering the real culprit and repairing their reputation. 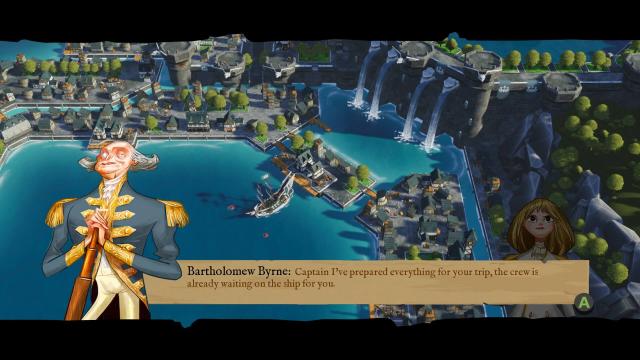 One could question how becoming a swashbuckling pirate will go over in saving your "treasonous" reputation with The Royal Navy; then again, troubling yourself with internal consistency isn't worthwhile given King's boilerplate narrative.  It's a simple set-up for pirating to become your character's new life.  Along the way to becoming a true pirate legend, you're greeted with some quirky personalities, occasionally fun humor, and easily-telegraphed twists.  Like the game design, the world-building is procedurally generated too.  Secondary and tertiary characters serve as little else beyond instructing you on an objective, the main antagonist has his moustache-twirling palaver loaded at the halfway mark, and there's a fitting climactic battle.  Utilizing a digestible formula isn't a problem by itself; it's when there's nothing to unearth beyond that that it starts getting stale.  A 'story-as-checklist' template somewhat undermines the adventurous pirate theme.

At least King's presentation gets more mileage by comparison.  That should be followed up by an important qualifier: this is a budgeted indie team handling a wide open world.  Technical aspects like texture quality, shaders, etc. clearly weren't a priority.  There's also no voice acting; instead, all dialogue is through traditional text blurbs.  At least there's some artistic flourish within the dialogue.  I like the Byzantine-era aesthetic to character proportions and how it and the stylized text appear etched out on old parchment.  Although dotted by a lot of formulaic settlements and islands to fill the world, I appreciated the more exotic locales.  The vestiges of an older era scattered across the map felt more engaging and made me consider the world's potential history.  These may be meager positives in the grand scheme, but at least they're something.

"Fair enough," you may say, "but not every game with procedural generation should be weighed like Hades."  If 3DClouds withheld some gold doubloons for story supplements in favor of gameplay & replayability then it's a good trade-off.  But that crown jewel is terribly tarnished.  To analogize how King falls so short: it's like a new sturdy ship fresh off the docks but there's already a mutiny on-board. 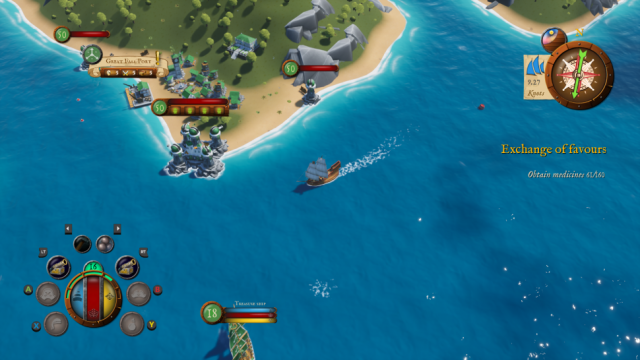 For a light-hearted ARPG, the naval combat is fundamentally sound in concept.  Although your starter ship is a sloop, there are four other options to select when you get the appropriate funds: flute, brig, frigate, and galleon.  Each of these vary in size, amount of cannons, speed, and inventory capacity.  Is the blunt force of a galleon's 30 cannons more your style or the brig's speed and sharper turn radius?  Learning the ropes of acceleration and turning play their roles in navigating the seas.

Cannon combat is complemented by four special abilities mapped to the four face buttons: boatswain, specialist, first mate, and special weapon.  The first three can be equipped to any ship, the special weapon category is class-specific.  It's a decent way to make smaller ships still seem like sexy options for combat.  The variety of offensive & defensive special abilities is quite modest as well, although not all are equally useful.  Voodoo magic such as summoning a whirlpool with area-of-effect damage or a targeted fireball are just as critical to understand as cannonball timing and tactical positioning.  Overall, 3DClouds made effective use of the controller for this type of top-down perspective. 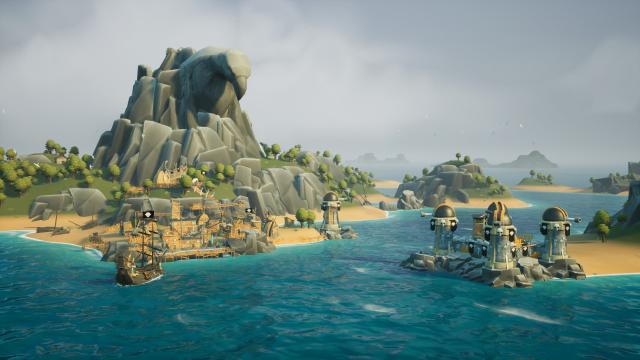 Now for my fundamental misgivings.

As someone who completed on Captain Difficulty (highest one given on default), I can't believe how unbalanced stats currently are against you.  The epic broadside combat depicted on the game's storefront page isn't really feasible here.  Your best tactics are maneuvering to never get directly hit.  Encircling a large rock, waiting for the opportune time to fire, then quickly getting back to cover was my most reliable move before I could secure abilities.  One big mistake while doing this could cost you three-quarters of your hull's health while you're laboriously pecking away at a cannon-sponge by comparison.

Before demanding I just 'get good' at isometric Pirate Souls, the desultory objective structure plays a much greater part than me lacking the right skills.  So you're starting as a sloop and working your way forward.  Fair enough.  Considering how the economy works at the start, there's a grind to securing 30,000 Gold for a flute (sloop with more storage space).  Shortly after this main quest, you're expected to take on a brig, frigate, and galleon boss to progress forward.  Do the math: 3 cannons on a side against 5, 12, and 15 respectively.  Should the fusillade of quarter-ton balls be a critical hit – which does happen often - it could be a one-hit KO.  And since all other ships are level-scaled, ship upgrades only assist you in keeping pace with these enemies.  I was around 40% completion when these frustrations were starting to foment; I legitimately thought this part was broken unless you grinded for even more gold for a better ship.  Knowing I couldn't alter the difficulty setting and would then have to start all over again, I pressed on and somehow lucked out.

Coupled with this structure is laggard pacing.  Go back to the flute example: imagine struggling to pay for upgrades, a new ship, etc. for a modest chunk of the campaign.  I’ve seen no more than 35k gold at this point.  After doing a critical favor for a governess, I'm told that a carpenter owes her big favors and will sneak me into the capital.  The one hang-up: I need 100k gold on hand.  The main quest comes to a screeching halt just so I can accomplish repetitive side quests that are either a bounty or delivery.  The funny thing is the carpenter doesn't even take the gold from you.  So, it's just to prove your tenacity or something?  The real, unstated reason behind this move is for another artificial barrier later with a level threshold to continue, for which I was still behind anyways. 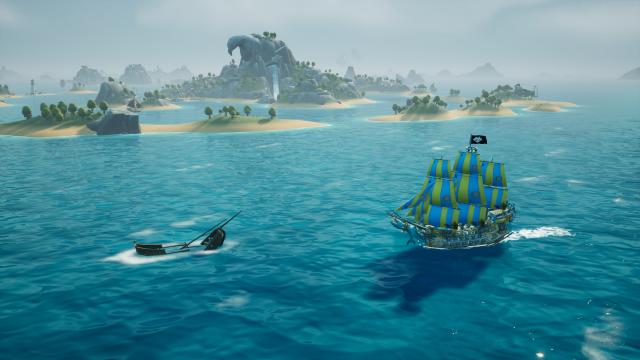 These annoying elements are amplified by lackluster exploration of a wide ocean.  King's map has no good reason to be 13x13 tiles with all of this back-tracking.  Granted, there are a few nice archeological spots to observe, cargo to discover on your travels, and a cartographer on each tile to purchase one tile's topographical layout.  These are only nice trinkets to the uneventful sea-faring though.  Hell, there's not even an option for fast travel from the cartographers.  If not direct fast travel, why not add a mini-challenge where you need to reveal a big portion of the map to discover a popular trade route?  There's no mechanical variety outside of combat, going to a place, or temporarily stopping and hitting the 'A' button to perform actions like fishing.  Yes, fishing amounts to you stopping your ship and hitting a face button.

There are a plethora of smaller issues mixed in with larger ones too.  Beyond previous ones stated, there's so much room for other quality-of-life (QoL) improvements like a 'Sell All/Buy All' button in the marketplace.  It's also crashed on several occasions for the most innocuous of actions.   On top of that, there's a helping of audio issues, such as strange background noises and looping soundtrack beats.  Considering how similar most sound, I'm surprised to learn Andrea De Nittis' OST contains over 20 unique tracks.  Finally, one of the worst additions is a randomly-appearing monster tentacle that can strike at any time.  Sure, it's avoidable if you're quick; however, there's little hope if it appears during battle.  Then you're out roughly one-third of your ship's health. 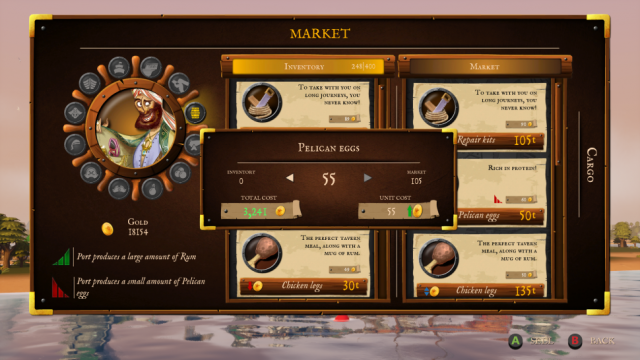 This repetition about King's multifarious flaws is less about savaging the game but rather emphasizing the what-could-have-been.  Because when you're finally able to afford a brig or a frigate (galleon is too slow for me), a mysterious threshold is crossed and a better – albeit unpolished – version of its better potential is discovered.  There's room to appreciate smaller details, like satisfying turning maneuvers or perfectly timing a short invincibility power, after the annoying clutter goes away.  I don't think it was worth the journey to get there, but it was a modest consolation prize nonetheless.

If you're exclusively about dollar-per-hour value then King will be an inoffensive ask.  Thanks to those previously mentioned pacing issues, you're looking at 10-15 hours (or more) on one difficulty setting.  Although there's no New Game+ mode upon completion, the two harder difficulties do become unlocked.  But the thing that hits harder for its $25 price point is how incomplete it feels.  I do my best to avoid 'Early Access' labels that are usually tossed at launch GaaS titles, but I think this title fits the bill.  Beyond some recurring tech issues, I can't comprehend how a 1.0 version would have basic QoL additions missing at launch.  You're paying for the beta version of a team's vision. 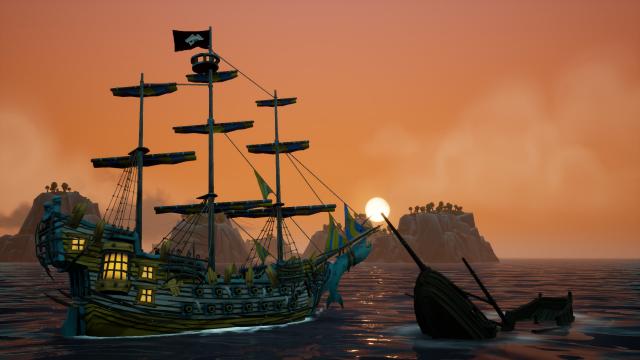 King of Seas is akin to a reputably strong pirate now maligned with scurvy.  You can easily see how this pirate game could be a great success, but so many deleterious design issues turn it into something cursed.  Perhaps something better could come of it through updates, but given 3DClouds' admittedly busy development schedule one has to wonder when that'll come to fruition – if ever.  Until then, there's better booty to be found elsewhere.

This review is based on a digital copy of King of Seas for the XOne, provided by the publisher.