Gal*Gun Returns requires some explanation. It's a remastered version of a rail shooter/dating sim hybrid that originally debuted in Japan in 2011 on Xbox 360 — of all places — and then landed on PS3 the following year. This remastered version, unique to PC and Switch and designed to celebrate the franchise's tenth anniversary, includes all the previously-released DLC, some new story scenes, and cleaner graphics. As a remaster, it's acceptable, even if it fails to capitalize on some of the unique features of the Switch. As a game, however, it struggles to remain relevant, in part due to its uncomfortable voyeuristic gameplay and in part due to tired, repetitive light-gun-style shooting.

The story of Gal*Gun Returns follows Tenzou Motesugi, an average high school boy who doesn't have much luck on the dating scene. One day, an angel-in-training, Patako, shoots her angelic blaster at Tenzou, in order to make him attractive to the opposite sex (you see, all seniors at Angel Academy must give an assigned human a "day in the sun" in order to graduate). The problem: instead of one angelic arrow, more than enough to make any human irresistible, Patako fires sixteen. As a result, Tenzou becomes Way Too Freakin' Popular (WTFP). Every girl at his academy (and some teachers) is drawn to him. He must fend them off by — wait for it — firing Pheromone Shots at their erogenous zones, and then hopefully win the heart of one of four special ladies in his life. 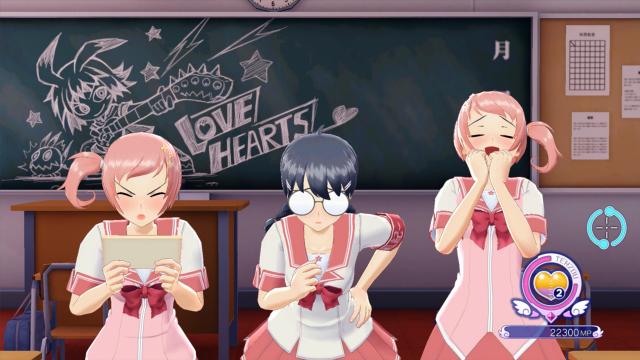 This bonkers storyline is one of the better parts of Gal*Gun Returns. While the gameplay elements it triggers are problematic — more on that later — the situations it inspires are silly, subversive, and at times very funny. The verbal exchanges between Tenzou and Patako are especially good, and come to life thanks to some excellent localization work from the Inti Creates team.

The gameplay, conversely, is rather poor. Gal*Gun Returns is a rail shooter that plays like Time Crisis or The House of the Dead. You'll roam through several generic high school settings in a first-person perspective, aiming a reticle over swarming schoolgirls and targeting their sensitive spots to give them euphoria. That's basically it. The action feels dated and shallow.

Now, there are some twists. Each girl has a specific weak spot where a direct Pheromone Shot will trigger instant euphoria. So, if you're replaying a campaign seeking a high score, you can try to leverage these weaknesses. Then there's Doki Doki Mode. By giving girls euphoria, you'll fill your Heart Gauge. When it reaches 1, you can activate Doki Doki, which pulls a selected girl into a separate screen. Here you can zoom in on the girl's erogenous areas in 360 degrees and give them euphoria. 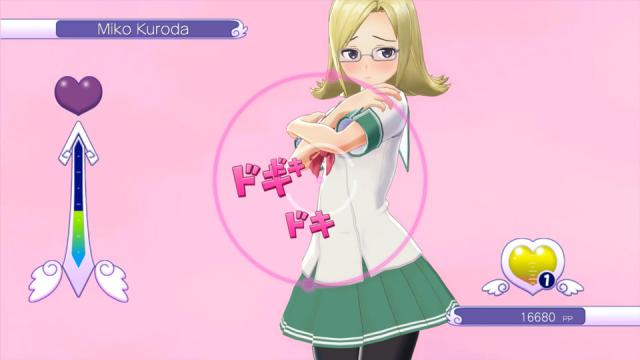 Doki Doki Mode is problematic for a couple of reasons. One, it's tedious and undemanding. You're just zooming in and shooting more body parts. Two, it makes the game uncomfortably voyeuristic. Sure, all of Gal*Gun Returns is designed with fan service in mind, but Doki Doki Mode feels very intimate and intrusive. It's made worse by the fact that some of Tenzuo's would-be girlfriends are young-looking underclassmen.

Gal*Gun Returns is at its best when it focuses on mini-games unique to each of Tenzuo's four crushes: Kaname, Akira, Kaoruko, and Aoi. There's poolside training with Akira, where you must shoot iron balls bearing down on you; song writing with Aoi, where you need to shoot the lyrics you think are correct; and several more. The best of the lot arrives in Kaoruko's campaign, where Tenzuo needs to pose nude for an art class and then shoot on-screen sheep to avoid falling asleep — just the kind of screwy scenario that makes the game memorable, if nothing else. 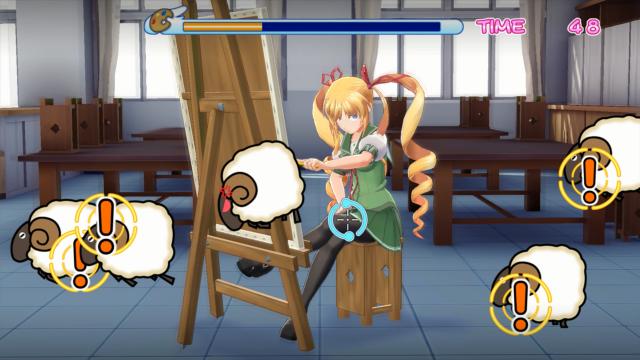 There's a decent amount of content in Gal*Gun Returns, although not all of it is worthwhile. The heart of the game is Story Mode, which can be played in one of four routes — one for each crush. Furthermore, each of these routes has multiple endings, including a "true" ending. While the different routes are welcome, they recycle some of the same environments and situations.

After you beat all four routes, you'll unlock Doki Doki Carnival, a campaign that features Tenzuo, Patoko, and a new angelic trainee Ekoro. This mode is essentially a multi-person Doki Doki Mode, and thus suffers from the same problems previously mentioned.

Other options include Score Attack, where you play through the unique sections of each main route, or try individual sections for high scores; Collection, where you can view any earned titles and portraits of all the game's girls; Dressing Room, where you have the option to change clothing and accessories for the girls; and Gallery, where you can view and unlock concept art and illustrations. Gal*Gun Returns has some problems, but replay value is not one of them. 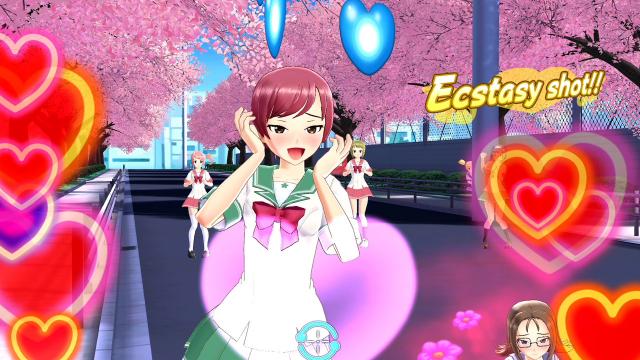 In terms of remastered visuals, Gal*Gun Returns looks superior to its earlier 2012 PS3 build, with cleaner, smoother, brighter graphics. The game still suffers from some bland, generic art direction, but it looks better than ever before. Sadly, the remaster doesn't include any Switch-specific control schemes: no gyro aiming or touch controls. These are frustrating omissions, since a light gun-style experience on Switch seems to demand these features. Who knows; perhaps gyro aiming would have made the rote shooting mechanics more rewarding.

Last but not least, the development team deserves credit for one small but ingenious feature: the "Mom Walked In" panic button. By pressing the minus button during the action, the game will immediately switch to an inoffensive side-scrolling 8-bit version of itself, in case someone walks in while you're playing. It's a brilliant little bit of self-awareness from the folks at Inti Creates.

Self-awareness is definitely part of the package in Gal*Gun Returns. It's a game completely cognizant of its preposterous premise and sexualized gameplay. Yet, fan service can only carry a game so far. It still needs to be interesting, engaging, and challenging. Regrettably, Gal*Gun Returns struggles to fulfill that mandate, due to tired light gun shooting mechanics, tedious and uncomfortable Doki Doki sessions, and repetitive scenarios.

This review is based on a digital copy of Gal*Gun Returns for the NS, provided by the publisher.