When the Past was Around (XOne)

When the Past was Around (XOne)

Whether due to its miserly length or disjointed puzzles, Mojiken's exploration of loss is already distant in my mental rearview mirror.

Note: This review is based on the Xbox One version of the game, but played on an Xbox Series X.

Learning to manage grief isn’t comfortable subject matter to explore.  Depending on the situation we may openly weep, reflexively lash out in anger, or burrow away into a dark corner – barricaded in such a way that ensures no sunlight sneaks in.  Indonesian indie developer Mojiken utilizes the ‘puzzle-escape’ adventure subgenre as a tool to pull us away from the abyss of depression.  On its face, such artistic intention deserves credit; it's a cohesive way of marrying themes with game systems that do more than make players walk around.  Which leaves an important question: does When the Past was Around effectively put this potential to good use?

Sporting no dialogue or voice acting, Past's storytelling techniques rely solely on thought bubbles and terse hand-drawn animations to convey its message.  The grander narrative is easy to infer: the protagonist, Eda, is dealing with the loss of her love, known as “The Owl.”  This surreal world with memories of Owl (human body & head of an owl) takes her back to warmer times with him.  As you successfully complete puzzles more of her past is revealed, compounding the tragedy of her present situation. 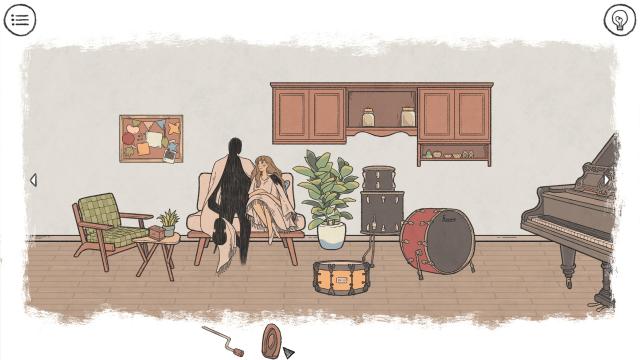 Were I to assess solely on intention, I'd find nary a fault with it.  The execution does leave a lot to be desired, however.  Even if my previous paragraph seems a bit too "spoiler-y", it's partly due to how expected this type of saccharine drama can get.  And with its ephemeral runtime, you're reliant on the most plain story templates to connect with these characters.  Sure, they still have endearing qualities, but their development barely scratches the surface.

Given my habit to scrutinize bloatedness in modern games' stories, Past is a good countervailing specimen to that trend.  There's an earnestness to Eda and Owl meeting for the first time, exchanging pleasantries, and finding a passion in music.  Playing the role of archeologist to this short love story can have its moments.  The foundation begins cracking when the signposting for the next emotional beat becomes more and more obvious.  The melancholic music with the occurring scene feels more and more calculated as a result.  Absent any kind of narration, you're left with a skeleton of a post-romance tale.

Another aspect that interrupts my connection is the point-n-click gameplay.  As stated earlier, I think Mojiken is onto something here: rather than clicking to walk around an environ, you interact from a distance just like in a hidden object game.  It works thematically too.  What better way to communicate a distant, cocooned protagonist rummaging through past memories than making your tasks feel distant too?  The problem is they feel more like rudimentary hurdles with little context beyond that. 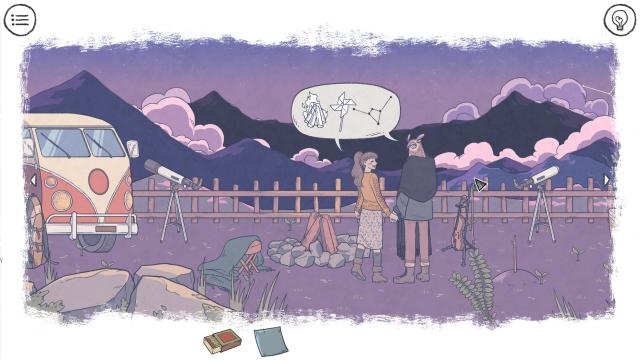 Given that there's no narration, sometimes a character's thought bubble relays integral data.  Those tasks, such as preparing tea for Eda and Owl, make you feel more like a goddamn maid than an engaged player.  As the game progresses the puzzles do increase in complexity, occasionally requiring you to return to previous areas.  Despite being the parts with some difficulty, a spare few rely on obnoxious solutions and end up artificially disrupting the game's flow.  This was further compounded by rare moments of having to restart the game when a bugged puzzle wouldn't acknowledge that I had all the necessary items.

In short, the only satisfying puzzles are on the margins for me.  The solutions often go towards the two extremes: instantly knowing the answer while waiting for the game to catch up or purposefully obtuse because it’s so in love with its own idea.  More often it’s the former.  Even small details like jamming down either bumper button (or pushing the cursor to the edge) and slowly scanning each part of a room made me loathe retracing my steps during the more expansive brainteasers.

Despite all the posted issues, there's still something to greatly admire with Past's presentation.  Brigitta Rena's hand-drawn art has this slightly rough yet beautiful style that's filled with so much character.  Even qualities as odd as an owl-human hybrid have this naturalist tinge so as to not feel disjointed from the rest of the world.  Whether in gameplay or brief cut scenes, the gentle style encouraged me to consider which artists were Rena’s biggest inspirations.  Though more limited and repetitive, sound design and OST are satisfactory.  The game's leitmotif, supplemented by clicking on thought bubbles during scripted moments, is a pleasant one but overuse dampens its edge by the end. 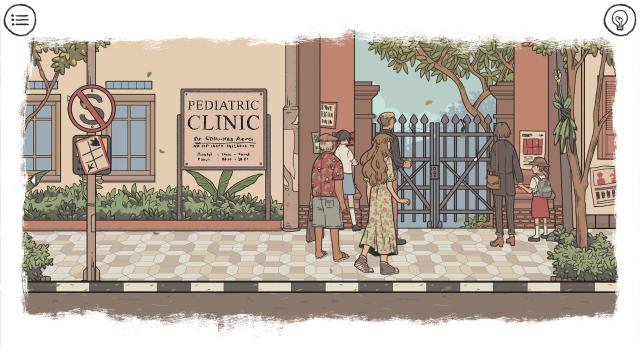 In the end, When the Past was Around is an example of earnest intentions not doing enough to gloss over mismanaged execution.  By being so ephemeral at under 1.5 hours and costing $8.49, even with unskippable cut scenes, only the most basic story beats about Eda & Owl are revealed.  And despite the wonderful presentation, there's no strong connection made between puzzles and storytelling.  Considering just how unengaging Eda's emotional journey becomes, I can sympathize with her wanting to keep it buried.