From its solid controls to its stunning neon atmosphere and pounding synthwave soundtrack, Cyber Hook is a tight little package.

One of my favorite approaches to game design is taking a small, simple group of tools and setting out to find many interesting ways to use those tools over the course of an entire game. There's something deeply satisfying about gaining mastery over a skill to the point you start to see new uses for it. Cyber Hook is built entirely around this concept and doesn’t just do it well, but does it with a great deal of style too. 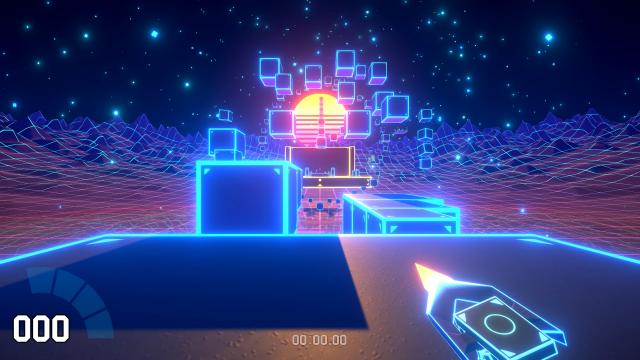 At its heart Cyber Hook is a first-person platformer. The goal of each stage is to simply navigate yourself from the starting point to an exit door. Right from the start you have access to all of the skills you’ll ever get: running, jumping, climbing, a double jump, a slow time mechanic, a gun, and the star of the game - the grappling hook. Each of these skills is as simple to use and comprehend as possible. The only other thing you'll need to keep an eye on is a speedometer. Being physics based and a time trial-focused game means that monitoring your character's speed is essential. To achieve optimal times you’re going to need to keep your momentum up as you traverse each stage and if you want to maximize the launching power of your jumps and grapples you’ll soon learn how essential speed really is.

The time slowing mechanic is a really great option to have when starting out. It slows your movement down a great deal and also slightly extends the reach of your grappling hook for a short period. This makes it incredibly helpful when learning the game, but since the stage timer keeps running at regular speed it’s definitely something you'll want to wean yourself off of in order to improve your times.

Once you achieved a slight amount of mastery over your speed and grapples, that's when the game really starts to feel incredible. The movements you can pull off and link together let you almost bend the levels to your will. The feeling is comparable to Neo learning to take control of The Matrix; the game hasn't changed, but your understanding of it has. 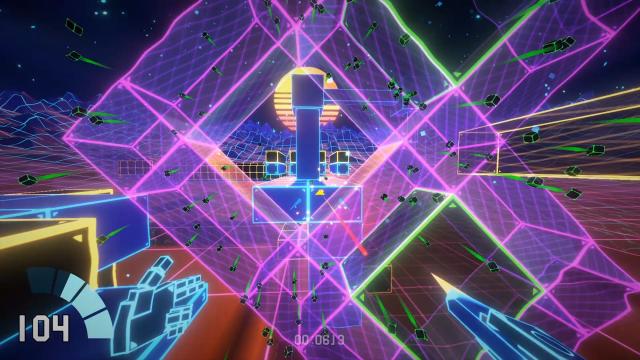 The simplicity of the Cyber Hook’s design extends to its brilliant art style. A very small color palette not only helps make objects instantly identifiable, but all of the colors are vibrant and really pop. Beyond making the puzzle-like levels easier to navigate this helps give each level an instant sense of personality. The early stages are littered with standard blue blocks, which feel safe and easy to understand, while levels with a stronger focus on red blocks have a sense of danger to them. The yellower levels give the idea that the player is going to be herded through specific areas, green is a warning to watch for targets that need to be dealt with, and purple marks the stage out as one that's going to require the use of more skillful grappling and maneuvering (purple blocks are usable as a grapple point, but are also deadly if touched).

As soon as you’ve completed the first few stages levels will typically incorporate all of these colored blocks, so from that point onwards you'll immediately get a sense of what is in store for you in terms of the types of challenges ahead. The synthwave soundtrack fits the art style wonderfully as well, and really solidifies the 80s retro style the game is shooting for. 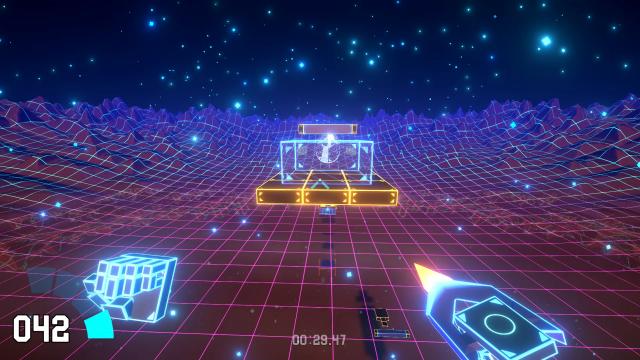 Cyber Hook has a classic progression system where you have to beat each stage to unlock the next one. Each area is also grouped into batches of 11-12 levels and in order to progress to the next batch of levels you’ll have to earn a high enough rating on the previous group of stages. This often means going back to stages you’ve previously beaten in order to improve your completion time. Simply beating a level - regardless of speed - will unlock the next one in that batch, but only by beating them quickly enough to be rewarded with 1-3 gems will you be able to open up the next batch of levels.

I like this system for two reasons. Firstly, the game forcing you to play through stages in a precise order allows it to teach you the skills you'll need to succeed later on and also allows it to slowly add new obstacles so as to not overwhelm new players. Secondly, by forcing you to replay levels you’ve already completed you get the opportunity to feel more adept, as you can use techniques you’ve learned in later stages and adapt them to the earlier levels which may have initially felt intimidating.

Of the 82 stages included in the game very few feel redundant, and even late into the game new and interesting level compositions are introduced. Between the first few batches of stages an NPC character will give a very brief description of new skills that will be helpful in the coming stages, but in all honesty the levels do a wonderful job of teaching players on their own. It seems superfluous to even have a single NPC at all. And through the last half of the game the NPC that is included does nothing but stand around in the main hub looking silly. 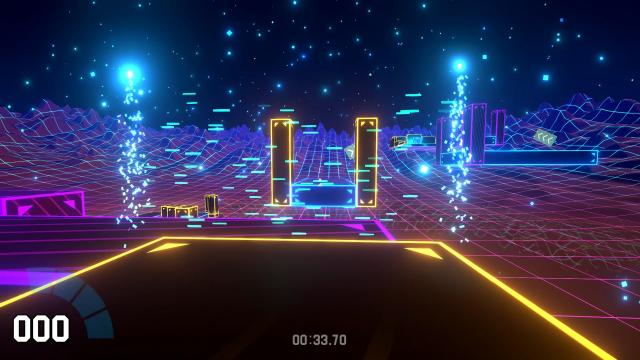 Speaking of the main hub area - it's a phenomenal playground to mess around in. Outside of the gun mechanic not being very useful, you can really play around in the hub and practice any ideas you want to refine that will help you out later in the game.

After you’ve beaten each stage then, outside of going back to improve your times, the only other mode available is a Marathon Mode. There's a Monthly Marathon, which after the game launches will presumably give players eight assorted stages from the main game to set their personal best times on each month, and a Full Game Marathon, which is self explanatory. In both of these modes you play stages back to back, with the timer never stopping, even when you die or restart a level. While it's nice to have to have something more to dig into after the main game, Marathon Mode ultimately just feels like more of the same, in a longer format.

Initially thinking it was a simple leaderboard, I didn't bother to check out the leaderboards section until I was done with the main game (at which point I decided I should probably check it out and see how I stacked up). I was pleasantly surprised to see an option to download and watch playthroughs of the top players. I wish I had been aware of that earlier on, when I was stuck on a few levels, so that I could find out how others had approached them and perhaps learned some new tricks from those more skilled than myself. It's mind-boggling to see how some players have already pushed the game's mechanics and physics to the limit to set absurdly low times on stages by grappling at top speeds and throwing themselves past areas I struggled with, or just having the reflexes to fling themselves from grapple to grapple without ever needing to break. This is going to be an incredibly fun game to see speedruns for when speedrunners have had some real time to dig in and optimize their strategies. 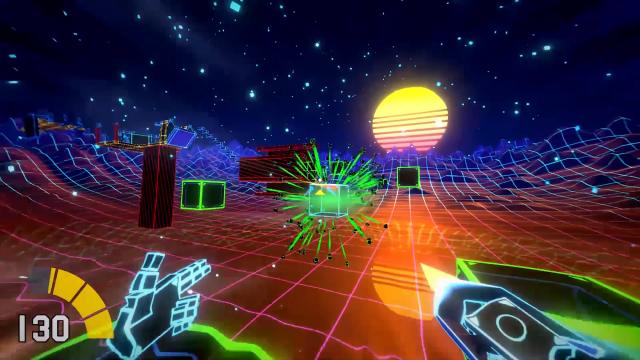 From its solid controls to its stunning neon atmosphere and pounding synthwave soundtrack, Cyber Hook is a tight little package. It's ripe for those willing to experiment with its physics and mechanics to find unique ways to maneuver through its 80+ stages, and you can learn from the best players via the downloadable replays, or just watch in awe as they completely demolish the game in ways that seem nearly inhuman. Players looking for a fast-paced time trial-centric game are going to find a lot to love about Cyber Hook.

This review is based on a digital copy of Cyber Hook for the PC, provided by the publisher.