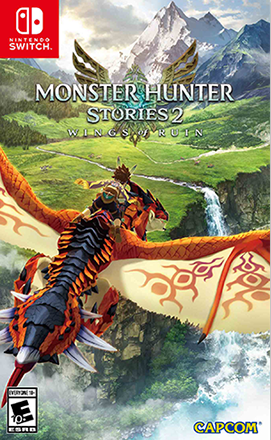 Riders on the storm.

Life is good for Monster Hunter fans in 2021. First, they were treated to a new mainline installment in Monster Hunter Rise, and now they can sink their teeth into the RPG spin-off Monster Hunter Stories 2: Wings of Ruin. An indirect sequel to the 2016 3DS game, it steers the series away from its bread and butter — real-time monster stalking — toward turn-based combat in the classic JRPG mold. Ultimately, it's proof that the franchise has great potential for growth outside the bounds of its traditional mechanics.

Although Wings of Ruin is set in the same universe as the mainline Monster Hunter titles, it approaches the world of monsters from a different angle. Most of the heroes of the story, including your custom-made protagonist, are Riders — humans and Wyverians (think Tolkien's Elves) who create bonds of friendship with monsters instead of hunting them and harvesting them for resources. 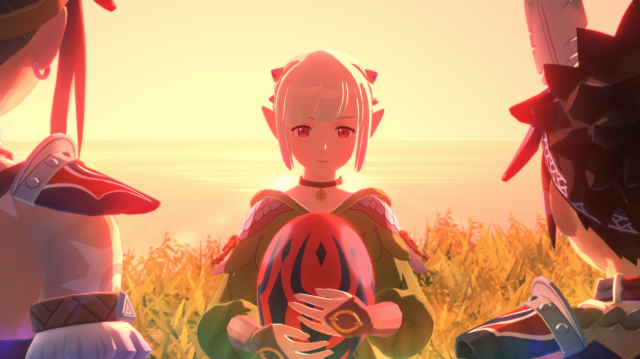 The game's story commences in the Rider village of Mahana on the island of Hakolo, where a dragon-like Rathalos named Guardian Ratha departs unexpectedly and leaves behind a curious egg. As the grandchild of Guardian Ratha's rider, Red, the main character joins forces with a mysterious Wyverian named Ena to protect the egg, investigate the disappearance of Guardian Ratha, and, eventually, discover the truth about unexplained phenomena occurring throughout the world.

The story in Wings of Ruin is, ironically, one of its least impressive parts. It's not bad by any means, but it struggles to leave a strong impression. The biggest issue is that the voiceless blank-slate main character isn't especially compelling — his importance is defined almost exclusively by his familial relationship to Red, who appears in flashbacks as a far more charismatic personality. The supporting cast fares better, particularly Ena, whose deep connection to Ratha and Red forms the emotional backbone of the game. Navirou, the main character's Felyne sidekick, is a mixed bag. He's a little chatty and whiny at times, but he's also a cute and loyal pawtner, er partner. You take the bad with the good. 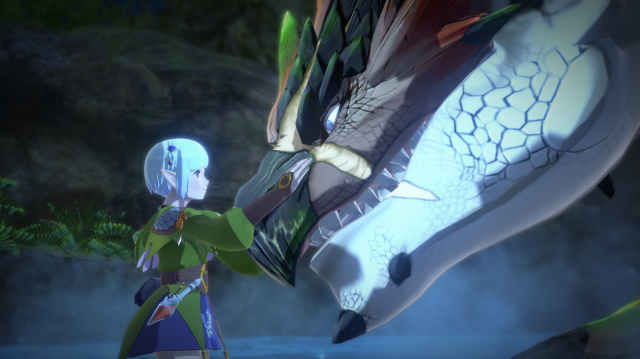 Wings of Ruin might not excel in storytelling, but it earns high marks for its battle system and monster management framework. Indeed, judged only on the way in which the game treats monsters, or "monsties" as they're called once they become friendly, it's one of the better games of the year.

Here's how it works. Think of monsties as your party members. You'll start with a borrowed monstie, a Velocidrome named Ranmar, but soon you'll have a roster of up to six different monsties, each with its own skills, stats, elemental strengths and weaknesses, and attack types. You'll deploy them in real-time combat against enemy monsters, across several open-air zones or in randomly-generated dens. Along the way you'll collect eggs, from which you'll hatch new monsties, some rarer than others, that you can use to reinforce your party. 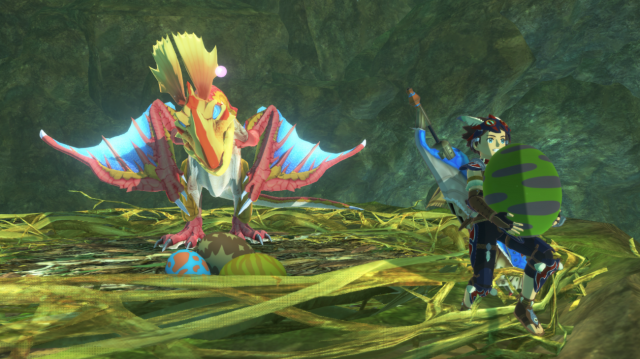 Both elements of this loop — collecting and raising monsties and then deploying them in combat — are incredibly rewarding. Managing the strength and skill of your monsties is particularly compelling, due to a genetic engineering component. Each new party member is born into the world with a somewhat random group of genes, which include elemental and attack type variants. Some gene slots are unlocked upon hitting a certain level threshold, while others are sealed until you use a stimulant to unlock them. You can even use the "Rite of Channeling" to take a specific gene from one monstie and transfer it to another, achieving what the game calls a "bingo bonus", a string of same-elemental or same-type genes that provide a boost to attack power.

The more you think about the system, the more paradoxical it becomes — Riders prize the bonds of friendship between human and monstie, but also dabble in eugenics — but mechanically it provides outstanding depth and customization. 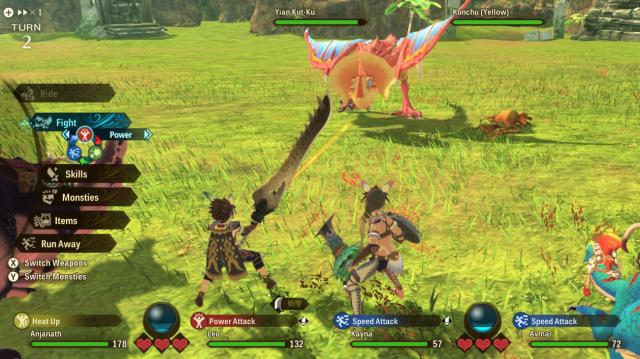 The other half to this loop, turn-based combat, is similarly impressive. Everything unfolds according to a predictable and approachable rock-paper-scissors format, where strength attacks beat technical, technical attacks overcome speed, and speed attacks outmatch power. The most reliable strategy, then, is to read your opponent's attack type and then adjust your tactics and party members accordingly. If you're fighting a Yian Kut-Ku, better have a strength-type monstie in the wings. Run afoul of a Tigrex? Swap to a technical-type, and quick. With this strategy in place, you can more easily perform Double Attacks, joint assaults between Rider and monstie that do huge damage and boost the kinship gauge.

This kinship gauge, one of the many wrinkles to combat, is similar to a magic meter. You can draw upon it to perform special skills or use basic attacks and Double Attacks to fill it to the max, at which time you can mount your monstie, replenish your health, and perform a devastating (and beautifully-animated) kinship attack. Another wrinkle: monster parts. By toggling your weapons — you have access to multiple Monster Hunter weapons that deal bludgeoning, slashing, or piercing damage — and targeting specific body parts, you can topple a monster, prevent it from deploying its most powerful attacks, and even earn some valuable crafting resources in the process. 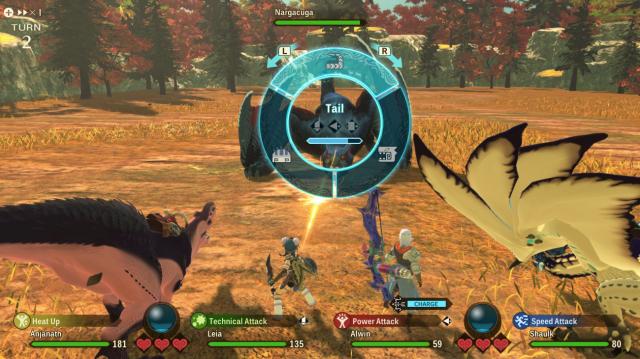 While the tactics and spectacle of turn-based combat in Wings of Ruin are great, the roads that lead to that combat aren't the most engaging. Along your journey, you'll end up in several towns, settlements, and cities, which act as hubs from which you'll set off on adventure. While the change of scenery is most welcome, the questing loop is a bit tedious. Invariably, you'll meet a town elder or spokesperson who will send you on several samey monster hunts before you can push the main quest forward. It hurts too that many of the open-air zones adjacent to these hubs feel a bit lifeless and empty, and that the dens that branch off from them reuse a lot of the same layouts.

Now, there are plenty of diversions to keep you busy in between story quests. Townspeople offer interesting side missions and there's a quest board in each town with many different challenges. From here you can even participate in competitive and cooperative online multiplayer modes. You might test the strength of your monstie party against rival human-controlled parties, or team up with another Rider to take down a ferocious monster. 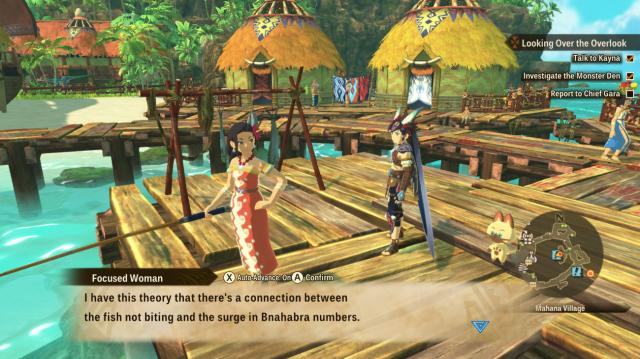 When you combine these online features with all the optional side missions and the main quest, you're looking at an extraordinary amount of content. You might be able to beat the game around the 50 hour mark, but it should take double that to catalog every monster, max out all your monsties, finish every quest, and experiment with every genetic combination. Then there's the Elder's Lair, unlocked once you beat the main game. This is a sprawling area filled with high-rank monsters and exclusive species that will keep you occupied long after the credits roll. When you add all this together, and factor in post-launch content updates from Capcom, it's clear that Wings of Ruin will provide you months of entertainment.

It will also provide visuals that are sometimes great, sometimes mediocre. The monsters themselves look excellent; they are detailed, convincing animals that come to life in combat. Even better are the attack animations, particularly the kinship attack varieties. They are overwhelmingly spectacular. The animators at Capcom and Marvelous really did some amazing work here.

Less amazing are the game's environments. The low-polygon scenery isn't always convincing, the textures are on the muddy side, and there's pop-in galore. 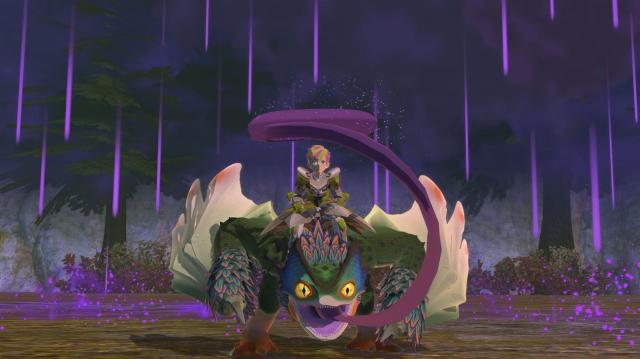 In general, though, despite pop-in, Wings of Ruin performs adequately. The unlocked framerate dips here and there, but in general it poses few problems. I experienced one crash, but a single soft lock in 60 hours is not a deal-breaker by any means.

Finally, the game's music is solid. The town themes are catchy and upbeat and the battle tunes are appropriately high-energy and high-stakes.

Thanks to its thoughtful diversion into turn-based RPG mechanics, Wings of Ruin is a very solid entry in the Monster Hunter franchise. Its monster management and combat systems are engaging, nuanced, and often addictive. Its wealth of content bestows upon it extreme value. And its animations and music are lovely. The game's story and mission structure are weak points, and the graphics, when inspected up close, are lacking, but in general this is a remarkable role-playing game that demonstrates the breadth and versatility of the Monster Hunter series.

This review is based on a digital copy of Monster Hunter Stories 2: Wings of Ruin for the NS, provided by the publisher.