A very legitimate game of the year contender.

The dangers of judging a book by its cover are well documented, and perhaps the video game equivalent of “judging a game by how likely it is to succeed” may need to be etched into our minds as well. A game describing itself as an entry in the rather barren first person platforming genre, developed by relatively unknown One More Level games, and published by 3D Realms of Duke Nukem Forever infamy, probably didn’t seem like a spectacular bet for a good game. Nevertheless, Ghostrunner is here and, in spite of the odds, not only is it a good title but a great one - and a very legitimate game of the year contender. 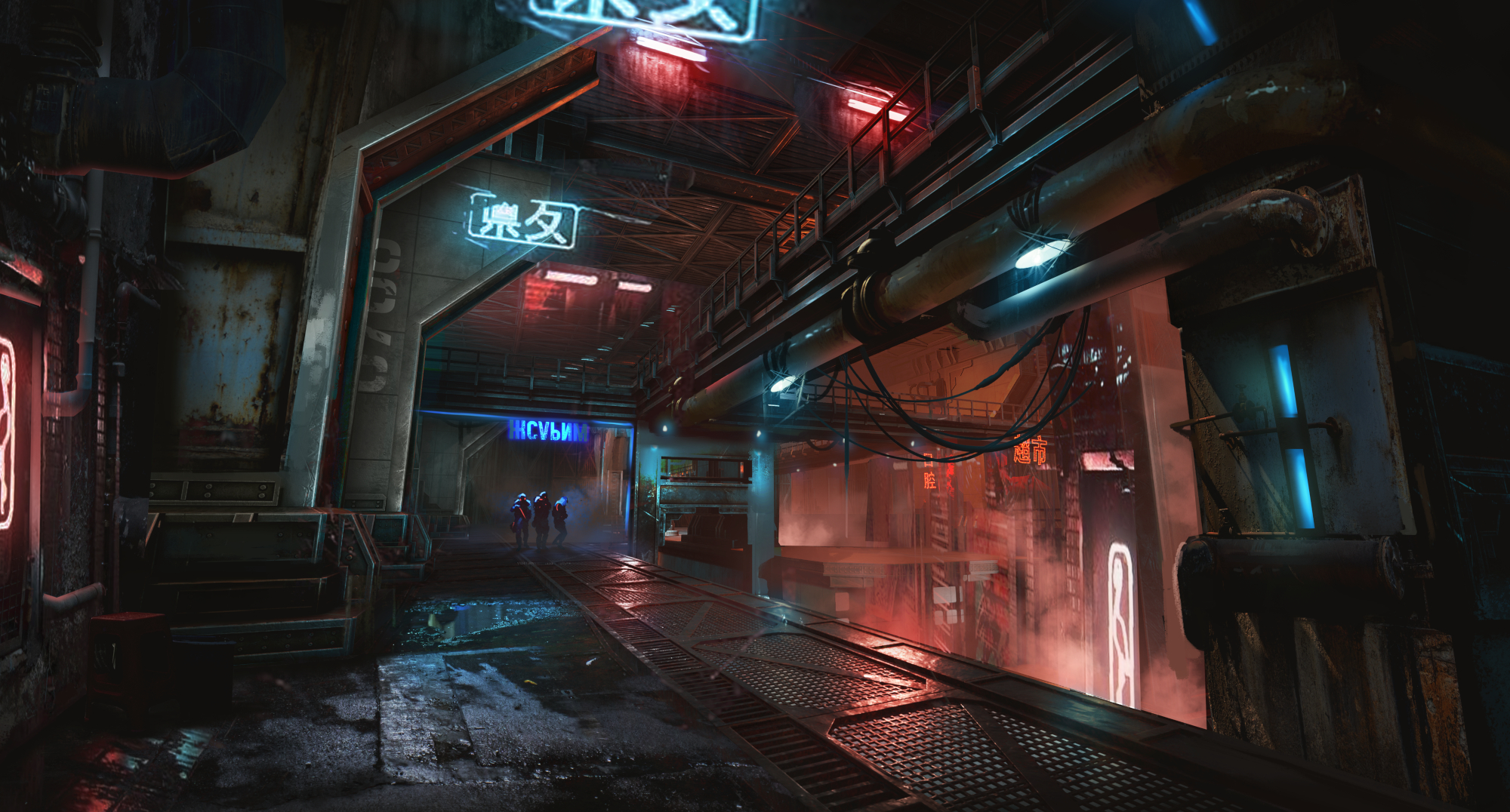 Ghostrunner’s setting is an intriguing one: a dystopian future where humanity has crowded inside a singular tower to escape an apocalypse. You play as a titular Ghostrunner, a cyborg peacekeeper of sorts who is responsible for protecting the tower and the people housed inside. The Ghostrunner has lost most of his memories and abilities after a battle with a lady cosplaying as Doc Oc left him incapacitated and the other Ghostrunners dead. With the world now ruled by a tyrant, the surviving Ghostrunner must set out to reclaim his powers and save humanity with the help of a friendly rebel and an omniscient robot voice that lives in his head.

Ghostrunner is a surprisingly good-looking game; the cyberpunk aesthetic is well done and provides an interesting background for the action. Graphical fidelity is high quality as well. If I had been shown a screenshot of this game a year ago and been told it was from Cyberpunk 2077, I would have probably believed it. These sections are broken up by the occasional transition into a “computer world,” represented by a colorful, digital palette. While the artistic distinction is nice, it would’ve been interesting if the real world had a bit more color variety as well. 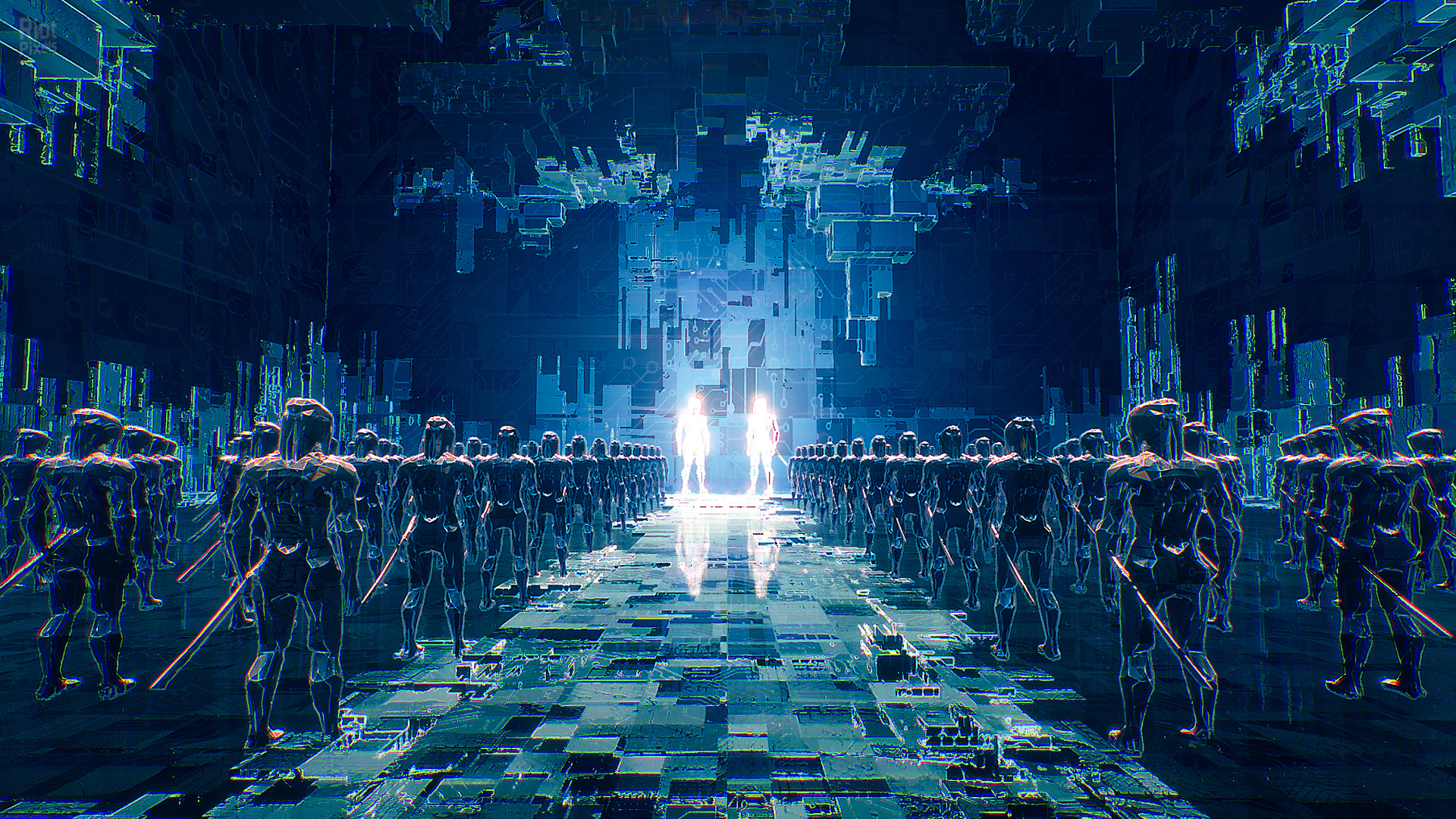 The structure of the game is a single, cohesive story broken up into a series of missions. Missions largely follow up directly after one another, so the story remains connected throughout. The level based structure primarily seems to be put in place for players who want to replay specific parts of the game without having to go back through the entire title up until that point. The game's 17 missions are all broken into fairly bite-sized chunks, which provides some good stopping points while not feeling too disconnected from the overarching narrative.

Despite the intriguing setting and aesthetic, Ghostrunner doesn’t do a whole lot with its plot; the narrative is fairly straightforward and predictable. For what it’s worth, there are optional discoverable lore entries for story-focused players, but for the most part Ghostrunner is simply concerned with providing enough of an excuse to keep its story moving and pushing the player into new gameplay areas. The rather simplistic story is a shame, especially given how much potential the backdrop of the game contains. The introductory cutscene suggests a lively city with multiple locales, but despite this the only other humans you ever interact with are enemies being hacked apart, and the occasional voice coming from inside a house telling you to get lost. 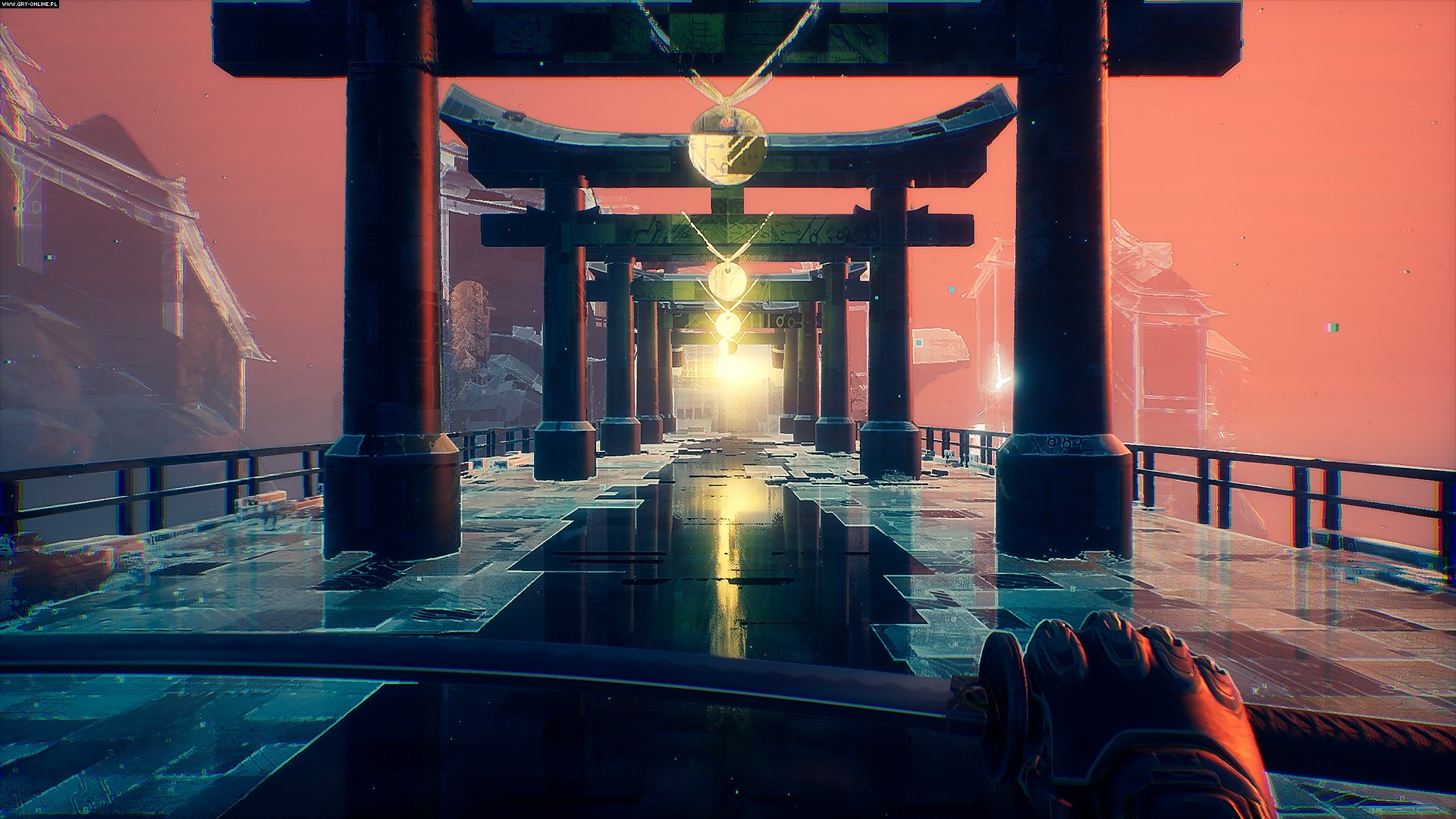 That said, the heavier emphasis on the interactive components is apparent, because Ghostrunner is nothing short of incredible on that front. Gameplay occurs from a first person perspective and is primarily a mixture of platforming and sword-based combat. Players have access to a wide selection of movement options to help them navigate the environments, such as a wall jump, grappling hook, dash, crouch, and several other tools. Calling it platforming doesn’t feel like it does it justice, as it’s much less about precision jumping and more about quick reactions and picking the right option to make death-defying leaps.

And the level design takes advantage of the myriad of tools at every opportunity. Navigating Ghostrunner’s environments requires making use of all the tools at your disposal, along with some quick reflexes. It’s a little overwhelming at first, and the game has no qualms about throwing you in the deep end, but before long you’ll be effortlessly bouncing between various walls and obstacles like the cyborg ninja you are. It’s difficult to overstate how satisfying it is to put everything together and apply all the tools at your disposal to navigate an environment. 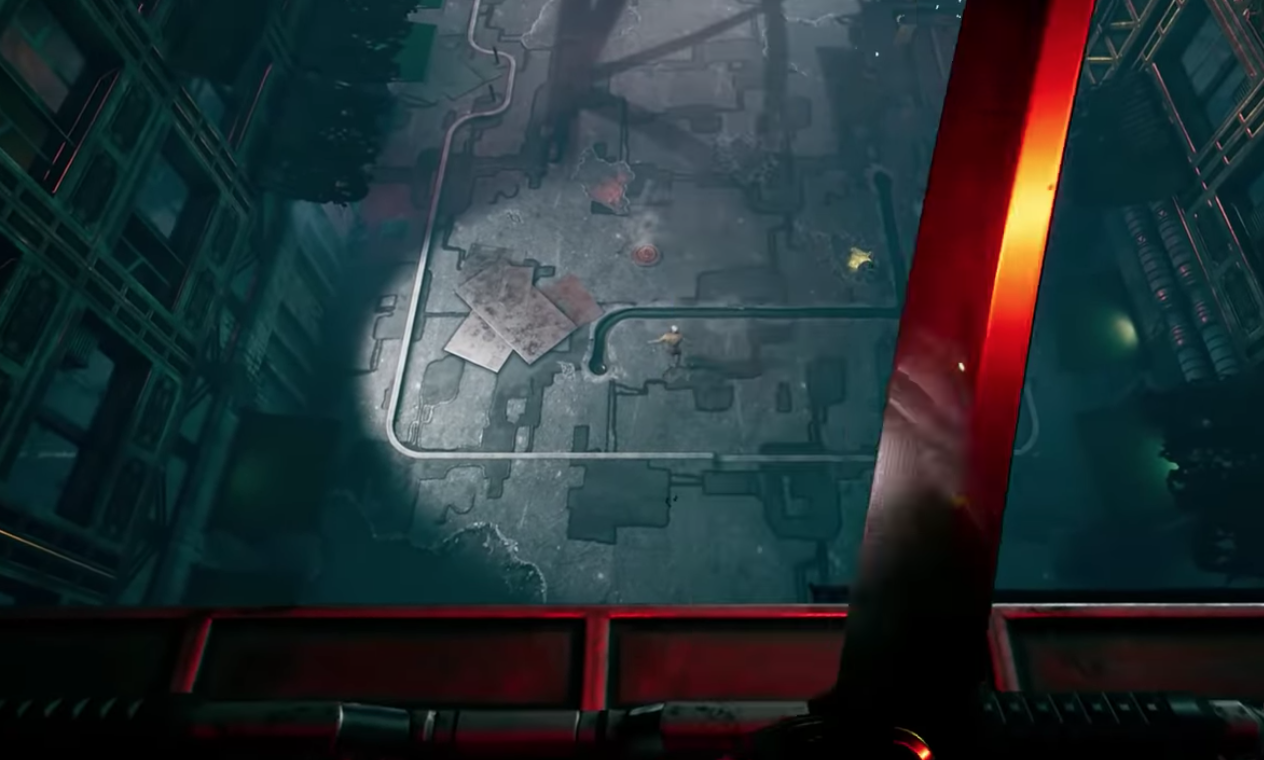 One aspect that takes Ghostrunner and places it a notch above other first person games with a heavy emphasis on movement such as Mirror’s Edge is the speed at which the game operates. Unlike other titles with a similar focus, Ghostrunner almost never forces the player to slow down. The various movement animations are all very quick, maintaining that constant sense of movement, rather than having to feel like the game is waiting on the player character to pull themselves up onto a ledge or something. Virtually any level can be played from start to finish while maintaining the same, constant, quick speed. Even the way Ghostrunner handles its fail state is built around getting the player back into the action, with virtually instantaneous respawns. Any slowdown in this game is squarely on the player’s shoulders.

Movement has rarely felt as good or as satisfying from a first person perspective, and while it’s certainly enjoyable in its own right, where Ghostrunner truly shines is with its combat. Combat in Ghostrunner takes all of the movement aspects mentioned before, and then asks the player to navigate a smaller but more open-ended environment while dealing with a multitude of armed enemies. Combat areas are usually littered with various platforms, grapple points, and wall-running opportunities, giving the player a myriad of approach options. There’s a small degree of strategizing on display too, as choosing where to enter the fray initially can be essential to not immediately being vaporized. 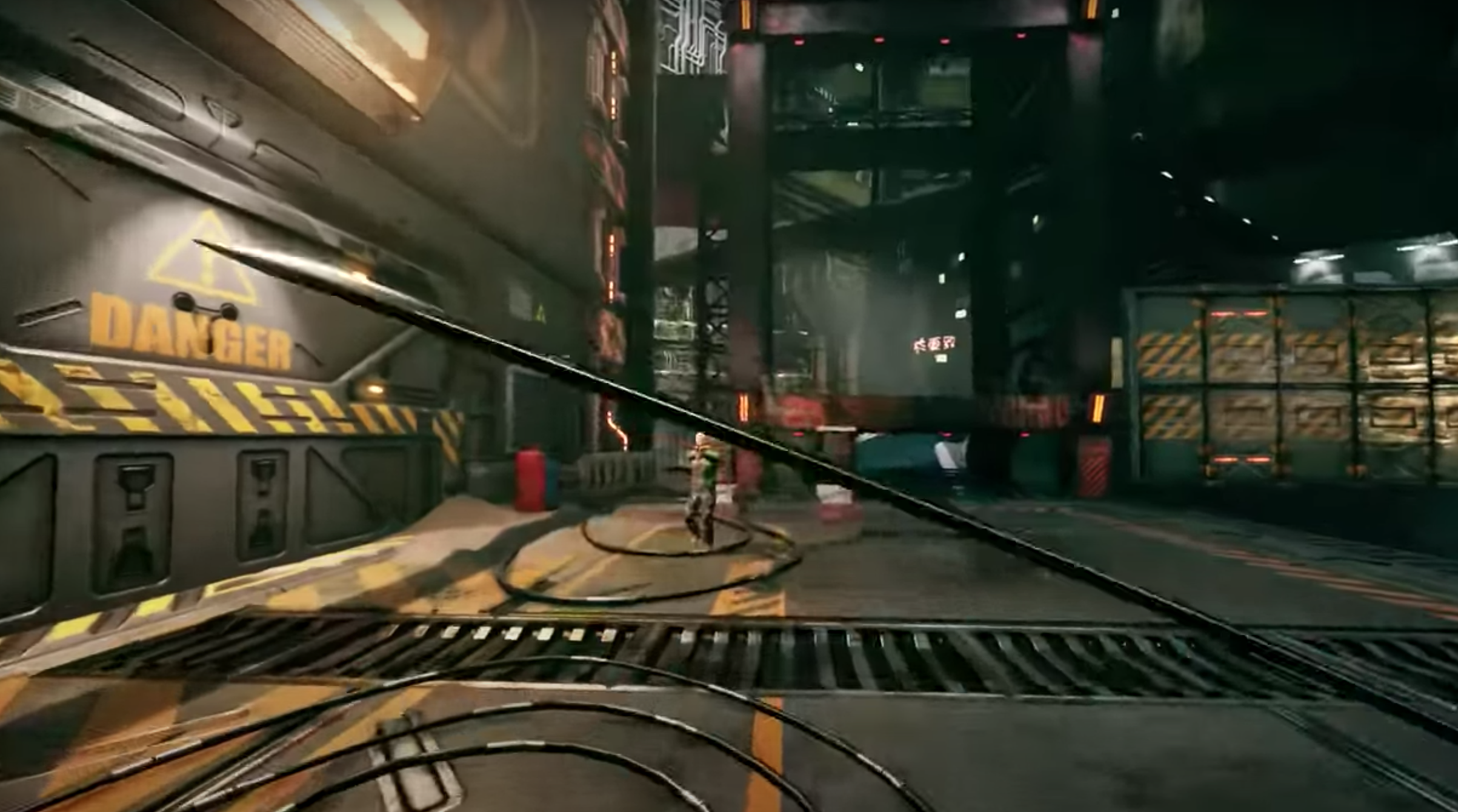 Both the player and regular enemies die in a single hit, but while you're armed with a sword, most enemies have some sort of gun. The challenge, then, lies in being able to consistently make use of the various movement options at hand to get in and secure kills while avoiding being shot. Standing still at any point is almost a guaranteed death sentence, so the player is consistently forced to move around and react on the fly. What makes this so good is that combat is not just a separate element of gameplay, but rather an expansion of the already great movement available to the player. The game builds on its strengths, and then asks the player to take what they've learned and apply it in a less linear setting.

Enemy variety is solid, with a number of humanoid gun wielding enemies, several melee-focused enemies that require you to dodge or parry with precise timing, several types of robots, and then a couple of oddball enemies towards the end that use some less conventional methods of attack. To help handle the expanding entourage of baddies as the game goes on, players are given access to some combat upgrades as they progress, including a few projectiles, a quick kill, and an ability that allows them to temporarily mind control a given foe. Abilities are limited use, however, and refill by killing enemies normally, so picking the right moment to use them is often important. 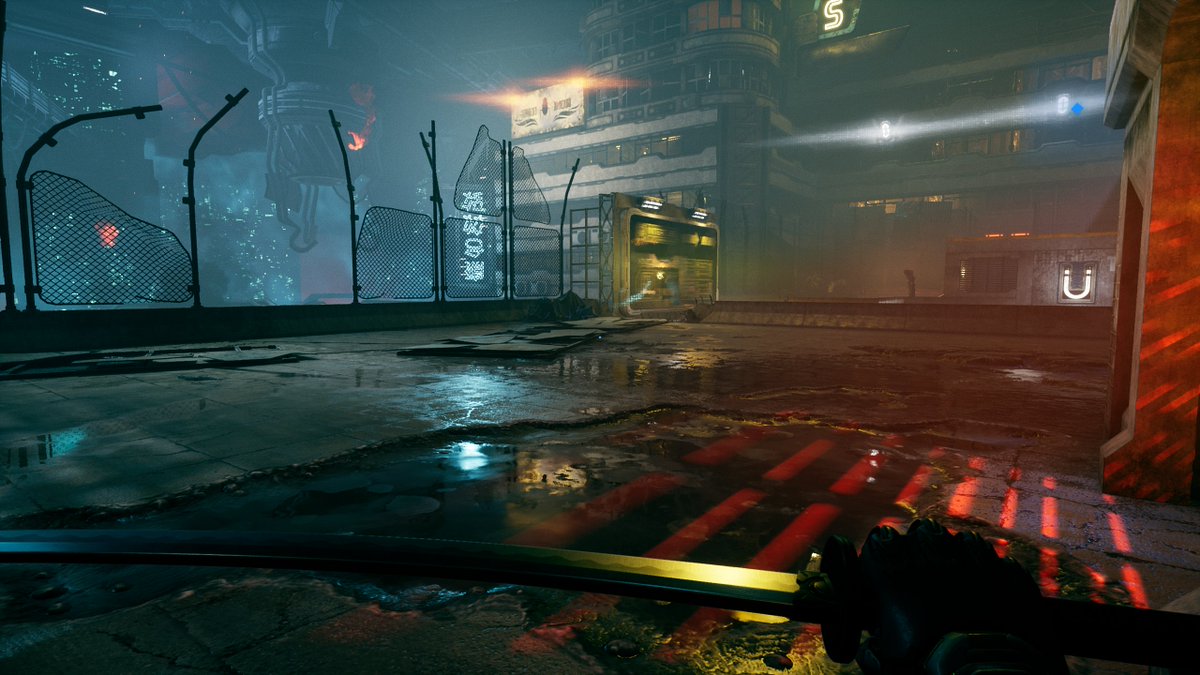 This all adds up to a fast-paced combat experience based around constant adaptation, and it’s incredibly rewarding. When you know what you're doing, there’s a sheer catharsis to the gameplay which not many other titles can reach. Bouncing off a wall, using a well-timed dodge and air dash to get the drop on one enemy, before deflecting an incoming projectile at another with a perfectly timed parry; these are the types of interactions Ghostrunner excels at creating. It’s exhilarating while also being demanding, ensuring that when you look cool you’ve earned it.

On that note, Ghostrunner is a fairly challenging game. I’m not ashamed to admit that I racked up a death count in the triple digits on some missions. It's punishing; a single mistake will often send you back to the last checkpoint, and yet it was relatively rare that it ever felt like it wasn’t my fault. Ghostrunner, for the most part, manages to achieve difficulty without ever being particularly frustrating. This is helped by a fairly generous checkpoint system and the aforementioned virtually instantaneous respawn times, which, again, ensure any downtime is strictly on the player. 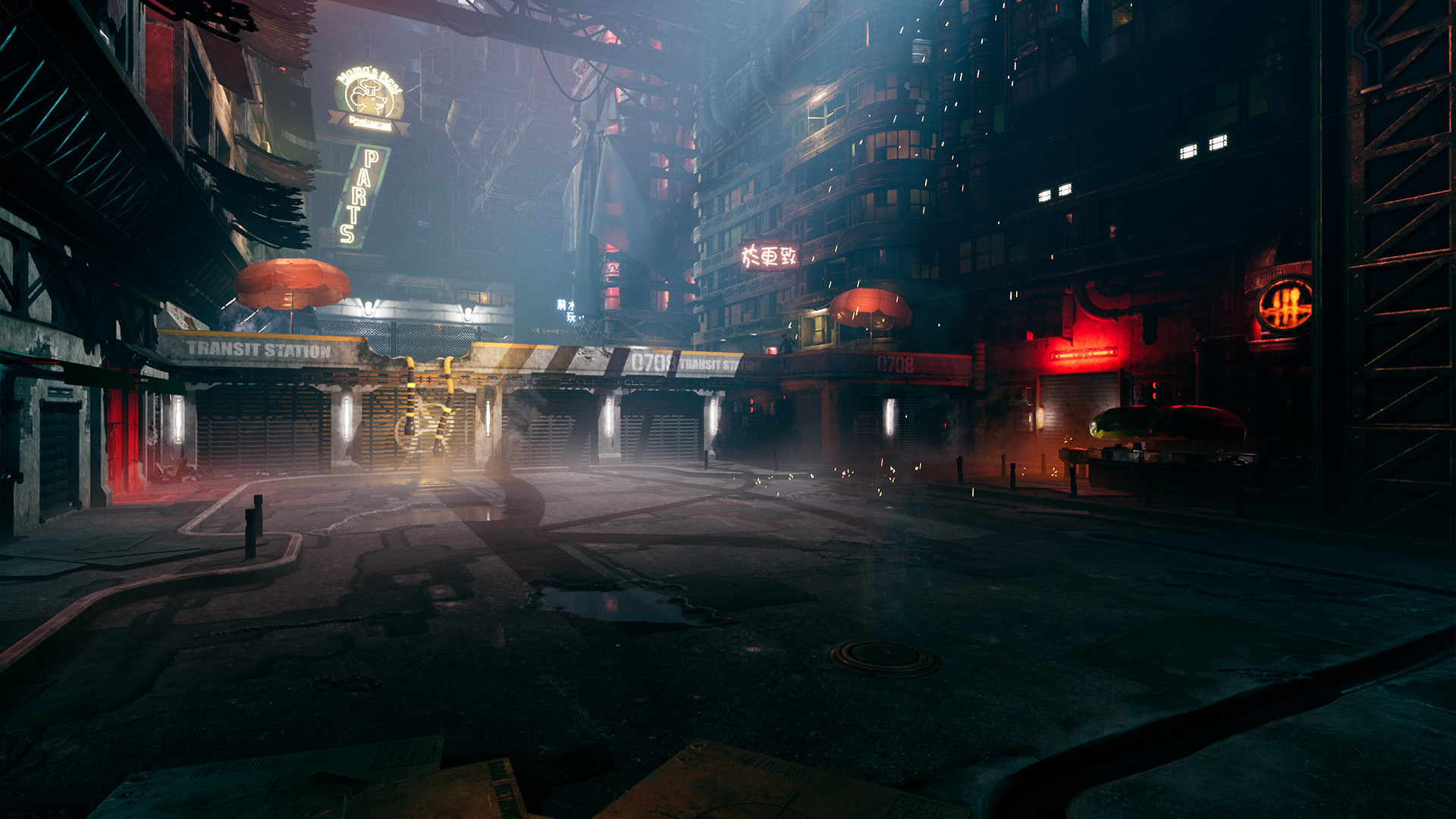 That said, there are some moments where Ghostrunner does feel like it tends to drift a little too far on the difficulty dial to the point of being unfair. This is perhaps most egregious during certain later platforming segments that don’t make it abundantly clear where you need to go in the heat of the moment, and as a result you'll likely have to spend a few tries figuring out what to land or where a not readily apparent grapple point is. There are also a few annoying timing-based platforming segments, which essentially require you memorize when to time an early jump in order to make sure you’re positioned properly to avoid an instant death obstacle running on a timer down the line.

These nitpicks don’t stand in the way of Ghostrunner being a joy to play, however, and it’s a title that only gets better on a second go around. Going back to areas that previously gave you trouble and being able to effortlessly breeze through them is an incredible feeling. The game also encourages players to replay levels and beat them as quickly/efficiently as possible with the inclusion of speedrunning leaderboards. Trying to get through missions in as speedy a fashion as possible is probably even more fun than the initial playthrough. Ghostrunner is about a 9-10 hour game on your first playthrough, but you can likely get that down to inside of two hours on casual repeat playthroughs. 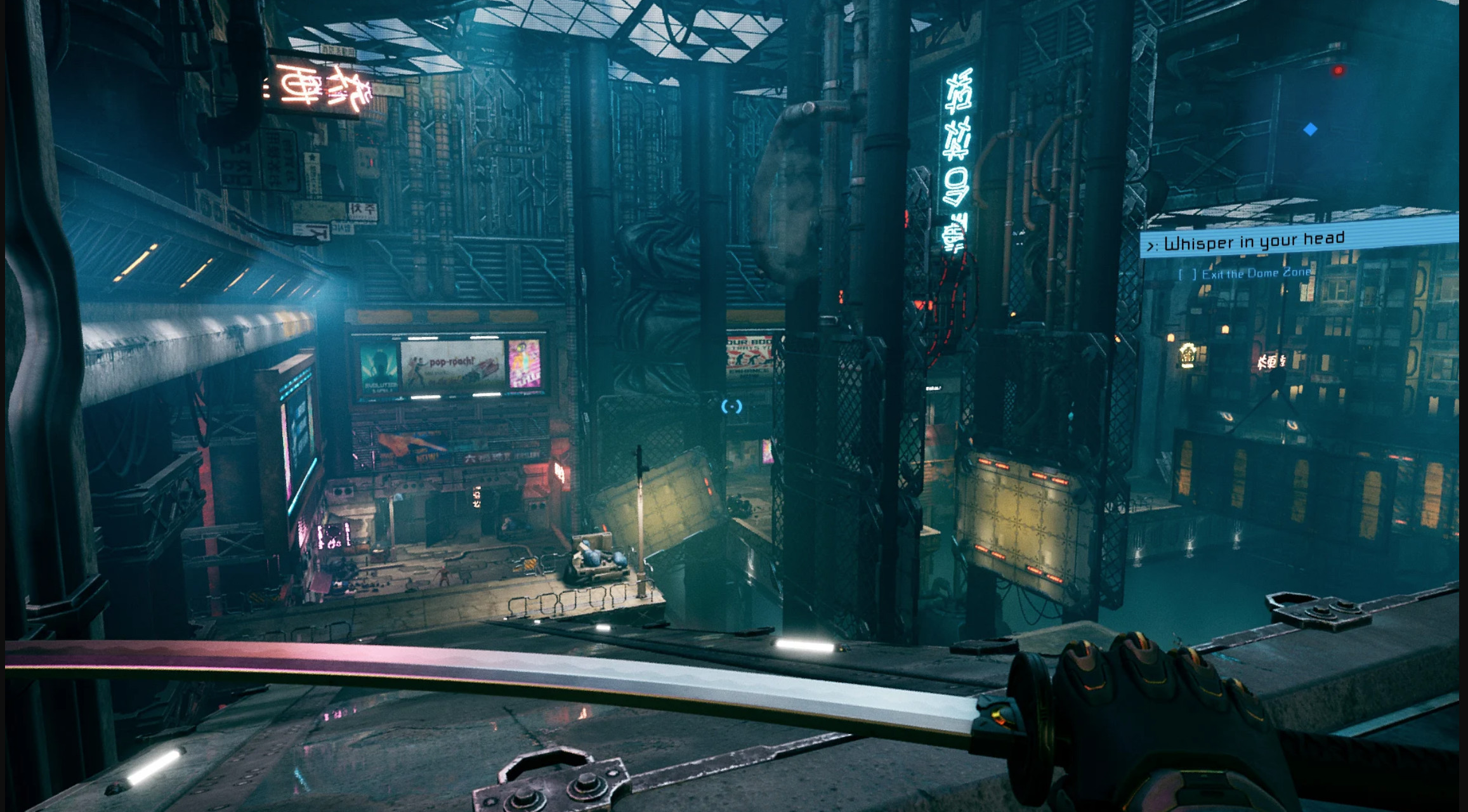 The one exception to this are the aforementioned digital computer world areas, which usually strip you of most of your mobility tools and instead leave you to solve some very simplistic puzzles. These aren’t especially egregious, but they aren’t particularly engaging either, and they run somewhat contrary to the otherwise fast-paced nature of the rest of the game. One could reasonably argue that they’re there for the sake of pacing, but it would at the very least be nice if they were optional on repeat playthroughs.

One final aside that I feel I must include, though, is that I believe this game is by far and away better with a mouse and keyboard. Being able to react and look around quickly is essential to the game’s flow, and this is much more difficult with a joystick than a mouse. Having played it a bit with a controller as well, I still firmly believe that Ghostrunner is worth a try regardless, but a standard mouse and keyboard set-up will elevate your experience in a way a traditional gamepad can't.

Ultimately, Ghostrunner is an exceptionally well designed game which really pushes how far quick, complex movement can be done in a first person game. One More Level has built something special and created a satisfying gameplay experience that few other titles reach. Despite the occasional iffy difficulty spike, Ghostrunner is an essential experience for anyone who follows fast-paced action games with deep gameplay systems.

This review is based on a digital copy of Ghostrunner for the PC, provided by the publisher.