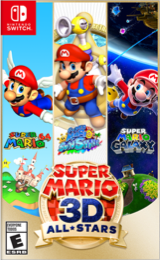 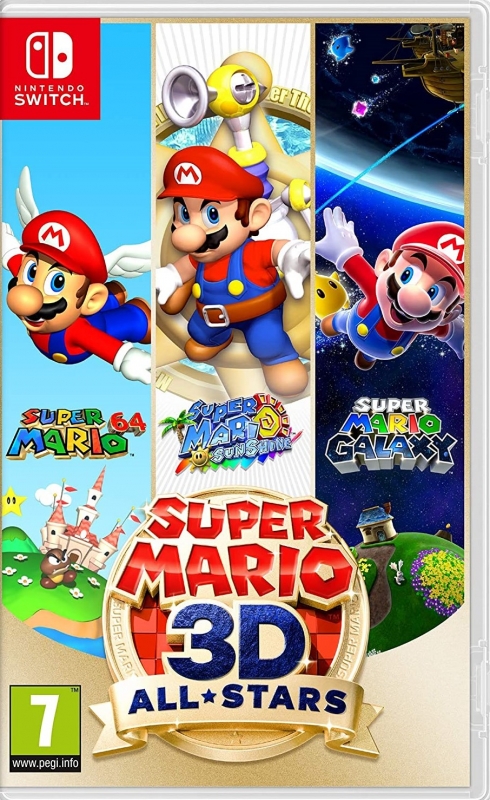 The three-dimensional Super Mario games are held in the highest regard in video game circles — with good reason. They're bold, brilliant, avant-garde, and, in at least one case, revolutionary. The Super Mario 3D All-Stars collection pulls together three of these remarkable titles, adds a music player mode and some minor quality-of-life fixes, and wraps everything in a clean, professional presentation. There are some obvious omissions, including special features typical of anthologies like this and, most glaringly, Super Mario Galaxy 2, but the greatness of the included games shines through.

Super Mario 3D All-Stars includes the following three games: Super Mario 64 (1996), Super Mario Sunshine (2002), and Super Mario Galaxy (2007). Each is available immediately from the main menu, alongside a written summary explaining the story and historical/technological context of the game. Everything in the menu is very sleek, clean, and professional-looking. 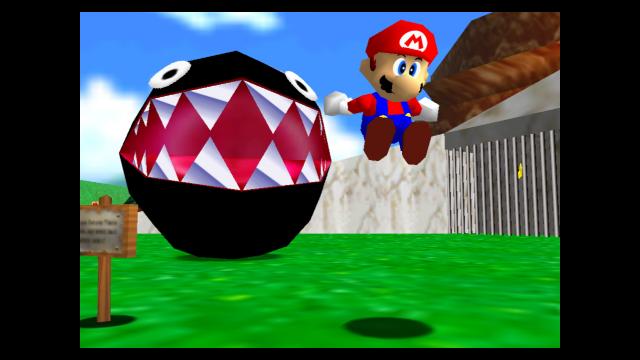 Also included in the main menu are the games' soundtracks, which cover 175 individual tracks. This is a great bonus feature for Super Mario fans and video game music aficionados in general. Everyone should find something to like, from the evocative, nostalgic sounds of Super Mario 64; to the bouncy, tropical tunes of Sunshine; to the orchestral might of Galaxy, a candidate for best video game soundtrack of all time.

The inclusion of Super Mario music is great, but the games themselves matter more. On that front, the 3D All-Stars anthology delivers again and again.

The first and most trailblazing title is Super Mario 64, based on the "Shindou Pak Taiou" version, an international version of the game that added rumble support. Its graphics are dated — despite a resolution bump unique to this collection — and its camera a little wonky, but it's overflowing with weird, experimental ideas and elevated by supremely satisfying and tactile movement. Its hub world, a level in itself, remains one of Nintendo's most inspired creations. This is a true masterpiece, through and through. 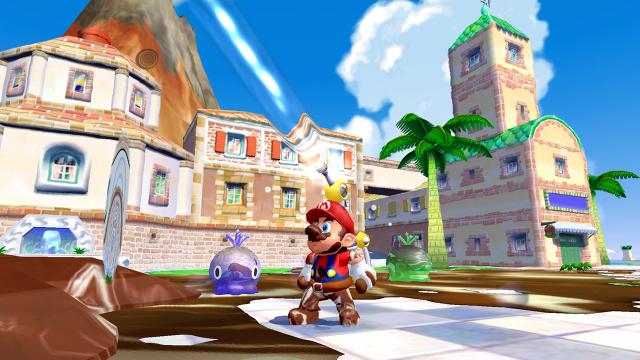 The "weak link" of the collection is Super Mario Sunshine, although only by comparison to the magna opera that flank it. It's still a solid, inventive game with remarkably tight controls and beautiful visuals — it looks better than ever, in fact, thanks to new widescreen formatting and 1080p — but its rigidity and reliance on the water-spouting F.L.U.D.D. device make it less enticing than other 3D Super Mario entries. That said, in a way Sunshine is the most valuable of the lot, only because up until now it was exclusive to the GameCube ecosystem, having never received a re-release or remaster.

For those worried about reproducing Sunshine's GameCube controls, there's bad news and good news. The bad news: the official Nintendo GameCube adapter and controller will not work with 3D All-Stars, which means you won't have total control over water pressure — something that was possible via analog trigger. The good news: Nintendo has assigned this functionality to the ZR and R buttons, which allows players to either move and spray water at the same time, or root themselves and aim the nozzle. It's not a 1:1 recreation, but it works. As for Y-axis camera controls, on Switch they're set to standard, where the GCN original was locked on inverted. In both cases: not ideal for the opposite camp. 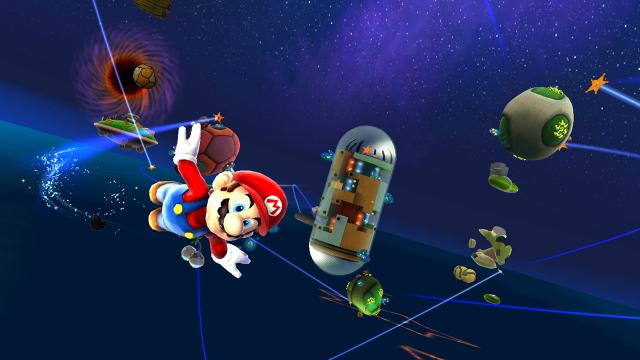 The final game in the anthology is Super Mario Galaxy, a joyous jaunt among the stars with an innovative spherical gravity engine that brings new dimensions to the typical Super Mario 3D platforming. Like Super Mario 64, Galaxy is a landmark, legendary title that has stood the test of time. It's bursting with creative, outside-the-box level designs and platforming conceits, and boasts a surprisingly affecting storyline. Moreover, thanks to this collection, it's more flexible than ever, as controls previously assigned to the Wii remote's IR pointer and gyroscope are replicated either with dual Joy-Cons or Pro Controller. Folks formerly turned off by motion controls in the original incarnation can now play the game entirely with a traditional controller.

While Galaxy in docked mode on Switch is more versatile than it was in 2007 on Wii, in handheld mode the story is somewhat different. If you're playing with Joy-Cons attached, or via the Switch Lite, you'll need to use the touch screen in place of gyro controls. This is technically viable, yes, but far from ideal. 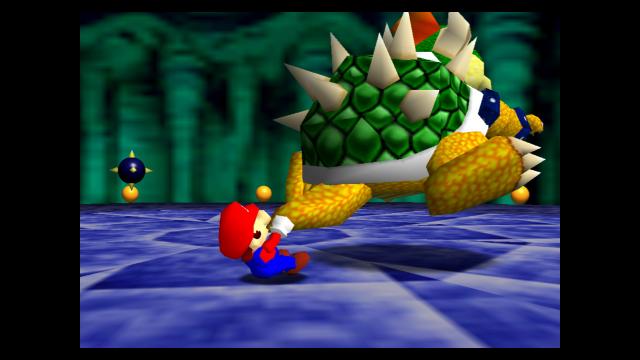 On top of Super Mario Galaxy 2, the 3D All-Stars compendium is also missing the type of special features — interviews, concept art, digitized manuals, etc. — that are common in recent collections from Capcom, Konami, and SNK. Mario, as a character, franchise, and cultural phenomenon, has such a deep repository of art and information; why not leverage it for this celebration of the early 3D games?

In terms of quality-of-life fixes, Nintendo has added some small but noticeable improvements; certainly nothing that can compete with the extraordinary work of M2 or Digital Eclipse, but welcome nonetheless. In addition to traditional controls for Super Mario Galaxy — a boon for the "waggle" agnostic — the collection boasts fonts, HUD elements, and UIs redrawn in higher resolution, plus a 16:9 aspect ratio for Sunshine and Galaxy. This is particularly meaningful for Sunshine as the HUD on GameCube was a bit cramped. On Switch the meters and icons are slightly smaller and pushed out to the margins of the screen, giving Mario some breathing room. It wouldn't be unfair to call Sunshine the most improved game of the bunch. 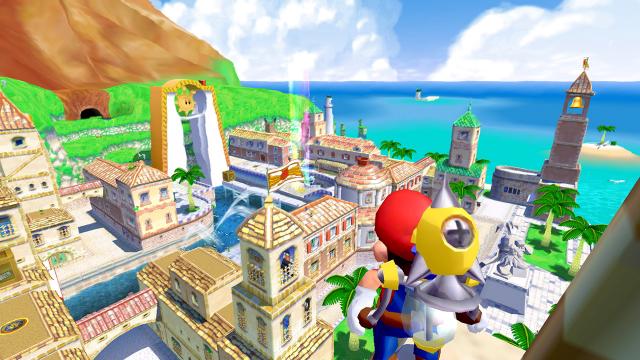 Yet, for all the good things, Nintendo still left out some obvious enhancements, like widescreen for Super Mario 64 or 60 frames-per-second for Sunshine. The lack of customizable controls hurts as well, particularly with Sunshine's camera and Galaxy's touch-screen inputs. Ultimately, the bonuses included in the 3D All-Stars anthology are fine, but disproportionate to the greatness of its games.

Disproportionate might be the perfect word to describe Super Mario 3D All-Stars. It's packed with three important, remarkable 3D platformers, but lacking some of the special features and upgrades fans have come to expect from modern collections. Still, as a convenient way to experience three retouched Super Mario games — two of them masterpieces — 3D All-Stars is absolutely worth your hard-earned coins.