If you're a superhero fan who's exhausted all the DC and Marvel properties on the market, it might be time to check out the world of Sentinel Comics. Conceived as a cooperative card game in 2011, the franchise has now arrived on Switch in the form of turn-based tactics title Sentinels of Freedom. The product of a 2018 Kickstarter, Sentinels of Freedom is, unfortunately, a lackluster entry in the Sentinel universe: a strategy game with poor presentation, tedious gameplay, and monotonous missions, elevated slightly by interesting mechanics and a robust character creation tool.

Sentinels of Freedom takes place in Megalopolis, a city experiencing an unseasonably cold summer and a surge of criminal activity. Fighting back against this crime wave are the Sentinels, a group of heroes armed with superhuman abilities. Included among them are Wraith, a stealthy Batman analog; Unity, who summons support bots; and Bunker, a hulking exo-suit armed with a heavy cannon. There are eight playable Sentinels in total, including a custom hero dreamt up by the player. 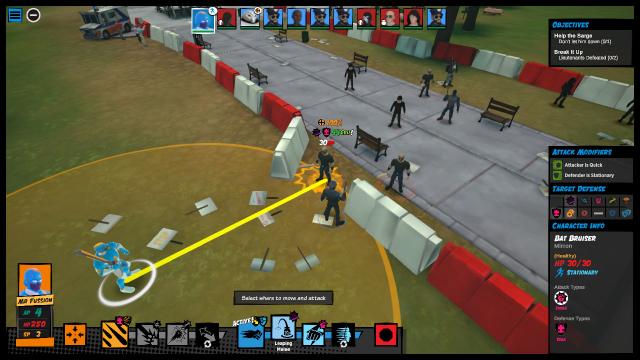 Although Sentinels of Freedom is anchored to an existing intellectual property, its mythology and characters don't seem particularly deep — at least not to a layperson. Many of the heroes tend to blend together and struggle to leave a lasting impression. You can read detailed backstories for several Sentinels in the Data Banks tab of the main menu, but those backgrounds and personalities often fail to emerge via in-game dialogue and interactions. The big exception is Expatriette, an anti-hero sniper who joins ranks with the Sentinels midway and reveals toward the end of the game that she has created a blueprint to incapacitate each hero, in the style of Batman's contingency plans for the Justice League.

This weird, unexpected revelation is very much the exception to the rule, however. Most of Sentinels of Freedom unfolds according to a very safe, conventional Silver Age comic book template, with plenty of cheesy puns and pompous lines like "the pressure and heat of progress and so many villainous attacks have made this city into something beautiful, rare, and strong."

That said, the game's narrative improves as you progress. The final mission reveals a brilliantly preposterous villain that brings to mind the excesses of Wolfenstein 3D. 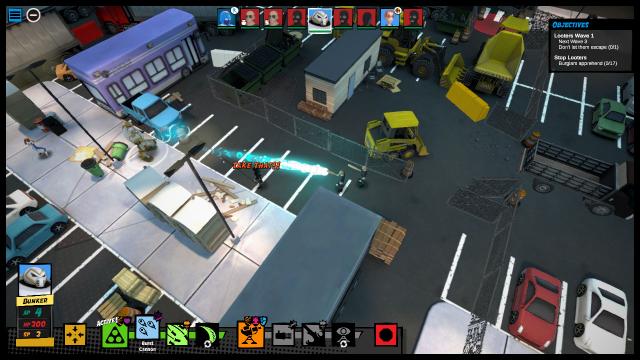 Story, ultimately, is a rather small part of Sentinels of Freedom. You'll spend a matter of minutes watching heroes banter and villains orate, but you'll invest hours out in the field, fighting goons in turn-based battles. It's here that the game demonstrates both its greatest potential and biggest disappointment.

This is how the typical mission plays out: you'll assemble a squad of heroes from the pool of eight playable characters, enter a location swarming with bad guys, tangle with the enemy in a series of turn-based encounters, and complete the mission objective. The order in which combatants move is informed by an initiative stat; the number of actions each can perform is dictated by AP; and specific offensive, defensive, and passive actions are determined by stance.

The mechanics and rules in Sentinels of Freedom are actually quite good, and provide plenty of room for tactical experimentation. Each hero has two different stances, which come with four or five actions, all of which can be swapped in and out via the Training tab in the main menu. Unity's Herobotics stance, for example, gives her access to "Magneato Balls" and "Clone Bot", while her Dinorobotics stance offers "Energy Conduit" and "Raptor Bot". Changing stances mid-move will cost 2 AP, but you can swap at the end of your turn for free. 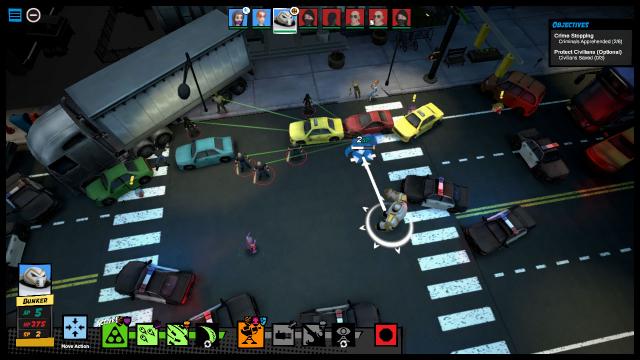 Several of these stances come with built-in sync and vigilance abilities, which add more strategy and variability to the battlefield. Sync refers to team-based buffs that trigger based on proximity. One example: the action "Wave Attack" has a moderate chance to increase damage potential if any ally is near the caster. Vigilance, meanwhile, relates to the reactions of inactive characters. "Retaliation", for instance, has a high chance to attack a melee attacker with a close range attack and deal light damage. Pro tip: be sure to equip the Vigilance "Overwatch" on Bunker; it's overpowered and incredibly useful for crowd control.

The effectiveness of a particular action, sync, or vigilance relies on a rock-paper-scissors framework of attack delivery versus defense method that is mechanically sound but practically confusing. Instead of employing understandable, intuitive terms for attack and defense, the developers at Underbite Games opted for comic book terminology like "Thokk!", "Spak!" and "Zaakt". If you want to damage a henchman with the "Deflect" defense, use "Thokk!". For a baddie with good "Soak" defense, make sure to avoid a "Foom!" attack. This nonsensical arrangement, combined with enemies who look similar but possess wildly different defensive stats, makes it difficult to predict which stances and actions will be useful ahead of a skirmish. 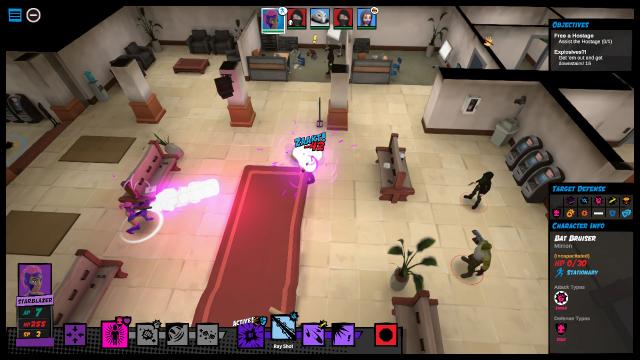 Despite this annoying misstep, Underbite has done its best work with the rules and triggers that underpin Sentinels of Freedom. Player movement, spacing, and team synergy really matter here, especially on the higher difficulty settings.

Unfortunately, these interesting mechanics and tactical opportunities are largely wasted in a series of tedious, overlong missions. Most of the time, your squad will march from point A to point B, fighting wave after wave after wave of goons. With scores of bad guys interrupting your forward progress, missions can take between one and two hours, with a decent portion of that time spent passively watching enemy turns, waiting for your chance to move. With repetitive enemy encounters, lots of downtime, and trite objectives, missions are the weak link in Sentinels of Freedom.

Another point of weakness: graphics and presentation. Due to plastic characters, stiff animations, simple textures, and low-polygon models and backgrounds, Sentinels of Freedom has a cheap, outdated appearance. Resolution notwithstanding, the game looks like something from the early 2000s. Compounding these visual inadequacies is some minuscule print, difficult to read in both portable mode and in docked mode. You'll probably need to lean toward the TV to understand certain messages. 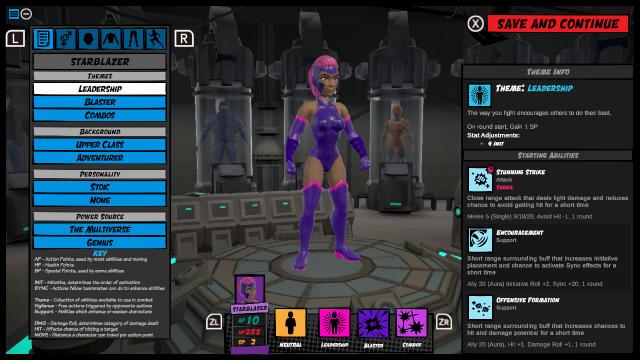 On the other side of the spectrum is the game's character customization tool, which is probably the best individual feature in Sentinels of Freedom. Early on, the veteran squad of Sentinels is joined by a new hero, crafted entirely by you, the player. Apart from designing the look of the character — hair, sex, skin tone, body type, costume, accessories, etc. — you can elect three different stances plus a range of modifications based on your hero's background, personality, and even power source. Are you a former villain? An amnesiac? Did you acquire your superpower through a genetic accident? Technological implants? The result of hard work and dedicated training? Boasting hundreds of possible permutations, this character creator is a huge win.

Regrettably, these personality traits and demographics don't influence your custom hero's morality or alignment in any way. Regardless of your background and loyalties, you're given the same dialogue options, none of which impact your standing in Megalopolis.

In terms of value, the Sentinels of Freedom campaign clocks in around 12+ hours. Outside of the campaign, there are a few things that might extend that running time, including one optional side mission, four difficulty settings, and 27 achievements. There's also a nifty training simulator where you can test your team dynamics and uncover enemy vulnerabilities.

Note: Sentinels of Freedom is technically Chapter 1, with Chapter 2 planned for launch later in 2020 and future chapters on the horizon. Despite this episodic release schedule, the game tells a self-contained story.

Sentinel Comics isn't a household name, and Sentinels of Freedom probably won't do anything to change that. The game boasts an expansive character creation tool and some thoughtful turn-based rules and systems, but those positive features are negated by outdated visuals, plodding gameplay, and a series of repetitive, tiresome, drawn-out missions. Here's hoping for a more heroic turn in Chapter 2.

This review is based on a digital copy of Sentinels of Freedom for the NS, provided by the publisher.