If you thought Ultracore had a long-awaited homecoming, meet 1993 Shenandoah. Where the former lingered in obscurity for 26 years, the latter existed as vaporware for 27. Originally developed for the Amiga by four Swedish teenagers working out of a bedroom in 1992, 1993 Shenandoah was put on indefinite hiatus due to "teenage drama". Krister Karlsson, one of those enterprising teens, revived the game in 2015 and moved it to a modern game engine, careful to retain the original graphics, sound, and effects from the 1993 Amiga production. The result is a living fossil, a 2020 side-scrolling shoot-em-up that would look right at home on Amiga and plays solidly on Switch thanks to a large suite of customization options, impressive world-building, and support for four-player local multiplayer.

Unlike a lot of shoot-em-ups, 1993 Shenandoah has a substantial mythology. In the opening scenes we learn that the former colonel Nestor has escaped custody, recruited an army of mercenaries, and absconded with the Shenandoah, a powerful terraforming device that's deadly in the wrong hands. Futhermore, each planet in the stage select screen gets its own blurb and backstory, and NPCs show up at regular intervals to offer ship upgrades and provide warnings about upcoming bosses. It's rare to say this about a scrolling shooter, but 1993 Shenandoah feels lived-in. 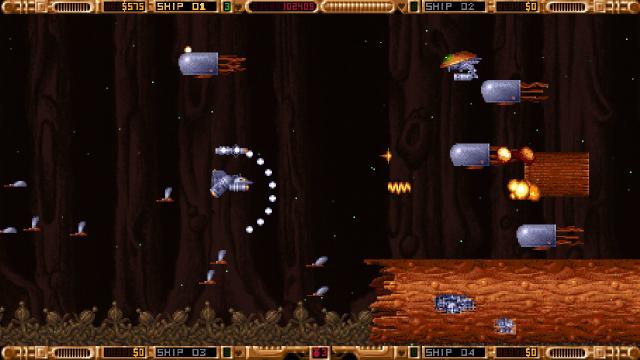 Mechanically, 1993 Shenandoah mostly conforms to the standard formula of a horizontally-scrolling shooter. You'll move left to right (except for the penultimate level which literally flips the script) blasting baddies, avoiding projectiles and environmental hazards, and tangling with large bosses. Everything the game does on this front is serviceable, even if the experience suffers a bit from overlong stages and some slow-moving action.

Where the game truly leaves its mark, however, is with its wide range of ship customization options. Instead of starting with a plucky fighter and gaining power-ups through each level, 1993 Shenandoah offers access to a garage before and sometimes during levels in which you can purchase and upgrade ships and accessories. Using money earned in each stage, players can choose from nine different ships and 25 weapon upgrades. These include everything from the spread-shot "starburst" to the "inferno", a powerful flamethrower. With dozens of possible permutations, ship customization in 1993 Shenandoah is a blast. 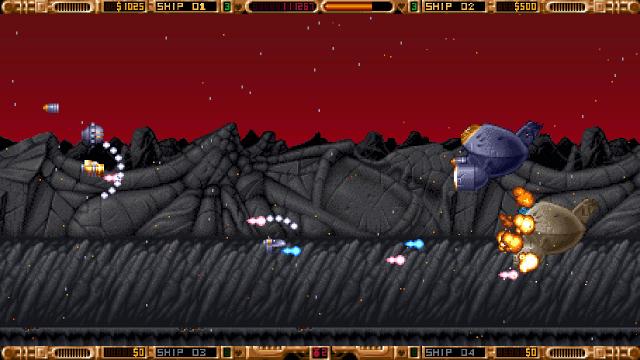 The game's other major win: support for four players locally. The ability to play through the game's 15 levels with three friends in tow is an unlikely but much-appreciated gesture on the part of developer Limit Break. Moreover, each player can craft a unique ship with custom armaments.

In terms of value, 1993 Shenandoah, like the great majority of shoot-em-ups, is relatively brief. A single run on the easiest difficulty setting will take approximately an hour. Fortunately, the game provides three difficulty options — the last one, "hardcore", earning its name — plenty of room to experiment with different armament combinations, and a daunting extra stage that opens up once you finish the main campaign. Regrettably, it doesn't support leaderboards, either online or offline. 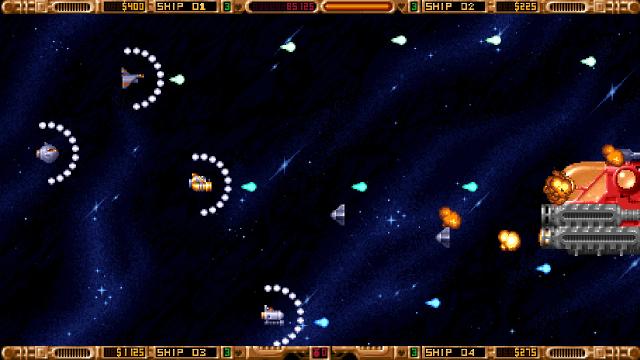 Visually, 1993 Shenandoah is essentially a great-looking Amiga game. The models are detailed and animated, the special effects are dramatic, and there are lots of thoughtful little details. On your approach to the game's first world, the mineral planet Dennax, keep an eye out for a red nebula that takes the shape of a giant dragon. The game boasts a bunch of great tunes as well, including the synth-pop title song and the woodwind-heavy theme for the forest planet Geneibo. The only flaw: some audio glitches during the ship customization phase.

Had 1993 Shenandoah arrived on Amiga on time, it would have launched while SNES was in the middle of its life cycle. Instead it makes its debut four generations later on Nintendo's first ever hybrid console. The game provides closure for a title 27 years in the making and represents yet another stout shooter on Switch. While it struggles a bit with slow-moving, overlong levels, its successes in ship customization, world-building, four-player multiplayer, and authentic Amiga production values win out. The dream of the 90s is alive in 1993 Shenandoah.

This review is based on a digital copy of 1993 Shenandoah for the NS, provided by the publisher.