Bloodstained: Curse of the Moon 2 (NS)

Bloodstained: Curse of the Moon 2 (NS)

With Castlevania in mothballs in Konami's metaphorical attic, it's up to other developers to deliver the side-scrolling gameplay, tense action-platforming, and gothic ambiance for which the franchise is known. Enter indie studio Inti Creates, whose Bloodstained: Curse of the Moon 2 is both a significant improvement on its already solid Curse of the Moon and a title that can stand against the best of the early Castlevania series.

Curse of the Moon 2 once again follows the lone, cursed swordsman Zangetsu. The demon tower has reappeared and evil creatures infest the mortal realm. To destroy the demonic threat once and for all, Zangetsu partners with Dominique, a representative of the church, plus several other unlikely allies. 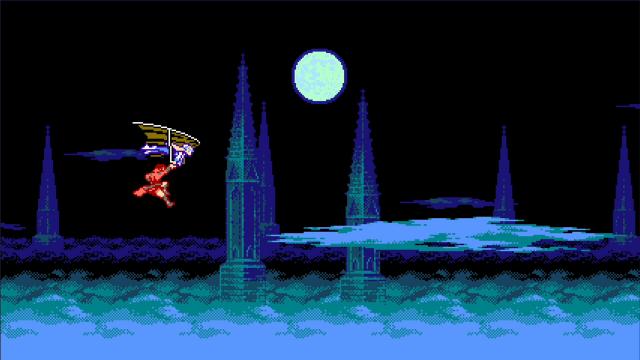 If you've played a Castlevania game from the NES and SNES eras, or the premier Curse of the Moon, you know what to expect here. Zangetsu and company move through eight side-scrolling levels, leaping across platforms, fighting monsters and demons, expending weapon points in order to deploy powerful sub-weapons, and facing off against several end-stage bosses. You'll also take several branching paths and shortcuts and experiment with multiple playable characters, as you do in Castlevania III, the game closest in spirit to the Curse of the Moon series.

However, where Curse of the Moon conformed almost slavishly to the Castlevania III template, and thus failed for forge its own identity, its sequel bursts out of the 8-bit formula for the better. Curse of the Moon 2 is a weirder, wilder take on the house that Belmont built, with atypical characters, a huge roster of companions, and an episodic format that grants the experience greater replay value. 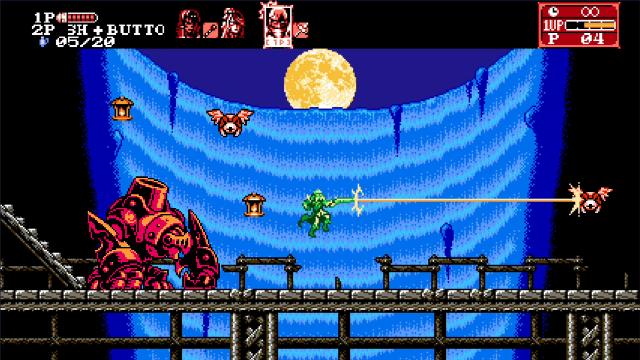 Those unusual characters include the aforementioned Dominique, who spars with a spear and summons a powerful one-use sub-weapon that replenishes health and brings companions back from the dead; Robert, an embittered marksman who distrusts the church and alchemy; and Hachi, a Welsh corgi that operates a giant mech suit — yes, you read that right. All have their places and uses in the game. Robert, for example, is helpful at picking off targets from a distance and sneaking under low hangings. Hachi, meanwhile, exercises the full might of its suit to demolish barriers and access secret paths. Dominique, who is unfortunately absent for much of the game's second episode, has a higher, floatier jump, and a far-reaching vertical attack that is incredibly useful in the final boss encounter.

Speaking of episodes, Curse of the Moon 2 has three, unlocked in order (alongside two other unlockable secret modes). The first follows Zangetsu as he meets and recruits Dominique, Robert, and Hachi, and runs through the game's eight levels for the first time. The second episode finds players with a smaller roster as they proceed once again through all eight levels, this time taking shortcuts that reveal new areas and fighting familiar bosses with new attack patterns. 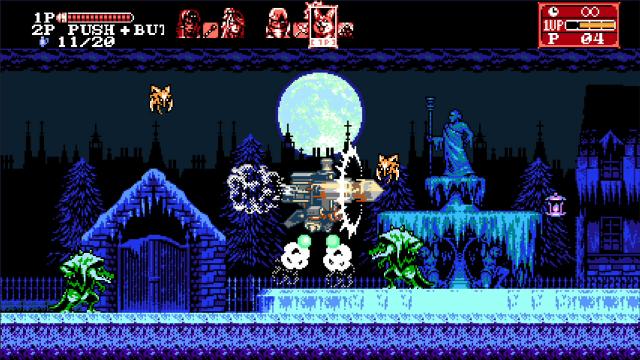 The third and by far the boldest episode introduces the squad of playable characters from the first Curse of the Moon, and asks players to retread old ground to collect companions and resources for a trip into uncharted territory. Without spoiling too much, this segment pushes the Castlevania format into new and exciting places, mechanically, geographically, and thematically. Kudos to Inti Creates and narrative supervisor Koji Igarashi for dreaming big in episode three.

While the three-episode template is a clever way to get more mileage out of the same seven or eight levels, a feeling of repetition inevitably sets in. You'll be visiting and revisiting many of the same locales and fighting the same baddies again and again. Inti Creates mitigates the tedium with branching paths and harder-hitting bosses, but doesn't erase it altogether. 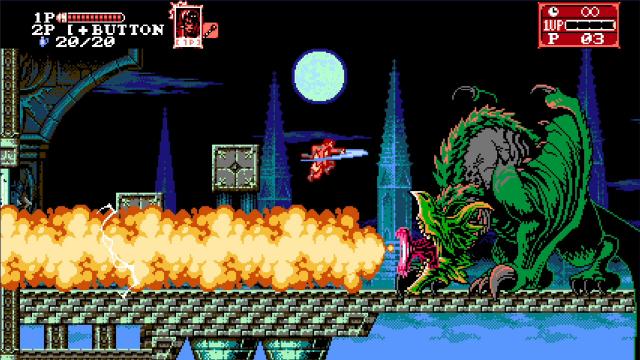 Even without the multiple-scenario structure, you'd probably play through many of the same sections over and over simply because they're so taxing. Inti Creates doesn't shy away from the steep level of difficulty that made the early Castlevania titles famous (or infamous), with plenty of death-defying leaps over bottomless chasms, powerful monsters that attack from all angles, lots of untimely enemy knock-back, and limited lives. Beating this game on "veteran" difficulty is a tall task indeed. Luckily, the game offers a "casual mode" that grants infinite lives and disables knock-back.

It also offers simultaneous two-player local co-op, a rare treat for a game like this. Players can swap to their favorite character, à la Trine, and tackle each stage's gauntlet as a team. There's even a feature that allows co-op partners to turn their characters into a bubble in order to sit out an especially challenging platform section or fight, in the style of New Super Mario Bros. 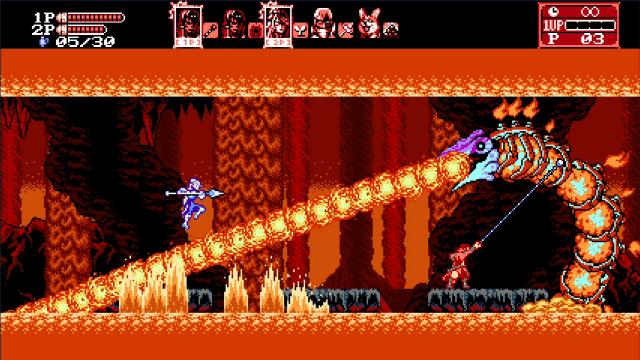 In terms of art and sound, Curse of the Moon represents a natural progression from the first installment. The pixelated graphics and chiptune music do a fine job at transporting players back to the early days of the Castlevania franchise. It's a sweet trip down memory lane.

Worry not that Konami shows no interest in authorizing a new Castlevania game, for Inti Creates has picked up the slack. The studio's latest throwback title is a great action-platformer, with seven playable characters, high replay value, tense side-scrolling gameplay, and nostalgic graphics and music. Its repetitive structure and steep difficulty notwithstanding, Curse of the Moon is a worthy spiritual successor to the moribund Castlevania series.

This review is based on a digital copy of Bloodstained: Curse of the Moon 2 for the NS, provided by the publisher.