For shoot-em-up fans, Darius is a legendary name. Consequently, the international release of Darius Cozmic Collection — a collection of arcade and home console installments of the franchise available previously only in Japan — is reason to celebrate. The Cozmic Collection is split into two parts, with Arcade covering Darius, Darius II, and Darius Gaiden, and Console hosting titles that appeared on Sega Master System, Genesis, PC Engine, and SNES. The goal of this review is to cover the Arcade version, the superior of the two. 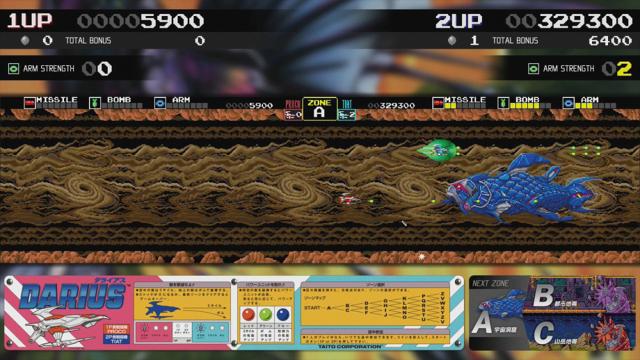 That's four arcade shooters for $44.99 — a steep price no matter how you slice it. However, considering the care and attention that went into this package, the greatness of the games, and the fact that a used Saturn copy of Darius Gaiden costs roughly $80 on the second-hand market, it's not extravagant.

Developed by studio M2, which has earned a reputation as one of the best in the business at preserving, recreating, and elevating retro games, the Arcade collection enjoys both perfect emulation and a plethora of quality of life features — some of which go above and beyond what is required in an arcade game compilation. Each title supports save states, replays, online leaderboards, multiple difficulty levels, options for lives and continues, and fully mappable buttons for player one and player two. Also supported: several display types (e.g. pixel perfect, fullscreen), smoothing, scanlines, and backgrounds. All titles even feature a recreation of the original arcade "body sonic" technology — special speakers installed beneath the player bench — via HD rumble. 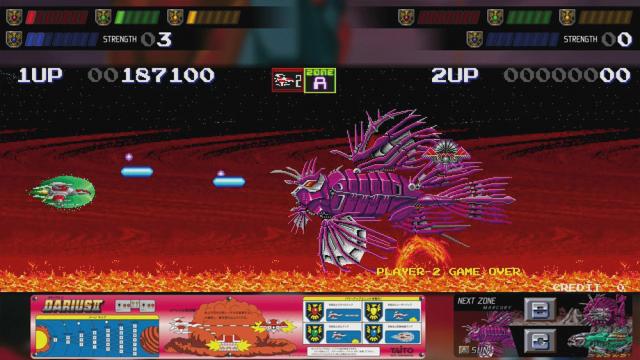 The best and most unexpected feature is Training Mode, which allows players to practice each game at their leisure. You can select starting zone, starting difficulty, and power levels for shot, bomb, and arm. This is an enormous gift for Darius followers and arcade fans in general. Now you can replay your favorite stages or rehearse your strategy against an especially demanding boss (here's looking at you Titanic Lance).

All these bonuses and special features would be somewhat pointless without great games to back them up. Luckily, every title in the anthology is worthwhile (and supports simultaneous two-player local co-op). Darius, the first game in the series, is a rock-solid shooter that benefits from its unique three-monitor set-up, sea creature bosses, and branching paths — even if the game's models are tiny in Switch portable mode due to its widescreen formatting. Darius II is a significant step forward for the series. It ditches the premier game's irksome checkpoint system, introduces more powerful weapons, and allows players to change the orientation of the Silver Hawk left or right during boss fights. 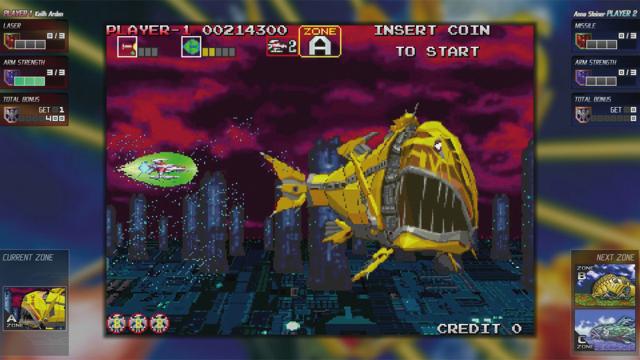 Then there's Darius Gaiden, Darius III in all but name. It's a shoot-em-up tour de force. Aesthetically, it's a masterpiece, thanks to semi-transparent effects, parallax scrolling, huge articulated bosses, and psychedelic visuals. Mechanically, it builds upon the foundation of Darius II, introducing a screen-clearing black hole bomb and the ability to capture mid-stage bosses who then attack enemies on your behalf. Finally, the dreamlike soundtrack by Taito band Zuntata is one of the most haunting and atmospheric of the 90s arcade scene. The Arcade anthology is worth it for Gaiden alone.

While the collection features the first three mainline Darius titles, it's sadly missing G-Darius, the fourth game that debuted in arcades in 1997. The inclusion of G-Darius, the first shooter in the franchise to employ three-dimensional polygons, would have elevated this compilation even higher.

That omission notwithstanding, M2 has done justice to Taito's extraordinary shooting series with Darius Cozmic Collection Arcade. The studio has preserved several arcade classics and made them more accessible and customizable than ever before. Moreover, the games themselves are good, great, or, in the case of Darius Gaiden, exceptional. Darius fans, rejoice: the Silver Hawk has come home.