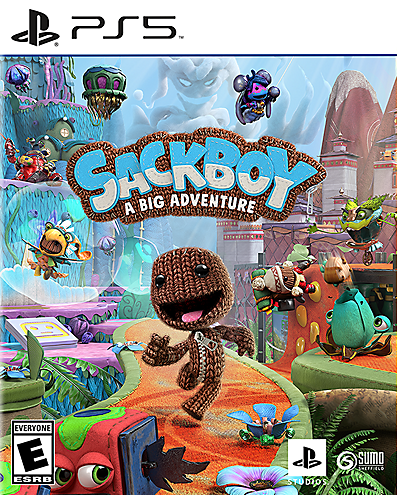 Sackboy turns in a solid performance, but treads over ground that has clearly been walked on by others.

Sackboy is Sony's working man. Ever since the release of LittleBigPlanet on PlayStation 3, he has been fighting the good fight across multiple systems and generations, yet has never quite received the credit he deserves. Like that professional wrestler trying to 'get over' with fans, or that supporting actor who you see everywhere (but can't quite name), Sackboy's work has long been unappreciated, but always valuable. He had put in his time, and all he had to do was wait for the day when it would truly be recognized.

Then Astro Bot came along and ruined everything.

With a fat, cherubic body, cute feet-lasers, and non-gender specific designation, it didn't take long for Astro to win over a new generation of fans. Sony was quick to recognize this development, giving its new potential mascot the honor of being the pack-in game for both PSVR and PlayStation 5. It would seem that a pair of happy eyes and a friendly wave are all it takes to make everyone forget about over a decade's worth of dedication. 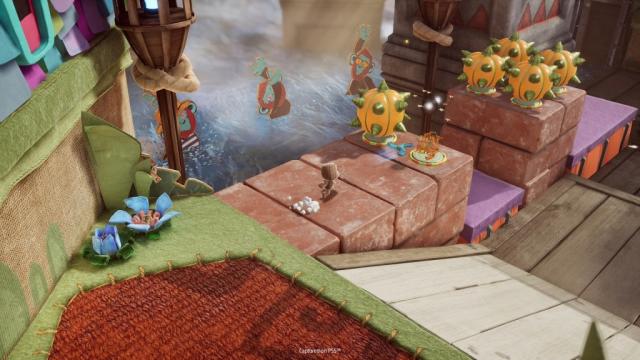 Thankfully, Sackboy isn't ready for his walking papers quite yet, and with A Big Adventure easily turns in a great performance. Just be aware that many of the answers he comes up with originated from somebody else's test.

A malicious entity known has Vex has invaded Craftworld, enslaving its population and forcing them to build his Topsy Turver, a device that threatens to turn the land of imagination into one of nightmares. Taken under wing by Scarlet, the last of the Knitted Knights, Sackboy must ascend to this legendary status if he is to become the chosen one destined to save Craftworld.

The story is simplistic and easy to follow, as it should be. Like much of ABA, it won't be winning any points for originality (the imagery of enthralled Sackfolk was clearly inspired by Fellowship of the Ring), but it serves its purpose simply by being there. It gives Sackboy and the game more of a focus than what came before, and this trickles down into the gameplay for the better. 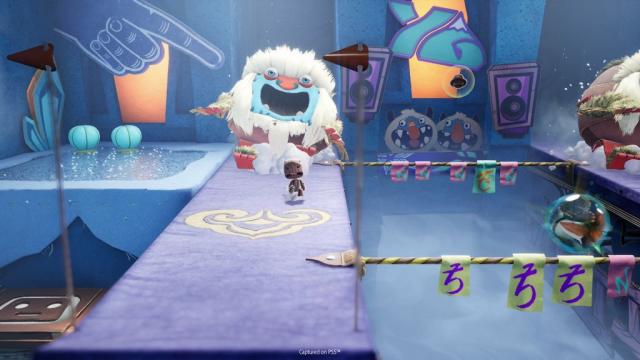 ABA's new coat of paint is nowhere near as fresh as it first appears. Veterans of the eighth generation will have little trouble identifying where most of the game came from. Its entire structure and overall design is derived from Super Mario 3D World. From the simultaneous, (up to) 4-player gameplay, to the world layout, right down to the change in perspective, much is copied from the Wii U title. Even the game's gated progress of requiring a specific amount of Stars to move forward is replicated by Dreamer Orbs. The music levels, as well as the grading system are derived from Rayman Legends all the way down to its visuals, and to say that buying costumes at Zom-Zom's is reminiscent of Super Mario Odyssey is an understatement.

It's impossible to say that ABA is 'inspired' by these games, when it not only steals their ideas, but does it so blatantly. Sumo Digital seems shameless and unapologetic in doing this, which only further amplifies the fact that the lack of originality is by far the worst aspect of ABA. Sackboy was certainly in need of more direction than what the Imagisphere was providing, but simply copying what worked for others in the past feels off- especially for a series that previously championed creativity.

Lifting so much from these games does come with one benefit: it allows Sumo Digital to focus its attention almost solely on the level design- and it shows. Not only is ABA fun to play from start to finish, it proves that other developers are starting to learn some of the lessons that Nintendo has forgotten. 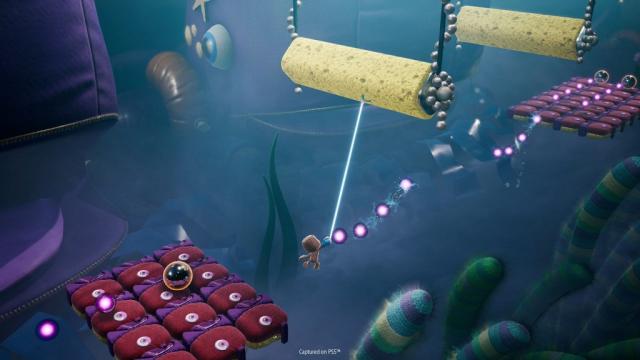 ABA does a wonderful job of introducing abilities for players to utilize, but keeps their appearances fleeting enough to remain fresh throughout the game. The Clawstring seemingly provides an atypical layer to level navigation, which feels even more novel using the DualSense controller. A cocktail umbrella serves as both a sword and traversal tool, briefly making Sackboy feel like the Knitted Knight he aspires to become. The Plasma Pumps allow for a limited hovering ability (inviting further comparisons to Astro), and also give players a Mega Man-esque Buster Cannon. The Whirltool is the only mixed bag of the bunch. While invaluable during combat, its use in various platforming sections is suspect at best, requiring guesswork during crucial do or die moments. Faith-based gameplay is the last thing anyone wants in a platformer, and to see it survive into the ninth generation is cause to lose hope.

Overall, the powerups do a great job of making the player feel stronger, while adding more to the game than just weaponry. When you're wishing Sackboy could keep them all, they're working. 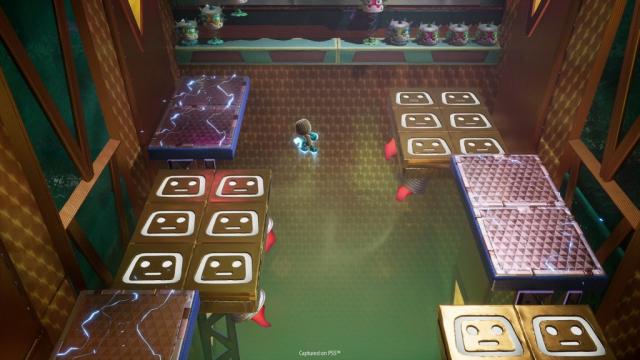 The Knitted Knights Trials are a dead ringer for the timed challenges from Rayman Legends. Hidden within certain levels, each of these missions has three levels of ranking, based on how fast they're completed. Earning Gold Trophies is no easy feat; players must utilize Sackboy's more nuanced movement options, if they wish to earn their renown. Successfully completing these trials will build up the skill required to tackle ABA's post-game section, where it will be truly tested.

Another 'holdover' from Legends is the addition of licensed-music themed levels. While not nearly as intense (or frustrating) as what Ubisoft offered last generation, they'll no doubt bring a smile to the faces of those who enjoyed slapping enemies to the beat of “Black Betty” or “Eye of the Tiger”. The incongruity of David Bowie showing up with Sackboy is only outmatched by the fact that they brought Britney Spears along with them. 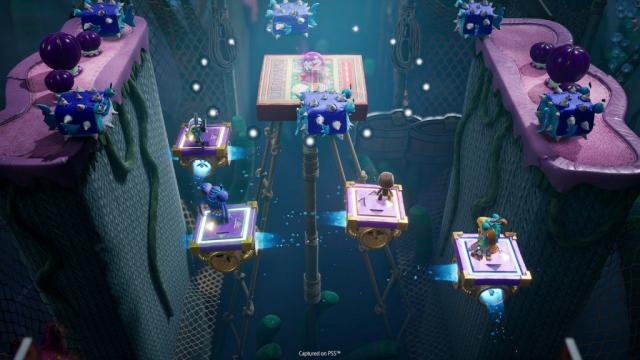 The biggest highlight of ABA is without question the Team Levels. Used sparingly throughout the adventure, these emphasize players working together to complete the level in a way that should make other developers take notice. These days, multiplayer in platforming games is either in or out, or when it's in, it's starting to feel like an afterthought. Yoshi's Woolly World had one of the weakest multiplayer modes I've played in any generation, and with the exception of 3D World, the multiplayer found in mainline Mario titles of the past few eras has been lacking. To see Sumo Digital actually one-up Nintendo in this regard is not only impressive, it should be serve as a wake-up call to developers. Multiplayer functionality in platforming games used to be the standard, and it's time for it to be so once more.

The only problem is the lack of online multiplayer at launch. The cross-generational gap between PlayStation 4 and 5 is the likely culprit behind this, and once the bridge has been constructed connecting the two together, it'll no doubt be fun to traverse across. Although that's of little comfort to those lacking in friends nearby or additional controllers. This wouldn't have been so bad, if the mode hadn't been advertised so heavily beforehand. It also doesn't help that the game takes every opportunity to remind players about trying the online mode, further rubbing their faces in the fact it isn't there. 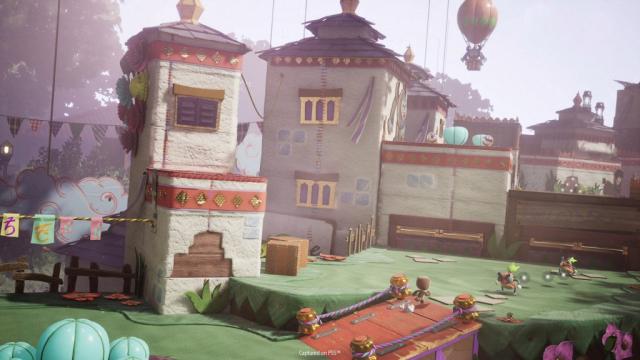 Sackboy has been paying his dues at the Sony Club long enough to deserve a payout, and it may have finally arrived. What the game lacks in originality, it more than makes up for with a journeymen level of design that rarely feels unfair and always feels fun. The Co-op is a breath of fresh air, exposing the lip service some developers have been giving the mode over the years. A properly designed sequel could easily end up among PlayStation 5's greatest titles. Sumo Digital has provided a strong foundation to build upon, continuing to enhance Sony's game portfolio in one of its weakest categories.

His time to become PlayStation's official mascot may finally be over, but A Big Adventure is out to prove that Sackboy's best days could still be ahead of him.

This review is based on a retail copy of Sackboy: A Big Adventure for the PS5