It's been nine years since the Rock of Ages series made its debut, but there's still nothing quite like it on the market. A combination of tower defense and racing, wrapped up in anachronistic packaging, it's one of the more unique video game properties you'll find. The latest installment is Make & Break, which embraces the franchise's fusion of genres and tongue-in-cheek storytelling and adds to the formula a new level creator. While its Story Mode pales in comparison to that of its predecessor Bigger & Boulder, the amount of content and replay value on display is impressive.

Like previous games in the franchise, Make & Break pokes fun at several historical and mythological personalities. The game starts in the middle of The Odyssey, with Odysseus and crew running afoul of the gigantic cyclops Polyphemus. After his defeat, the giant seeks his father Poseidon, who curses Odysseus' ship to wander through time, from the dawn of man to the "age of wonder". 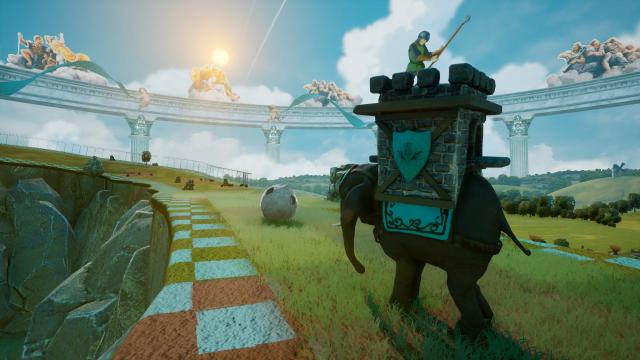 It's a strong setup and provides plenty of pretext for a Greek crew circa 1100 BCE to tangle with Julius Caesar, Genghis Khan, and Elizabeth I. Unfortunately, so much of the humor present in Bigger & Boulder is lost here. Where that game was consistently hilarious, Make & Break struggles to elicit more than a few chuckles. It's not for lack of trying. The scribes at developer ACE are clearly going for laughs, but many of the jokes fall flat. It hurts too that previous franchise titles already used up so many legendary characters. The roster of NPCs here, by comparison, seems more like history's B-side.

If the narrative in Make & Break struggles to keep up, the game's art direction is as great as ever. It features a mixture of moving cutouts from antique paintings, in the style of Terry Gilliam, alongside 3D models and backgrounds that look torn literally from the pages of history. One of the title's greatest visual assets is its dreamlike overworld, a placid, mirror-like sea suspended in space, surrounded by stars and constellations. 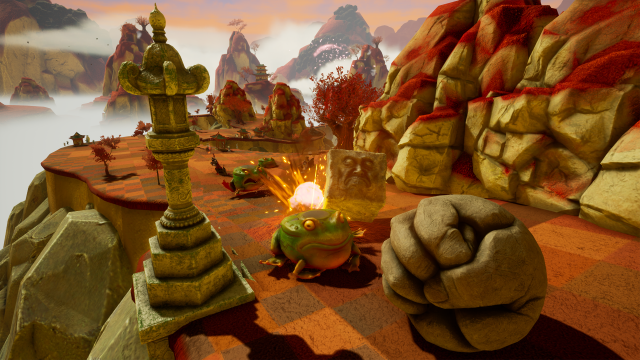 From the overworld, you'll access several nodes, each containing a historical or fictional figure, who acts as antagonist, and four to five game types. The main game for each node is "War", which pits you against your rival in the standard Rock of Ages scenario: one phase for real-time tower defense and one phase for rolling your boulder through the opponent's gauntlet. The tower defense phase features a bird's eye view of the map, where you'll place multiple defensive and offensive fixtures intended to slow and/or destroy the antagonist's boulder. Once your own boulder is ready — it's chiseled from stone in the background while you design your gauntlet — the camera switches to a third person perspective and you'll roll toward the opposing castle. Whoever destroys the other's castle first wins.

As always, this two-phase structure is a gratifying mix of strategic thinking and reflex-based racing. If you happen to lean toward one phase over the other, you're free to try several other game types. These include "Obstacle Course", where you race the AI in a track littered with hazards; "Avalanche", which asks you to stop a barrage of enemy boulders from reaching the gates of your castle; "Skee Boulder", an oversized game of Skee-Ball; "Unit Challenge", a variant of War in which you and your rival can deploy only one or two specific defensive fixtures; and "Time Trial", a timed race connected to online leaderboards. All are available solo or with two players via split-screen multiplayer. 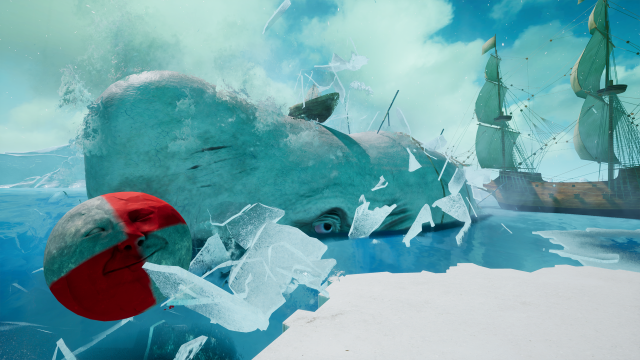 With fourteen nodes, each with four or five games apiece, Make & Break enjoys a substantial campaign. It's also highly replayable, as players can revisit each game to earn stars, used to unlock additional weapons and stages. You'll need to spend hours to collect the 90 stars necessary to unlock the last node — the sacrilegious Beginning of Time — and the penultimate boss battle.

Speaking of boss battles, they're still a weak point of the series. The game's second boss battle with the Vitruvian Man is especially disappointing. While ingenious — it cleverly riffs on 2D fighting in general and Mortal Kombat in particular — it's ultimately an ungainly, unsatisfying encounter. The best of the lot is a final secret battle unlocked after besting all three main bosses. It ditches some of the elaborate rules of previous fights and settles for a simple three-lap race. If there is to be a Rock of Ages IV, it should embrace boss races, in the vein of Diddy Kong Racing.

Outside of the aforementioned game types and boss battles, Make & Break features five "Humpty Dumpty" levels, devilish platforming trials that will push your dexterity and focus to their limits. Creative, thoughtful, and challenging even for veteran players, these are probably the best stages of the game. 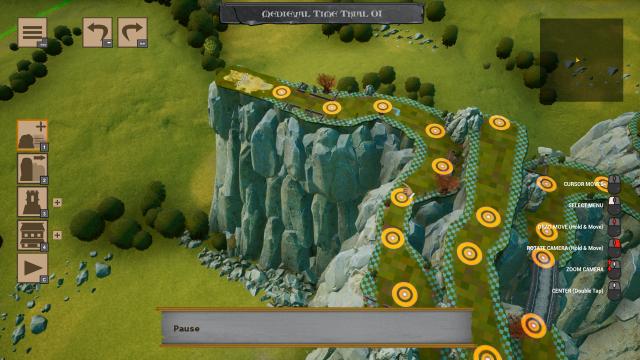 As you can see, story mode in Make & Break is sizable, but it's only part of the equation. The other component is a map maker, which allows ambitious players to craft their own courses and share them online. While the actual map editor is a little clumsy, it opens up every game type, stage background, and prop from the main campaign to would-be architects. In addition to uploading your own tracks online, you can play other designs from around the world, against the AI or human players. As you'd expect, some designs are straightforward, some are silly, some are designed to be as difficult as humanly possible.

Across all modes, Make & Break functions well for the most part, but on Switch there are a handful of technical hiccups. I experienced a few instances of slowdown, an audio glitch in the final boss intro, and a couple of freezes and crashes. If you're playing in portable mode, expect lower resolution and tiny hard-to-read print.

Rock of Ages remains one of the weirder properties in the video game industry, with mechanics, characters, and premises that seemingly don't belong together. Yet ACE Team and co-collaborator Giant Monkey Robot have made it work once again with Make & Break. While the series is starting to grow long in the tooth — running low on laughs and short on captivating historical personalities — it can fall back on solid mechanics, a substantial campaign, and, now, the freedom to design and share homemade maps.

This review is based on a digital copy of Rock of Ages 3: Make & Break for the NS, provided by the publisher.