Island Saver is not a good game but, considering its raison d'être, it could be worse. The product of a partnership between Scottish developer Stormcloud games and UK financial institution National Westminster Bank, it's a free-to-play educational game that touches on themes of environmentalism and money management. While its financial and environmental advice is unsubtle and slightly self-righteous, it's fundamentally helpful and practical. The bigger problem is the title's gameplay loop, which is buried by backtracking and busy work. In the end, Island Saver is about as fun as balancing your checkbook.

The story in Island Saver is slight, for the most part. Three islands lay covered in trash and oily goop, which are damaging plants and scaring away local fauna. As a Bionaut, AKA a climate crusader, you must use your trusty Trash Blaster to suck up all the plastic, metal, and glass waste that litters the beaches, forests, tundra, and volcanic areas of the Savvy Islands and breathe new life into its plants and animals — or Bankimals, as they're called in this NatWest-subsidized production. 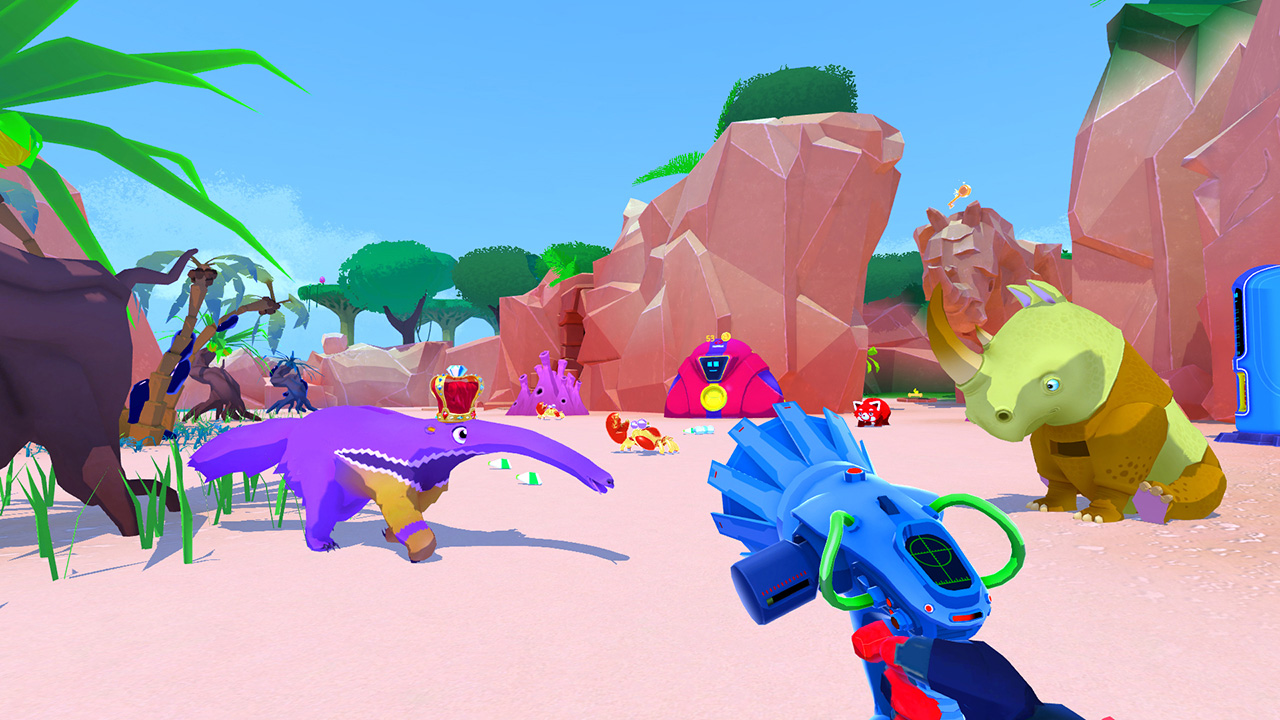 Island Saver plays like a mixture of Slime Rancher, Viva Pinata, and an N64-era 3D platformer. It borrows the first-person perspective and suction gun from Slime Rancher, the animal ecosystem from Viva Pinata, and level geometry from titles like Banjo-Kazooie and Donkey Kong 64. While these ideas and templates lead to some fun interactions — blasting sludge off a tree, meeting a new animal type, and following a secret path to reach a hidden "nest egg" — they're not fully fleshed out. Regrettably, the entertaining stuff falls under the shadow of tedious recycling and accounting.

Here's how it works. You'll touch down on one of three islands — Sandy Island, Icecap Island, or Eruption Island — all covered in trash and goop. Using the Trash Blaster, which both inhales and expels objects, you'll suck up any loose plastic bottles and metal cans and deposit them in a recycling container. You'll then collect water and wash all the greasy goop from bushes and trees. As the plants revive they'll sprout fruit, which will attract grayed-out animals. Once the animals have a full stomach of fruit, they'll burst with coins — they are piggy banks, you see — which you can extract and use, along with the funds earned from recycling, to open new areas as well as purchase seeds, Trash Blaster upgrades, and some silly cosmetic items. 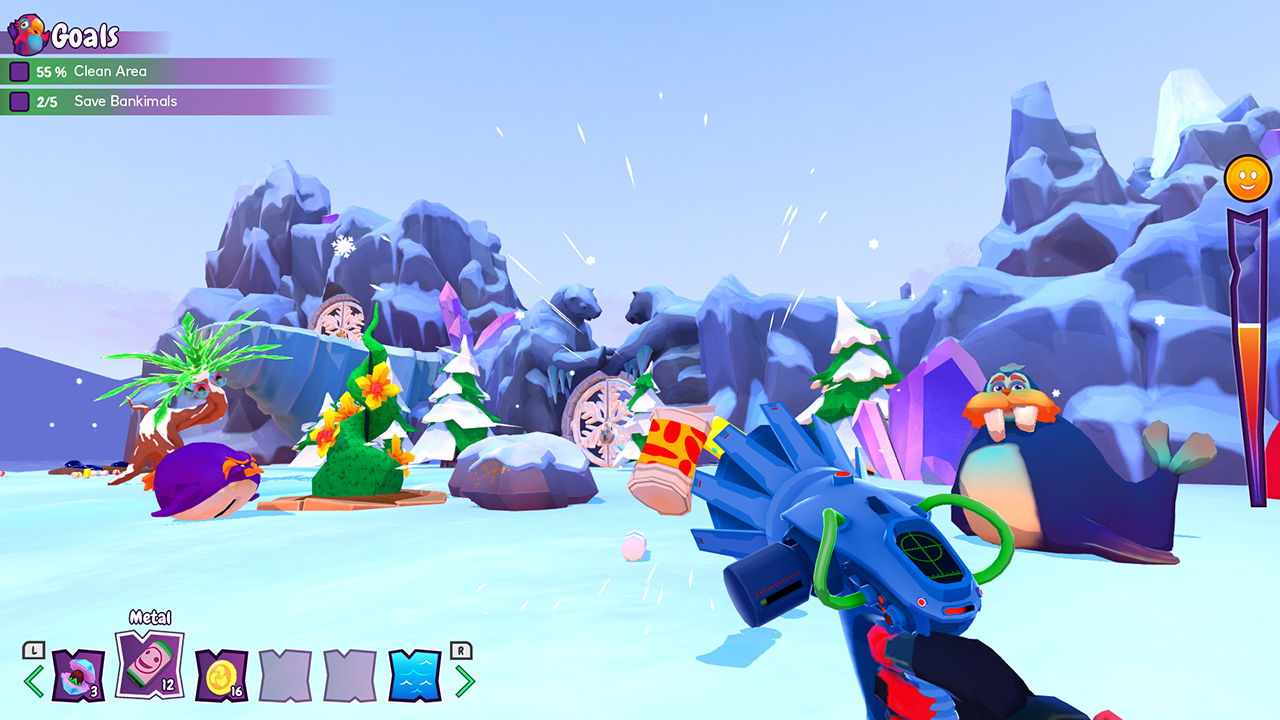 If this was all there was to it, Island Saver would be passable entertainment. Indeed, for a while, it works fine. On Sandy Island in particular there's a breezy simplicity to the action. It's fun and novel to welcome new life forms to the island, a couple of which — so-called apex Bankimals — will allow access to previously gated areas and concealed collectibles. The game feels, at first, like something a C-list Rare might have turned out on N64.

Yet starting with Icecap Island, it begins to fall apart. With more fruits, seeds, and trash types, the game's woefully inadequate inventory system reveals itself. There simply aren't enough slots to work efficiently. You'll need to constantly trek back and forth among kiosks, depositing trash, collecting coins, pulling out tax tokens to process the deposited trash, purchasing and planting seeds, creating fertilizer, etc. Once the game introduces several new types of currency, things become even more unmanageable. You'll have to take any collected Euros or dollars to yet another kiosk — sometimes in another area of the island — to convert it to doubloons so you can put them in the bank. The game seems to recognize this problem and provides an additional slot upgrade for purchase, but only at the tail end of Icecap Island, two-thirds through the game. 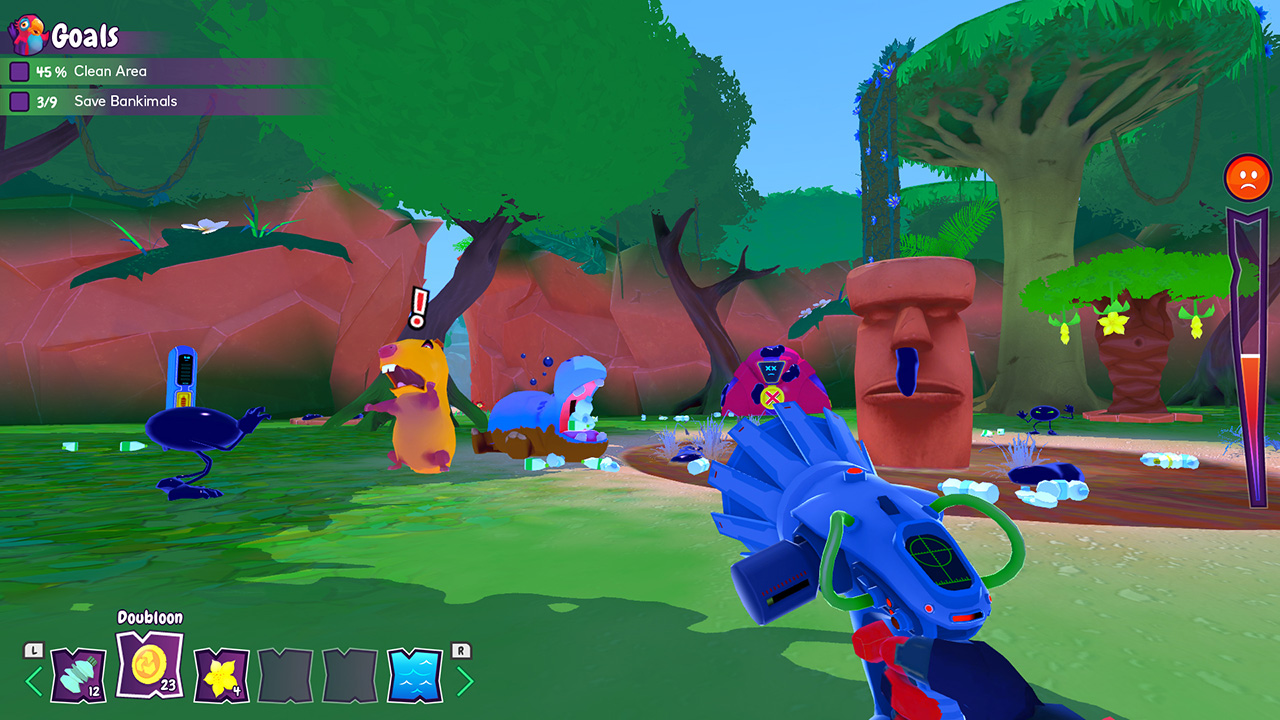 The monetary lessons Island Saver imparts are important, but they shouldn't come at the expense of an enjoyable gaming experience. Surely there are other, less tiresome ways to teach the value of saving money, paying taxes, and repaying a loan on time. At times, Stormcloud highlights financial advice in subtle and clever ways, such as an episode on Icecap when a sleazy shark named Chomper Gold approaches you for a too-good-to-be-true loan. Even the aforementioned nest eggs — 20 of which are spirited away on each island — represent a nuanced way to highlight the importance of investing in the future. Yet the majority of the time the lessons are obvious and literal and drag the production into tedium.

Outside of recycling and maintaining a healthy savings account, Island Saver asks players to do some platforming and fighting. Neither is especially interesting, due to clumsy controls and a lack of real consequences. Jumping in the game is loose and imprecise and aiming is strangely sluggish, even with the sensitivity maxed out. Combat with Litterbugs, oily animated blobs that pop up at scheduled intervals in each map area, is perfunctory at best. They arrive and run around and you dispatch each one with a blast of water from the Trash Blaster. Every now and then a giant Mega Bug will appear and stomp around like a movie monster. With enough water it too will dissolve. Combat, like so much of the game, feels like a chore. 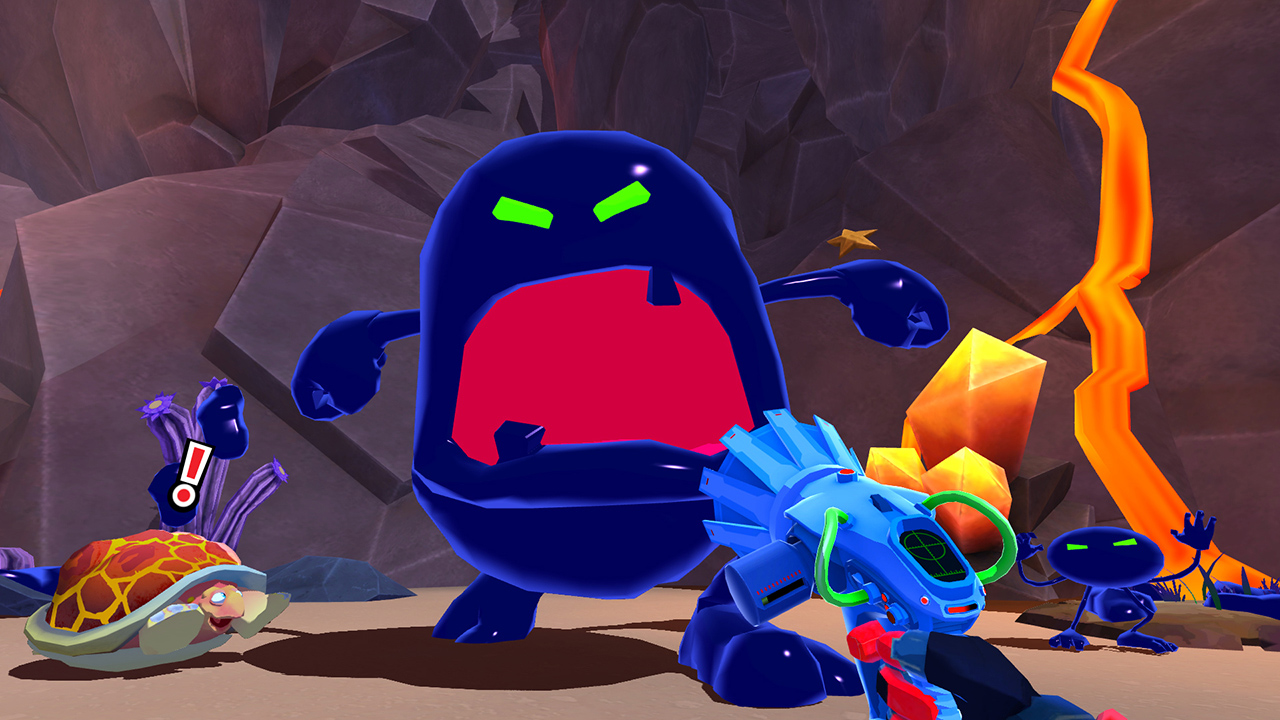 Judged only on technical merits, Island Saver is a meager game, with textures and geometry from the fifth generation. Yet its brightly-colored cartoon animals are attractive and its edible fruits — which resemble various food types like acorns, crickets, and slabs of meat — are adorable.

Considering Island Saver is a free-to-play educational game commissioned by a bank, it's not that bad. Its commentary on environmentalism and fiscal responsibility, if a bit preachy, is ultimately constructive and the ideas it derives from titles like Slime Rancher, Viva Pinata, and a host of fifth-gen 3D platformers are full of potential. Yet the core gameplay loop is tiresome, repetitive, and weighed down by busy work; combat is perfunctory; jumping is floaty; and the entire production feels like a commercial for National Westminster Bank.