We are not amused.

Cat Girl Without Salad: Amuse-Bouche is a clever idea wrapped up in a short, shallow game. Introduced as an April Fool's joke back in 2013, the scrolling shooter launched first on PC via Humble Bundle, followed by a console debut on Switch earlier this month. While the shoot-em-up features creative meta-commentary on video games and some funny characters and dialogue, it's simply too brief, too simple, and too clumsy to justify a recommendation.

The star of Cat Girl is Kebako, a cute, clueless-but-surprisingly-effective intergalactic bounty hunter who travels through space with her faithful companion, Squiddie. The fully-voiced story is bonkers in all the right ways, with sarcastic dialogue, plenty of meta-jokes, and several unlikely, over-the-top villains. It's all aggressively absurd. 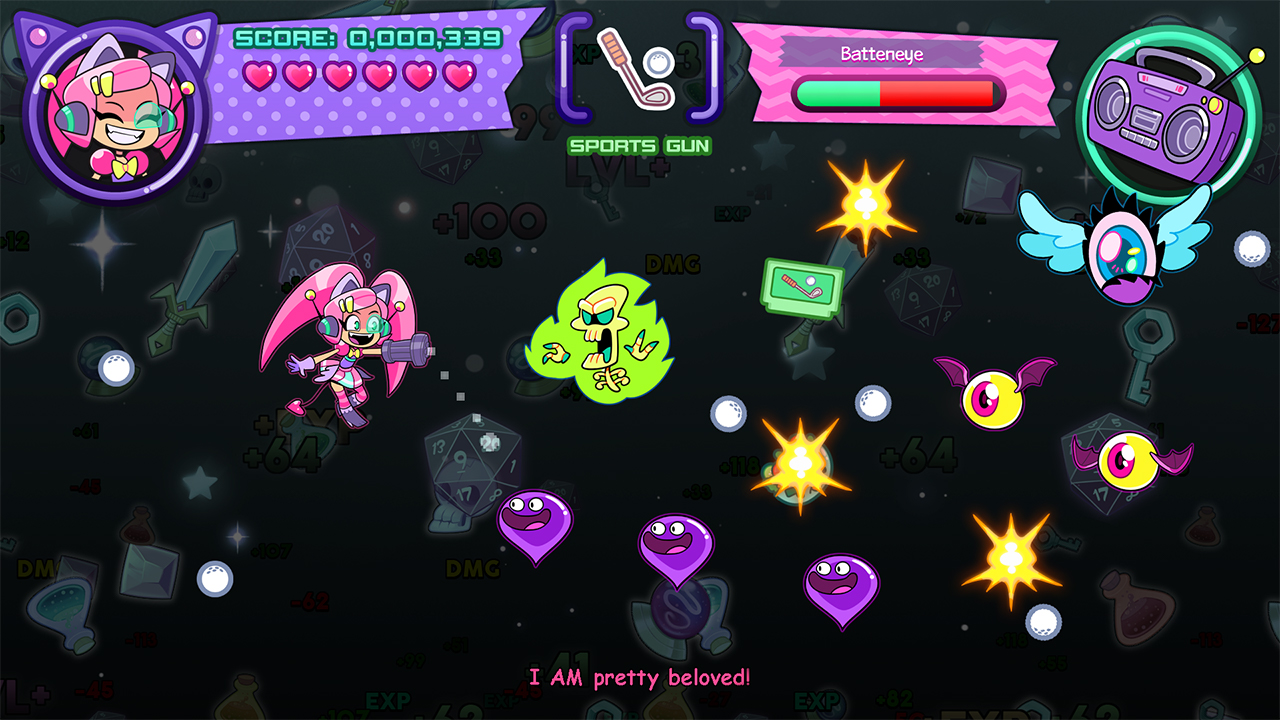 Gameplay is far more conventional—to a degree. This is your standard horizontally-scrolling shooter, with Kebako firing at enemies arriving from the right side of the screen. Each of the game's three levels begins with a gauntlet of floating enemies who fire projectiles and perform melee attacks and culminates in a multi-stage boss battle. If Kebako sustains too many hits it's back to the start—unless you spend accumulated points to continue where you left off.

The game diverges dramatically from the pack, however, with its power-ups. You start with a pea shooter—a literal pea shooter—and upgrade to new weapons by collecting video game cartridges left behind by defeated enemies. Each cartridge grants Kebako a gun designed around a gaming genre. The sports gun allows you to line up a putt and fire a golf ball at the bad guys; the arcade gun deploys a Pac-Man-esque bot that players can direct in cardinal directions using the face buttons; the RPG gun provides a command prompt to attack, perform magic, heal, or run in true turn-based fashion; and so on. 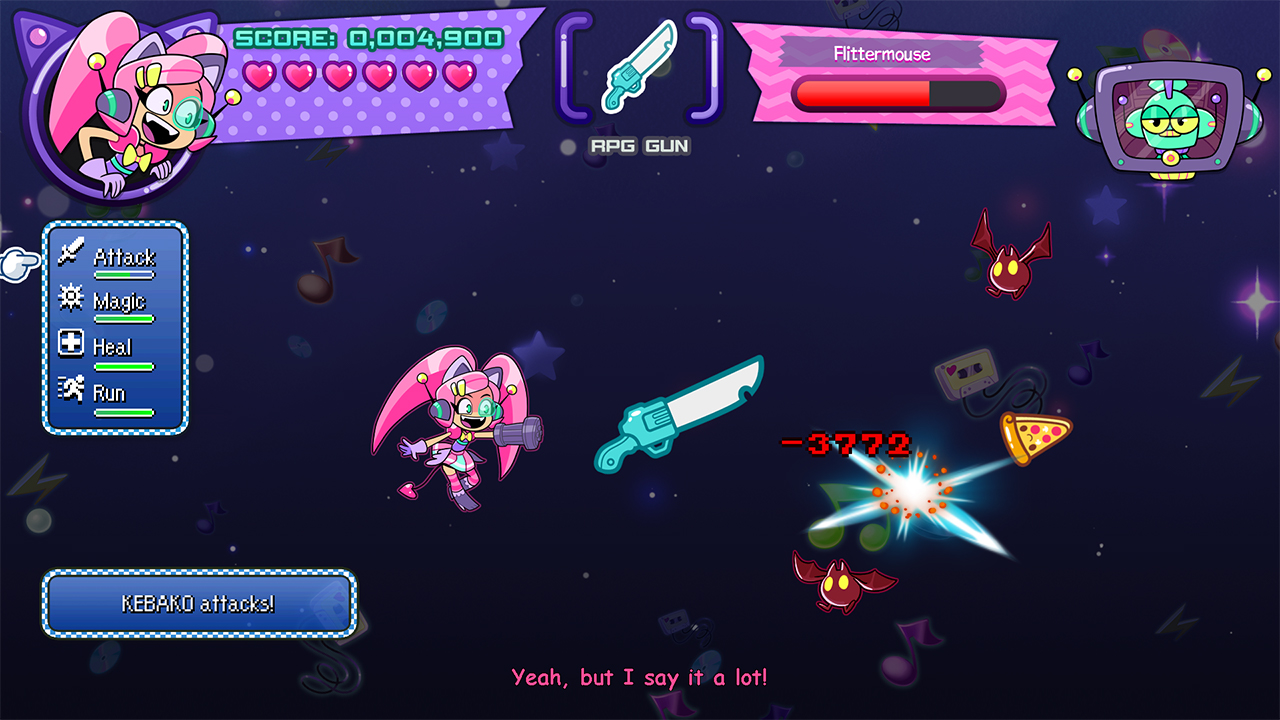 It's a brilliant conceit. Unfortunately, in practice, it's clumsy and unfulfilling. Using some of the weapons in the heat of battle can prove very difficult. The dance gun, inspired by Dance Dance Revolution, asks players to use the face buttons to input directional inputs with the beat of the music, but that requires you to scan the bottom of the screen for commands while keeping an eye on Kebako's movements and incoming fire. Soon enough, you'll be hit and reduced to the pitiful pea shooter. In general, Cat Girl's power-ups, while ingenious, are too slow, distracting, and awkward to be useful in battle for extended periods of time. Conversely, the pea shooter is too anaemic to be effective, and turns boss battles into drawn-out wars of attrition. The good news is that once you complete the game you'll unlock the ability to cycle through all six power-ups at any time.

The bad news: the game will take less than 60 minutes to complete. It sports only three short levels, unfortunately. You could revisit these stages for higher scores, but the straightforward gameplay and generic layouts might turn you back. 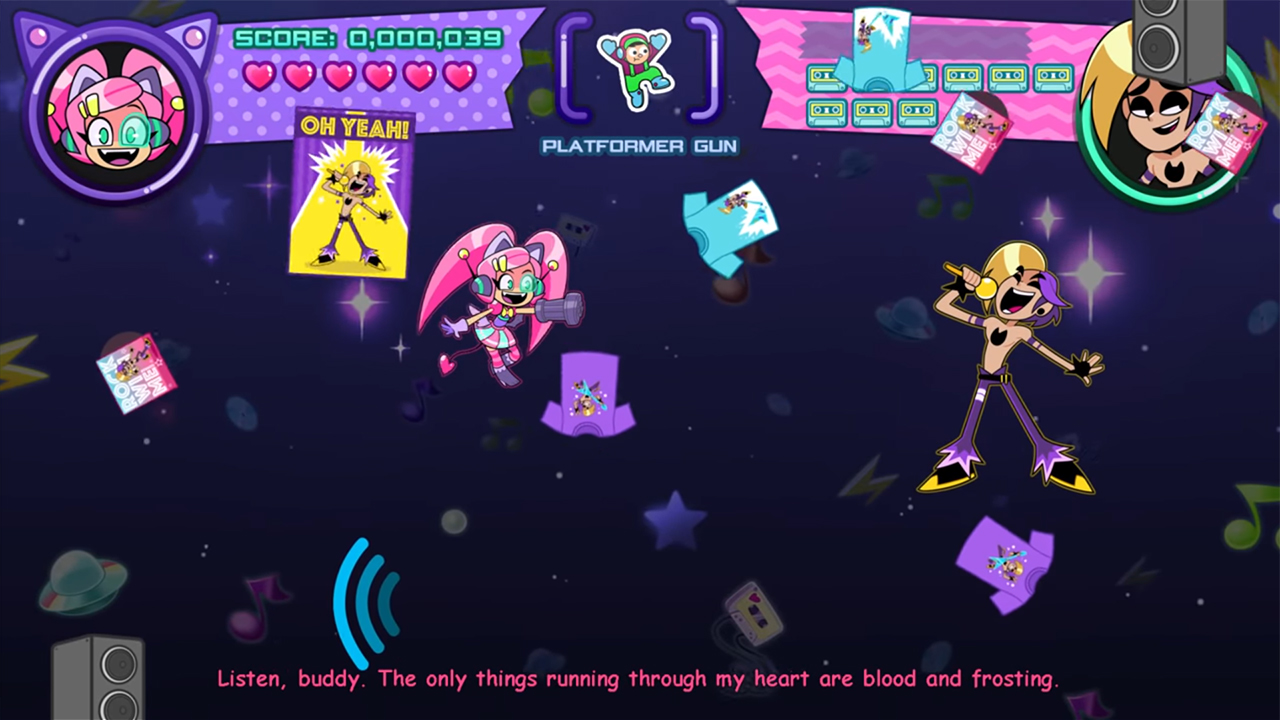 Graphically, Cat Girl achieves a vibrant but simplistic cartoon aesthetic, with several repetitive backgrounds. It's more successful on the audio front, with bouncy tunes courtesy of Jake Kaufman and some energetic voice-over work from Cristina "Vee" Valenzuela and Todd Haberkorn.

Cat Girl Without Salad: Amuse-Bouche began its life as an April Fool's prank, so its inadequacies as a game aren't shocking. Its central premise, whereby the rules and mechanics of different video game genres turn into shoot-em-up weapon upgrades, is downright ingenious, but its simple gameplay, clumsy power-ups, generic levels, and disappointing lack of content make it an overall sub-par shooter.

This review is based on a digital copy of Cat Girl Without Salad: Amuse-Bouche for the NS, provided by the publisher.