Nothing but empty calories.

Have you ever wondered what a food based apocalypse, where the only survivors are children defending themselves with various condiments, would look like? Probably not, but just in case the answer is yes, Deadleaf games has you covered with Nom Nom Apocalypse. What if you’re looking for a new, interesting game to play, however? This review will hopefully give you something to chew on when considering that.

Nom Nom Apocalypse is a top down 2D shooter that is perhaps most similar to something like Enter the Gungeon. Each level sees the player thrown into a myriad of rooms with different enemies that will try to charge or shoot you to death, forcing players to multi-task between aiming at enemies and evading the various dangers. The core gameplay is pretty bog standard for a top down shooter: move around with the WASD keys or the left joystick, and aim with the mouse or the right joystick. Throw in a dodge move and that’s about as complex as the game’s mechanics get. 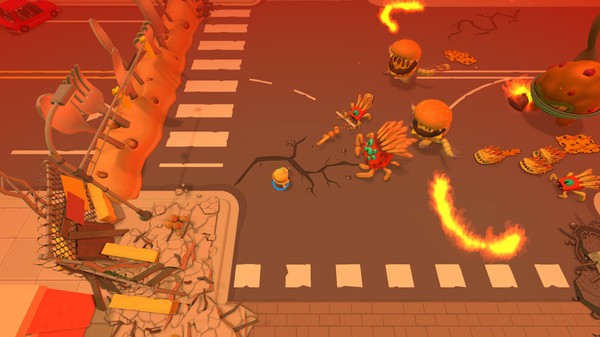 Mini boss and boss fights will show up every so often to add some variety, requiring players to avoid waves of projectiles similar to a bullet hell shooter. As far as gameplay ideas goes, that’s really about all Nom Nom Apocalypse brings to the table. There isn’t much here in the way of innovative gameplay ideas, and, unfortunately, all of these ideas already exist elsewhere, usually with more depth and/or variety.

Another similarity to Gungeon is Nom Nom Apocalypse features a perma death system and roguelike mechanics. Unfortunately, however, these don’t really do anything to elevate the experience. The game does have procedurally generated levels, so dying doesn’t mean you’re just re-treading the exact same ground, but the level design isn’t particularly interesting and always consists of similar looking grey rooms and familiar enemy layouts. As a result, the permadeath system doesn’t wind up improving the game at all, and arguably undermines it, as it became difficult enough to motivate myself to play through the rooms once, let alone go back through an altered iteration of them after dying. 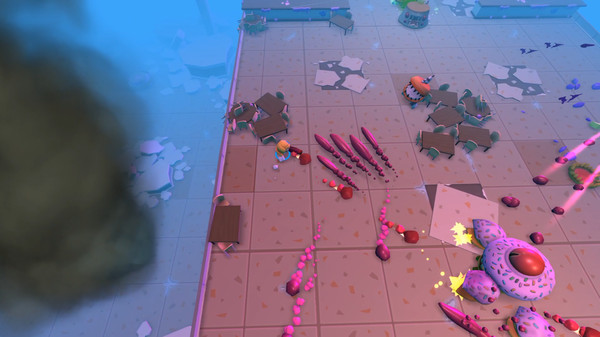 The unique selling point of Nom Nom Apocalypse is likely intended to be its quirky artstyle, which I presume to be the case because every single page that advertises it makes sure to mention that it involves food and an apocalypse. And, really, as far as aesthetic selling points go, that’s about as much of a description as you need. The player character is a child wielding various food based guns, the enemies are primarily based off of fast food items, the game’s world is littered with giant foodstuffs, etc.

Whether this is an attractive art choice or not will obviously vary from person to person, but for me, I found it rather offputting. There’s perhaps an initial charm in watching a child fight off human sized french fry boxes with mouths, but once that wears off everything just looks dirty and unappealing. In much the same way that you’d probably be disgusted if you walked into a kitchen and saw discarded spaghetti or pizza lying on the floor, the mutated food aesthetic just starts to feel gross after a while. To be fair, “gross” isn’t necessarily bad in a video game; horror games, for instance, often use unsettling aesthetics to their advantage. But Nom Nom Apocalypse is trying to combine a cute, quirky art style with a source material that is rather offputting, and it just doesn’t really click. 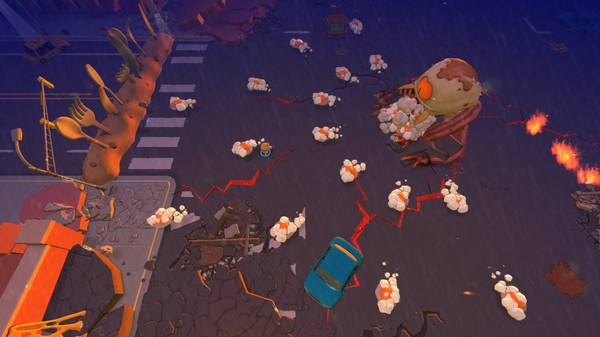 If you’ve skimmed through this review, you may have noticed that it’s rather short, and that’s because there isn’t really that much to say about Nom Nom Apocalypse. Strip away the food based aesthetic and all that’s left is a very simplistic 2D shooter that doesn’t really have any unique ideas of its own to sell itself on. To be entirely fair, there’s nothing that’s truly offensive here; nothing that made me actively hate the experience. Simultaneously, there was nothing that made me feel any excitement or desire to keep playing. For lack of a better word, Nom Nom Apocalypse is simply boring. For all of its supposed quirkiness and odd artstyle, the game can’t hide the fact that it offers very little in the way of depth or interesting gameplay mechanics.

This review is based on a digital copy of Nom Nom Apocalypse for the PC, provided by the publisher.