Even Agnes wouldn't call this unacceptable.

Nearly ten years after the first Bravely Default, the long awaited third (and very sensibly named) entry in the Bravely series is here: Bravely Default 2. After moving on from the continuity and characters in the first two titles, Bravely Default 2 seeks to craft a game that is simultaneously fresh and familiar, taking loved gameplay elements and infusing them into a new storyline and new protagonists. But how well does Square Enix manage to nail the transition to a new world, and is it a worthy pick up? 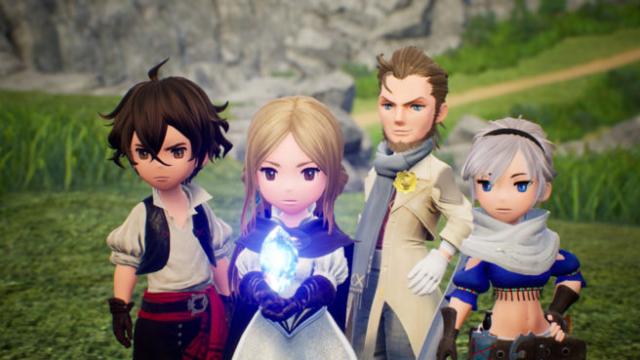 After being shipwrecked due to mysterious forces, a young sailor (name chosen by player) teams up with Elvis, a mage, and Adelle, a traveling mercenary, to help a deposed princess named Gloria recover a series of elemental crystals that are currently wreaking havoc on the land. Through their journey, they have to contend with monsters, superpowered humans wielding powerful stones called asterisks, and a power hungry tyrant with the worst Russian accent in the history of fiction.

Comedy accents aside, the cast of Bravely Default 2 is probably where the biggest improvement from its predecessors can be seen. Whereas Bravely Default and Bravely Second were largely populated by tropey, one note characters, Bravely Default 2’s cast feels much more engaging from the outset. The main cast are all nicely rounded and have character arcs ranging from satisfactory to surprisingly deep. The villains still aren’t particularly engaging and usually don’t develop much beyond openly bragging about how evil they are, but there are a few that have some interesting twists to them and at least pose something vaguely resembling a moral quandary.

The story writing shows signs of improvement as well, avoiding the huge plot holes inherent to Bravely Default or the rather predictable nature of Bravely Second’s fetch quest affair. There’s a much more sincere effort towards worldbuilding and establishing a meaningful backstory, primarily focusing around Gloria and the various crystals. The third chapter, centering around Adelle and the snowy city of Rhimedal, is probably the best bit of writing in a Bravely game so far. 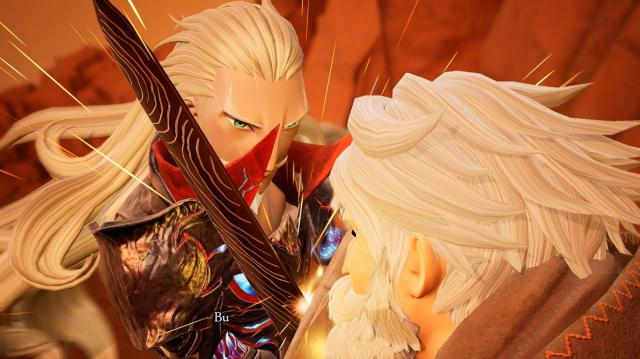 The changes on the gameplay front, conversely, are a bit less obvious. Bravely Default 2 very much takes an “if it isn’t broke, don’t fix it” approach to its core gameplay. Exploration and dungeon crawling are still fairly one note affairs, with players moving around simplistic environments and running into random encounters. One minor change on that end is that instead of running into random encounters every so often based on an adjustable slider, the overworld is now littered with monsters. Monsters will chase the player when they come into view, and combat will be initiated if the player comes into contact with a monster. I’m not a huge fan of this change, personally; giving the player the ability to just decide with the flip of a switch when they want to be picking fights seems smarter to me, but it doesn’t harm things too much.

Combat is still the main selling feature of the Bravely series, heavily focused as it is around the BP system. Instead of being required to act once per turn, players can save up actions for future turns (defaulting), or spend multiple actions at once (braveing). Defaulting builds BP, while acting once gives you a neutral BP output for the turn, and Braveing lowers BP. The catch is that spending enough actions to put you below 0 BP will leave your character defenseless until their BP recovers back. Between this and the job system, there’s a very engaging combat loop that's begging to be experimented with. 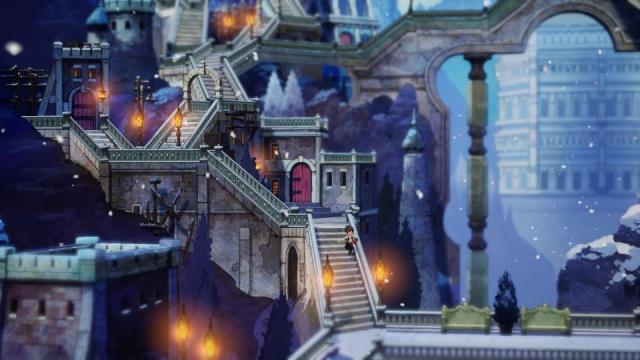 It’s Bravely’s job system that does most of the heavy lifting in terms of keeping combat engaging. Both the Bravely titles and last year’s Yakuza: Like a Dragon demonstrated that giving players greater freedom in designing team composition and strategy is the best way to keep turn-based combat from getting stale, and Bravely Default 2 is no exception here. Along with typical turn-based combat options like attacking and blocking, characters can equip various jobs that allow them to perform specific actions, such as magic attacks or buffs/debuffs.

Building a team with effective synergy between jobs, and then watching your characters go out into the field and mulch enemies, is a lot of fun. This much variety and freedom does bring with it the challenge of balancing, of course, and Bravely Default 2, like its predecessors, is incredibly easy to break with the right combination of jobs and skills. You might find yourself wanting to notch the difficulty up to hard about halfway through the game once you’ve optimized your team. 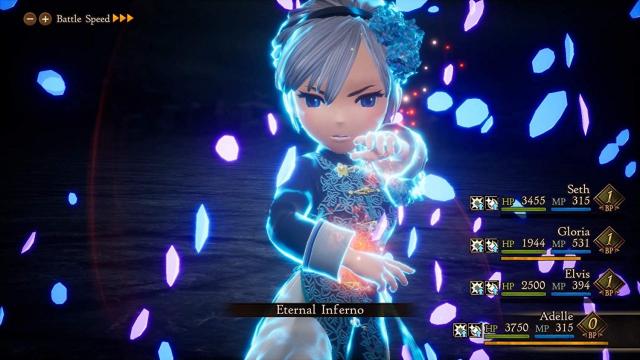 But while experimenting with team layouts is often fun in theory, it can become less fun in practice due to one of Bravely Default 2’s most substantial mechanical changes, which is the introduction of a widespread counter system. A substantial portion of enemies, including all bosses, are capable of countering one or more player actions, be it something as specific as using skills from a specific job, to as broad as countering all magic attacks. The game doesn’t tell you who has what counter until you find out the hard way, so it’s all trial and error. A counter isn’t guaranteed just because an enemy has one, but if it does go off they’ll get a free shot in at your party, and if a boss does this it can be devastating. On top of that, some bosses appear to only activate their counters after reaching a certain health threshold, meaning you can get walloped very quickly for doing something that was safe before that point.

Fortunately, the game’s job system does help mitigate this to some extent, as there are some mid to late game jobs that can ignore counters for certain move types, and you can always change jobs in between attempts at a boss if you find that your team set-up is just completely invalidated by them. But this system shouldn’t be so prevalent that players have to desperately grind a couple of classes just to avoid it. I can almost admire the intention, trying to force players to play more strategically instead of sticking to a single strategy for the whole game, but the issue is that this doesn’t encourage thinking; it just limits the player’s options. Either the player still defeats the boss with a handicapped team, or they lose, then change their party up to avoid whatever it is that gets countered, and go through the entire fight again. If it was possible to switch jobs or something mid-fight it might’ve made for an interesting mechanic, but that would probably break the game even harder. 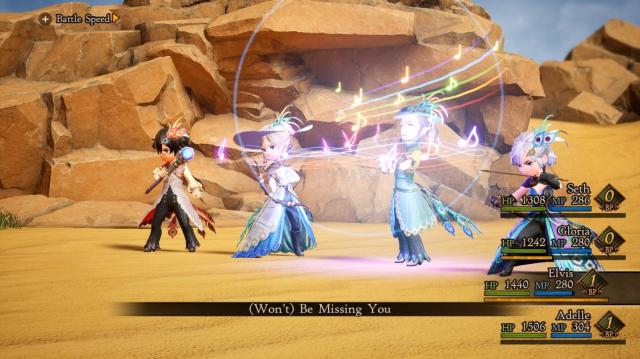 Even with the counter misstep the combat is still fun to engage with, and I can forgive some of the aggravation that came with having to let my black mage sit there twiddling his thumbs when another boss showed up with a lovely “counters all offensive magic” skill. There’s a solid variety of enemies to match up against and, once you progress far enough to build up a team that can mitigate counters to some extent, things open up a lot more. Combining that with the improved writing means that Bravely Default 2 is still a good experience, with a solid gameplay loop that JRPG fans can sink their teeth into and enjoy.

The catch, of course, is that Bravely Default 2’s gameplay loop is a fairly one note affair. As mentioned previously, there isn’t much to Bravely Default 2 besides its combat. Side quests are pitiful affairs for the most part, boiling down to “kill X amount of enemies in overworld” or “run back and forth between two NPCs five times,” and the few notable side quests that do exist are again largely combat oriented. Bravely has a good combat system, but there aren’t many battle systems that can single handedly capture someone’s attention for 40+ hours. Some effort towards expanding the scope of the game wouldn’t have gone amiss, if only to give the combat some room to breathe. Even something as simple as the town building mini-game from BD1 would’ve gone a long way towards adding much needed variety. 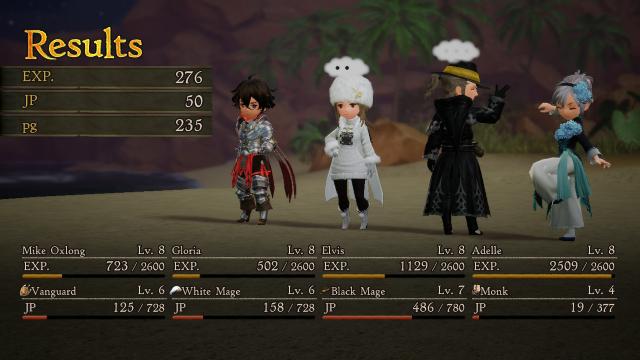 The end result is a game that is still good, but which fails to capitalize on the potential to be great, which is something of a running theme for the Bravely series. Perhaps it’s fitting that both the music and the art fit that description as well. Both are still solid enough; the art is plenty charming and the music is still generally pretty high quality, but they also feel like something of a step down from the prior two titles, with the music especially failing to hit that sweet spot of BD1.

Bravely Default 2 feels so close to putting everything together and being ready to seriously compete for game of the year, but it just missteps at a couple of crucial junctures and falls short of greatness. And that really is the theme of the Bravely series; so close to putting it all together, but falling just short of “great” each time. Bravely Default 2 still winds up my favorite game in the Bravely series largely due to the improvements in writing, and I’d recommend it to nearly any JRPG fan, but the series hasn’t managed to quite hit every note yet.