Turrican? Sure I can.

Gunlord X is Super Turrican in all but name. If you have affinity for the Factor 5-developed games on SNES—or any of the Turrican titles in general—you owe it to yourself to check out this throwback action-platformer. Originally released as Gunlord in 2012 for Neo Geo and Dreamcast(!), Gunlord X is an enhanced port with new bosses, larger levels, improved controls, and reworked difficulty. It's a short game that doesn't stray far from an established script, but it's undeniably fun while it lasts.

The story in Gunlord X reads like something a 13-year-old would write, in the best possible way. It's cheesy and violent and packed with all the sci-fi, macho tropes older gamers feasted on in the 80s and 90s. A crack pilot, Vanessa Gaiden, has gone missing in action. While searching for Vanessa, her husband Gordian Gaiden senses an evil presence: an evil planet lord called The Master who creates and controls evil beings made of steel. In order to stop The Master and his army from enslaving humanity and terrorizing the galaxy, Gordian hops in his planet shuttle and sets off for planet Kairos II. 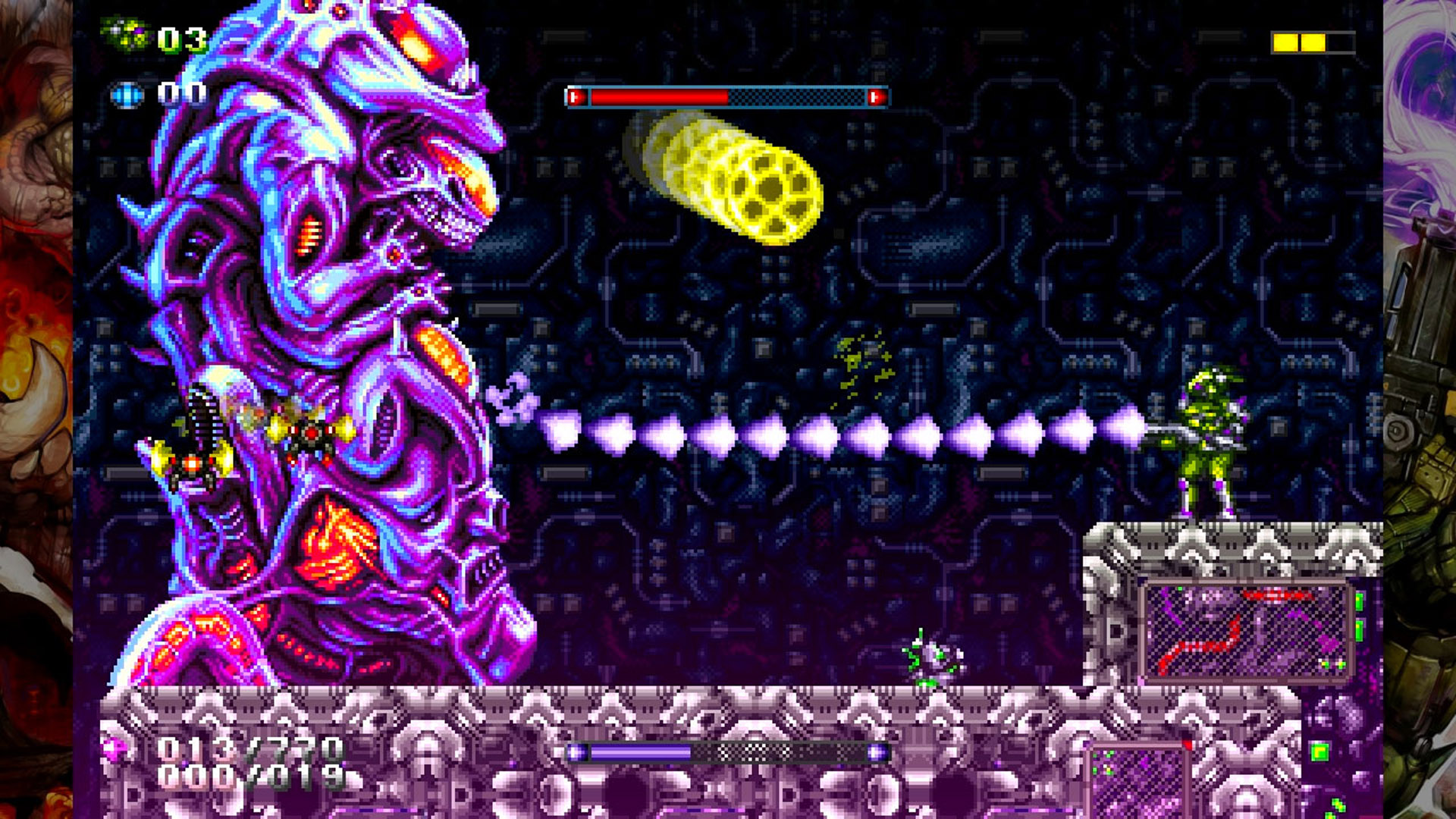 Gunlord X is what you'd anticipate from a game released on defunct consoles Neo Geo and Dreamcast in 2012: a nostalgic arcade action title. Described as a "eurostyle platformer", it's closest in design to the 16-bit Turrican games programmed by Factor 5 (Rogue Squadron, Lair). This is no accident. The small team at studio NGDEV named one of its levels "Factory 5" in a sly nod and even thanked the developer in Gunlord's end credits.

Turrican DNA runs throughout the game. It's a 2D side-scrolling shoot-em-up with non-linear levels, limited lives, grotesque bosses, and action-platforming gameplay. It hosts 11 levels, each filled with swarming enemies, spike pits, acid pools, hidden paths, secret rooms, and lots of weapon power-ups. Overall, it sits somewhere in the middle between the momentum-based action of the Contra series and the methodical open-ended exploration of Metroid. You can press your advantage all you want in Gunlord X, but in some situations a slower, more conservative approach is best.

That's due mostly to NGDEV's inspired method of making Gunlord's sometimes-steep difficulty more flexible. Hidden in each sprawling level are several big diamonds. By collecting every last one in a level, players will permanently increase their number of continues, making survival all the easier. It's a clever way to both reward exploration and accommodate players struggling to succeed with the basic stock of lives and continues. Furthermore, the game offers autosave and level section options, meaning you can attack the campaign one stage at a time—essential for a title with old-school difficulty sensibilities.

The downside to this setup is that some levels are a little too big. As you play through several stages NGDEV will great you with multiple "GO!" and "EXIT" markers—a bit of a crutch to make up for disorienting layouts.

Large levels and hidden collectibles do extend the game's replay value, however, which is meaningful in an adventure that owners could beat in one to three hours. Despite those extras and a New Game+ mode of sorts for speedrunners, don't go into Gunlord X expecting a sizable campaign and a lot of single player content. It's the definition of "short but sweet"—low on content but entertaining and rewarding for a few brief sessions. 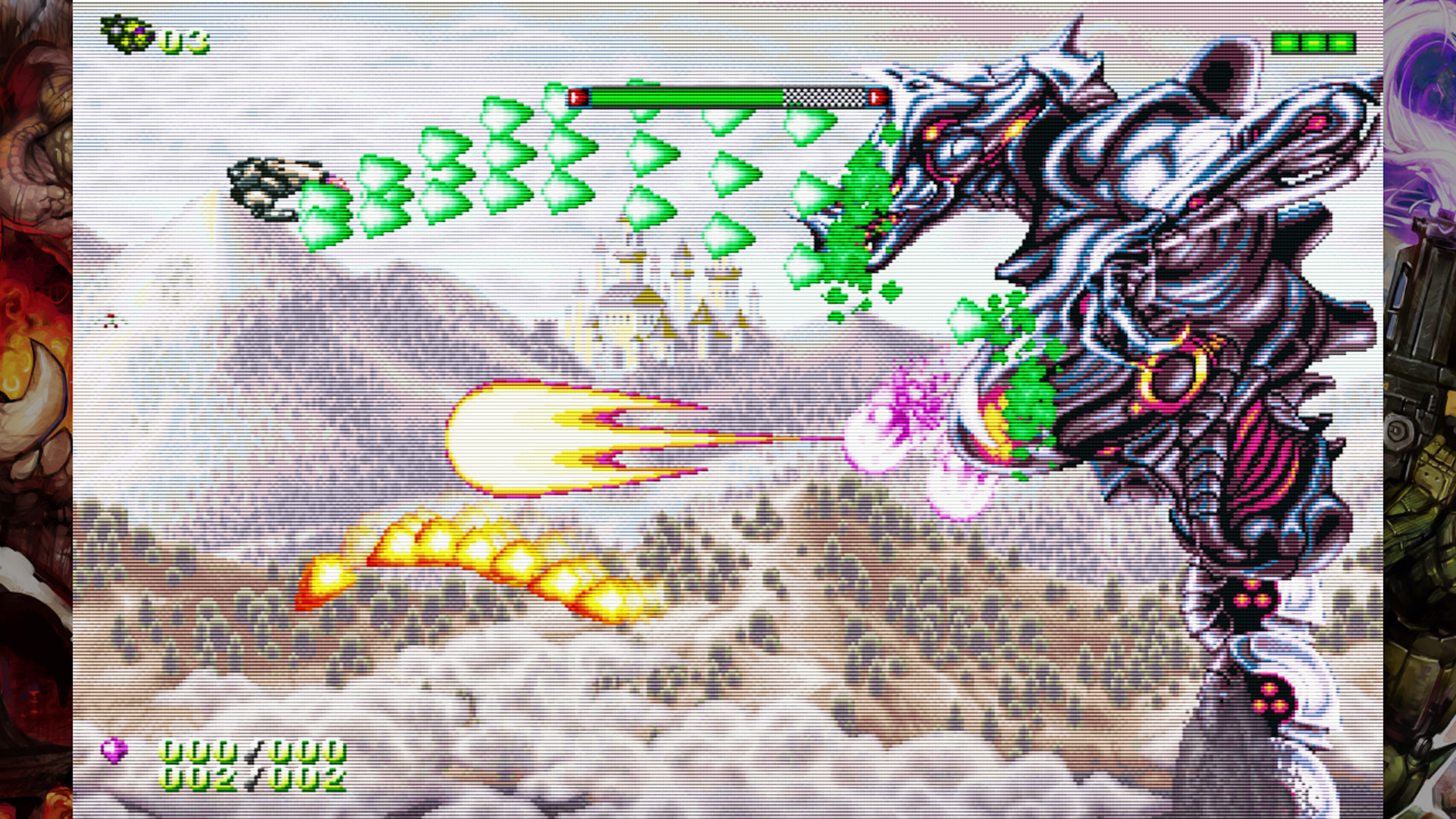 Those sessions are elevated by some smooth controls and satisfying momentary gameplay, both in standard levels and two special horizontal shooting stages. It's great fun to run and gun through waves of oncoming robots, delivering screen-clearing blasts, curling into a ball and rolling under enemy fire, and disintegrating deadly bullets with the "snake beam". The beam, remapped to the right analog stick in this port, is incredibly gratifying to use and probably the single most important weapon in the game. You'll never get tired of using it.

While shooting and movement controls are generally great, the game at times puts up a fuss about platforming. In several instances, you'll need to time your jumps pixel-perfectly—with one foot already off the exiting platform—to land safely. 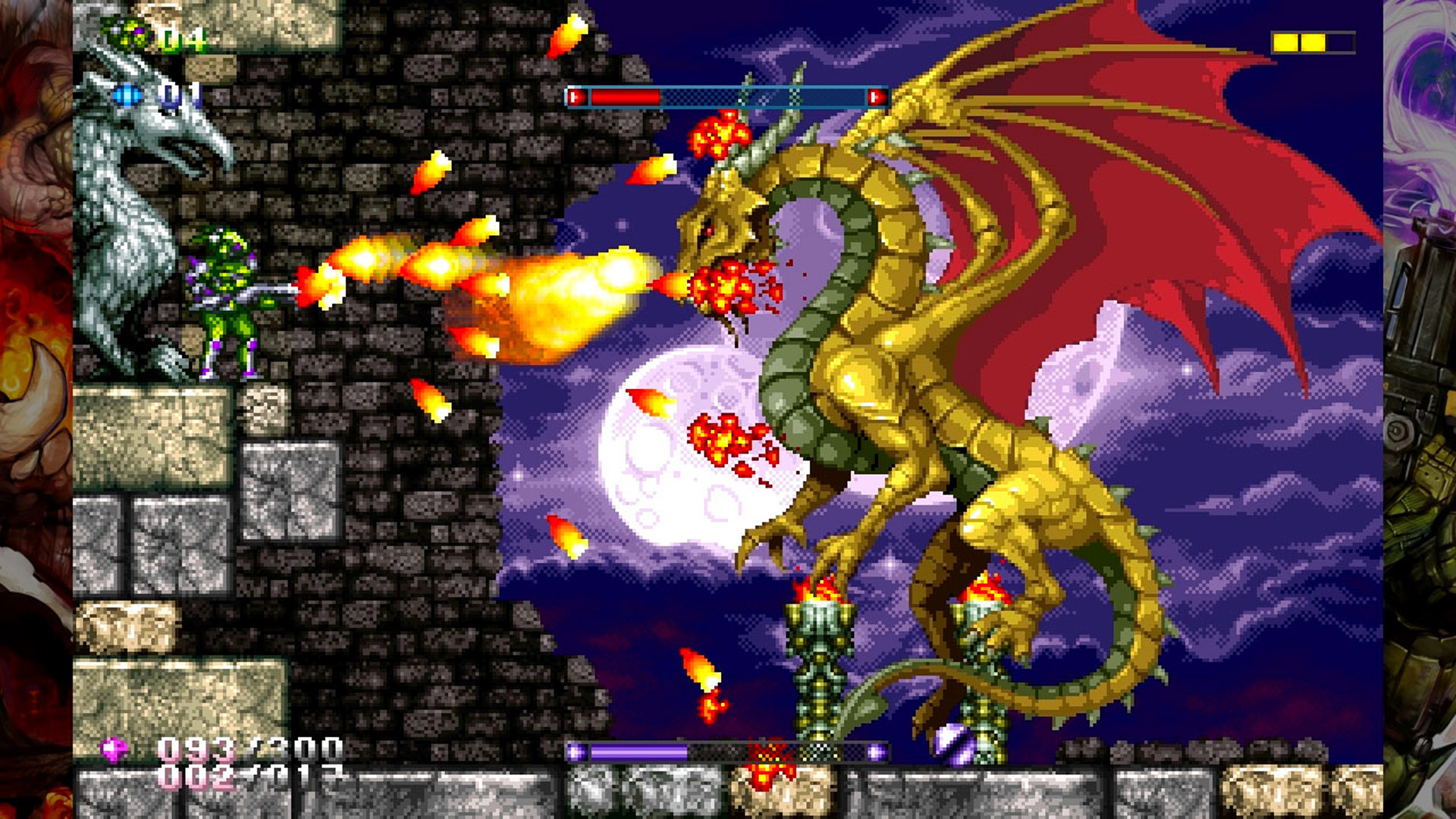 Fans with any fondness whatsoever for the 16-bit assets of Super Nintendo and Sega Genesis will swoon over the 90s-era graphics in Gunlord X. The sprites are rich in detail, and the enemy and stage designs greatly varied. You'll find yourself fighting a giant dragon in a crumbling castle, aerial drones in a factory drenched in acid, and a hulking cyborg over a pool of lava. Electronic music by Rafael Dyll is even better. "Dreamy Ruins", "Steel and Thunder", and "Techno Dungeon" are some of the game's best tracks.

If you've been waiting for a new Super Turrican adventure on modern consoles, wait no longer. Gunlord X might not bear the official license but it certainly qualifies as a spiritual successor to the Factor 5 action-platforming series. It's a worthy successor to boot, due to rewarding gameplay, non-linear level design, and audiovisual assets that will transport you back to the height of the run-and-gun era. A few levels are a tad too ambitious, platforming can be fussy at times, and the package is relatively slight, but for fans of 16-bit arcade action Gunlord X is a no-brainer.